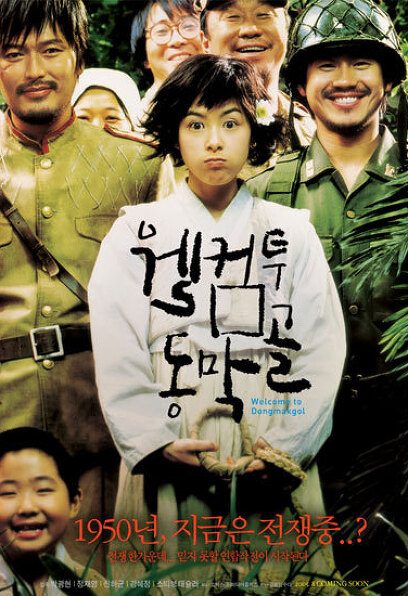 They gathered in one place in the whirlwind of war.
November 1950, at the height of the Korean War…
Dongmakgol, a village nestled among the cliffs of Mt. Hambaek along the stem of the Taebaek Mountains
A P-47D US fighter jet crashed here.
Inside the crashed fighter was an Allied soldier Smith (Steve Tashler).
Yeo-il (Kang Hye-jeong), who lives in Dongmakgol, witnessed this scene and was on her way to deliver the news.
He meets Ri Su-hwa (Jung Jae-young) of the People's Army and brings them to Dongmakgol.
At that very moment, South Korean military Pyo Pyo-cheol (Shin Ha-kyun) and Mun Sang-sang's party, who lost their way after breaking away from their own troops,
As he came to visit the village head of Dongmakgol
The ROK Army, the People's Army, and the Allied Forces gather at Dongmakgol, and the tension is extremely high.

The place where I risked my life to defend, Dongmakgol
Three people who never get along
In front of people in Dongmakgol who have never seen a gun
Grenade, gun, helmet, walkie-talkie, special equipment they had
It was just a strange thing that had no power.
But·
The tension of the war warmed up to Dongmakgol.
The South Korean military, who misunderstood that an American plane that crashed in Dongmakgol was bombed by the enemy,
It was decided to bombard the village intensively.
Check enemy location… ! Current coordinates… Delta Hotel 4045
The military, the People's Army, and the Allied Forces, knowing this fact,
We decided to conduct a joint operation unprecedented in the history of the Korean War.

what happened to them!!!
Were these three people risking their lives to protect Dongmakgol?

100 days and nights like one day…
Perfect reproduction of the imaginary Dongmakgol on 5,000 pyeong of land!

The production of the set of Dongmakgol, the center of the film, was a war from the beginning. Yulchi-ri, Mitan-myeon, Pyeongchang-gun, Gangwon-do, has been searched for more than 8 hours a day for 3 weeks in Gangwon-do, where the stem of Mt. Taebaek is located. Four families lived until a few years ago, and now they have built the ground in a deserted mining village that is not even popular.

The set production, which began production in early September, was hung for 100 days and nights to make a road, and it was only revealed on November 10, when the children were transported. With a production cost of 1 billion won on a site of 5,000 pyeong, 10 houses, 20 rooms, and a perfect village from well to stream were born. Because it symbolized the Guardian, it cost 30 million won to produce it, and it was produced with sincerity for two weeks.

In addition, 300 million won was invested only in purchasing trees to create a rich landscape surrounding Dongmakgol. The perfect village of the 1950s was reproduced by carrying and decorating trees dozens of times with a large truck. He gave birth to summer, and in the face of the blissful reality of a heavy snowfall for the first time in over 100 years, he had to put up with the pain of cleaning his eyes and drying them with a hair dryer.

To express Dongmakgol nestled in the deep and clear mountainside, the staff who created everything new one by one, such as erecting dense bushes untouched by human hands and planting green moss on each rock, did not just film a movie, but were genuine and genuine. By creating 'Dongmakgol', a clear world, he breathed life into the film.

The actors and staff came together to create…
A crystal of passion and emotion <Welcome to Dongmakgol>!

Another spectacle that <Welcome to Dongmakgol> showed was the passion shown by the actors and staff. The actors and staff all moved together with one mind throughout the difficult filming period to capture the desperate battlefield and the moving drama that unfolds in the infinitely beautiful Gangwon-do mountains in the midst of it.

Especially since it is a film set in the Korean War, most of the shooting battle scenes, bombing scenes, and action scenes that are indispensable in <Welcome to Dongmakgol> express moments of extreme tension, exposing the staff as well as the actors to a lot of danger. Bruises and abrasions are the default, and since he used a real gun rather than a model, he was also exposed to the risk of damage to the eardrum due to the firing noise. Because Jung Jae-young is the character who plays the most battle scenes in the play, gunpowder flames were fired towards Jeong Jae-young's face and nearly suffered serious eye injuries. has experienced Kang Hye-jung plays Yeo-il, a pure girl from Dongmakgol who doesn't know what war is. There were many days of falling and scratching while running through the mountains while riding the cliff trail with an innocent look, and to film the dancing scene in the rain, I had to endure the water pouring over my head for over 4 hours in midwinter weather.

In addition, there were a lot of different hardships that I had to do because of the filming that crossed the seasons or the special episode of <Welcome to Dongmakgol>. One summer day, while we were fighting while filming a wild boar hunting scene where we forgot that we were enemies, we had to roll around hugging a dead boar, enduring the smell of rotting all day. Both the actors and staff were wandering in the woods, and in the cold winter, when the venom rose and the first heavy snow and cold wave in 100 years, they cleared the snow and dyed the grass to film the scene set in the fall. While acting while biting on ice, he eventually experienced paralysis of his face. In <Welcome to Dongmakgol>, which was created by sharing a long time of 6 months together, they literally show their sweat and passion.

Spectacle of the Korean War

The perfect battle scene to make the Dongmakgol shine even more!
Complete the spectacle of the Korean War beyond imagination!

It is the pain of the Korean War that makes the innocence and joy symbolized by the Dongmakgol space even brighter. The clear minds of those who shine beautifully in the whirlwind of war are bound to come with a greater impression. Therefore, the efforts of the production team to vividly bring back the feeling of the Korean War were beyond imagination.

First of all, the production team decided to use real guns rather than models for the guns to be used in the battle scenes to enhance the reality of the movie. However, since real firearms are not available in Korea, after a lot of hard work, they obtained permission from the U.S. Department of State and waited for a long time of four months to successfully import them into the country. In this way, 27 guns, which cost a total of 100 million won, were held in the hands of the actors, and nearly 600 kg of gunpowder was used in this final battle scene alone, making it possible to capture the actors with vivid expressions full of tension just like the soldiers who participated in the actual war. could

In addition, the sets of fighters and transport ships that crash in Dongmakgol were also created through thorough research, historical investigation, and precise work. From the marks to the scorched meadows, it was carefully expressed. However, the strong winds of the mountain hills of Gangwon-do blew up the set that had been completely finished overnight, and they had to work all night for two more weeks to create even better fighter wreckage. The wreckage of a transport aircraft discovered before the protagonists risk their lives and plunge into a heart-warming operation was also created with the help of the War Memorial of Korea by referring to photos and models from the Korean War. He showed his enthusiasm for research and production with the staff, and the work of about two months was able to see a wonderful light.

In addition, in <Welcome to Dongmakgol>, the US Allied Forces barracks, who gave the order to bomb Dongmakgol, and the gods of the Han River Bridge bombing, which the ROK Army Pyo Pyo-cheol (Shin Ha-kyun) had to carry out with tears in her eyes, conveyed the vividness of the war as it is, and the innocence of Dongmakgol and the audience's love. It will remain as a great feeling deep in your heart.

<Taegeukgi waving> 700 CG work, which is more than double
The best OST in the life of the world-famous music director Joe Hisaishi!!

The five-month post-production, in which a significant portion of the 8 billion-dollar production cost was devoted, is a measure of the perfection of the film's delicate details. <Welcome to Dongmakgol>, which revived the natural beauty of Korea and the grandeur of the extra-large set after a long filming period of 6 months, is a thrilling and huge battle scene of about 10 minutes in the second half of Korea's beautiful and splendid four seasons. > 2 times the amount of CG work was put in.

The enormous and delicate CG work, which is about 700 cuts in total, captures the absolute beauty of the Korean natural landscape, from a single wind engulfing the village of Dongmakgol, from a single grass to deep cliffs and huge mountain ranges that hide the village. In addition, the CG, which refined the final battle scene, which can be called the most moving and great operation in the history of the Korean War, depicts a breathtaking battle between the 'Dongmakgol Allied Forces', where the hearts of the ROK Army and the People's Army gather, and the US Allied Forces' fighter squadrons. It will decorate the end.

In addition, the brilliant and beautiful music of Jo Hisaishi, a genius film music director, is the most beautiful and heartbreaking melody of his life. According to director Hisaishi Cho, the sound of the 70-member full orchestra was enriched with the will of 'I want to create more beautiful music than <Howl's Moving Castle>'. As if the music tells a story, this OST will captivate the ears and hearts of Korean audiences at once. And the director Hisaishi Cho added a special song at the end of the movie for the Korean audience, showing the director's passionate love and devotion to the movie <Welcome to Dongmakgol>.

<Welcome to Dongmakgol>, which will thrill the theater with the hottest emotion and clearest and coolest laughter this summer, boasts the scale of a movie with its post-production alone, and is preparing to meet the audience as a true well-made movie.