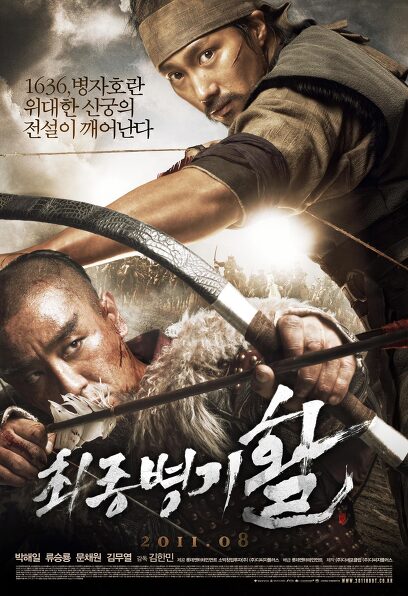 Byeongja Horan, to which 500,000 prisoners were taken away,
In the midst of a fierce war, there was a great shrine that history could not record.

A descendant of a rebel and the greatest shrine in Joseon. He lives only hoping for the happiness of his only blood-related sister, Jain. On Jain’s difficult wedding day, at the happiest moment, Jain and his groom Seogun are taken prisoner by an attack by the elite Qing dynasty army (Niru). Relying on the bow left by her father, Nami advances to the heart of Cheonggun without hesitation.

Nami, who kills the elite Qing troops (Niru) one by one with ghost-like skills, approaches the Qing army’s stronghold one step at a time. Upon recognizing Nami’s mysterious archery skills, Chung’s master Jushinta begins chasing Nami to protect Prince Dorgon and his men. Nami, who uses a howitzer that can’t predict the direction of flight, and Jushinta, who uses a yukryangshi with terrible destructive power, start a war of the greatest bow in history to protect the most precious thing.

If I don’t pierce the enemy’s heart, I die!
The biggest bow war in history, betting on fate, begins!

while the Qing army withdrew
Every time hundreds of Koreans lined up,
Attaching a guard and dragging him out lasted all day.
… …
Among the 600,000 population of Shenyang in the later period
Most of them were Koreans.

In 2011, Korea’s first bow action that pierces the heart is coming!

Time to see through the enemy in 1 second
0.1 second arrow aiming time
0.01 second time to pierce the heart
In the summer of 2011, an intense bow action penetrates the hearts of the audience!
On the happiest day, Nami, a Joseon shrine facing the continent alone to recover her sister who was taken prisoner by the Qing army, and Jushinta, a famous palace in the continent who must protect the prince and brothers from Nami’s mysterious bow skills, this war that ends only by piercing each other’s hearts The main character is the bow. There is no better weapon than a bow in that it is small and light, suitable for a chase, and can deliver the most lethal attack without the enemy’s knowledge. If the existing bow was merely an auxiliary weapon, <The Final Weapon Bow> re-examined the appearance of the bow as a powerful weapon for the first time in Korea. Nami, who has to jump into the enemy camp alone, confuses the Qing dynasty elite unit (Niru) with an unpredictable ‘howitzer’ and 300km/h speed ‘fish meat’, and the longevity of the Qing dynasty elite unit (Niru) starts with the size of Confronted with an overwhelming strongbow. ‘Yukryangsi’, which weighs about six arrowheads alone, tightens Nami’s neck with the tremendous power of cutting off his arms and legs in an instant in front of his eyes. The dynamic bow action shown by the bows with different characteristics will give you the pleasure of a new action that you have never seen before. Director Kim Han-min and art director Chang Chun-seop, who wanted to make the bows in the movie into real ‘weapons’ that would suit the actual battlefield, remodeled traditional bows with the support of the Korean Archery Institute to add reality to the film. In addition, the actors completed intensive archery training for at least half a year, completing a more speedy and spectacular pursuit action. Park Hae-il and Ryu Seung-ryong, as well as Moon Chae-won and Kim Mu-yeol, raised their bows to protect themselves and loved ones in the most critical moments. The charm of each of the four different bow actions will penetrate even the hearts of the audience.

Total production cost of 9 billion! The strongest blockbuster in the summer of 2011!
Among the blockbuster movies this summer, the strongest trick <The Last Weapon: Bow>. The masterpiece, with a total production cost of 9 billion won, is different from the visual aspect. The most notable among them is the costume, which is directed by Kwon Kwon-jin, the costume director, who has shown remarkable activities in various works such as <Detective of Joseon: The Secret of the Helmet Flower>, <The Good, the Bad, the Weird>, and <Cheongyeon>. Dorgon’s battle suit, which is delicately embroidered with gold thread on blue silk to show off the splendor of a prince of the continent, and Jushinta’s costume, which is leather armor with large iron gongs and fur, has a charisma that is different from the costumes seen in previous war movies. boast of It was specially made in So Chau, China to preserve the dignity and majesty of the Manchu people who ruled the world at the time.
And in order to capture the action of the bow that crosses the mountains and fields, almost all filming had to be done outdoors. In addition, it had to be a place untouched by civilization as much as possible so that the scenery of the Joseon Dynasty could be seen. In four months, the distance traveled by the staff alone is close to 10,000 km. The Taean Sinduri Coastal Sand Dunes, which decorate the ending, are registered as natural monuments, so after consultations with the Taean County Office, the Ministry of Land, Transport and Maritime Affairs, the Cultural Heritage Administration, and local environmental groups, it was possible to capture a more tense scene. Mungyeong Saejae Gate 1 was also impossible to film, but with the help of the Cultural Heritage Administration, the filming was successful.
Lastly, it is the words that complete the powerful visual of <The Final Weapon: Bow>. In order to effectively express the Qinggun, a mounted race, the most horses were mobilized among the films shot in Korea. The maximum number is 80 at a time, and the total is 400. <The Last Weapon: Bow> is scheduled to reign as the strongest player in the blockbuster market this summer with its scale and visuals that overwhelm viewers.

The war of heroes hidden behind the tragic history begins!
Thirteen years after the rebellion of King Injo in 1623, the Byeongja Horan, which is recorded as the most humiliating war in the history of Joseon, occurred. As a result, the king of a country bowed his head before the emperor of the Qing dynasty, and the people who could no longer be protected by the country were taken as spoils and taken to the distant Qing dynasty. According to records such as Nagab’s ‘Byungjarok’ and Jeong Yak-yong’s ‘Beergo’, the number is at least 500,000. From this short record, <The Final Weapon Bow> began. Director Kim Han-min, who wanted to create a series that captures the indomitable spirit of the Korean people, created a hero hidden in two incidents: Injo Banjeong and Byeongja Horan. The story of Jingu, who lost everything and lived as if dead after the artificial rebellion, and jumped into the war alone to save her sister who became a prisoner of the Qing Dynasty due to the outbreak of the disease, is probably the story of our people, which history has not been able to capture. In this way, the film resurrected one of the many hidden heroes lost in history to the screen. Director Kim Han-min, who wanted to create a work that is faithful to historical evidence as it is based on an actual historical event, referred to various historical documents that showed the situation at the time, as well as Chinese TV dramas faithful to history to reproduce the Qing dynasty army. In addition, the bow, which occupies a large part of the film, was assisted by the Korean Archery Institute and reproduced Manchu, the language of the Qing Dynasty at the time, with the help of the Korea University Institute for National Culture. <The Last Weapon Bow>, which created another war of heroes hidden in our painful history through thorough historical research, is expected to play an active role as a unique presence in the summer blockbuster market with realistic action and thrill that overturns the image of historical dramas.

An interesting combination of old-fashioned and fresh!
Park Hae-il, Ryu Seung-ryong, Moon Chae-won, Kim Mu-yeol, take responsibility for the perfection of the film with the perfect combination!
<The Last Weapon: Bow> required the power of actors with acting skills and passion at the same time. For this, the stars of the screen such as Park Hae-il, Ryu Seung-ryong, Moon Chae-won, and Kim Mu-yeol gathered together. In particular, Park Hae-il had been assigned to the role of Nami from the screenplay stage due to her relationship with director Kim Han-min, who was with her in <Geuknakdo Murder Case>. Hae-il Park, who is taking on a historical drama for the first time, has been focusing on archery and horseback riding training since last summer like a perfectionist, and as a result, almost all actions were filmed without a double. Ryu Seung-ryong, who plays the role of Jushinta, also prepared for the filming by training in martial arts and studying Manchu to perfectly digest the role of the commander of the Qing Dynasty elite unit (Niru), and externally, he tried a drastic transformation into a pigtail. Moon Chae-won, who has played an elegant and innocent character in [Painter of the Wind] and [Brilliant Inheritance], etc., disassembles into Ja-in, the daughter of a wise military commander, and confronts the enemy with a sword in front of the enemy commander with the spirit of a female lead. Kim Moo-yeol, who challenges the screen following the musical, took on the role of Seo-gun, who lost his bride in one morning, perfectly digesting the emotional acting and dynamic action. In addition, Japanese actor Ryohei Ohtani, who is familiar with us through a certain donut advertisement, Ki-woong Park, who was recognized for his ‘crazy acting skills’ through [Chuno], and Han-wi Lee, a master of licorice acting, appeared and completed a more in-depth drama.