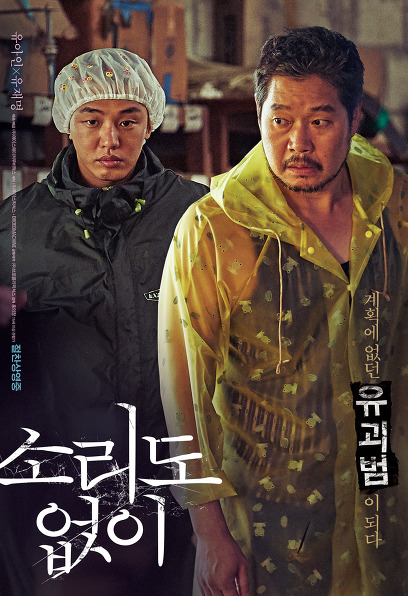 Become an unplanned kidnapper without malice!

But the next day, 'Yongseok' appears as a corpse in front of the two who were trying to return the child, and the two get caught up in an unexpected incident…

Yoo Ah-in, who always tenses the audience with new moves, and Yoo Jae-myung, who has imprinted his presence in each work with a cloth face, met for the first time through the movie <Silent>. The movie <Silent> is the story of two men who unintentionally take on a kidnapped child and get caught up in an unexpected incident because of the kid. Yoo Ah-in and Yoo Jae-myung predicted that they would show a stronger chemistry with a radical transformation into the unique characters of 'cleaners of a criminal organization'.

First, Yoo Ah-in, who is writing a unique character genealogy regardless of genre through various works, will show the most intense acting transformation in his filmography history as 'Tae-in', a silent scavenger of a criminal organization. 'Tae-in', who for some reason does not say anything, is a person who accidentally gets caught up in an unplanned crime due to a request, and everything is shaken up. Yoo Ah-in takes on the silent 'Tae-in', and for the first time in her acting life, she expresses all emotions with delicate eyes and detailed gestures without a single word throughout the running time, completing a character that is captivating. In particular, for the life of 'Tae-in', who works diligently and diligently under a subcontract of a criminal organization, he not only shaves his head, but also tries to change his weight up to 15 kg, and catches the eye as Yoo Ah-in, which he has never seen before. Director Hong Eui-jeong said, "The more we talk about the work, the more solid the image of 'Tae-in' is."

Next, Yoo Jae-myeong, who has a heavy presence in each work by working on screens and CRTs, takes the center of the play as ‘Chang-bok’, a faithful scavenger of a criminal organization. Yoo Jae-myung, who plays the role of 'Chang-bok', who handles the case more faithfully and diligently than anyone, with helping crimes become a daily routine, wears shabby clothes, a familiar tone, and limps as a timid criminal organization cleaner in his own clothes. It was vividly expressed with amazing character digestibility. In particular, in contrast with 'Tae-in', who does not speak, he balanced the play with 'Chang-bok', which talks more than actions, again realizing his strong acting skills. Director Hong Eui-jeong said, "Actor Yoo Jae-myung's analysis of his character and his sophisticated expressive power are really amazing," and praised it with admiration.

Actors Yoo Ah-in and Yoo Jae-myung, who performed the best acting ensembles like 'Tae-in' and 'Chang-bok', who fill each other's shortcomings, sometimes like brothers, sometimes like father and son. With an intense acting transformation, he plans to captivate the audience by showing a new face that has never been shown before.

A kid who accidentally takes on a child makes him a kidnapper in an instant
A clash of fresh and unique characters and ironic events!
Differentiate from existing criminals!
The movie <Silent> is centered on ‘Tae-in’, who does his best to do his job diligently and diligently while taking care of a criminal organization as a side job for a living, and ‘Chang-bok,’ who knows exactly his role in a given environment and is faithful to his faith. The story unfolds with Director Hong Eui-jeong said, "The story started from the idea that humans change for their own survival in an ambiguous environment between good and evil." 'Taein' and 'Changbok' in <Silent> live their daily lives faithfully by their own standards under their own survival conditions rather than objective moral standards in a given environment and choose to change in those conditions. This represents our sense of insensitivity in living our daily lives faithfully, withholding judgment of good and evil in a complex reality.

The irony of the film occurs in a situation in which sincere and good people who live cooperating with crimes but lead a peaceful daily life in their own way become 'real criminals' as they take on the actual kidnapped child. <Silent> reminds us of the numerous judgments and choices we face in a complex modern society where it is difficult to define what is right or wrong, and maximizes irony with a routine tone that cannot be seen in existing crime films, thereby attracting prospective audiences. gives a fresh shock to

In this way, the movie <Silent> offers a new kind of fun that is different from the stories that dealt with crime through the unpredictable story of the novel and ironic situation that can be felt from the unique character.

The intense debut film of new director Eui-Jeong Hong, recognized by the film festival!
A unique mise-en-scène that subverts the genre, a new style!
There is a reason for choosing Yoo Ah-in and Yoo Jae-myung!
Director Hong Ui-jeong, who directed the movie <Silent>, received favorable reviews for his extraordinary directing skills through his sci-fi short <Habitat>, which was presented at the 23rd Busan International Film Festival Wide Angle – Korean Short Competition Section World Premiere, and quickly emerged as a promising star in Chungmuro. . <Silent>, director Hong's first feature film debut, was selected as one of the 'Biennale College Cinema TOP12', a project that supports new directors and producers in the 73rd Venice International Film Festival, and has already been recognized for its solid screenplay and workmanship. have received

Director Hong Eui-jeong tried to find a balance through a unique mise-en-scène method of unraveling heavy and dark materials. In the scene where 'Tae-in' and 'Chang-bok' encounter the kidnapped child 'Cho-hee' for the first time, the overall background color is set to pink, and the most frightening moment from 'Cho-hee's point of view is expressed in warm and bright tones in warm and bright tones. It shows the ironic situation that can come even in warm daily life. The sense of disparity that arises when adults who simulate a cruel situation enter a space designed for children adds to the suction power of the play with the unique style of Silent. Such new attempts and unique characters that transcend genres were enough to capture the hearts of Yoo Ah-in and Yoo Jae-myung, and it is expected that they will create a style of film that has not been seen in existing Korean films.

The unique charm of <Silent> that comes from the unique mise-en-scène, strong character setting, and ironic story structure that has never been seen easily raises the expectations of fans waiting for the movie.