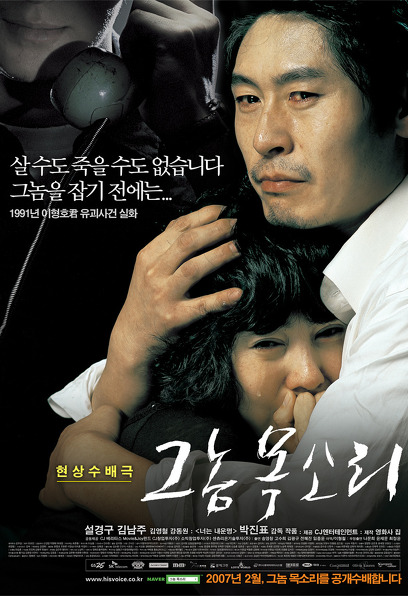 The 1990s were a time when violent and heinous crimes continued to the point where war on crime was declared. One day, Sang-woo, the 9-year-old son of news anchor Han Kyung-bae (Sol Kyung-gu), disappears without a trace, and a bloody threatening phone call from a kidnapper (Kang Dong-won) asking for 100 million won begins. After their wife Oh Ji-seon (Kim Nam-joo) reports, a dedicated detective (Kim Young-cheol) is attached to the couple, and a secret investigation headquarters is set up and even forensic investigation is mobilized. instruct how The only clue to the kidnapper whose identity is not revealed through elaborate methods is the voice of a threatening phone call. He had a cultured way of speaking, but his voice was terribly cold, as if he had no emotions. For 40 days or so after the incident, the parents, ignoring Sang-woo's life or death, cling to threatening phone calls. Desperate feelings gradually turn into anger, and finally, Kyung-bae Han instructs him how to connect with him and declares a head-to-head confrontation to retrieve his son…

The movie 'The Voice of the Gnome' is based on the true story of the 'Apgujeong-dong Lee Hyeong-ho Kidnapping and Murder Case' that shook the world 15 years ago. The tragic case of 9-year-old Hyung-ho Lee, who was abducted in Apgujeong-dong, Seoul on January 29, 1991, was found dead 44 days later in the Han River drainage canal. It was a big topic at the time that the method was sophisticated and intelligent enough to escape the pursuit of the police. This case, which was called the 3rd unsolved case along with <The Frog Boy Case> and <The Hwaseong Serial Murder Case>, was a rare scientific investigation at the time. The statute of limitations expired in January last year without even knowing the outline. Director Park Jin-pyo, who felt shock and anger while directly covering this incident as an assistant director of the 1992 SBS documentary <I Want to Know>, decided to re-illuminate the film so that our society would not easily forget or tolerate such a tragic incident. . The faction film <The Voice of the Gnome>, which will contain a sincere drama based on a true story, is expected to create a great social impact this winter by simultaneously embodying cinematic fun and social messages like <Memories of Murder> and <Silmido>.

A human drama depicting family love with deep emotion
In existing domestic and foreign films such as <Vengeance is Mine>, <Princess Aurora>, <Ransom> and <Man on Fire>, the subject of kidnapping is a suspense or thriller genre that emphasizes dramatic tension, such as confrontation with criminals, brain battles, and revenge on the kidnappers. has been discussed However, the kidnapping of <The Voice of the Gnome> is not a genre subject, but merely a background device to emphasize the deep family love. The movie is a human drama that tells the story of a heartbreaking family love through the despair and anger of parents who have their children taken away by a kidnapper overnight and are subjected to persistent threats. The director insisted on casting actors who have children and can represent their parents so that the audience can focus on the sad love of their parents rather than the incident. In fact, the lead actor Seol Kyung-gu and Kim Nam-joo, who are fathers and mothers of one child, is expected to touch the hearts of the audience by realistically portraying the heartbreaking feelings of parents who endure day-to-day misfortunes by hanging on to a thorn of hope.

Faceless protagonist, voice – A new attempt unprecedented in the history of Korean cinema
The movie <The Voice of the Gnome> is a film with a unique composition that sets as another main character the 'voice of a threatening phone call', a clue to the real criminal who has not yet been caught. The culprit character 'Gnome' casts even a star actor named Kang Dong-won as the main character with the second largest amount of dialogue in the movie, but except for exposing the silhouette in some scenes, he appears only with a phone call. In 'Lee Hyeong-ho Kidnapping Case', which became the motif of the movie, the voice of the threatening phone call is a key clue to the kidnapper. The director, who wanted to reveal the clues to the real criminal through the movie, reconstructed all the other characters and episodes into a film, but maintained objectivity based on real events thoroughly only about the criminal. Just as the lines and tone of 'Gnome' almost match the contents of the actual criminal's threatening phone call, like the real criminal who never revealed his identity, 'The Guy' in the movie had to be a faceless criminal. It is a great challenge for an actor to perfectly express a character with only his voice. Kang Dong-won, who showed extraordinary enthusiasm by appearing on the scene even in scenes where he did not appear in person, and matching the dialogue with the other actors, realistically reproduced the heartless voice of a real criminal who melted his parents' affection with a persistent threatening phone call, giving the audience a 'culprit'. I want to hold on to it.

Bounty to catch the real culprit

Drinking alcohol and not getting drunk
The guy who killed Hyungho is still alive somewhere
I can't breathe at the thought of walking around.
I haven't forgiven him yet, but who has forgiven him…?

According to Article 249 of the Criminal Procedure Act of the Republic of Korea, the statute of limitations for a crime punishable by death is 15 years. . However, Hyeong-ho's father, who had to bury his young son in his heart one day, screams that no one can forgive 'the guy' who took his life. The movie <Voice of the Gnome>, which started out of sympathy for his father's heartbreaking feelings, advocates a 'wanted bounty' to catch the real criminal, and pursues a social function beyond simple commercial films. To naturally evoke the social issues of 'child kidnapping' and 'the statute of limitations' with a moving drama, and to solve the case of Lee Hyung-ho, whose statute of limitations has expired, through public cooperation by spreading the clues to the real criminal. This is the true intention of the movie <The Voice of the Gnome>.

A spectacular meeting between a box office director and three star actors, the most anticipated film of 2007
The next film directed by Park Jin-pyo of <You Are My Destiny>, which has gathered the highest audience in Korean melodrama history, Seol Kyung-gu, an actor who has mainly taken on thick acting, a different fatherhood acting challenge, and Kim Nam-joo's ambitious screen move, who was interested in choosing a comeback after marriage and childbirth, And actor Kang Dong-won's acting as a villain, who is in full swing with his mature acting skills shown in the movie <Our Happy Hour>. <The Voice of the Gnome> is regarded as the most anticipated work of 2007 with the brilliant and fresh combination of the box office director and star actors.

Behind the casting of Seol Kyung-gu, Kim Nam-joo, and Kang Dong-won, the best stars of the time, there is the trust of director Park Jin-pyo and the three actors that the most important thing in a movie is sincerity. Actor Seol Kyung-gu, who was moved by director Park Jin-pyo's first feature film debut <It's Okay to Die>, confirmed that he would appear in the movie after only hearing one line of the story of <The Gnome's Voice> a few years ago. > was chosen as a comeback work without hesitation. Here, the best star Kang Dong-won also joined as an opportunity to show a meaningful performance regardless of the villain image. Their sincere cooperation foreshadows the birth of another well-made box office this winter.