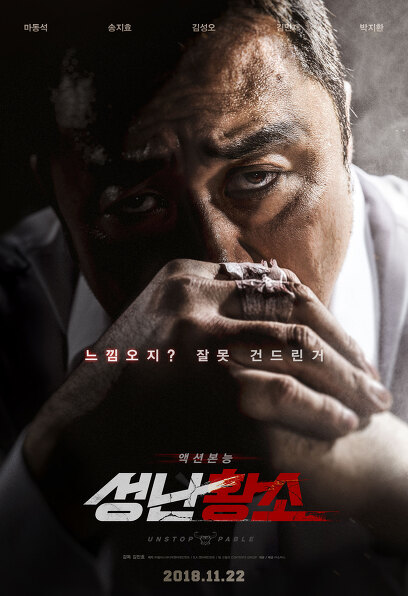 Dong-cheol (Ma Dong-seok) lived a healthy life by distributing dried fish at the fish market, freeing from the harsh past.
One day, his wife Ji-soo (Song Ji-hyo) is kidnapped and reports to the police, but her whereabouts are unknown.
And a call from the kidnapper (Kim Seong-oh) from Dong-cheol!
Rather, he makes a shocking offer to give Dong-cheol a large amount of money in return for kidnapping Ji-soo, and Dong-cheol explodes and starts moving to save Ji-soo… !

don't you feel I touched it wrong

In November, Angry Bull is a thrilling action movie in which 'Dong-cheol' (Ma Dong-seok), who changes terribly once he gets angry, rushes infinitely to save his abducted wife 'Jisoo' (Song Ji-hyo). In the movie, 'Angry Bull' Ma Dong-seok, Song Ji-hyo, Kim Seong-oh, Kim Min-jae, Park Ji-hwan, etc. In particular, the character 'Dong-cheol', played by Ma Dong-seok, is one of the strong factors raising expectations for 'Angry Bull' because it is a concentrated bare-fist action that only he can digest.

Ma Dong-seok was loved by many audiences for his signature actions such as <Train to Busan>, <Crime City>, and <Along with the Gods – Cause and Kite>. In particular, Jason Bloom, CEO of famous Hollywood producer 'Bloomhouse', said, "I recently watched <Train to Busan>. Dongseok Ma is Dwayne Johnson from Asia. I definitely want to work with him.” Like this, Ma Dong-seok, who is stronger than the zombie of Train to Busan, which even captured Jason Bloom, is drawing attention to perform an upgraded action in <Angry Bull>. The action scenes in <Angry Bull> are enough to double the excitement and exhilaration of the audience, where the place and action get bigger and bigger as the operation to rescue his wife 'Jisoo' is repeated. Ma Dong-seok said, “Martial arts director Huh Myung-haeng, who often worked with <Train to Busan> <Crime City> and <Along with the Gods – Causality and Kite>, took over as the martial arts director for <Angry Bull>. He knew a lot about my strengths and weaknesses through various works, so he created nuclear fist action scenes that were specialized for me.”

As such, <Angry Bull>, which will present the climax of the action of Asian Dwayne Johnson and Ma Dong-seok, will relieve the stress of the audience in November.

'Sweet and bloody couple chemistry' Song Ji-hyo,
'Rage Explosion Angry Chemie' Kim Seong-oh,
And even the 'fighting comic chemistry' Kim Min-jae & Park Ji-hwan!
A lineup of actors that will provide both action and fun!
The movie <Angry Bull> shows off the extraordinary chemistry between Ma Dong-seok, his wife Ji-hyo Song as Ji-su, Kim Seong-oh as the kidnapper Ki-tae, and his duo Kim Min-jae and Park Ji-hwan to find the kidnapped wife, which doubles the fun of the movie. make it

First of all, Song Ji-hyo is stronger than 'Dong-cheol', but she transforms into a wife who loves her husband only at heart, and presents 'sweet and bloody couple chemistry' with Ma Dong-seok. He is the one who made the bull-like 'Dong-cheol' and shows off a bolder image than 'Dong-cheol' and shows off a sweet couple chemistry full of vitality with Ma Dong-seok. Not only that, but Song Ji-hyo also surprised the martial arts team with a passion for action comparable to that of Ma Dong-seok. Martial arts director Huh Myung-haeng praised him, saying, "Actress Song Ji-hyo portrayed a strong character as it is, and in the play, the scene where the kidnapped Ji-soo struggles to escape was also filmed without a stand-up, so I was surprised." The character 'Jisoo' in <Angry Bull>, which is sweet and bloody, is expected.

'Kitae', who kidnapped 'Jisoo', is played by Kim Seong-oh and presents 'anger explosion angry chemistry' with Ma Dong-seok. Kim Seong-oh plays a new concept kidnapper, Ki-tae, in <Angry Bull>, constantly harassing Ma Dong-seok and raising his anger gauge. Although he is a kidnapper, he plays a character with a twist setting that gives money to the victim's family, and he is going to add a strong villain filmography following the character of 'The Uncle' and 'Jongseok' by repeating the reversal acting with a smiling mouth but cool eyes. Director Kim Min-ho said, "Just as the setting of giving money to 'Dong-cheol' to become a kidnapper well explains his character, I wanted 'Kitae' to show a mixture of madness and flexibility. Rather than anchoring, I wanted it to be an unpredictable character,” he said, unbalancing 'Gitae', continuously causing Ma Dong-seok's anger.

Last but not least, Kim Min-jae and Park Ji-hwan, who will help Dong-cheol, who is struggling to find 'Jisoo', will show 'comic chemistry' by helping him. First of all, Kim Min-jae takes on the role of 'Chief Gom', the ever-changing president of Heungshinso, and catches the attention of the audience with his sensible and emotional appearance. Park Ji-hwan is a junior of 'Dong-cheol', 'Chun-sik', and shows another perfect collaboration with Ma Dong-seok following 'Crime City'. The combination of these two adds to the fun that cannot be missed in the movie with the charm of a comic combination that makes you laugh just by being together. Director Kim Min-ho said, "The scene was brought to life well, like a battle over who is the funniest. But we didn't try to stand out from each other, but we adjusted the appropriate level according to the flow of the movie."

The movie <Angry Bull>, where the actors' diverse chemistry is expected, will provide action and fun.

The production team of <Crime City> unite!
Martial arts director Huh Myeong-haeng, Nam Ji-soo, costume & make-up manager,
Veteran production crew, including editor Kim Seon-min, are all out!
This fall, another exciting action movie will be born!
The movie <Raging Bull> was completed by the reunion of the strongest producers who created <Crime City>, a crime entertainment action movie that heated up theaters in October 2017. The exhilarating collaboration of those who led the box office of <Crime City> by demonstrating the perfect action breath creates a more realistic and energetic action in <Raging Bull>, providing a spectacle that perfectly relieves the stress of viewers.

First of all, the most important 'action' of this movie was directed by Martial Arts Director Huh Myeong-haeng, who has been working with actor Ma Dong-seok for a long time in various works such as <Crime City> as well as <Train to Busan>. He created the action style of Ma Dong-seok-pyo by showing perfect chemistry with him once again through the movie <Angry Bull>, which will awaken the action instinct. The combination of space and action in this film is also noteworthy. The action sequences that exquisitely utilize the spatial characteristics of open spaces and dangerous elements such as gambling halls, Ki-tae's hideout, and overpasses are added to the performances of the actors who threw their whole bodies, which doubles the pleasure. Martial arts director Huh Myung-haeng also said, "We continued discussing the parts that could bring more reality to each space, and we designed the action accordingly," he said.

Also, costume and makeup, one of the other points to watch in <Angry Bull>, was taken by Nam Ji-soo, who was in charge of makeup for <Crime City>, and played an active role in making full use of the charms of the characters. He showed affection for the work and fantastic teamwork enough to say, "It was very comfortable as a team that worked together on <Crime City>, and we got along well, accepting each other positively about new ideas." In this perfect breathing, she said, "Actor Ma Dong-seok made all his costumes based on spandex so that he could be comfortable in action, and actor Kim Seong-oh's role of 'Ki-tae' showed a unique setting and sharp image living in his own world. I mainly made colorful suits to give it to them,” he said, expressing the characters’ personalities with costumes and make-up that can bring out the atmosphere and action of the characters with strong personalities. In addition, he put a lot of effort into bringing out the reality of the drama to the maximum and bringing out the details of <Angry Bull>.

Lastly, Kim Seon-min, editor of <Crime City>, which doubles the taste of action, joins forces to present the end of the nuclear fist action. Editor Kim Seon-min completed various group actions one by one by implementing action scenes that continued without a break through rhythmic editing. The action unique to <Angry Bull>, which was created by his hands after such delicate work, is drawing attention as it will focus on Korean action movies and add to the fun of watching the movie.

In this way, the quirky action of <Angry Bull>, which utilizes the realistic charm of the production team of <Crime City>, which opened a new horizon of action in Korea, will open a new era of action movies armed with attractions that cannot be missed.

Efforts of the producers over a long period of time!
The creation of a space that adds depth to the action!
In <Angry Bull>, the space where his wife 'Jisoo' was kidnapped, 'Gita's Hideout', is a place where action scenes that decorate the climax of the movie are lined up, and the key was to find a place that could capture them vividly. Director Kim Min-ho wanted it to be a space with a special color as much as Ki-tae's colorful suit to complete a space that can show the character of Ki-tae. Accordingly, the art team of <Angry Bull> began to explore the country for a long time to find a suitable place for a hideout that could fully show it. As a result, they found a motel that had not been operated for a long time and completed a dramatic space through extensive construction. Could.

In addition, the 'gambling room', where Ma Dong-seok, Kim Min-jae, and Park Ji-hwan, went to find clues about the vehicle that hijacked 'Jisoo', made the set as a space where Ma Dong-seok's 'nuclear fist action' can be maximized. In addition, the production team hunted places that considered action, such as selecting 'Overpass' to be seen as a breathtaking space that makes the audience sweat. Producer Park Jun-sik said, “I wanted it to be a space that could add a sense of depth to the action. In addition, Art Director Kim Hee-jin thought a lot about what kind of device to put so that the spaces would not look boring. ” he said.

Various spaces in the movie were created with the sincerity of the producers to maximize the action. This is the reason why we have no choice but to pay attention to the movie <Angry Bull>.