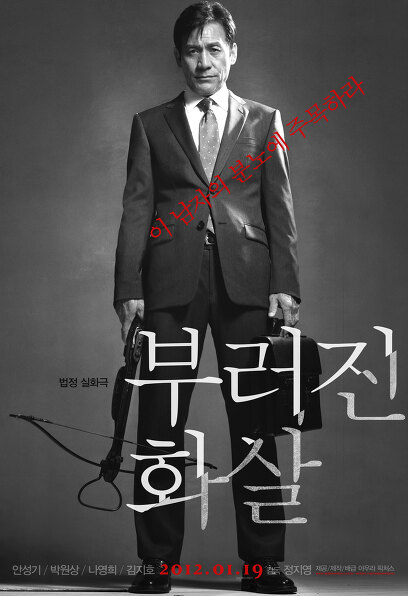 Pay attention to this man's wrath!

Professor Kim Kyung-ho was unfairly dismissed after pointing out errors in a math problem in the university entrance exam. After losing the lawsuit to confirm his professorship and the appeals court dismissed without justifiable reasons, he went to the judge in charge and demanded a fair trial and threatened with a crossbow. Testimony that a violent fight, the judge's bloody shirt, a 2cm cut in the abdomen, and a broken arrow were collected… Soon after, the ramifications of the case spread, and the judiciary announced that it would severely punish the suspect by defining Kim Kyung-ho's actions as a challenge to the rule of law and 'terrorism'.
However, the trial, which seemed to proceed quickly, continues to be difficult, as suspect Kim Kyung-ho claims his innocence, saying that he never actually shot an arrow. Court with no concessions, conflicting statements! The decisive evidence 'broken arrow' is unknown…
Lawyers give up arguments one by one due to Kim Kyung-ho's fiery personality, who adheres to the principle of non-compromise and does not hesitate to speak harsh words to the judge, but the trial begins to come alive with the appearance of the last appointed self-proclaimed 'yangachi lawyer' Park Jun… .

The story of a man who confronts a world without common sense with principle begins!

The movie "Broken Arrow" is based on the so-called "crossbow terror incident" that shook the world five years ago.
It is a cinematic re-creation of the characters and episodes.

The unchanging insight of 'Jung Ji-young', a middle-level director who returned after 13 years!
Born as a problem work to open 2012!
The movie <Broken Arrow> is a work that announces the return of 'Jung Ji-young', a representative director of Korean cinema in the 90s, and has great significance in that it connects the lines of middle-aged directors in their 60s who wished to have no work in the Korean film industry. Director Jung Ji-young, who has delivered a social message through film by releasing works that dealt with the problems of our society in depth with <Nambugun> as the starting point, also stands from the perspective of the underdog through <Broken Arrow> and protects the establishment of the group. It pinpoints the harmful effects and captures the critical theme of society.
In particular, <Broken Arrow> shows another evolution of the courtroom drama in that it handles the problems of our society sharply while maintaining a witty point of view. The ironic moments in which the defendant drives the judges to a corner with a strict interpretation of the law give the audience a sense of sympathy, anger, and even exhilaration. The film Broken Arrow, a film that meticulously weaves the sincere description of a story recreated based on real events and cinematic fun, is a problematic work by director Nojang that makes us think again about the common sense and principles of our society today, along with its achievements as a realism film. am.

Director Jung Ji-young and actor Ahn Sung-ki meet for a reason for the first time in 20 years!
<Southern Army>(1990), <White War>(1992) and <Broken Arrow> (2012)
Director Jung Ji-young, who represents Korean cinema in the 1990s, and Ahn Sung-ki, a national actor in name and reality, met again after 20 years. Their first work together, <Nambugun> (1990), is a great anti-war film depicting the tragedy of war and ideology using the taboo 'partisan mountain' as the subject matter, and it is evaluated as a meaningful work that broadens the subject matter of Korean films to a new level. . White War (1992), which became a hot topic for dealing with the Vietnam War from a Korean perspective, became the first Korean film to win Best Picture and Best Director at the Tokyo International Film Festival, one of the world's seven major film festivals at the time. As a cinematic comrade who has pursued both workability and popularity as well as issues outside of cinema with such a strong social drama, <Broken Arrow> is an inevitability of a work relationship.
Ahn Sung-ki said, "The social message through the film is important, but I like the film's composition and fundamental perfection." He said, "It was difficult at the time, but it was meaningful. There will be,” he said with anticipation. In addition, he showed special affection for the tireless activities of a director in his 60s, saying, “I wish director Jung Ji-young would make more films on the set.”

“The character fighting for fundamental right and wrong rather than favorable judgment was new and interesting.”
Ahn Sung-ki, a national actor, transforms into a strict professor armed with uncompromising principles!
National actor Ahn Sung-ki shows the best acting in the movie <Broken Arrow> as a strict and stubborn character. Kim Kyung-ho, a character who dramatized a real person in the crossbow case, does not tolerate even an inch of compromise, and instead of pleading for mercy in court, he is a peculiar character who scolds judges for not adjudicating according to the law. The overly conscientious and stubborn character met with the warm image of an actor named Sung-ki Ahn, bringing a synergy effect that adds to his humanity.
The audience follows Kim Kyung-ho's emotional lines, who make confident remarks and actions against a large organization called the judiciary. The moment he is treated unfairly, he is gripped with heartbreaking anger and afterglow, and the moment he embarrasses the judges with logical arguments, it is exhilarating. will be able to taste Ahn Seong-gi said, "I played the character of Kim Kyung-ho, who has a very strong conscience and pride as a professor, as a person who can give a soft and reliable feeling when soft."