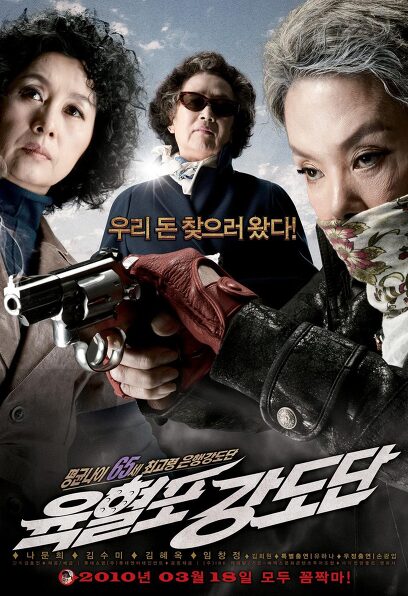 Are we stealing money like gold?!
The three grandmothers who are lifelong friends, 'Jung-ja' (Na Moon-hee), 'Young-hee' (Kim Su-mi), and 'the believer' (Kim Hye-ok), decide to go on a trip to Hawaii, the last wish of their lives, with the money they worked hard for 8 years. An unbelievable situation happens to the three grandmothers who go to the bank to deposit money for their travels, even after their bloated dreams are short-lived. That's when the bank robbers came. Without a second thought, the robbers relentlessly steal their money and run away, and when he comes to his senses, the money is already gone.

How about we try it?
To make matters worse, the bank said it could not compensate for not stamping the deposit. Just before their lifelong dream of traveling goes to waste, the three invincible grandmothers come up with an unusual plan. If the bank won't give them back, they will rob the bank and get it back.

We're here to get our money!
The three grandmothers who decide to become a bank robber threaten Jun-seok (Lim Chang-jung), a professional bank robber, and begin to learn the secrets. The intrepid, average-age 65-year-old grandmothers begin their special attack training for bank robbers, and finally they transform into masked robbers with pistols and take the bank by taking hostages.

Will they be able to safely rob a bank and steal 8.37 million won and leave for Hawaii?

The best entertainment movie that will be responsible for the spring of 2010 is coming!
Armed with laughter and various attractions!

The movie <Blood Blood Robbers>, which depicts the oldest bank robbers with an average age of 65 years old, gives a pleasant pleasure as unexpected situations continue unabated. In addition, a variety of exciting attractions such as the tense bank robbery scene, the thrilling hostage play, and the motorcycle escape scene across the city, reminiscent of reality, add to the enjoyment unique to entertainment movies. Here, the fantastic performances of Korea's top acting masters, Na Moon-hee, Kim Su-mi, Kim Hye-ok, and Lim Chang-jeong, are another reason to expect <The Six Bloody Robbers>. Armed with a fresh storyline, exciting spectacles, and the best casting, the first comedy film of 2010, <The Six Bloody Robbers> is scheduled to visit the audience as the best entertainment movie to be responsible for this spring.

The oldest bank robbers with an average age of 65 are coming!
Captivate with fresh and new materials!
<Yuk blood robbers> stimulates the interest of the audience with the fresh material that grandmothers become bank robbers. Breaking away from the images and settings of the passive and compassionate grandmothers portrayed in Korean movies and dramas, she creates unique humorous codes by placing grandmothers with unique and realistic characters in the unexpected situation of bank robbery. How would people react if the grandmothers turned into robbers and robbed the bank, will the grandmothers be able to point their guns and pick up bundles of money, how will the negotiations with the police proceed, will the hostages be afraid of them, and will they succeed? It will arouse curiosity. In addition, unexpected situations that overturn the stereotype of the bank robbery and realistic and delicious lines will serve as a differentiated laughter point, providing pleasure.

Welcome the best comedy queens of Korea!
A fantastic combination of Na Moon-hee, Kim Su-mi, and Kim Hye-ok!
<Yuk blood robbers> is attracting attention with the best casting that is hard to come out again. The mere fact that Korea's leading comedy queens Na Moon-hee, Kim Su-mi, and Kim Hye-ok appear in one movie guarantees the fun of the movie. Na Moon-hee, a national grandmother with a warm and benevolent image, is going to transform into a robber's leader and show a tough image, while Kim Soo-mi is proud of her reputation as the original halminem with her unique fatal aegyo and thick, rapid-fire abusive language. Kim Hye-ok, who usually has a feminine appearance, looks weak, but has transformed into a strong gunman and tried a different acting transformation. As if they were masters of acting, the three actors showed off their strong acting chemistry by coming up with ideas for lines and situations on the set and matching the movements. In the second half of the filming, the staff were surprised by the three people's breathing so well that they didn't even need words. You can look forward to the realistic and perfect acting breathing that they will unfold.

A charismatic leader, an action leader, a sniper, and even a chaotic former robber!
A delightful feast of unique characters!
Boasting a splendid cast of Korea's best actors Na Moon-hee, Kim Su-mi, Kim Hye-ok, and Lim Chang-jung, <The Six Blooded Robbers> is a film that will be remembered as a unique combination of characters. These characters are unique and at the same time, they evoke more empathy without losing the familiarity and realism that we can easily see around us. The courageous 'Jung-ja' (Na Moon-hee), who has never done anything since she was young, and 'Young-hee' (Kim Su-mi), who lives with thick swear words, but has a soft heart, are like a familiar grandmother in a corner shop. 'The believer' (Kim Hye-ok), who has a girly sensibility, reminds me of a cute but lovely friend, and 'Jun-seok' (Lim Chang-jung), a former robber who is shy and is even beaten by grandmothers, feels like a comfortable older brother that can be found anywhere in town. In addition, the actors, who have strong acting skills, perfectly digest the characters that fit them, adding more reality.

The story behind the formation of the 'oldest bank robbery'!
The actors that we had in mind from the production stage, the actors cast each other!
The film <The Six Bloody Robbers>, which achieved a fantastic combination of Na Moon-hee, Kim Su-mi, and Kim Hye-ok, was different from the casting process. From the beginning, the production team said that they had Na Moon-hee in mind for the role of 'Jeong-ja', a charismatic leader who has the crucial secret that they must go on a trip to Hawaii, and Kim Su-mi for the role of 'Young-hee', a radical but deep-seated. And the role of a 'believer' with a girl-like sensibility is no different than a character that fits closely with Kim Hye-ok, even when she gets older. Whether the production team and the actors had a good heart, when they made an offer to each actor, they all agreed without hesitation. It turned out that the actors who had known each other from an early age suggested to each other, 'Let's do it together' after reading the script. Dream Casting, which was created when the minds of the production team and the hearts of the actors became one, became the greatest strength of <The Six Bloody Robbers>. And the audience will be able to meet the three actresses in one movie, who are constantly navigating through movies and dramas.

The mood maker of the scene bursting with laughter!
No one can stop Kim Su-mi's ad-lib~
Kim Soo-mi, who has been loved by all generations for her comical acting in <Crisis of the Family> and <An Unstoppable Marriage>, shows the essence of comic acting in <The Six Bloody Robbers>. Kim Soo-mi, who took on the role of 'Young-hee', a negotiator of the robbery with thick profanity and rapid-fire speech, played the role of a mood maker throughout the filming. In particular, when filming the scene of negotiating with the police on the phone in the bank, it is said that when he tried to use abusive language with intense emotional acting, the pronunciation was twisted and gave a big laugh. Also, in the scene of an argument with the owner at the mart, 'I'm thirty-nine!' Even the production crew burst into laughter at Kim Soo-mi's ad-lib shouting, and the filming site became a sea of laughter. <The Six Bloody Robbers> was born as a comedy movie with a more powerful laugh bomb thanks to Kim Soo-mi's well-rounded comic acting.

Tied up with ropes, guns stolen, beaten, buried…
There is no end to Lim Chang-jung's suffering and humiliation.
Lim Chang-jung, who played the role of 'Jun-seok', a training assistant who made a great contribution from the 'Blood Blood Robbers' to becoming a bank robber, was in a difficult time during the filming period. Jun-seok, who hides without a penny after robbing a bank, is discovered by the grandmothers, tied in ropes, tortured, and suffers the humiliation of having his gun taken away. In addition, he is threatened, beaten, and buried by the police who come to retrieve the gun. Lim Chang-jung is a small character compared to his usual appearances, but he does his best to show good chemistry with Na Moon-hee, Kim Su-mi, and Kim Hye-ok. Also, at first, he thought of grandmothers as absurd and annoying, but he calls Na Moon-hee, Kim Su-mi, and Kim Hye-ok as 'sisters', and the process of assimilation with the grandmothers is also heartwarming fun. Lim Chang-jung, an all-round entertainer who is active in various fields beyond genres, played the role of licorice in <Yukhyeol robbers> with a small role but brilliant acting.