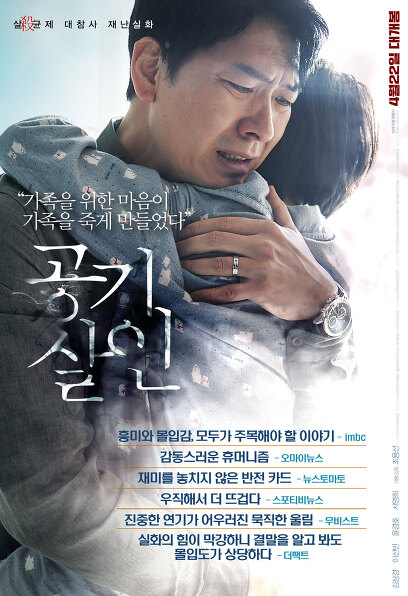 “I knew, people could die”
A disease of death that appears in spring and disappears in summer.
Their struggle to uncover the reality of the murder weapon that brought death to the Republic of Korea by air.
Evaporated criminals, victims did not evaporate!
[ About Movie ]

The movie 'Air Murder', which deals with the true story of the disinfectant disaster, depicts the struggle to uncover the truth about the victims and the murderers who have lived in pain for 17 years, along with the reality of the disease of death that appears in spring and disappears in summer.

Actor Kim Sang-kyung, who has become more prominent in real-life films such as 'Memories of Murder' and 'Top Secret', will play the role of Jeong Tae-hoon, a doctor who runs into a case after losing his family to an unknown lung disease. Lee Seon-bin, who rose to the ranks of a popular actor through the drama 'Women in the City of Drinks', plays the role of Han Young-joo, who became a lawyer after the death of her older sister, showing a sincere and strong character. Actor Yoon Kyung-ho, who has been active in various works such as the movie 'Kingmaker' and the drama 'Crime Puzzle', leads one axis of the play as Seo Woo-shik, the team leader of O2, a humidifier disinfectant manufacturer. Seo Young-hee takes on the role of Han Gil-joo, Tae-hoon's wife and Yeong-ju's older sister, adding to the sympathy of the audience with her unique realistic acting.

Director Cho Yong-sun, who directed 'Air Murder', wrote the screenplay after thorough data research and inspection by experts and related persons in various fields, so that it is not an exaggeration to say that almost everyone has searched for documents related to the humidifier disinfectant case for a long time.
It is expected to be another movie dealing with social issues, based on the novel by So Ji-won, who is the author of the films 'Wish', 'Tunnel', and 'Beastie Boys'. Writer Jae-won Jae is working in the Humidifier Disinfectant Special Investigation Committee.

A shocking true story that is still going on

The humidifier disinfectant incident, which became the background of the 'air murder', is the worst chemical disaster in the history of Korea, recorded as the world's first environmental health incident due to the abuse of chemicals among household items in which more than one million victims of lung disease occurred.
Humidifier disinfectant is the only form in which a person directly inhales the disinfectant, and it is a shocking fact that such a product became the first and only product in the world to be released and distributed in Korea, selling about 10 million bottles and establishing itself as a household necessity. Then, a number of victims who did not even know the cause appeared, and after many twists and turns, the actual situation was revealed. But what's even more shocking is that companies knew that people could die, but they tolerated it, and the state allowed it.

The movie 'Murder in the Air' tells the truth of the case finally revealed after 17 years by following the reality of why mysterious deaths with victims but no perpetrators occurred. And let the world know about the continuing pain of victims and their families who have been neglected by irresponsible companies and society.
'Air Murder' is not just a social accusation, but it delivers cinematic fun with the sensibility of a warm human drama that empathizes with the audience with dramatic elements. In this regard, we want to draw the attention of more and more audiences, so that such a catastrophe does not happen again, and we want to establish it as a story that should not be forgotten.

In 'Murder in the Air', actors who are said to be introverts join together to maximize the realism of the movie, allowing the audience to empathize more with the situation.

Actor Kim Jung-tae, who continues to be active after resumption, comes out as a member of the victim's family and vividly shows the extreme emotional line, adding to the surprise with his immersive performance.
A middle-aged actor, Jang Kwang, appears as a member of the National Assembly and perfectly portrays a realistic politician, causing outrage. Song Young-gyu of the movies 'Gangneung' and 'Extreme Job' plays the role of the best lawyer at a leading law firm, and Jang Hyuk-jin of the drama 'I'm breaking up' joins the villain line as O2's representative.
Voice actor and actor Seong Byung-sook plays the mother of a victim who was a national fencing team member, Lee Ji-hoon in the drama 'A Wise Doctor' plays the role of Jeong Tae-hoon's junior doctor, Lee Yoo-jun in the movies 'Wind', 'Sexual Murder', and the drama 'Signal' plays the role of chicken farmer. Stand on the helper line with