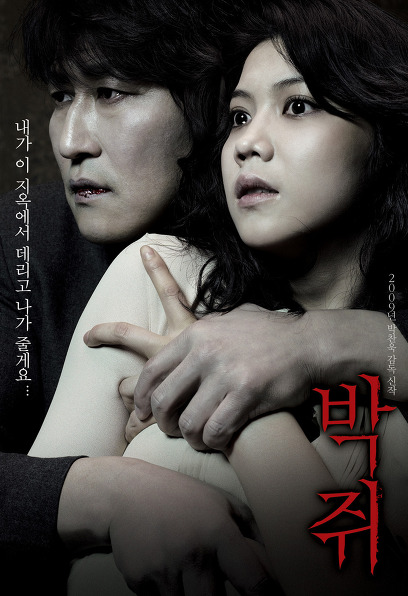 The bride becomes a vampire!
A priest named Sang-hyeon, who works at a hospital, suffers from his helplessness to have to watch dying patients, and voluntarily participates in a vaccine development experiment that is being conducted secretly abroad. However, during the experiment, he dies due to a viral infection, and is miraculously revived by transfusion of unknown blood. But the blood turned Sang-hyeon into a vampire. The clash between his physical desire for blood and his religious unwillingness to kill suppresses Sang-hyeon, but he cannot live without eating blood.
But how do you save people's blood without killing?

covet a friend's wife
Sang-hyeon, who miraculously saved his life, meets his childhood friend 'Kang-woo' and his wife 'Tae-ju' among the believers who believe that he can do miracles and ask for prayers. Sang-hyeon, who has become a vampire, feels an irresistible desire for Tae-joo's strange charm. Tae-joo also becomes obsessed with Sang-hyeon, who awakens the desire suppressed by her hysterical mother-in-law and incompetent husband, and falls in a dangerous love.
Sang-hyeon, who falls in love with Tae-joo enough to give up everything, finally takes off the bride's clothes and enters her world. Was this the joy of human desire? Now, who is longing for all pleasure, Sang-hyeon throws off the bridle of being a bride.

A fatal temptation that leads to murder!
Sang-hyeon and Tae-joo's love grows more and more daring. When Tae-joo learns that Sang-hyeon is a vampire, she distances herself from her fear, but for a moment, she tempts her to kill her husband using Sang-hyeon's formidable power. Tae-joo tightens him even more in the name of love. Sang-hyeon, who wanted to avoid murder, eventually accepts her proposal to kill Kang-woo for Tae-joo…
The love of those who do not know the future, what will be the end?

Park Chan-wook, the end of 10 years of designing the best movie,
complete the dream project

The 2009 new film <Bat> is a dream project that Park Chan-wook, the best director of this era, has long dreamed of completing, who has captivated critics and audiences around the world with his original story and sensuous video.

Director Park Chan-wook has continuously explored the problem of human existence by illuminating the process of a person facing a moral dilemma fighting to be saved through his previous films, <Oldboy> <Vengeance is Mine> and <Mr. Kind Venus>. If so, <Bat>, which depicts the issues of ethics, salvation, and violence by taking the issues of 'the bride', 'vampire' and 'murder', can be said to be the end of the world of director Park Chan-wook's work. The irony that a priest of God, a representative sign of humanism, becomes a vampire who can sustain life only by consuming other people's blood is the ideal setting to express the problems of 'sin' and 'salvation' that director Park Chan-wook has been dealing with. am.
Also, director Park Chan-wook said that <Bat> could be a movie about 'love' and that the thing he wants to emphasize the most is love. Although there have always been male and female characters in his works, like <Bat>, a deep melodrama that is driven into an unexpected situation only because of love is the first challenge for director Park Chan-wook. Following the 'revenge trilogy', it will meet the audience with a new genre called 'Vampire Confession Melodrama'. The unstoppable variation of melodies that only director Park Chan-wook can do is another reason to be curious about <The Bat>.

To complete the dream project, director Park Chan-wook has been planning and designing <Bat> for 10 years. From the time of filming of <Joint Security Area JSA>, Kang-ho Song offered to appear, and in <Three, Monster>, he introduced the setting of a film director who makes vampires, and tested the possibility of the <Bat> project. The unique video techniques such as bold omissions and editing that have been cultivated through previous works, and camera work that pushes the camera to the limit, have been refined and integrated into <Bat>. Korea's best staff, who worked together with <Oldboy> <Kind Venus>, and <Cyborg But It's Okay>, also show off their best skills explosively through <Bat>.
<Bat> is a film that summarizes director Chan-wook Park's film world in message, style and all aspects, and audiences will be able to confirm the true nature of 'Park Chan-wook World' through <Bat>.

Korea's best actor Song Kang-ho's extraordinary challenge
Vampire, Bride and Covetous Friend's Wife
When asked who is the best actor in Korea right now, no one will object to the answer of 'Song Kang-ho'. The moment Song Kang-ho plays any character, the character exists for him and is born as a realistic person who exists right next to us.

Such Kang-ho Song took on an unconventional challenge through <Bat>. His role is to become a vampire by receiving an unidentified blood transfusion from a respected bride. In the end, he falls in love with his friend's wife and receives an offer to kill his friend, 'Sang-hyeon'. For Song Kang-ho, who gives the climax of his acting skills, expressing a character that goes back and forth in one work was “a really great adventure and hard work as an actor”. However, in the words, “I was really happy to be able to do the film <Bat>,” we can foresee that his challenge had already been successful.

<Bat> is a work that Song Kang-ho has been waiting for for 10 years. "While filming <Joint Security Area JSA>, I promised to make it with director Chan-wook Park, but I didn't know that it would take 10 years. was great." Song Kang-ho, who has been contemplating <bat> for a long time while acting in various characters such as <Vengeance is Mine>, <Memories of Murder> and <Monster>, is not an unrealistic vampire character, but rather reveals the rather human side of conflicting between beliefs and desires. A new vampire character was born. It is possible because it is Song Kang-ho to realistically feel the character of a vampire, which may be unfamiliar in Korea.

Become an actor! Discovery of Kim Ok-bin
The 2009 Expectation Week Chosen by Director Park Chan-wook and admired by Song Kang-ho
Following director Park Chan-wook, starring Song Kang-ho, and the subject of vampires, the female lead in <Bat>, which will complete all of this, was already of great interest even before production. Director Park Chan-wook's aesthetics for actresses leading to <Oldboy> Kang Hye-jeong, <Kind Venus> Lee Young-ae and <Cyborg But It's Okay> Lim Su-jeong was always right. This is because, under director Park Chan-wook's delicate tuning, the actresses succeeded in breaking the image they had before and at the same time bringing out a completely new charm.
The casting of the female lead in <Bat> is the result of Kim Ok-bin's choice not to be afraid of novelty. Kim Ok-bin has strengthened her acting skills through various characters through <Girls' High School Ghost Story 4: Voice>(2005), <Multicellular Girl>(2006), and <1724 Gibang Riot Incident>(2008). 'Tae-ju' in <Bat> will serve to amplify Kim Ok-bin's unique charm and bold acting.

An ageless appearance, a classic and modern image, an untamed but boundless energy. Director Park Chan-wook pays attention to Kim Ok-bin's potential. As if to respond to this choice, Kim Ok-bin shows a more mature and fascinating image than the character she has played in the past through the role of 'Tae-joo', who falls in love with her husband's friend and plans her husband's murder.
“She is very mature and beautiful, and she has done so much better than I expected. If you think about the image of Kim Ok-bin, the audience will be completely surprised.”
Kim Ok-bin's explosive energy on the set of <Bat> is a compliment from director Park Chan-wook for showing a presence that is not pushed back by his opponent, Song Kang-ho.
Through the completely new character 'Tae-ju', which has not been seen in Korean movies so far and has no comparison, Kim Ok-bin's fascinating appearance and provocative charm that crosses good and evil without hesitation alone makes <Bat> a highly anticipated movie.

First in Korea to attract major joint investment in Hollywood
Korean Cinema Creates a New Myth!
<The Bat> will be remembered as a monumental film that laid a bridgehead for Korean cinema to enter the global film market. For the first time in Korean film history, it succeeded in attracting investment from a major Hollywood studio, Universal Pictures International Studios, in the United States, and secured a distribution network in North America. In particular, Focus Features, which is in charge of the North American distribution of <Bat>, is a masterpiece of talented directors such as Director Ang Lee's <Color, System> and <Brokeback Mountain>, David Cronenberg's <Eastern Promise>, and Joe Wright's <Atonement>. It is a company that carefully selects only the best and introduces them to the world.

“The Bat is the first time that a major American studio has invested in a Korean film,” said Christian Grass, president of Universal Pictures International Studios. I am very happy to have done it and am looking forward to it. I also hope that there will be more opportunities for Korean film production and investment, starting with <Bat>.”
After seeing the edited version of <Bat>, James Schamus, a famous producer and CEO of Focus Features, who will oversee distribution in North America, said to director Park Chan-wook, “Even though it is an edited version, it is already very surprising and daring to see this work. It is an experience, and it is full of sincerity and an excellent image.” As a famous producer in Hollywood who has already successfully advanced director Lee Ahn into Hollywood, his appreciation is enough to make you expect director Park Chan-wook's Hollywood debut.

Considering that existing Korean films have succeeded in advancing overseas only by selling the rights to finished films or remakes, this achievement of <Bat> is a remarkable achievement.
It has proven that it can produce global content that can win the sympathy of people around the world without relying on orientalism. It is significant in that it did.

This leaves a meaningful precedent in that the Korean film industry has confidence in the possibility of producing good films and has raised the brand value of Korean films.