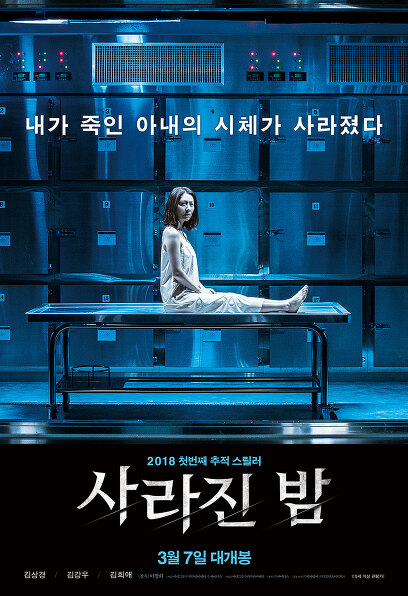 Husband (Kim Kang-woo) murdered his wife (Kim Hee-ae) and planned the perfect crime.
A few hours later, her body disappears without a trace in the burial chamber of the National Forensic Service.
And a text message from my husband.
“I will wait in the place where we buried our secret”

A detective (Kim Sang-kyung) who starts to suspect her husband and
A husband who claims that all this is his wife's plan.
Is she really dead? Did it disappear?

"Death is not always the last"

The death of a woman, her husband who killed her, and a detective looking for her body.
There are three people whose lives changed overnight.
And the case happens.
However, in this case, the 'process' is more important than the 'result'.

In other words, in <The Lost Night>, the 'process' of the event itself is the core of the story.

The moment of death when I thought it was all over.
All this series of events that started again and
Enjoying the process itself will be the goal of this film.

Netizens' enthusiastic reactions to the teaser trailer and breaking news video of <The Lost Night> reinforce this prospect. After the teaser trailer for <The Disappeared Night> was released on January 30, it immediately exceeded 12 million cumulative views on portal sites and CGV Facebook, announcing the birth of an intense tracking thriller to prospective audiences, proving the anticipation for the movie. In addition, the breaking news video of 'The Lost Night', which became a hot topic online at the same time, about 'the body was lost in the National Forensic Tree', also quickly shocked more than 300,000 netizens and amplified interest in the film. Netizens commented, "Unconditional viewing angle", "I'm going to come out with a proper thriller in a while", "It's new", "The tension that tightens the chest is the best", "There will be no shortage of thrill-following viewing courses", etc. The favorable response showed high interest in <The Lost Night>.

Immediately after taking off the veil, <The Lost Night>, which is gaining full support from prospective audiences and foretelling the birth of an intense chase thriller this spring, will captivate the audience with its tense storyline and unpredictable and shocking development.

A shocking incident that happened in a confined space for just one night
From screenplay, casting, to directing! Maximize the thriller charm with perfect harmony!
The reason <The Disappeared Night> presents a unique tension unlike any other thriller is that it deals with events that took place in a limited space for just one night. While the body of a chaebol woman disappears without a trace in the National Forensic Service corpse storage room, the breathtaking chase, the tense confrontation between characters with different goals, and the unpredictable ending are enough to give the audience a strong sense of immersion from the opening to the ending.

The intense sense of immersion, which can be said to be the biggest weapon in The Lost Night, showed its true value from the stage of the scenario. Veteran actors Kim Sang-kyung, Kim Kang-woo, and Kim Hee-ae decided to appear without hesitation because they came from the strong script power. The actors did not spare the praise, saying, "A scenario that has the power to make you read nonstop from start to finish", "I couldn't stop because I was curious about what's next", and "It was the first time such a shocking ending."

In addition, director Lee Chang-hee, who won the Best Picture award at the Mise-en-scène Short Film Festival, which produced Na Hong-jin, Yoon Jong-bin, and Heo Jeong, has established itself as a gateway for new directors, making it possible to expect the birth of a well-made thriller that can be trusted. He not only meticulously prepared the pre-production process to densely capture the tracking process taking place in a limited space, but also led the talented actors and staff at the filming site. As a result, a work that cannot let go of tension for even a moment was born.

In addition, the character leading the play is one of the viewing points. The husband who planned the perfect crime, the wife who disappeared without a trace in the morgue, and the detective who was obsessed with the case. The detailed direction that will add to the tension of the dense scenario and 'chasing thriller' and the dramatic tension of 'The Lost Night', completed by the passionate performances of veteran actors, are expected to open a new horizon in the thriller genre.

It is particularly noteworthy that Kim Sang-kyung, who had shown detective roles in <Memories of Murder>, <Montage> and <Murder Request>, transformed into a new style detective character in <The Lost Night>. Kim Sang-kyung said, "This is the first time I've been a detective like this. He is a character who leads the play with a sense of humor as well as an excellent sense of reasoning, and the running time will pass quickly if you focus on the character Woo Jung-sik.” While he has acted as a serious detective in the past, in <The Lost Night>, he appears to be weak but leads the play with cool judgment at the decisive moment, which will give the audience a new approach.
Kim Kang-woo, who has masterfully portrayed the duality of good and evil coexist, took on the role of a husband in a situation where the body of his murdered wife disappears at the moment he thought he had committed a perfect crime in <The Lost Night>. The director said, “Kim Kang-woo was Park Jin-han. He completed the character by himself.” He was nicknamed a model student because he worked with thorough preparation and amazing concentration. Kim Kang-woo said, "It was difficult to control the level of emotions. I worked hard to make the audience curious about my character and at the same time provide tension to the play.”
Kim Hee-ae, who tried her first thriller film, took on the role of a wife who disappeared without a trace after she was murdered by her husband. Kim Hee-ae, who has a strong aura for the role of Seol-hee, a difficult and important character who has to show her presence even when she does not appear, has emerged as an optimal actress. “It was a film I wanted to participate in. It was filmed with an exciting heart.” She showed the most shocking performance of her life, and she will establish herself as a new heroine in the thriller genre.

The three actors, who are also university alumni, pursued each other, and due to the nature of the genre, they communicated only through acting, as the director wished, “I want you to be uncomfortable on set.” Kim Sang-kyung said, "I try not to lose to each other in roles relative to Kim Kang-woo, but I will show chemistry in the energy battle that I try not to lose even as acting." It will increase immersion.

<The Disappeared Night> borrows the skeleton of the original, a story that begins after the death of her wife, but precedes the process of adapting the characters after dismantling the stories. Above all, the core of this film is that it is a 'story of finding the whereabouts of a corpse'. Mysterious things that happened overnight started from 'Seol-hee', making the audience think, 'Is Seol-hee really dead? Did he live?', making the ending unpredictable. The two works also show differences in the character relationship diagram. <The Disappeared Night> focused on reconstructing the characters in the original work in a Korean style and adding internal conflicts to make them more immersed in each character. Even the villains feel compassion, and they are immersed in the 'process' itself until they make the extreme choice. In particular, it added dramatic fun by symmetrically showing the tense confrontation and internal conflict in a limited space with the two axes of 'Jin-han' who killed his wife and 'Chung-shik', a detective who suspects him.

In addition, <The Disappeared Night> borrows various strengths of the thriller genre preferred by Korean audiences. Unlike the story development from a static and objective point of view of the original, it provides a high level of immersion through the rapid development unique to Korean films. In addition, it is said that he paid special attention to music and art in order to maximize the wide emotional line created by the main characters in the play.

Another protagonist, 'Nukgusu mortuary storage room'
It provides overwhelming tension with perfect details and sophisticated directing!
<The Disappeared Night> is based on 'Gukgusu', which has been heard through a lot of news but has never been revealed to the general public. It is a shocking crime scene where the corpse of Seol-hee, the president of a large corporation, disappeared without a trace before the autopsy, and the place where the main characters 'Chung-shik' and 'Jin-han' collide and the case unfolds.

It was the production team's greatest mission to not only realistically express the national fruit tree, but also not to feel bored as it is a story that takes place in a limited space. It took a lot of time, money, and effort for the art team to realize the space envisioned through several actual visits to the National Forensic Service. The production team said, “The reality of the space was important, but it was most important to create a tone and manner suitable for a thriller.” In addition, he boldly tones down and distorts the color of the set to create a strange atmosphere. Through this, it was intended to maximize the sense of fear and tension through spaces with different atmospheres, such as the interrogation room and the corpse storage room.

The actors could not help but be amazed at the soup set, which was created through the special efforts of the production team. Kim Sang-kyung said, "You won't get the feeling that most of the scenes were filmed in a limited space called the National Fruit Tree. You will feel it as an attractive space with strong power in its own right.” Kim Kang-woo said, “It was a space so realistic that it was a shame to destroy it after filming was over. Thanks to this, I was able to capture my emotions perfectly.” Kim Hee-ae also said, “It really felt like we were filming at the National Forensic Service. You moved it just as you imagined it. The experience of lying in the morgue was really special,” he recalled.

Gukgusu, another protagonist of <The Lost Night>, completed as a space that maximizes not only reality but also genre fun through such elaborate preparation, will give viewers a sense of complete immersion as if they are in the middle of the scene where the case is unraveling.