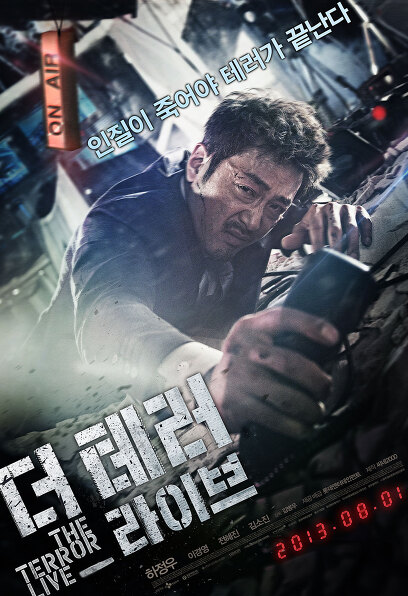 2013 SUMMER,
The vivid impact of the bombing on the Han River will be broadcast exclusively live!

"now… I will blow up the bridge over the Han River.”

National anchor 'Youn Hwa-hwa', who was pushed to a radio program due to an unfortunate incident, receives a threatening phone call from an unknown listener during a live broadcast.

“I said I was going to explode… ?” The moment he hung up the phone, dismissing it as a prank call, he witnessed the explosion of the Mapo Bridge. Yoon Young-hwa, who has a clue that the terrible disaster that happened before his eyes is a 'terror case'!

“Don’t report it. This is an opportunity of a lifetime!” As a condition of returning to the closing news, he attempted to make an under-the-hood deal with the head of the news agency, and ended up broadcasting exclusively live phone calls with the terrorist.

“What are we going to do now? It's no good to touch the press!" A terrorist who demands a huge compensation of 2.1 billion won and an apology from the president. Meanwhile, Yoon Hwa-hwa finds out that a bomb has been installed in the in-ear that is stuck in his ear…

What is the identity of the terrorist, and why did he point out the anchor 'Youn Hwa-hwa'?

A news anchor aiming for the highest ratings,
And the unidentified bomber,
Their breathtaking confrontation unfolds!

A real-time terror drama that will change the paradigm of Korean disaster films is born!
The summer of 2013 in Korea explodes with excitement!
<The Monster> (2006), which depicts the struggle of a family against a monster that appeared in the Han River, <Haeundae> (2009), a disaster caused by the super-massive tsunami that hit Haeundae <Yeonga City>, an infection disaster caused by the 100% killer parasite 'Yeongasi' >(2012), the common keyword of the blockbuster films occupying the theater district in the summer is 'Korean disaster film' with three beats of material, story, and acting.
<The Terror Live> presents extreme tension with a unique setting that conveys not only the realistic fear that a bombing will occur on Mapo Bridge over the Han River, a peaceful everyday space, but also a disaster situation through a live news broadcast. In addition, the confrontation structure that repeats the reversal of the unidentified terrorist who applies pressure from moment to moment in an entirely unpredictable way and the news anchor who engages in a fierce brain battle against it makes the audience unable to take their eyes off of it for even a moment. In particular, Ha Jung-woo, Korea's representative box office performer, proves once again why he has no choice but to be a 'trend' with his excellent acting skills that overwhelm the screen. The movie <The Terror Live>, which will give you a vivid and intense shock as if you are in the middle of a terrorist scene, is expected to explode in theaters this summer, announcing the birth of a real-time terror drama that will change the paradigm of Korean disaster films.

Serial killer, national ski-jumping representative, gang boss, novice romance novelist, secret agent…This time, national anchor Ha Jung-woo! Ha Jung-woo, a representative Korean actor who crosses genres from <The Chaser> <National Representative> <Crime Wars: The Golden Age of the Bad Guys> <Love Fiction> <Berlin> and digests any character 100% as her own, this time as a national anchor A dramatic transformation was presented. In particular, he plans to reveal his true worth as an actor through the development method that makes the event real-time from Ha Jung-woo's point of view throughout the running time. In <The Terror Live>, he plays the character 'Youn Young-hwa', a news anchor who was pushed from a successful closing news host to a radio program due to an unfortunate incident. During the live broadcast, an unknown listener receives a threatening phone call saying, “I will blow up the Han River Bridge.” 'Youn Young-hwa', who holds the only clue to the Mapo Bridge bombing, uses this as an opportunity to return to the closing news and exclusively broadcasts the phone call with the terrorist, but as the incident gradually turns into the worst disaster situation with his own life as collateral, emotions Ha Jung-woo's psychological acting that goes beyond the limits of
About <The Terror Live> before filming, Ha Jung-woo said, "I was shocked when I read the script. This is the first time since <The Chaser>," he said, expressing his infinite trust and anticipation for the work. He played the role of anchor 'Yoon Young-hwa', which he said is the most realistic and competitive character among the roles, only in Ha Jung-woo's style. Director Kim Byung-woo, who worked with Ha Jung-woo in his commercial film debut <The Terror Live>, said, "With actor Ha Jung-woo. It was fortunate that I was able to work with this actor. It was so surprising that I wondered if there was another actor like this in Korea, and he performed a performance that no one else could do." You can check it out on <The Terror Live> in the summer.

The explosion of Mapo Bridge over the Han River leading to Yeouido, the center of finance, politics and media!
A realistic horror that transforms everyday space into a target of terrorism!
What if the Han River Mapo Bridge, which connects Yeouido, the center of finance, politics, and media in Korea, and downtown Seoul suddenly explodes one day? The movie <The Terror Live> presents the dizzying horror that the peaceful everyday space Mapo Bridge over the Han River is instantly transformed into a target of terrorism. The SNC broadcasting station, where anchor 'Youn Young-hwa' is broadcast live, is also a place where you can see the 63 Building, the National Assembly, and Mapo Bridge, the symbol of Yeouido, at a glance. will do
Regarding the choice of Mapo Bridge, director Kim Byung-woo said, “There are several bridges in Seoul, but Mapo Bridge in particular is a place where the most important systems of the country such as finance, politics, and the media are concentrated, so being a target of terrorism alone can give a big shock. I thought there was,” he said. In addition, in order to deliver 'realism' and 'realism' to the audience as the top priority, it went through several explosion simulation processes. Vivid terror scenes, including the Mapo Bridge explosion scene, created with great care from the production process, are expected to devour the theater district this summer, giving a realistic horror as if they were at a disaster site.