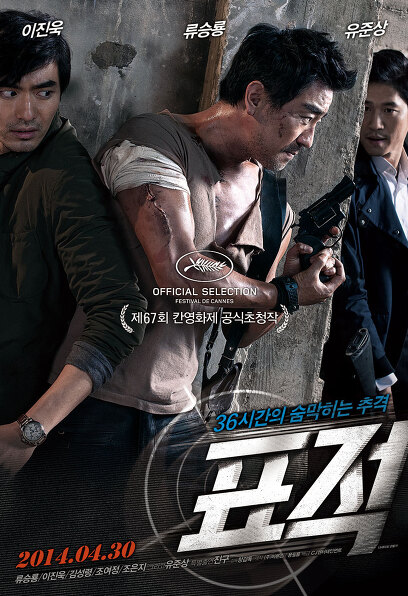 “It all started that night!”

A mysterious murder case that took place in the middle of the night.
Yeo-hoon (Ryu Seung-ryong), who was framed and chased, is rushed to the hospital after a car accident.
After that day, Yeo-hoon's doctor, Tae-jun (Lee Jin-wook), is suddenly attacked by a monster.
In order to save his kidnapped wife, he takes Yeo-hoon from the hospital and starts a dangerous companion.

Meanwhile, with detective Yeong-ju (Kim Seong-ryeong) who has a sense of the plot of the case,
Song Ban-sang (Yoo Jun-sang), who has a 100% arrest rate for criminals, newly intervenes in the case.

36 hours of breathtaking pursuit!
Both the pursuer and the pursued are a sign!

#One.
March 21st at 11pm.
A murder case occurred at Myeongjin Building in Yeongdeungpo-gu. The victim died at the scene.

#4
March 22 at 10:34am
During the transfer of Yeo-Hoon Baek to the CT scan room, a fight between Tae-Jun Lee and a detective occurred.
Running away with Lee Tae-joon and Baek Yeo-hoon. considered an accomplice

#5.
March 22nd at 11am
The Myeongjin Building Incident was transferred to the Team Leader Song Ki-cheol of the Metropolitan Investigation Unit.
A serious investigation begins.

The demonic Casanova, the King Maker, the stupid dad, this time the 'target'!
The next work of the popular Ryu Seung-ryong! Pay attention to his intense transformation!
Ryu Seung-ryong, the most glamorous actor on the screen in recent years. No one will disagree with this explanation. He is the charismatic 'Jang Seong-gi' who stole women's hearts in <All About My Wife> in May 2012, and Heo Gyun, the king maker who turned Cheonmin Ha Seon into the king of Joseon in <Gwanghae, the Man Who Became King> in September 2012. , from <Gift in Room 7> in January 2013 to 'Yonggu', a stupid father with a 6-year-old intelligence, perfectly created a character that no one else could surpass, giving the audience a great laugh and an overwhelming emotion. In addition, he swept the acting awards at major awards ceremonies such as the Grand Bell Award and the Blue Dragon Film Award with these three works, mobilizing 4.59 million, 12.32 million, and 12.81 million viewers, respectively, showing off his powerful ticket power. In 2014, Ryu Seung-ryong now stands tall in the position of 'Korean audience's favorite actor' and 'Chungmuro trend that believes and sees' beyond the formula of 'acting actor'.

In particular, after <The Gift of Room 7>, interest in Ryu Seung-ryong's next work has been focused. As a unique character, he has reached the peak of his acting transformation, and the expectations of critics and audiences have increased as to what kind of new image he will show in his next work. His choice is the most breathtaking pursuit action <Target> of 2014. <Target> is a work about a man who is caught up in a mysterious murder case, a doctor who goes on a dangerous accompaniment with him to save his wife, and two detectives chasing them for 36 hours in a breathtaking pursuit. Here, Ryu Seung-ryong will play the role of 'Yeo-hoon', who is framed for murder and chased by everyone, and will show realistic action and intense emotional acting. In the meantime, Ryoo Seung-ryong has performed various roles in many works, but since <Target> is the first work for a full-fledged action challenge, expectations for this work are increasing. In particular, he lost weight and received action training for 5 months, focusing on the character of 'Yeo-hoon', a former mercenary. In this way, the movie <Target>, which can confirm the new appearance of Ryu Seung-ryong, a popular actor in Chungmuro and his extraordinary passion, is expected to heat up the screen in the first half of the year.

Breathtaking full-scale pursuit action that takes place for 36 hours!
Get excited about the fast-paced sense of speed, the tension melted into the story, and the explosive action!
A full-scale pursuit action <Target> depicting the breathtaking pursuit of 36 hours. This work is the best entertainment movie full of elements that will satisfy the five senses of the audience, from the fast-paced setting of the setting, the tension arising from the relationship between the characters in the story, and the thrill of the explosive action.

First of all, <Target> is set to take place for 36 hours from the beginning to the end of the event, giving a sense of speed. The story of a man 'Yeo-hoon', who is chased by everyone while being a suspect in a murder case, struggles to escape from them and uncover the truth, unfolds rapidly for 36 hours, that is, a day and a half. This fast pace of development draws in the audience and at the same time allows them to share their emotions with the characters in extreme situations. In addition, <Target> presents the tension that stems from the relationship between the four characters: 'Yeo-hoon', a doctor 'Tae-jun', who is a dangerous companion, and 'Banjang Song' and 'Young-ju', two detectives who pursue them for different purposes. Although they are largely divided into the chased 'Yeo-hoon' & 'Tae-jun', and the chaser 'Song Ban-jang' & 'Young-ju', they form another conflicting element between the two characters in the same situation, raising the question of who is the enemy and who is the ally. cause. In addition, as the case unfolds, the boundary between the pursued and the pursued becomes blurred, and the tension between the characters cannot be slowed down until the end as the character relationship changes three-dimensionally. Lastly, <Target> provides thrilling action with thrilling action such as fighting, chasing, shooting, and explosions. These various actions, which account for 1/3 of the film, keep the audience's hands sweating until the end of the film. However, the action of <Target> does not emphasize only the visual and technical aspects, but rather enriches the film by capturing the character's characteristics and the emotions of the characters. The action of the suspect 'Yeo-hun' reveals desperation and anger, and the action of the detective 'Young-ju' reveals her career and charisma. Through the action of <Target> that represents each character in this way, the audience will not only enjoy visual pleasure, but will also be able to focus more on the play.

As such, <Target>, which has all three beats of a fast-paced story, a tense story, and explosive action, will satisfy the five senses of all audiences, regardless of age or gender.

Jinwook Lee, Seongryung Kim, Yeojeong Jo, Eunji Jo, Jingoo, and even Junsang Yoo!
Solid acting actors are all out! Look forward to their synergy!
The movie <Target> is attracting attention from the early stage of production for its solid casting. Popular actors Ryu Seung-ryong, Lee Jin-wook, Kim Seong-ryeong, Cho Yeo-jeong, Jo Eun-ji, Jin-goo, and Yoo Jun-sang are all active actors who are active across screens and CRTs.

Lee Jin-wook, who successfully debuted on the screen with <Suspicious Woman> and made a starring ceremony with the second work <Target>, in this work, shows off his hot blue chip side as 'Tae-jun', who is a dangerous companion to save his wife. In the meantime, he has been recognized for his romantic charm and stable acting skills, and he plans to show off a new acting style that expresses his instinctive emotions as the character 'Tae-Jun', who runs for 36 hours for his wife. Kim Seong-ryung, who has played the elegant female character of the top 1% through various dramas, takes on the role of 'Young-ju', a detective of the powerful squad who intuitions the conspiracy and uncovers the truth of the case. Considered a fashionista and a wannabe among women in Korea, she is expected to show intense action for the first time since her debut, raising the audience's expectations for her 180-degree image transformation. In addition, Jo Yeo-jeong takes on the role of 'Hee-ju', the wife of 'Tae-jun', who is kidnapped before childbirth. Jo Yeo-jeong, who plays the character of 'Hee-joo', who never forgets her warmth and strength even in extreme crisis situations, breaks away from the traditional historical drama image and presents a new look and new image. Jo Eun-ji takes on the role of 'Soo-jin', a junior detective of 'Young-ju', and explodes with hot energy. In the meantime, she has added flavor to the work as a character with a strong personality, but in this work, she shows off her colorful side by digesting her restrained emotional acting and high-intensity action. Lastly, Jin-goo took on the role of ‘Seong-hoon’, the younger brother of ‘Yeo-hoon’ who is the Achilles heel. He, who has mainly played bold male characters, will confirm his true nature through three-dimensional acting that is sometimes eerie and sometimes stimulates the protective instinct in this work. Yoo Jun-sang, who is active in movies, dramas, musicals, and albums with a passion more than anyone else, took on the role of 'Banjang Song', a perfectionist. Following the warm image of the national husband and intense charisma on the musical stage, he will transform into 'Banjang Song', the owner of the coolness that never tolerates mistakes, and will show a strong image different from before.

The best actors in Chungmuro, who have been loved by the public for their diverse personalities and solid acting skills, will work together with <Target> and fill the screen with fantastic synergy.