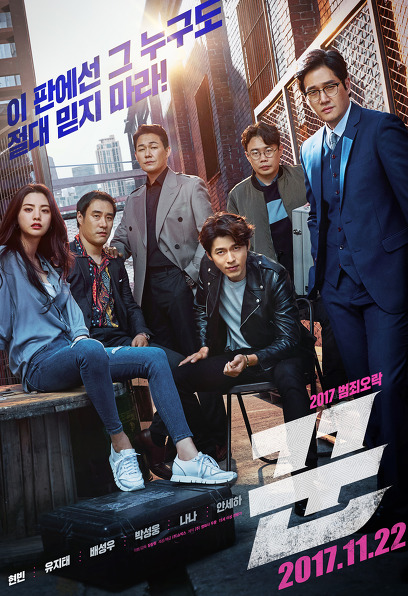 Scammers have united to catch a 'rare scammer'!
“We need to remake the board, as a team play!”

News is released that Jang Doo-chil, a 'rare con artist,' who turned the Republic of Korea upside down, has suddenly died. However, along with rumors that he is still alive, speculation begins to circulate that he was deliberately released by those in power who protected him.

Ji-seong (Hyun Bin), a fraudster who only chooses and deceives a con artist, suggests that Jang Doo-chil is still alive and proposes to catch him to the prosecutor Park Hee-soo (Yoo Ji-tae). In the unofficial investigation route of Prosecutor Park, he joins the three fraudsters Ko Seok-dong (Bae Seong-woo), Chun-ja (Nana), and Kim (Ahn Se-ha) to create a new plan to access Kwak Seung-geon (Park Seong-woong), the henchman of Jang Doo-chil. .

However, prosecutor Park secretly plots a plan for another purpose other than the arrest of Jang Du-chil, and Ji-sung and other gangsters who notice this start making their own plans so as not to be deceived by each other…

Don't trust anyone on this board!
The unpredictable team play of real 'kuns' begins!

“The one who cheated once is the bad guy,
If you are deceived twice, the deceived person is a fool.”

#Korea's first! A scammer who deceives only scammers appears!
Real 'kuns' have appeared!
<The Scammer> is a crime entertainment film about the unpredictable team play of scammers who unite to catch a 'rare scammer'. “Exploring the hidden truth is a commonly used subject in cinema. But what if scammers do this? As Tazza recognizes Tazza, it is best for scammers to catch scammers.” Director Jang Chang-won, who came to the conclusion that the scammers gathered in one place to catch other scammers, started out with the quirky imagination of the scammers from beginning to end. It was fun to draw and pursued differentiated fun.

Jang Doo-chil, a rare con artist, who turned the country upside down and died abruptly. 'Ji-seong', an intelligent con artist who only targets scammers, is convinced that his death is also a scam, and reaches out to prosecutor 'Park Hee-soo'. Here, from the veteran 'Goseok-dong' with a bit of acting, to 'Chun-ja', a seducer who charms opponents with unstoppable visuals and hand skills, and 'Chief Kim', a behind-the-scenes investigator who can collect any information, gathered in one place to become Korea's first 'scammer'. A fantastic team called 'Catch Fraudsters' is completed. Prosecutors work with fraudsters for their own desires and use them as unofficial routes to collect information, and fraudsters also use the prosecutor's official routes to achieve their goals. They are not at all afraid to deceive, deceive, and exploit each other. Flying scammers, real 'cheaters' appeared on top of the running scammers.

#First time since debut! Hyun Bin turned into a scammer!
Expect smart and sexy Hyun Bin!
Actor Hyun Bin, who was a sincere and upright image, returns as a scammer. He said that the first principle of choosing a work is 'different', and he has chosen works that can show different parts in character, material, expression, etc., even in the same genre or setting. Hyun Bin, who always longs for new changes, in that sense, <The Man> is the work that can see the most unusual transformation since his debut. Director Jang Chang-won said, "It's important to have a good casting that suits the role, but it's also important to make the audience curious and looking forward to it. In that sense, Hyun Bin was a very anticipated and well-suited casting.”

Hyun Bin's con artist, 'Ji-seong', is a person in charge of the brain planning and designing the entire version of the scammers who only choose and deceive the scammers. “I was drawn to the leadership of the swindler 'Intelligence' who leads the scammers and the character who cheats but only chooses scammers to deceive,” he said. Director Jang Chang-won said, “Hyun Bin is an actor who can express everything from a naughty side to a serious side. In particular, I miss seeing him transformed into a cute scammer.” “It’s different from the acting I’ve shown you so far. You can see a little more relaxed image.” Hyun Bin said, “You can look forward to his transformation as a clever con artist.

#Hyunbin X Yoo Ji-tae X Bae Seong-woo X Park Seong-woong X Nana X Ahn Se-ha
Such a perfect combination of attractive 'cunning'! Their unpredictable team play!
<Kun> said, “All the characters are alive and each has a twist. As Hyun Bin confidently recommends, "It is a film that can change depending on who's point of view in the continuous reversal." As he said, it is a film that stands out with a fresh combination of people with various charms and the team play they unfold.

The most important thing was the perfect casting combination in order to express the characters living and breathing well. Director Jang Chang-won struggled to strike a subtle balance between surprise and familiarity in the casting and character combination, as six players with the same goal but different goals must play unpredictably with each other. First, Hyun Bin, Yoo Ji-tae, and Park Seong-woong added freshness with a different image from the previous ones. Hyun Bin is disassembled as an intelligent con artist 'Intelligence' and catches the eye with a clever and unleashed charm that is different from before. Yoo Ji-tae exudes a cold charm as an ambitious prosecutor 'Park Hee-soo', who uses a fraudster to catch him. Park Seong-woong takes on the role of ‘Kwak Seung-geon’, the right arm of ‘Jang Doo-chil’, a rare con artist whose goal is to show off his strong presence by instilling tension. Bae Seong-woo, Nana, and Ahn Se-ha take on the roles of 'Goseok-dong', 'Chun-ja', and 'Chief Kim', the three unofficial route scammers of prosecutor 'Park Hee-soo'. . Finally, the perfect combination that director Chang-Won Chang wanted was completed.

The six players, who are matched with such tight casting and characters, radiate their charms to their heart's content and play as a team. Hyun Bin, who plays the role of 'Ji-seong', the brain of the planners, deceives even the audience with his meticulous yet smirk. Yoo Ji-tae, who plays the role of 'Park Hee-soo', a prosecutor with an endless lust for power behind the image of a just prosecutor, catches the eye with his acting that crosses good and evil. Bae Seong-woo is an actor 'Goseok-dong', and his acting that makes everyone go crazy enough to be confused whether it's a scam or real, and Nana, who boasts a synchronization rate of over 200% with 'Chun-ja', dazzles those who see him with his enchanting beauty and quick hand skills. do. Ahn Se-ha, who plays the role of 'Chief Kim', a behind-the-scenes investigator who secretly extracts information, shows off a non-secret presence with an ad-lib that goes beyond imagination. Park Seong-woong, who plays the role of 'Kwak Seung-geon', who is the target of scammers, gives laughter with his reversal charm, which seems to be thorough, but falls into clumsy temptation. The delightful, refreshing, and unpredictable team play of those who cannot take their eyes off of them will be the biggest attraction of this film.

Swordsman in the field who helps perfect morale speaks!
Behind the scenes of <The Slayer>'s costume, makeup, and location revealed!

#Cooks' outfits
Director Jang Chang-won thought that the traits of the scammers should be revealed just by looking at their costumes, as the characters themselves are quite different. 'Jiseong', who repeatedly changes like eight colors depending on the time, place, and target of fraud, created a comfortable and free-spirited feeling by matching a T-shirt with a leather jacket when mocking at the hideout. To give a sense of trust when buying starts, a handkerchief was added to a neat suit to double the sophistication and splendor. 'Park Hee-soo' expresses a cold image of a swordsman pursuing ambition in a black and gray suit. Also, the turtleneck, which is sometimes shown, shows the character of the character who tries to hide his inner feelings. Veteran 'Goseok-dong' gave a light and comical image with a combination suit and a printed shirt to express the image of a typical scammer. 'Chunja', who is dazzled by her visuals, wore a knit and skinny jeans that revealed her body so that her beauty could stand out. By grafting old vintage items here, the image associated with the name was not left out. 'Chief Kim' expressed his professional expertise by wearing a casual jumper, a hoodie, and glasses to be associated with a computer-savvy hacker. 'Kwak Seung-geon', who is the target of swindlers, tried to show his unexpected clumsy side with a knitted round T-shirt when he was seduced by 'Chun-ja'. did. “I am a swindler, but don't look like a deceiver. It was designed with a realistic concept that makes use of the charm of each character, but not excessively. As the costume director Shim Hyeon-seop said, “The character’s personality is revealed just by looking at the costume,” said costume director Shim Hyeon-seop.

#Cooks' makeup
Hyun Bin's character, 'Ji-seong', is a person who even wears special makeup for perfect morale. Director Jang Chang-won put special makeup directly on Hyun Bin's face without using a double to express both fun and natural elements. Director Jang Chang-won said that he was embarrassed by Hyun Bin, who designed it as a completely different person so that no one could recognize that it was Hyun Bin, but looked good even with special makeup. In the end, Hyun Bin was able to completely transform into a new character after putting on a lot more flesh than originally planned. He has experienced special makeup on his hands in the drama [The Snow Queen], but it is his first challenge since his debut to try special makeup with a different character, even his face.

#place of swindlers
The main place in the movie is by far the hideout of the hunters. “Usually, when we think of scammers' hideouts, we easily associate them with isolated warehouses or containers. But there is a swordsman among the tricksters. I wanted to show a differentiated hideout by using this,” said director Chang-won Jang, who set the roof of a building forest where the prosecutor looked at with his desires as a secret hideout for thieves. The rooftop above the open city building is a perfect match for all-watchers and planners. Also, the roof of the building is a place that matches the image of scammers carrying prosecutors on their backs that are close to money and power to control many things. In addition to the entrance to the rooftop, a separate iron gate was added to the hideout to reflect the personality of the thorough prosecutor 'Park Hee-soo'. It doubles the feeling of being cut off from the outside and shows the tricksters' operations more secretly.

Another main space is the camouflage office. It's a stage where the tricksters attract their prey and make them believe it like the real thing. It is a place that should look more prosperous than any other place. Director Jang Chang-won and the staff inquired about the office located in Gangnam, thinking that a real office would be more curious because it was introduced as a fake office from the beginning. This place, which is considered one of the most difficult locations among filming locations for <The Slayer>, was able to shoot safely in the actual office thanks to the staff's work for three months.