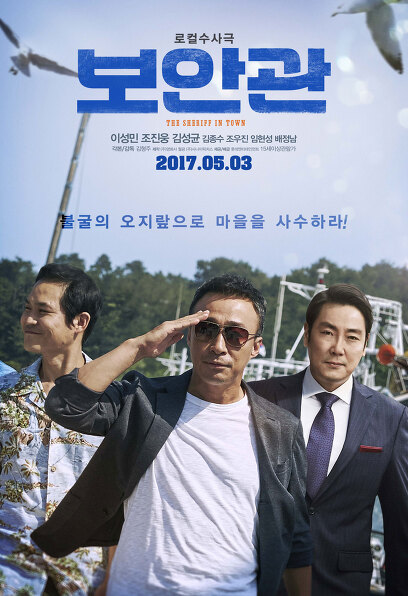 Dae-ho (Lee Seong-min), a former detective who was cut off due to over-investigation and lost his way. Self-proclaimed sheriff, he protects his hometown 'Gijang' with a remote area as wide as the sea.
When Jong-jin (Cho Jin-woong), a successful businessman to build a beach town in a peaceful neighborhood, comes down from Seoul, drugs begin to circulate in nearby Haeundae.
Dae-ho, who is suspicious of all of Jong-jin's actions, suspects him as a drug dealer and starts an investigation with his brother-in-law Deok-man (Kim Seong-gyun) as an assistant, but the public's feelings have long since moved to the rich and sophisticated Jong-jin…

Let's see, I'm just getting hurt like this. The game is an argument start!

A romantic seaside town in the south! Local emotion, not city
<The Sheriff>, a local investigation drama that awakens the hero who lives in the heart of the father.

From the title, it is <The Sheriff>, which is not found in Korea. 'The Sheriff', who is familiar as the protagonist of a western drama who protects the village alone against a villain who appears in a peaceful neighborhood, is terrified at the moment when he meets Dae-ho, a native of the detective, who dominates the neighborhood as a detective, and Jong-jin, a businessman who came down from Seoul. Instead, I got the relaxed atmosphere of a seaside town full of affection, laughter, and romance. The 'sheriff', who is not a detective or prosecutor, but an ordinary local resident, far from forensic investigation or meticulousness, but has no one to follow in his sense of justice and love. He suspects that he is the villain that cracks the peace. And, stronger than anyone else, the 'encrusted stone' causes the 'rolling stone' to make him very lonely and unfair in his hometown, which was like his own bedroom. Right after he was suspected of being a drug dealer, all his attempts to protect his hometown are misunderstood as a harsh banter. With perseverance, the investigation continues. The local investigative drama <The Sheriff> awakens the hero who is sleeping in the hearts of all fathers through the struggle of an ordinary man to protect the village with deep affection and crude sincerity, and the story of a businessman and villagers who are suspicious only in his eyes.

Form is once, class is forever! Lee Seong-min – Cho Jin-woong – Kim Seong-gyun
When they are together, the level of laughter changes! Indomitable Ojiryat <Sheriff>
Seong-Min Lee, Jin-Woong Cho, and Seong-Kyun Kim. The only thing the three actors have in common, regardless of screen, TV, or genre, is their solid personality that makes it impossible to think of other actors, and their acting ability to live three-dimensionally by adding their own color to any character. The three actors who were at the center of the monumental works [Misaeng], [Signal], and [Reply 1994] that broke the conventional wisdom of Korean dramas by expanding the scope of materials and genres of Korean dramas are the most reliant on action, reaction, and breathing. In the comedy <The Sheriff>, which is a genre, separately and together, it shows its true value without any doubt. Seongmin Lee, the 'sheriff' armed with an indomitable sense of duty to protect the neighborhood even if everyone is alone and suspicious and not ordered, when everyone is safe. Jo Jin-woong, a businessman who appears like a typhoon in a quiet neighborhood and causes disturbance, is the target of the sheriff's 'I am alone', and in every way contrasts with the sheriff, Jo Jin-woong. And Kim Seong-gyun, a brother-in-law who lives in the sheriff's house, who does not mix blood, but assists his investigation with loyalty and friendship and raises the octave of laughter. These three actors elicited the most realistic reactions from each other, both in confrontation and coexistence, and created the fun of <The Sheriff> together. Seong-min Lee, Jin-woong Cho, and Seong-gyun Kim. In <The Sheriff>, the class responds with a different laughter about what kind of synergy can occur when actors who are good at acting work together.

Kim Jong-su, Jo Woo-jin, Lim Hyeon-seong, Bae Jeong-nam, Kim Hye-eun, Kim Byeong-ok, Kim Kwang-gyu!
The native corps of <The Sheriff>, the actors who filled the captains
An ensemble character comedy that is fun to look at and reassuring no matter where you look!
Busan Gijang, the hometown and stage of <The Sheriff>, is located just a short distance from Haeundae, a world-class tourist destination, but it is a relatively quiet town with rare influx of foreigners. There is the sea, there is a white sandy beach, and above all, there are locals who have lived together for many years there, counting the number of spoons in each other's houses. More than 80% of <The Sheriff>'s laughter comes from the mosaic where these people mingle together and match each other's colors. They are rude, crude, and straight-forward, but they will play the people of the neighborhood who are so affectionate and loyal. found. As a result, Kim Jong-su, a reliable actor in <Asura>, <War Against Crime> and [Misaeng], is the eldest sashimi restaurant owner Yong-hwan in the neighborhood who is consistent with his 365-day pursuits, and Jo Woo-jin, a popular actor in <Inside Men> and [Goblin], is at the forefront of shaping public opinion in the neighborhood. Seon Cheol-ro, the acting leader, Hyeon-seong Lim of <Gundo> and <Roller Coaster> as Kang Gon, the owner of a simple water purifier house, and Chun-mo, the owner of an air conditioner shop, who breaks the hall when Bae Jeong-nam opens his mouth. Kim Byeong-ok in <Shinsegae> plays the role of a powerful gang leader who constantly tries to investigate 'drug offenders' using his personal connections as a detective while Dae-ho was a detective. Kim Hye-eun from <War Against Crime> as the station, and Dae-ho and Kim Kwang-gyu from middle school as a classmate, and Kim Gwang-gyu, who plays the role of Gyejang Park, who clings to Jong-jin, a businessman who will save the local economy. The local people in the local investigation drama <The Sheriff> have completed a character comedy that is fun to watch and reassuring no matter where you look, with the realism that embodies the local emotions.

The production team of <War on Crime> <The New World> and <The Prosecutor's Gaiden>,
<The Sheriff>, a local investigative drama presented by the film company Moongwang and Mana Pictures.
Another reason to believe in the fun of <The Sheriff> comes from the production team. Since their first relationship in <War Against Crime>, which became the driving force behind the renaissance of Korean crime films, <The New World> and <The Prosecutor's Gaiden>, which entertained 9.7 million people through an extraordinary combination play between a prosecutor and a con artist. Film companies Moongwang and Mana Pictures always bring out a 180-degree transformation so that the actor's existing image cannot be recalled, and new and powerful characters that cannot be found in other films and national buzzwords such as “Alive” and “Drew” are heard in the ears. He left a clear impression on the audience with vivid lines that were comfortable. The local investigative drama <The Sheriff>, which they will show together, also features unique and attractive characters that change and expand the images of actors who are good at acting, led by Seong-Min Lee, Jin-Woong Cho, and Seong-Kyun Kim. promise

Sheriff Lee Seong-min, from water sports license to judo and tanning!
Sheriff's assistant Kim Seong-gyun acquires a large bus license with a passing rate of 100%!
A passionate passion for the character, Busan Gijangpan Infinite Challenge!
The self-proclaimed sheriff 'Daeho' and the sheriff's assistant 'Deokman' form the core axis of <The Sheriff>. There was the hidden effort and passion of Lee Seong-min and Kim Seong-gyun until the somewhat lax but emotional, fantastic combination was born. Seong-min Lee, a former judo athlete and detective, has consistently learned the basic postures and movements of judo, and attended Paju Action School for a long period of time and trained in order to show the natural life actions he has become accustomed to. In addition, a new challenge was attempted in order to equip two important things suitable for the sheriff 'Daeho' who sailed off the coast of Gijang, Busan. First, in addition to physical training for a healthy body, he performed a tanning under the hot sun off the coast of Busan with Bae Jeong-nam, who plays the role of 'Chun-mo', and made a delicate effort to change even the skin color. Second, he obtained a water leisure sports license for a character who enjoys motor boats and jet skis as hobbies. Lee Seong-min passed the first round in both writing and practical skills to obtain qualifications to drive a boat and showed off his extraordinary skills, and from head to toe, transformed into a 'Daeho', perfectly expressing the dynamics of the character. On the other hand, Kim Seong-gyun showed enthusiasm for obtaining a large bus license for the short scene in which 'Deok-man' drives a large bus. After taking 10 hours of license training, 7 hours of practical training, and 3 hours of department training, he obtained a large bus license out of 100 points. There were difficulties because the vehicle operated at the test site and the vehicle operated at the site were very different, but with the help of an expert with excellent driving skills, I was able to finish it safely. The two showed 'Infinite Challenge' with extraordinary affection for <The Sheriff> and passionate passion for the character, which will be conveyed to the audience through the screen.

From Busan to Tongyeong and Geoje!
Capture the space you imagined from the scenario stage!
A 90-day itinerary complete with 100% all-location
The movie <The Sheriff> is set in the background of a captain who lives in the romance of the blue sea. Director Kim Hyung-joo, who is home to Busan, naturally thought of Busan Gijang, a familiar space from the screenplay process, as the background of the story, and made the location principle that the symbolic spaces in the movie will be filmed in the actual factory. The production team went hunting around the actual area of Busan that appeared in the scenario, and as a result, Daeho and the members' hideout, Captain Hak-ri with a container, and Dae-ho, Dae-ho walking armed with a backcountry, and Annam-dong, Seo-gu, were used in real scenarios. The places that were marked were able to be captured in the film as they were. Filming in Busan, which lasted for about two months, continued with the beautiful maritime cities of Tongyeong and Geoje. A place that makes you excited just by hearing the name. However, the filming did not go smoothly. As filming began in Geoje and Tongyeong, a huge typhoon continued to pour in, delaying the scheduled filming schedule, and sometimes ending filming in the middle. Despite these difficulties, the staff did not stop the location for 90 days, and added natural art to the deep blue sea as a background to create the unique stickiness and warmth of a fishing village, and <The Sheriff> where you can feel the fishy sea breeze from the midsummer sea. >You have completed a friendly village of your own.