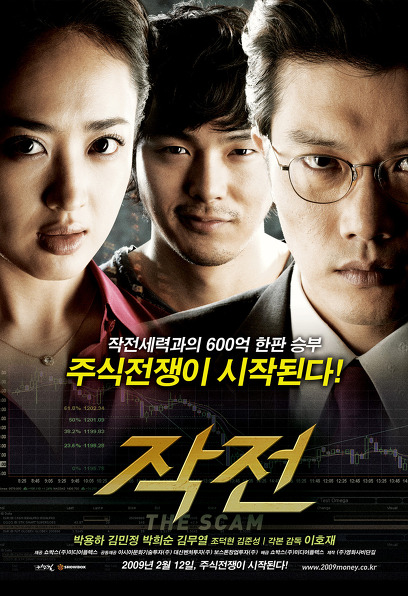 A boring life, Kang Hyun-soo who read stocks to change in one shot
Joined by former gangster Hwang Jong-goo and a group of people, challenge the 60 billion stock operation!
Kang Hyeon-soo (Park Yong-ha), who can't sleep when something unfair happens, challenges the stock to change his life in one shot, but he quickly becomes a bad credit person. He harbors poison, and after years of self-education, he has now become a skilled professional ant, and finally pursues one of the operatives, earning tens of thousands of won at once.

However, the joy was short-lived, and what he touched was the operation owner Hwang Jong-goo (Park Hee-soon), a former gangster, was working on. Hyeon-soo, who was kidnapped after being abused, was recognized for his extraordinary ability that ruined Hwang Jong-goo's operation, and he was involved in a 60 billion heavyweight operation that would shake the Republic of Korea.

Unlike novice Hyun-soo, the operation members who participated in this operation are big-time professionals who turn the Korean economy!
Hwang Jong-goo, who ended his long gang life and entered the world of stock operations by establishing DGS Holdings,
Yoo Seo-yeon (Kim Min-jung), who thoroughly manages the secrets as well as the assets of the upper class such as a wealthy man who wants to evade taxes and a politician who has accumulated slush funds;
Min-hyeong Jo (Mu-Yeol Kim), a special ace in the operation field, who is on the road to promotion with high performance at Seojin Asset,
And the best members were composed up to Park Chang-joo, the major shareholder of Daesan Engineering & Construction, the starting point of the operation.

Daesan Engineering & Construction, an insolvent construction company, is the only platform for them to open up. Using 'environmental technology', which is the best killing item in the operation, invested in 'Hangyeol Venture' that is conducting 'research on bacteria to improve water quality' Using perfect money as a bait, he buys Daesan Engineering & Construction stock. In addition, as the media star Kim Seung-beom, famous for his analysis, and the dark-haired foreigner Brian Choi attract foreign capital, the board grows out of control and begins to sweep away the money of the blind ants.

When the jackpot is in front of your eyes, the operation proceeds so perfectly!
Another under-the-ground operation begins in which the operation members chase after each other…
The largest operation on earth in which Korean money moves begins.

'Stock Operation', the first material attempted in Korea
Now, the world is a stock war.

Korea is also suffering from the global economic crisis. With stock prices rising and falling, which decorate the news headlines every day, the whole country is paying attention to graphs and indices that are not even in their hands. Today's battlefield stock market is scarier than a battlefield where tanks and missiles come and go! The world is currently in a stock war. The movie <Operation> captures this situation very realistically and urgency. The movie <Operation> is the first movie to deal with stock material in earnest in Korea.

60 billion won in life change that is more urgent and thrilling than a military operation <Operation>
The movie <Operation>, in which an ordinary man who jumped into stocks to change his boring life in one shot, is tied to the operating forces and waged a battle against everything, is the story of the hidden desires of people living today and the human effort to achieve that desire. Draw the figure fiercely. In 2009, everyone, whether they know stocks or not, whether they are interested in the economy or not, will be thrilled to see the movie <Operation>, which is more tense and thrilling than a military operation. And you will discover the joy of another life hidden in your own life.

The actors who are drawing an upward curve have gathered!
The perfect cast of real actors!
Park Yong-ha, Kim Min-jung, Park Hee-soon, Kim Mu-yeol, and various acting colors harmonize the perfect enemy role
Now, star casting no longer meets the expectations of the audience. Looking at the box office hits of 2008, such as <The Chaser>, <The Best Moment of Our Life> and <Beautiful Island>, most of the movies that perfectly matched the character with the casting of the enemy who escaped the dependence of the star received a high response from the audience.

The movie <Operation> is a work that shines in the perfect casting of actors who are running at the high end. Park Yong-ha, who received attention for his ordinary but charismatic acting, will play the role of 'Kang Hyeon-soo', who is aiming for one shot in life, and will show the image of a small citizen dreaming of a refreshing change. Kim Min-jung, who has shown various character performances, is the most suitable Korean actress for the role of 'Yoo Seo-yeon', who is confident with her own abilities in a society dominated by men. In addition, actor Park Hee-soon, who won successive awards at various film festivals in 2008, intensely captured the twisted desires of 'Hwang Jong-gu,' a former gangster-turned-operational commander. Actor Kim Moo-yeol, recognized as a blue chip in the musical world, plays the role of 'Min-hyeong Jo', an elite ace and designer in the operational world, and realistically fulfills the desires of the younger generation.

The movie <Operation> will show the perfect combination created by the cast of actors Park Yong-ha, Kim Min-jung, Park Hee-soon, and Kim Mu-yeol, each with their own personalities, based on their solid acting skills.

Well-made movie with realism
Solid scenarios, living characters, and a screen full of urgency
<Operation>, which caused a sensation even before filming with a highly complete scenario. Director Lee Ho-jae personally met not only stockbrokers, but also the upper class, politicians, and businessmen for two years, listened to the stories of people who had money and those who actually did the operation, and completed a realistic scenario by closely observing his tone and attitude.
In the movie <Operation>, almost every scene was filmed with two or more cameras to show the story development full of urgency and the tension between the characters. The rich facial expressions of the actors are captured without missing a single moment, and people who are deceived and deceived, and situations that change with the rapidly moving stock price fluctuations, are thrilling thrills with films over 300,000 ft and an overwhelming number of cuts twice the average number of Korean films. A new style of video that maximizes tension by giving
In addition, he focused on spatial art to express various figures in the stock market, a microcosm of Korean society and economy. Rather than making a set or composing an alternative space, we filmed in a real place to maximize reality. The realism is vividly captured through space and props that are as realistic as possible, such as investment offices and broadcasting stations, as well as stock-related places such as the trading center and the auditorium where information on the stock market can be seen at a glance.