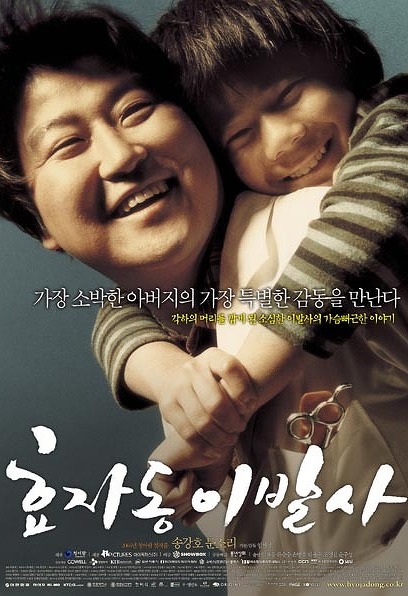 My father was an ordinary barber, but… It wasn't just a normal job.

Because he was a barber in the neighborhood where the president lives.

"If it's round and round, the constitution will be changed too, but after five months in the womb, you have to have a baby!"

When the Blue House was called 'Gyeongmudae', there was a filial piety barber shop in the neighborhood where Gyeongmudae was located. Hyoja Barbershop is owned by a timid but simple barber called Seong Hanmo or Tofu Hanmo, who was a careless barber who seduced (?) Kim Min-ja, a virgin who worked as a shaving and assistant, to make her pregnant. With the pride of a local resident of Gyeongmudae, he believed that whatever the country was doing was always right, and on March 15, 1960, on Election Day on March 15, 1960, when people criticized the election as fraudulent, eating ballot papers for the country or burying ballot boxes in the wild. did not refuse What persuaded Min-ja that she was pregnant but not married was the logic that she had to give birth unconditionally, because five months of pregnancy should be regarded as a single person due to the country's policy of 'round-and-tear'.

“If only Erla came out, you were dead~~~ Did you die, the culprit of election fraud??”

And about five months later, on April 19, 1960, he had a son, Naan-an. On April 19, 1960, Han-mo's wife Min-ja's labor intensified, and Seong Han-mo loaded his wife in a truck and left for the hospital… Somehow, a large-scale rally to abolish the 3.15 election fraud is in full swing on the streets. Students who were wounded by the gunfire mistook Hanmo wearing a white barber robe for a doctor, and Hanmo, who happened to be a hero, drives the patriotic youths to the hospital in a rear car carrying Minja in labor. The day on which Nagan-i, the son of Han-mo Seong, was born, later became widely known as the 'April 19 Revolution'. And the following year, on May 16, 1961, after a tank passed in front of the barber shop once, the 'middle school high school student shaved head' was issued, and the barber shop prospered day by day.


“Do you know what happens if there is a scratch on your dragon’s eye?”

As time passed, in the 1970s, his fate was decided by the 'round and round', and his son Nagan, who was born on the scene of the '4.19 Revolution' and raised with the money earned by the government following the '5.16 military coup', also became an elementary school student. However, the life of Seong Han-mo, a barber at the Hyoja Barbershop, who has been guarding for 16 years, comes to a turning point one day by Jang Hyuk-soo, the head of the security office of the Blue House. I reported that a spy was coming out, so the spy must have been an employee of the Central Intelligence Agency… The president, unaware of the circumstances, highly praises Seong Han-mo's monitoring spirit and grants him a 'Exemplary Citizen Citation'.

However, his pride was short-lived, and with this incident, he was called to the Blue House and became a barber at the Blue House to shave the President's hair. Neighbors who don't know the speed envy him and flatter him day and night, but his life begins to get more twisted when he shaves the President's hair. While the head of the security office, Jang Hyuk-soo, has his eyes wide open, he has to put scissors and a razor on the President's dragon, so he is restless, sweating profusely to injure himself. In the tense confrontation between Park Jong-man, the head of the Central Intelligence Agency, Seong Han-mo's day-to-day life is at stake.

"Hey! Y'all know who I am! I'm the Blue House barber, you bastards! These bad guys… ”

one night A spy sneaks into Bukaksan behind the Blue House. No matter how terrifying a spy may be, his physiological needs are unavoidable, and the spies crouching down to defecate due to a sudden diarrheal disease are caught by the soldiers on patrol and a gunfight ensues. Following this incident, the government defines diarrheal disease as an impure disease transmitted by spies. The so-called 'Marugus' bottle!

So, if it's just diarrhea, it's a funny situation where even the people in the neighborhood are suspicious of each other and accuse each other. Seong Han-mo, who is anxious, takes Na-an to the police station with her own hands, saying that my son is not a spy. To make matters worse, Park Jong-man, who has plotted to use Seong Han-mo to eliminate Jang Hyuk-soo and monopolize power, tortures even the young Nagan to arrest the Seong Han-mo father and son for 'Marugus' disease…


Can barber Han-mo Seong and her son Na-an survive safely?