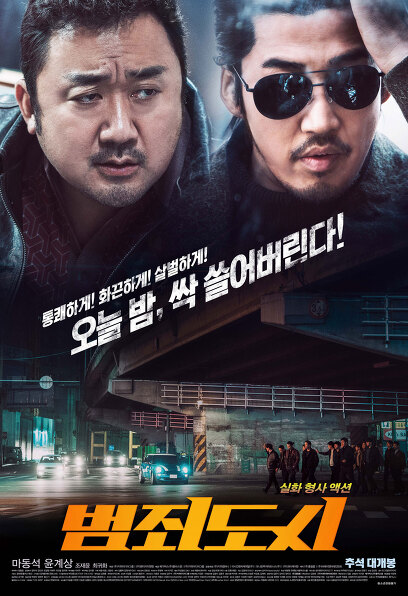 “Tonight, sweep it all away!”

Seoul in 2004…
Zhang Chen (Yoon Kye-sang), the vicious boss of a new criminal organization, who jumped from Harbin and took over the existing organizations at once, threatened even the most powerful Chun-sik boss, 'Chun-sik (Cho Jae-yoon)', and emerged as the strongest in the city.

The monster detective Ma Seok-do (Ma Dong-seok), who has maintained peace in the city with only one punch to catch the gang of 'Chan Chen (Yoon Kye-sang)' who shook the Republic of Korea, and the strong human leader Jeon Il-man (Choi Gwi-hwa), the class leader The gang led by the gang will wipe out the bad guys in one shot. I'm making a plan…

refreshing! hot! brutally!
This Chuseok, the 'gangster sweeping operation' of the gangster detectives who beat the bad guys begins!

This Chuseok, the only movie <Crime City> with the motif of a 'true story' incident
With the thorough efforts of the veteran production crew and actors, we provide real and exhilarating fun!

<Crime City> is the only movie to be released this Chuseok with the motif of a true story. The material chosen by the production team to make a new style of action movie is the 'Wang Geon' and 'Black Sapa' incidents that drew attention at the time a few years ago. The production team immediately decided to make a movie about this organization, which came from China, crossed the boundaries of a criminal organization and threatened ordinary citizens, and drove the entire city into terror at once. I was fascinated by the story of homicide detectives who threw themselves bare for the safety of citizens at a site that was more dangerous than any other crime scene.

Director Kang Yun-seong and the production team began to put on a cinematic flesh based on some articles. In particular, in addition to emphasizing the reality of the historical background and the actual facts of the incident, which is the unique charm of a movie based on a 'true story', it succeeded in portraying the fun of the process of clearing out the crime in a cinematic way. In addition, the characterization of the two main actors, Ma Dong-seok and Yoon Kye-sang, also played a big role in the completion of the film because it represents the characters of real events. Ma Dong-seok, who took on the role of monster detective ‘Ma Seok-do’, worked hard to show a powerful one-punch action with his own humor to complete an invincible character, and Yoon Kye-sang during the filming period for ‘Jang Chen,’ the villainous organization boss, for the first time. Throughout his daily life as a character in the movie, he did not let go of tension.

The true crime action <Crime City>, completed with the thorough efforts of the veteran production team, national actors Ma Dong-seok, and Yoon Kye-sang actors, will catch both the real fun of the 'real incident' and the 'movie-like' fun of the Chuseok, theaters will captivate

In this movie, Ma Dong-seok, who is loved as 'Marble' as a representative actor in Korea as well as showing a variety of characters in each work, as well as creating a box office craze, will decompose as a monster detective with a 15-year career in this movie. As he is good at action acting, he has usually played tough roles, but he perfectly drew the charm of the character 'Maseokdo', a monster detective with a rough but warm charm, making full use of his charismatic and humorous strengths. His role as a detective and his preparation for the final confrontation to wipe out the most cruel and vicious evil makes viewers nervous and demonstrates his true character as an actor who believes and watches.

Yoon Kye-sang draws attention by challenging a villain for the first time in his acting career. He, who usually had a soft image in a neat mask, surprised everyone by transforming himself perfectly from head to toe into a ruthless and ruthless emerging criminal organization boss 'Chang Chen'. In addition, for a character from Harbin, he learned Yanbian dialect and used a sword as his main weapon, so he spent a full month at an action school learning how to use a sword, not sparing his efforts and burning his passion for acting. The director said, “I remembered the intense image I showed in <Poongsan Dog>. There was an expectation that an evil that others had not seen would come out.”

<Tunnel> <Train to Busan> <Master> <Spying> <The King> etc.
A hidden card from the producers who have made creative planning, cinematic fun, and the best entertainment movies!
For <Crime City>, which is released this Chuseok this Chuseok, the producers who have produced films that are said to be domestic, from <The Brotherhood> <The Last Weapon Bow> to <I Am the Murderer> <Train to Busan> <Master> <Tunnel> <Spying> <The King> united The production team, who has satisfied the audience's desire for cinematic fun by 120% with ingenious planning and unique materials for each work, has created <Crime City> by fully demonstrating their outstanding abilities.

First, martial arts director Huh Myung-haeng, who has shown perfect action through works such as <Train to Busan> and <Master>, completed real action, one of the core funs of <Crime City>. Ma Dong-seok's cool 'one-shot action' and Yoon Kye-sang's 'evil and eerie action' will deliver a sense of vitality that has not been seen in existing action movies. Next, the makeup director Nam Ji-soo of <Chronicles of Evil> and <Goodbye Single> and art director Kim Seong-gyu, who invited the audience into the movie with colorful art in <Montage> and <Era of Innocence>, were Through various photos of that era, the focus was on thorough historical research and reproducing the neighborhoods and lifestyles where people lived at the time, focusing on real fun. In addition, music director Mog, who participated in <Secret> and <The King>, added a three-dimensional effect to the urgency of <Crime City> with rhythmic music. Lastly, cinematographer Joo Seong-rim made the most of the fun of the genre by using different shooting techniques for each scene about bringing real events to the screen. When filming detectives, cinematic devices were excluded to allow viewers to approach them on a daily basis, whereas criminal organizations were portrayed in a more splendid way.

In this way, the true crime action <Crime City>, which was literally created by the gathering of 'veteran' staff and production team in each field, will guide you to a world of real fun filled with exhilaration and excitement.

A feast of high-level real action that contains the raw material
This year's Chuseok theaters offer a different level of action pleasure!
The movie <Crime City>, which stood at the center of the topic with a real incident as a motif, tried to include realistic action for cinematic fun while aiming for realistic directing to reproduce the true story as much as possible. In particular, the fresh combination of the two main actors, Ma Dong-seok and Yoon Kye-sang, added greater synergy to the action details of the movie. In the play, Ma Dong-seok mainly performed one-punch action to subdue the opponent at once with his bare fist, and Yoon Kye-sang always carried a knife and struck the opponent's vital point in the blink of an eye, producing spectacular action scenes to balance it out. In addition, high-level action scenes that rely solely on the actors' digestive powers have been completed, from car actions that made both the actors and the production team nervous, to tangled battles and one-on-one confrontations.

Martial arts director Huh Myung-haeng said, “There were so many things that actors had to digest. We were shooting with safety props, but because everyone was holding a weapon, there was a lot of exposure to injuries.” In particular, Ma Dong-seok, who digested high-intensity action scenes in which they hit and run randomly despite a ruptured ligament, said, "I had an action plan with the martial arts director Huh Myung-haeng since the script came out. After thinking of realistic actions that detectives, not martial artists or fighters, would have actually done, I decided to try a bare-body action that combined boxing, judo, and self-defense.” Yoon Kye-sang's acting passion was also great. As it is a role that uses a sword as its main weapon, I spent about a month at the action school in order to learn how to use the sword. In addition, in order to capture a realistic yet fierce expression as it is, he performed an action scene of about 60 rounds in one take and showed signs of exhaustion, etc.

As such, <Crime City>, completed with the actors' brilliant performances and the hard work of the production crew, will be a delightful movie that will blow away the stress of the audience this Chuseok and the holidays with an extreme action that runs non-stop at every moment.