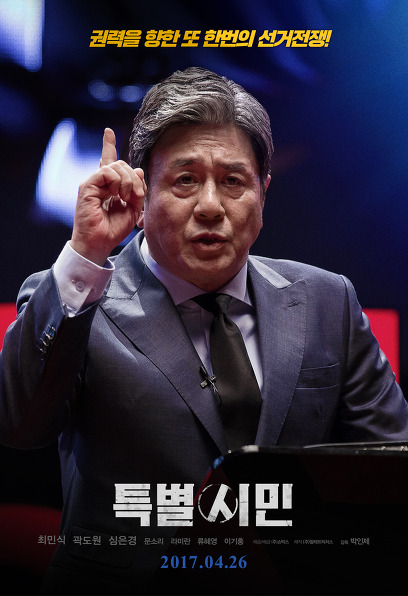 Seoul Mayor Byeon Jong-gu (Choi Min-sik), who loves only Seoul, runs on his feet. However, in reality, he is a 9-dan politician who aims for the highest power than any other politician and is thorough in image management.

However, unexpected events occur due to the fierce offensive of the opponents, and the crisis is repeated in the election battle for Byun Jong-gu's third term…

Election is war, politics is show!
To win the hearts of 10.29 million people
Another show begins!

<Special Citizen> is a film depicting a fierce election battle in which the current Seoul Mayor, Jong-gu Byun, is seeking the next presidential election and is the first to challenge for the third term Seoul mayor. <Special Citizen>, which began with director Park In-je's conception of "a politician who is a symbol of lust for power, and the flower of the politician's process for gaining power, was 'election', and that was the starting point of this film." Concentrating on 'election' itself, which is a legal means and an introductory process, it depicts the world of an election board that has never been seen before, and differs from existing political films. <Special Citizen>, which illuminates the subject of 'election', which was difficult to encounter in existing Korean films, realistically and vividly expresses the story behind the preparation process. A world where you have to win elections to gain power, and win more citizens' hearts. The story centers around a man named 'Byeon Jong-goo', who runs away to survive and be chosen.

Seoul Mayor Byeon Jong-gu, who loves Seoul but loves power more, and wants to wield that power only for the sake of the citizens. The character 'Byun Jong-goo', who is both an eloquent and more strategic than anyone else, with excellent leadership and showmanship, shows a more three-dimensional and diversified politician, breaking away from the uniformed politician character due to corruption and incompetence depicted in existing movies. A three-dimensional performance supported by Choi Min-sik's acting, who opens and closes the hearts of the audience, from a momentary performance that changes from a friendly and friendly smile to a sharp gaze that pierces the opponent in an instant, to a poker face that is difficult to understand easily Save the character's day.

Choi Min-sik, an actor representing the Korean film industry
Becoming Seoul Mayor Byun Jong-gu!
Unstoppable acting, unstoppable effort
In addition to works that wrote new history in the Korean film industry such as <Number 3>, <Shiri> and <Oldboy>, <I Saw the Devil> serial killer 'Kyung-Cheol Jang', <War on Crime: The Golden Age of Bad Guys> irregular customs officer 'Ik-Hyun Choi' , <Shinsegae> National Police Agency investigation planning division, 'Chief Kang', and General Yi Sun-sin of <Myeongryang>, which mobilized 17.61 million viewers and ranked first at the box office. Choi Min-sik, who captivated the nation by causing a syndrome with his whole body acting, took on the role of Seoul Mayor Byeon Jong-gu in <Special Citizen>. Returning to the modern drama, Choi Min-sik breathes life into the characters in the movie with thorough immersion that does not let go of tension for a moment, and heralds the birth of another unique character, Seoul Mayor Byeon Jong-gu.

For the role of Jong-gu Byeon, the current mayor of Seoul who is aiming for the next presidency and challenging the third term for the first time in constitutional history and who leads the election campaign with excellent political sense and thorough image management, Choi Min-sik paid attention to detail and accuracy in every expression and line. . Choi Min-sik said, “The density and accuracy of expression was important, and we paid great attention to detail.” From tone to tone, it shows acting that cannot be missed. In addition, Choi Min-sik challenged the stage of hip-hop and rap in this work, wrote a speech for the candidacy declaration scene, and digested improvised lines to add realism to the TV discussion scene. did not spare Director Park In-je took over the film with such an overwhelming performance that he could not think of any other actor to replace Choi Min-sik, to the extent that he expressed his total trust, saying, "I thought that there was no actor who could bring out the charisma of the character Byun Jong-goo on the screen except for the actor Choi Min-sik." His presence will become a viewing point not to be missed in <Special Citizen>.

<Special Citizen> is an impressive ensemble featuring Choi Min-sik, Chungmuro representative actors Kwak Do-won, Shim Eun-kyung, Moon So-ri, Ra Mi-ran, Ryu Hye-young, and other leading actresses in the Korean film industry, and with the addition of Korean-American actress Ki-hong Lee, the special relationship between the actors. has completed First, Kwak Do-won, who plays the role of 'Shim Hyuk-soo', the head of the election countermeasures division, who turns crisis into opportunity for thorough planning and offensive as a strong supporter of Byun Jong-goo and a leader in the election campaign, will join Choi Min-sik and Choi Min-sik following <War on Crime: The Golden Age of Bad Guys>. This is the second meeting He had to maintain a tight tension with Choi Min-sik while assisting Byun Jong-goo while weighing power with his own calculation method. Fortunately, it was our second meeting, so it was comfortable and we were able to create perfect synergy.”

Shim Eun-kyung as 'Park Kyung', an advertising expert who has just entered Byeon Jong-goo's camp, Moon So-ri as 'Jeong-i', a political reporter, and Lee Ki-hong as 'Steve', Yang Jin-ju's son. The three continue their special relationship through their long-standing affection for actor Choi Min-sik. Shim Eun-kyung, who has revealed Choi Min-sik as a mentor through several interviews, said, “I learned a lot just by acting with several seniors while filming <Special Citizen.” In particular, Min-sik Choi taught us a lot while always monitoring together.” Moon So-ri, who first dreamed of becoming an actress after seeing Choi Min-sik’s play [Equus], said, “I wanted to work with Choi Min-sik, who ignited my passion for acting.” Ki-hong Lee, who gained a lot of attention for his appearance, also said, “I decided to appear because I could film with an actor named ‘Choi Min-sik’ in one scene.” Lastly, Ra Mi-ran and Ryu Hye-young, who worked together in [Reply 1988], not only worked together again in <Special Citizen> as Seoul mayor candidate Yang Jin-ju and her election expert Lim Min-seon, but also showed freshness through a new acting transformation. tell

<Special Citizen>, which captures the perfect chemistry in the film by combining special relationships from the production crew to the actors, will provide the audience with endless fun.

<Special Citizen> Completed as a special actor!
A lively election battle created by the hard work and hard work of the actors

1. Jong-goo Byun’s declaration of candidacy with a speech written by Choi Min-sik himself
<Special Citizen> depicts the world of the election board as the subject matter, so it delivers a different attraction with special scenes that cannot be found in existing movies, such as speeches and TV debates. Here, the actors' extraordinary efforts and passionate performances add to the immersion of the audience with vivid scenes. In particular, Jong-gu Byun's speech to declare his candidacy for mayor of Seoul is an important scene that represents one of his three-dimensional appearances, so it is considered one of the scenes in which director Park In-je and Choi Min-sik, who plays the role of Byun Jong-gu, put much effort and effort into the scene. Even though it was a long breathing scene with long lines of dialogue, it was necessary to show the aspect of Jong-goo Byun, the owner of a speech that captivates the audience, so Min-sik Choi said, “In the speech, a person named Jong-goo Byeon had to be seen. He is a character and a great eloquent who makes people fall into even the seemingly obvious content. I thought that the character of Byun Jong-goo, who crosses over his own humor, savagery, and gimmicks, should be melted, rather than the stereotypical speech written by an aide.” Choi Min-sik, who internalized the character enough to write a speech to declare his candidacy after deliberation, will captivate the audience at once with his new narration and unique acting skills.

2. Seoul Mayor Candidate TV Debate Adds Vividness to Improvisations by Actors
The TV debate scene of the Seoul mayor candidates was completed with improvised lines and performances by the actors, with only the setting and direction of the scenario decided. The TV debate scene, in which Byun Jong-gu, who is defending the current Seoul Mayor, and Yang Jin-ju, a strong candidate for Seoul mayor, is on the offensive, was filmed as an ad-lib by the actors under prior consultation, creating a heated atmosphere reminiscent of an actual discussion site. Choi Min-sik's suggestion was, 'If the discussion proceeds without a pre-planned script, wouldn't the subtle changes in facial expressions and embarrassment be captured more vividly on camera? Choi Min-sik said, "Wouldn't it be more realistic if you didn't expect what kind of questions your opponent would ask? It would be embarrassing than exchanging conventional lines, but I thought that the fun of the movie would be doubled.” Ra Mi Ran also said, "It felt like each of us was fighting with our own bullets. While filming, the same lines were never spoken, so it was even more intense.” This scene, which was made possible by the extraordinary efforts of the actors, will immerse the audience in a unique attraction that can only be seen in <Special Citizen>.

Creating a special space unique to <Special Citizen>!
Until the real and unique world of elections is completed
For the unique attraction of <Special Citizen>, which deals with the fresh subject of 'The World of Election Board', the production team focused on creating a realistic and unique space. Art director Kim Si-yong, who created a space that fully utilizes the unique atmosphere and genre charm of his works through <Black Priests>, <Tazza-God's Hand>, <The Terror Live> and <Eungyo>, participated. The campground of Jong-gu Byun, the mayor's office, and the TV forum, which were created through his hands, portrayed a mise-en-scène and space differentiated from existing films. The production team, who wanted to portray the 'election board' as a cinematic and sophisticated space rather than a familiar image, used bold colors and added reality to create a more vivid and fresh sight.

The newly decorated election camp in the factory complex where Byun Jong-gu declared his candidacy was built in two floors. On the second floor, a space was prepared for key figures such as Byun Jong-gu and Shim Hyuk-soo, and the structure of the first floor overlooking the electoral college was intended to reveal the relationship of power. In the case of the mayor's office, a picture engraved with major landmarks of Seoul was placed behind the mayor's seat, and a schematic image of Mayor Byun's achievements was placed on the opposite side. It has been completed as a space that contains the 8-year history of Jong-gu Byeon, the current mayor of Seoul, and the desire of Jong-gu Byeon, as if he owns Seoul. In addition, the Seoul Mayor Candidate TV Forum added intense colors and designs to emphasize the image of the 'show', and focused on spotlights to focus attention on people including Byun Jong-gu. Here, while searching for election materials around the world, he created a unique election visual by focusing on detailed descriptions of each political party's logo design, election props and costumes, catchphrase copies, and even a single font. In addition, it captured the vividness of the election scene with a camera through locations in Seoul's famous places such as City Hall Square, Namsan Palgakjeong, Inwangsan, Noryangjin, Daehak-ro, and Garak-dong seafood market, which appear as campaign sites for candidates. The special attraction of <Special Citizen> completed through this will maximize the fun of viewing with a visual that adds realism to the cinematic perfection.