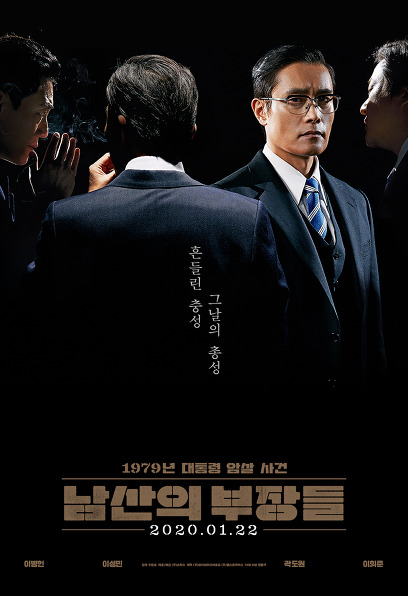 On October 26, 1979, Kim Gyu-pyeong (Lee Byung-hun), the head of the Central Intelligence Agency, assassinated the President of the Republic of Korea.

Forty days before this incident, in the United States, Park Yong-gak (Kwak Do-won), the former head of the Central Intelligence Agency,
Through the hearing, the government accuses the world of the reality of the regime and causes disturbance.
To stop him, Kim Gyu-pyeong, the head of the Central Intelligence Agency, and Kwak Sang-cheon (Lee Hee-jun), the head of the security office, step out.
Around the president, loyalists and oppositional forces begin to mix…

Shaking loyalty, the gunshots of that day

40 days before the assassination of the President of the Republic of Korea on October 26, 1979,
The story from the original non-fiction bestseller is revived on the screen

<The Managers of Namsan> is based on the non-fiction bestseller of the same name. The original was published based on a series of articles published in the Dong-A Ilbo for two years and two months since 1990, and a total of 520,000 copies were sold in both Korea and Japan, setting the record for the best-selling non-fiction category. The original author, Kim Choong-sik, is a person who has won the Korean Journalist Award twice not only for 'The Managers of Namsan' but also through various coverage. He said, “The 18 years of dictatorship in the 1960s and 1970s are an important period throughout the history of Korea. The Central Intelligence Agency was at the apex of dominating those 18 years. Until the 1990s, all media were reluctant to report on the Central Intelligence Agency, which enjoyed power enough to oversee the legislation, the judiciary, and the administration. I started writing with a sense of mission because I thought that it would be negligence for a reporter to not report on those who wielded power so great that it shook the foundations of the Republic of Korea.”

Based on the original story of 'the heads of the Korean Central Intelligence Agency (deputy prime ministers) and the political secrets they led,' the movie selected and reconstructed the main characters. Director Woo Min-ho said, “We focused on the 10.26 incident, which is considered the most dramatic incident among the original works that deal with a vast amount of content. It is an incident that all Koreans know, but I wanted to explore exactly what kind of person those people were and what was in their mind, so that gunshots were heard in the palace on October 26,” he said. <The Managers of Namsan> calmly deals with the story of the 40 days before October 26 and invites the audience into the middle of that era.

An actor who explains everything with his eyes
Lee Byung-hun
<Chiefs of Namsan> is a film about 40 days before the assassination of the President of the Republic of Korea in 1979, when the head of the Central Intelligence Agency (Lee Byung-hun), who was called the second person in power, was assassinated. The role of Kim Gyu-pyeong, the head of the Central Intelligence Agency, is played by Lee Byung-hun, an irreplaceable South Korean actor. As soon as the news of the first casting was heard, the prospective audience paid attention to the second meeting of director Woo Min-ho and Lee Byung-hun of <Inside Men>, and picked <The Managers of Namsan> as the most anticipated film.

Lee Byung-hun provides an opportunity for the audience to understand Kim Gyu-pyung's psychology with his unique interpretation and genius acting skills. Lee Seong-min, who first met Lee Byung-hun as Park Tong, said, “I was impressed that Lee Byung-hun constantly tried to express something with his eyes. I thought that Lee Byung-hun might be the best on earth for acting that explains everything with one expression and one smile. It was very impressive to see his gentle face, who did nothing, explain everything.” Lee Hee-jun, who plays Kwak Sang-cheon, head of the bodyguard department, said, "Lee Byung-hun delicately expressed the character of Kim Gyu-pyung, who shows the psychology through his eyes and facial expressions rather than big actions. Lee Byung-hun is an actor I want to be like and learn from," said Park Yong-gak, former head of the Central Intelligence Agency, Kwak Do-won, "I think Lee Byung-hun is a person with unrelenting emotions and realistic naturalness. Lee Byung-hun's Kim Gyu-pyung was near-perfect, and Lee Byung-hun was the actor I had dreamed of."

As the actors who breathed together say, <The Managers of Namsan> is a work that raises expectations just by being able to meet Lee Byung-hun's genius acting. He plans to immerse the audience in his acting, chewing up every line of lines and fingerprints. It is noteworthy that Lee Byung-hun produced an ad-lib of “A Mojito in Maldives” in <Inside Men> and mass-produced various parodies, but he did not attempt an ad-lib in <The Managers of Namsan>. As it is a work based on a real person, he thought that an ad lib, which could be considered too different from the truth or taken lightly, was a dangerous attempt. Lee Byung-hun said, “I thought it was dangerous for a film to define a story that was not historically concluded,” said Lee Byung-hun. It must be attractive.” He shared with director Woo Min-ho about the part he tried to reflect the most in the film during the pre-preparation period. As much as the important dialogues in the historical record were carefully transferred to the scenario, Lee Byung-hun, who took on the character, must have had a different mindset. Thanks to this, <The Managers of Namsan> will be a film that can meet Lee Bung-heon's authentic acting.

#Lee Seong-min_Major scene maker
#Kwak Do-Won_Scenario attached
#Lee Heejun_25kg increase
1979 Became the person at the time!
From <The Managers of Namsan> to Lee Seong-min, Kwak Do-won, and Lee Hee-jun, the actors who are said to be the best in Korea fill the screen.

Park Tong, played by Lee Seong-min, is portrayed as a person who executed a dictatorship as the first power for 18 years from 1961 to 1979. He has firmly defended the Blue House with his own tolerance for controlling the people around him, but as the years pass, he begins to feel that the supportive and opposing forces surrounding him collide. Lee Seong-min horrifiedly reproduces the blurred judgment and shaky psychology as he approaches the greed for wealth and power. The scene where Park Tong sings alone while drinking makgeolli was chosen by many staff and actors as a famous scene in the movie. Director Woo Min-ho said, “I researched the role with actor Lee Seong-min and created the character. He acted very delicately and meticulously on set. I think he portrayed the psychology that the character would have felt at the end of the regime,” he recalled of his work with Lee Seong-min.

Kwak Do-won takes on the role of Park Yong-gak, a former head of the Central Intelligence Agency, and performs method acting. Park Yong-gak is a character who takes the lead in exposing the corruption of the Park Tong regime to the world, but at the same time, he is a character struggling only to survive in a foreign country. Park Yong-gak's character was inspired by a person who spent a key period in the power of the Central Intelligence Agency in the 1960s. In order to portray this role, Kwak Do-won participated in both locations in the US and France, struggling and showing explosive performances. He excelled at expressing complex emotions, including anxiety about being chased by someone in a foreign country, longing for his homeland, and resentment and longing for the number one person. Director Woo Min-ho said of his first work with Kwak Do-won, "He is an actor with a strange talent for absorbing directions quickly and making characters explosive. I was also moved by the fact that he did not put down the script on set,” he recalled.

Actor Lee Hee-jun, who recently showed a strong presence in <1987> and <Miss Baek>, will show off his transformation with another passionate performance in <The Managers of Namsan>. Lee Hee-jun takes on the role of Kwak Sang-cheon, a loyal security officer who regards Park Tong's existence as a religious belief. Kwak Sang-cheon's character was inspired by the head of the bodyguard, who actually stood by the president at the time. Heejun Lee challenged the visual transformation by increasing 25kg for the character of the head of the bodyguard. In the scene where Gyu-Pyung Kim and Sang-Chun Kwak were grabbing the neck in the movie, the concentration was so intense that the neck was bruised. Director Woo Min-ho said about Lee Hee-jun, "With weight gain, everything changed, including vocalization and body movement. He was a completely different person,” he said, expressing his gratitude for taking on a daring challenge as an actor.

The first Korean film to be filmed at the Place Vendôme in Paris!
Large-scale locations in Korea, the United States, and France focused on reality
<The Managers of Namsan> is a film that was filmed in large locations in three countries, with 51 episodes in Korea, 4 episodes in the US, and 10 episodes in France out of a total of 65 episodes. Director Woo Min-ho chose Washington, USA and Paris, France to capture the real-life events on the screen.

First, in Korea, the Blue House, the Central Intelligence Agency, and the palace were the main filming locations. All three were produced as a set, and the Blue House gave the impression of the end of the regime, giving it a glamorous but desolate feel. The basement of the Central Intelligence Agency has been covered a lot in the existing media, so it does not deviate from the big frame, but it was produced so that the atmosphere of the basement where interrogation is mainly conducted and Kim Gyu-pyung's office can be felt. In particular, although Kim Gyu-pyung's office is small, he put great effort into even one small item so that his taste can be firmly felt. The marble on the wall of the office has cracks if you look closely, which reflects the psychological state of Kim Gyu-pyung on the wall. He was faithful to historical evidence as much as possible. The scene of the assassination of Park Tong, which was held in an atmosphere like the last fortress that no one could get close to, made the audience feel 'one scene one cut' as if they were watching a scene in a play.

The American location contains the scene where Kim Gyu-pyung and Park Yong-gak meet at the beginning of the movie. The scene of two people having a conversation with the widely spread Lincoln Memorial Park and Washington Monument in the background conveys an exotic texture. The French location was used to capture the actions of Park Yong-gak in the second half of the film. Among them, the Place Vendôme in Paris is an area where no Korean film has ever been allowed to be located. It is said that the first permission to shoot a movie was because <The Managers of Namsan> was based on a true story, and the French officials were also interested in reproducing the incident. The scenery outside France, which was filmed with a drone, is also an essential viewing point for the film. The scenery that gives off a lonely and lonely feeling as if representing the emotions of the character will leave a lasting impression on the audience.

After filming all over the world, from Korea to the United States to France, <The Managers of Namsan> is a film where you can once again taste the well-made production provided by Min-ho Woo's division.