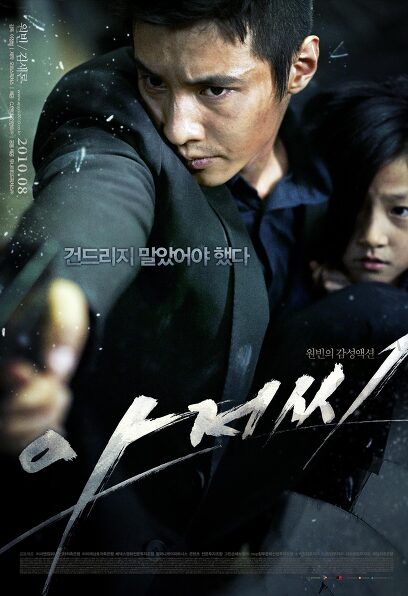 His only friend called him ‘Uncle’.
Tae-sik, a former special agent who suffers from pain and leaves the world behind, runs a pawnshop and lives a lonely life.
The only people who come to leave are the people who come to the pawnshop and the girl next door, Somi.
As they spend more time with Somi, who has been abandoned by the world, Taesik and Somi open their hearts to each other and become friends.
Then one day, Somi suddenly disappears. So-mi’s mother got involved in a criminal case and was kidnapped together.

“Even if you find Somi, you will die”
Tae-sik comes out of the world again in pursuit of So-mi’s whereabouts.
To protect So-mi, her only friend, from danger, she makes a deal with a criminal organization, but So-mi’s whereabouts are still unknown. In the process, Taesik’s secret past, which was shrouded in veil, also begins to be revealed… ..

Mister
[noun]
1. A term referring to a man who is in the same rank as his parents, except for his father’s brother.
2. Unmarried, father’s younger brother
3. A word used to refer to an adult male in a male-to-male relationship
4. A title/designation that neighbors who do not know the name of
5. The name the girl next door used to call me, my one and only friend

Wonbin becomes an uncle!
Won Bin, the pronoun of a handsome boy, was a man who aroused the maternal instinct to want to protect. ‘Jonghyun’ of <My Brother>, who was hurt because of his mother, who only favored his older brother, ‘Jin-seok’, the kind younger brother of <Winging the Taegeukgi>, who was loved by his older brother, and ‘Do-jun’ of <Mother>, who was always abusive to his mother. In the meantime, the characters Won Bin has played were the younger brother or son he wanted to take care of every time. Then he returns as a tough and strong man. He boldly cast off his soft and fragile image and was completely reborn as a powerful and charismatic former special agent ‘Tae-Sik Cha’. Won Bin, who overpowers opponents with his intense eyes and sharp and modest action and desperately pursues to recover the girl next door, who was the only friend, will shake the Republic of Korea this summer.

Wake up the girl, uncle!
Sae-ron Kim, the youngest actress to step on the red carpet after being invited to the official section of the 62nd Cannes International Film Festival with <The Traveler>. It received praise and attention from foreign media such as ‘Screen International’ and ‘Variety’, along with the evaluation that he perfectly captured the emotions of ‘Jin-hee’, who suddenly experiences a breakup with his parents, and also decorated a page of the official daily of the Cannes Film Festival. . Kim Sae-ron, who was first recognized abroad and emerged as Korea’s Dakota Fanning, became Won Bin’s girl this time. In <The Mister>, she took on the role of Somi, who was alienated from her mother and the world, but rather approached Taesik first and gave him hope for a new life. Kim Sae-ron added depth to the film with her delicate inner acting and unmatched skillfulness. It is worth paying attention to Kim Sae-ron’s move in the future.

Director Lee Jung-beom, shakes your heart!
Director Lee Jung-beom, who had been seriously digging into relationships and communication in his previous work <A Passionate Boy>, added depth to the drama by detailing the communication between the man Cha Tae-sik, who turned his back on the world, and So-mi, a girl who was abandoned by the world, in his new work <The Mister>. . Director Lee Jung-beom, who delicately expressed the psychological descriptions of the two characters in special situations in his previous work, <A Fiery Boy>, shows excellent directing skills in the intimate psychological depiction of Tae-shik and So-mi, who have no place to rest in this work, as they communicate. In addition, intense action was added to the deep drama to enrich the story. In particular, the action sequence, which increases in intensity towards the second half, is a psychological expression of Taesik’s earnest desire to find Somi. The detailed communication between the uncle who was silent in the dark and the girl next door who woke him up, along with the dramatic story and action in the process, will shake the hearts of the audience who visit the theater this summer.

Wonbin’s uncle is of a different class
There is no better casting than this!
The pronoun of a handsome boy, Won Bin, the strongest youngest actor, became an uncle?
This is the part that everyone has to tilt their head at least once. Director Lee Jung-beom, who wrote the screenplay himself, said he wrote it with the ‘real man’ in mind when he first wrote the screenplay. With a little belly and a dark beard, it was literally the setting where the man next door saved the girl next door the same age as his daughter. However, with Won Bin’s strong will and active expression of intent after seeing the scenario, director Lee Jung-beom’s thoughts changed 180 degrees. It was decided that the irony felt in the title could create a synergistic effect by casting a person who was not at all ‘uncle’. The title of an adult man called by a young girl in elementary school is just ‘uncle’. After ‘uncle = Wonbin’ was established, the character overflowed with greater vitality and vitality. With Won Bin’s efforts to transform his image, the sharp action and rough masculinity of a former special agent have been realistically revived, and Taesik’s past pain has also added depth to his acting in his excellent eyes. Tae-sik, who is no longer Won-bin, is the best casting that can’t be imagined, and the dazzling performance of ‘Uncle Won-bin’, who is not an ordinary uncle, will soon unfold on the screen.

Filming forced march all over the country for 5 months,
All the action in one black suit!
The filming schedule for a total of 82 episodes, 5 months, was tight. I went to the suburbs of Seoul, Gyeonggi-do, Gunsan and Busan, and anywhere that could be the setting for <The Uncle>. The man’s space, who lives a life cut off from the world, had to be a narrow, shabby, and smelly place rather than a busy street, so director Lee Jeong-beom searched all over the country to create the desired atmosphere and hunted. Finished. The buildings and alleys around the pawnshop were filmed near Seoul and at the entrance to small towns such as Busan and Gunsan, and the scene of the drug trafficking organization’s workshop and Turkish bath was carried out on a realistically constructed set. In the movie, various places appear, but director Lee Jeong-beom put a lot of effort into directing the space to the extent that it is impossible to tell which place is the location or the set. The costumes were also made to look as natural as possible rather than preparing multiple sets. In particular, the outfit of the man who went out to the world to save the kidnapped So-mi was solved with a single black suit. In the movie, Won Bin had to wear a suit that could be a bit uncomfortable and perform all the actions because it was set to find Somi right after going to his wife’s ossuary. The feeling of the suit tearing apart over time became a product of the uncle’s desperate pursuit of action.

Casting a supporting role that paid as much attention as the lead,
Bringing ‘reality’ to life!
The perfect subject, Won Bin, and ‘The Uncle’ seem to have a somewhat distant sense of distance. After Won Bin’s casting was confirmed, director Lee Jung-beom set a different principle for casting supporting roles. The supporting actors should add realism to the film with fresh faces that are not known to the public. For this, rather than casting as a well-known actor, we thoroughly cast based on the actor’s image, acting ability, and character fit. Won Bin’s girl, So-mi, wanted prominent child stars to audition, but director Lee Jung-beom chose the role of So-mi after seeing only the image and acting of Kim Sae-ron, who appeared in <The Traveler>. In addition, Song Young-chang (Sajang Oh), Kim Hee-won (Man-seok), Kim Tae-hoon (Chigon), Kim Seong-oh (Jong-seok), Kim Hyo-seo (Hyo-jeong), Lee Jong-pil (Noh Detective), etc. The solid actors with whom they have solidly filled the film. In addition, Thailand’s national actor, Thanayong Wongtrakul, was cast as the killer Ram Rowan, who is fighting for his life with Tae-sik, adding a different sense of acting from an exotic atmosphere.

All of the action that special agents can show,
Show the essence of realistic action!
The action of the Korean special agents was different. Taesik, a former special agent specializing in killing in the play, shows raw action with sharp and fast movements made by mixing traditional Asian martial arts such as Brunei Silat, Filipino Kali, and Arnis. In addition, it uses a variety of tools, such as hand movements, hatchets, knives, and guns, to show a different look from other action movies. In particular, the sharp action using a knife stands out in the middle of the movie, and the action using a knife is several times more dangerous than an action using a hand and foot action. Also, the action using a knife in <The Mister> often had to be filmed in close contact with the actors, so the risk of injury during filming was also high. Because of this, a lot of time was invested in practice, and both the actors and staff had to pay special attention to finish filming safely. In particular, actor Won Bin, who is challenging his first action acting, started body-building and action training a few months before filming, and silently received intense martial arts training while learning how to use a knife and gun that a former special agent had to show. In addition, there is a rumor that the martial arts team performer, who was scheduled to serve as Won Bin’s replacement for action scenes with a risk of injury, was always on-site, but he was praised by the martial arts team for digesting most of the acting himself. In the second half, the action scenes in which Taesik used a gun to clear the organization were filmed realistically by renting a real gun. This scene in which Taeshik’s anger explodes is the highlight of the action in <The Mister>. The gunshots that stimulate the ears, the casing of more than a hundred bullets a day, and the weight of the heavy gun, the actors and staff had to shoot all week. It is a famous scene that shows their suffering. 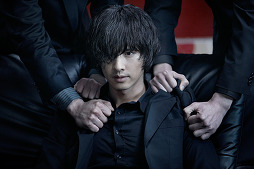 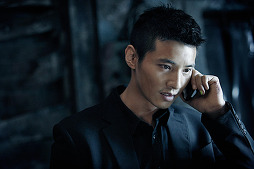 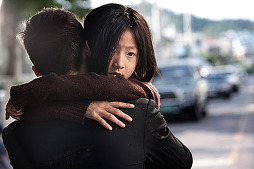 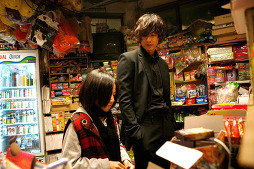 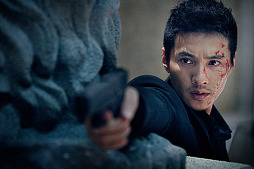 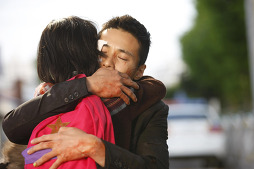 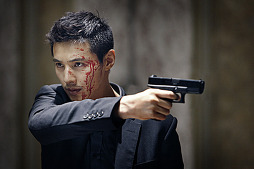 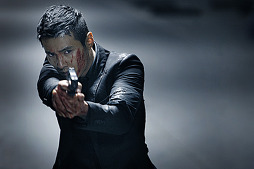 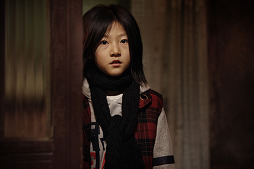