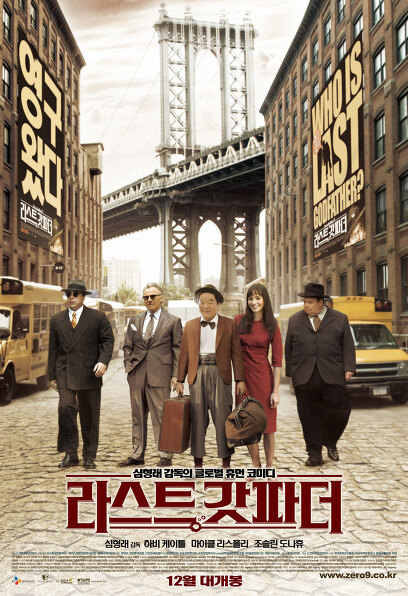 The hidden son of the mafia godfather… 'Permanent'?!
Young-guk (Shim Hyung-rae), who has a less handsome appearance, less detached behavior, and is unique to anyone, came to New York in search of his father, Don Carini (Harvey Keitel), the godfather of the mafia. To make matters worse, the second-in-command Tony V (Mike Rispoli), who has abandoned the dream of a successor he had believed in because of Yeong-guk, gets frustrated as he takes on Yeong-gwon's education, which seems to have no hope as a mafia.

'Forever in the city' successor class!
Yeong-gyeong, too, is exhausted from the chaotic successor class, and accidentally, unexpectedly, and really fortunately, becomes friends while saving Nancy (Jocelyn Donahue), the only daughter of the rival organization Bonpante, who was in danger. Moreover, to please his father, he goes to collect the payment and harasses the shopkeepers, but such perpetual tyranny creates a big hit product and rises as a hero of the city.

On the other hand, Binny, the second leader of the Bonpante organization, who was displeased with this young man, kidnapped Nancy and made it a permanent act, causing a war between Don Carini and the Bonpante organization, and Yeong-gyeong's unexpected activity in a conspiracy resulted in an unexpected result. I'm predicting…
I didn't come back unless it was more funny! Look forward to it! It's come forever!

Charlie Chaplin in Hollywood, Mr Bean in England, then in Korea?!
The legendary icon 'Young-guk' that captured the Republic of Korea is back. 'Young-goo' first appeared in a parody of a popular drama as a corner of a comedy program in 1986, causing an explosive syndrome, and is still being talked about in many entertainment programs for 20 years. In particular, the first movie <Young-Gu and Tsang-Chil-i>, which appeared in 1989 as the main character, created a sensational box office sensation, exceeding the unofficial count of 2.7 million at the time, and a total of 19 series that followed, including Shim Hyeong-rae, were essential for popular comedians of the time to go through. It was a course.

Yeong-gyeong, who has won the love of the entire nation and all generations due to its explosive popularity, was upgraded through <The Last Godfather> in 2010 and increased in size as a global project to match its reputation. Yeong-gyeong, a newcomer, appears as the hidden son of a mafia godfather who has a less handsome appearance and less demeaning behavior, and sets out to attack Hollywood. Yeong-gyeong's performance that captivates the world through a grand scale that recreates New York in the 1950s and laughter in a universal language will confirm Yeong-gyeong's 'crazy presence' that stands out everywhere, beyond borders.

In particular, director Shim Hyung-rae takes on the directing and lead role in this work, and he is drawing more attention by showing his true value as the godfather of the Korean comedy industry, taking full advantage of his directing power and passion as a director, as well as the advantages of the comedy genre. He was the closest childhood best friend, and even as an adult, Yeong-gyeong's welcome comeback, which encompasses all generations, is undoubtedly the biggest gift that made fans flutter.

A global human comedy with the world
Legendary famous actor 'Harvey Keitel' returns as a godfather
<The Last Godfather> is a global project aimed at the global market, with world-class actors working together for this. In particular, Harvey Keitel, a world-famous actor who has shown charismatic performances in a number of works such as <Piano>, <Pulp Fiction> <Reservoir Dogs> and <National Treasure>, is attracting attention.
In this work, Harvey Keitel, who plays Don Carini, the boss of the giant mafia organization that dominates New York and the father of 'Young-guk', drew more attention because it was an unexpected combination. The secret to such an amazing casting is the scenario! Harvey Keitel, who received the screenplay without prior information, at first read it as though it was a serious genre movie just by looking at the title.

What is even more surprising is that Harvey Keitel unexpectedly used ad-libs while filming, and showed an unexpected greed for gags, unlike the serious charismatic atmosphere. When I came to the set, I researched the scene to be filmed that day in advance, or checked the movement from the rehearsal, and tried various reaction ad-libs to find a good response. In line with Harvey Keitel's ad-lib, the ad-lib battle unfolded between the rich and the rich, such as hitting Yeong-do as an ad-lib, creating a much stronger laugh than expected. In addition, he showed enthusiasm for the work, actively suggesting additional ideas to create more interesting situations, which became the driving force to enrich the film. Harvey Keitel, a famous Hollywood actor who displayed his hidden comic instincts at the same time as his original charismatic force, can be seen in <The Last Godfather>.

Other Hollywood actors include Michael Lispoli of <Kick Ass> and <Pearlham 123>, representative comedy actor Jason Mewes, Jocelyn Donahue of <He Didn't Fall for You>, John Finnette of <Dormitory Cataclysm>, and John Folito of <American Gangster>. A large number of actors appear and show off their excellent acting skills.

Hollywood talented production crew
The crazy presence of 'Forever' that captured the filming set
The most talented producers in Hollywood came to the scene for director Shim Hyung-rae's <The Last Godfather>. As is already known, the production crew who decided to work after reading the screenplay, fascinated by the fresh slapstick comedy that was not often encountered, is very colorful.
'Dumb and Dumber', 'There's Something About Mary', 'American Pie 2' 'Mark Irwin' filmed, and 'Cecilia Montiel' and 'Cecilia Montiel' who worked together in the series <Twilight to Dawn>, <Desperado> and <Zoro> Graciella Mazon' participated in art and costumes, respectively. In addition, the editing was done by 'Jeff Freeman' for 'Temptation More Beautiful Than Love', 'Just Friend', and the music was by 'John Lisauer', who participated in the music production for 'Watchmen' and 'Seven'. Here, with the participation of the best Hollywood staff, such as the screenwriter Combi, who was nominated for the Academy Award, participating in the screenplay, expectations for the perfection of the work are increasing. Hollywood's stable system and proven skills based on their splendid history gave the film a sense of depth and weight. Human comedy was born.

In fact, the Hollywood staff gradually fell in love with the main character 'Young-guk' within a few days of filming. Around the middle of filming, he kept his thumb up and followed the motion of “Tirririririri~”, and the English line “Oh~Ki~”, completed in Yeonggo’s unique tone, would have become the most buzz word among the staff. it was about Later, when the staff saw the finished film with the aura of a pleasant filming site, they praised it as “FEEL GOOD MOVIE”.

Meeting of 'Young-guk' and 'Wonder Girls' who entered Hollywood
'Nobody' sang 'Nobody' that took over Billboard beyond Asia
Korea's representative comic character 'Young-gu' and Korea's representative idol group 'Wonder Girls' met. The news that Wonder Girls will make a cameo appearance in director Shim Hyung-rae's next film, <The Last Godfather>, has already drawn attention with the highest expectations. In this work, Wonder Girls makes a surprise appearance as a singer at a jazz club who took Yeong-guk, who was in despair, to comfort him by the same mafia member, Macho. As can be seen from the published stills, Wonder Girls catches the eye with their familiar appearance singing 'Nobody', which climbed the Billboard charts in Korea, Asia and the US in the movie.

Wonder Girls' cameo appearance was a special request from director Shim Hyung-rae, who thought that the performance stage of 'Nobody', which was attractive in retro style, would go well with the 1950s, the background of the movie, as an example of proper collaboration with a celebrity junior who is trying to advance into the United States. . In order to have all the five members who visited the filming location in LA for a performance, the scenario was revised and the Wonder Girls' names in the scene were exposed.

A perfect reproduction of New York in the 1950s
Advances in technology using computer graphics and miniatures
<The Last Godfather> went through about three years of planning and preparation, but filming was completed with only 33 episodes. In the pre-production stage, we were able to reduce the number of times by two times compared to the original plan by perfectly checking every small detail such as location selection, costumes, and sets for the main shoot.
In 2010, art director Cecilia Montiel and Yeongwon Art VFX team collaborated to recreate the 1950s New York street, the setting in the movie. The computer graphics work using the thousands of photos and miniatures held during the pre-exploration phase took more than six months.

* Main Street of Carinippa
In the movie, Main Street is the main activity stage of the Carinians, where the father of 'Young-guk' is the godfather. Most of the street scenes in the movie were filmed on the LA Paramount set. To compensate for the limitations of the outdoor set, a white silk tent was put on the ceiling. The process of removing all the tents was added during the late CG work, but it was the production team's choice to give uniform lighting effects in all places.

* Gunfight between the Carinians and Bonpantepas
A tense gunfight between the rival mafia groups, the Carini faction and the Bonpante faction. Delicacy and sophistication were required in the process of background CG work so that even the smoke generated by shooting the gun could not be erased.

* 50's style building
Bringing a 1950s vibe to 2010 isn't easy. It was difficult to find the appearance of those days as modern buildings had already been erected on the street. In response, buildings in a dense line are built with CG, and miniatures are used to realistically express the ordinary streets of New York in the 1950s, stimulating a unique nostalgia.

*New York Harbor
Unlike New York, where high-rise buildings are lined up, LA, where the film was filmed, has a lot of palm trees and feels like a resort. In order to perfectly reproduce 1950s New York, the key was not only to create and erect a building, but also to erase the feeling of the Los Angeles city. The palm trees and mountains that fill the back of the harbor have been transformed into skyscrapers and stylish bridges, bringing the atmosphere of New York to the fullest.
For a panoramic view beyond the harbor, attention was paid to details, such as erecting the Brooklyn Bridge, a symbol of New York, along with skyscrapers.

Costumes with designs and colors tailored to the character
A classic style that emphasizes reality
In order to convey the character of each character using costumes, the production team created a style that suits each character's color as a concept.
First of all, Yeong-gyeong, the main character, used the brightest tone of color among the characters appearing like a strong personality who shows various activities in the play. In addition to wearing clothes in primary colors to show off their pure charm, they wore clothes with a more saturated and cute design, even if they were the same suit. On the other hand, other members of the organization expressed more calmly. Young Young's father and Carinini's godfather, Don Carini, created a stable and calm gold color, while Don Bonpante, the boss of a rival organization, created a style with a passionate wine color.
Beanie, the second person in the Bonpante organization, a member of the Bonpante faction, appears in cool blue and purple clothes to match her ambitious personality. In addition, Don Carini and Don Bonpante, the bosses of the two mafia organizations, presented a classic mafia style that made use of reality through the verification of police photographic data from the 1940s. In particular, the women in the movie were the most fashionable at the time and will provide another attraction through retro costumes that are still loved for their classic charm.