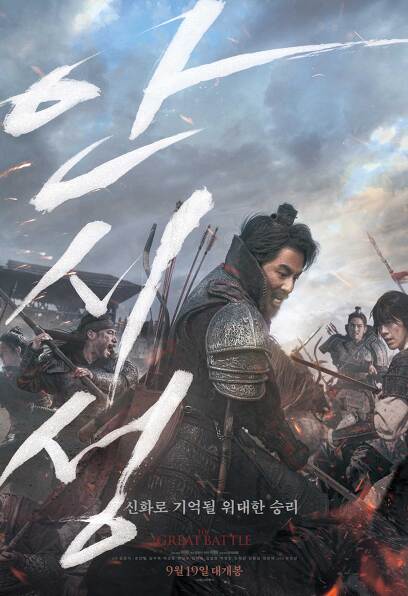 Taejong of Tang, trying to take over the world, mobilized hundreds of thousands of troops to invade Ansi Fortress, the outskirts of Goguryeo.
200,000 Tang Dynasty's strongest army vs 5,000 Ansi city soldiers.
Despite the 40-fold difference in power, Yang Man-chun, Seongju Yang of Ansi Province, and the warriors decide to fight against the Tang dynasty…

The Battle of Ansi, which led to the greatest victory in East Asian history, begins!

“Goguryeo was the nation’s largest empire, the eldest of the three Hans, and served as a breakwater to protect the Korean people. There are many factors that contributed to the prosperity of Goguryeo when it built a great empire, but I think the biggest of them was probably possible because of the outstanding heroes.”
From Ham Seok-heon 『Korean History through the Meaning』

"In order to hide the shame that Se-min Lee could not capture the lonely castle of Annesi for four or five months with hundreds of thousands of troops, the record that not only Lee Se-min failed to attack, but also the Yeongaesomum that seized the power of Goguryeo, her home country, could not do anything about it. left behind"

"From what I heard, Ansi Fortress has a tough castle and an elite military, and its lord has talent and courage, and he does not obey Makgiji's upheaval in the face of upheaval. was"
Shin Chae-ho from 『The History of Joseon Commerce』

NEW VICTORY
First action blockbuster! Heading to Goguryeo!
This Chuseok, experience the catharsis of victory that you have never experienced before!
<Ansi Fortress> is a super-large action blockbuster depicting the 88-day 'Battle of Ansi Castle', which is said to be the most dramatic and greatest victory in the history of war in East Asia. <Ansi Fortress> turned its gaze to the Goguryeo era, which was not illuminated deeply on the screen until now. There is almost no material left for Goguryeo. <Ansi Fortress> is also a film that started with only three lines of records about Ansiseong and Yang Manchun, which remain in history. Director Kim Gwang-sik realistically directs the most magnificent and splendid war scenes in Korean film history, such as the Battle of Jupilsan, the two sieges, and the highlight of the movie, the Battle of Tosan, which opens the door to the film. In order to revive the character in three dimensions, he tried from various angles to draw the forgotten history of victory, such as referring to 100 books.

Director Kim Gwang-sik said, "It was not an easy task due to the lack of historical materials related to Goguryeo, especially the 'Battle of Ansi Fortress.' I made this the point of directing,” he said.

For the first time in the history of a Korean action blockbuster, <Ansi Fortress> is going to show the spirit of Goguryeo, who was valiant by reviving a great victory in a forgotten history on the screen.

NEW ACTION BLOCKBUSTER
From Skywalker to Robot Arm!
A new world of action implemented with a state-of-the-art system!
In <Ansi Fortress>, all the actors and staff put forth their utmost efforts to bring the 'Battle of Ansi Castle,' famous for its strategy and tactics, which is one of the largest in the history of war in East Asia about 1,400 years ago, on the screen for the first time in Korean film history.

There were a whopping 6,500 auxiliary performers, and 650 horses were used in the battle scenes. 168 pieces of armor made in the Tang Dynasty and 248 pieces of armor made in Goguryeo were used. In addition to producing an 11-meter vertical fortress wall set realizing the actual height on a site of 70,000 pyeong and the 180-meter-long Ansi Fortress set, the largest in Korea, the 5,000 pyeong local set, which is the core of the 'Ansi Fortress Battle', is not CG. It was made by myself to maximize the sense of place. In order to shoot realistic action scenes, 360-degree shooting was performed with Skywalker equipment, and cutting-edge shooting equipment such as drones, robot arms, phantoms, and Russian arms was used to deliver an overwhelming scale and new visuals never seen before to the Korean audience.

NEW CASTING LINE UP
A casting lineup that shines when everyone becomes one!
'Team <Ansi Castle>' actors' explosive action performances!
The character corps in 'Team <Ansi Castle>', which is comparable to Hollywood heroes, not only clearly shows off their individuality, but also shows explosive chemistry when they are together.

Jo In-seong took on the role of Yang Man-chun, the 'Seongju of Ansi Fortress', and showed outstanding leadership that did not spare his own life by fighting the party of 200,000 with a small army of 5,000 to protect Ansi Seong-min and their livelihoods. In particular, Yang Man-chun is a very realistic casting that reflects that the generals who took control of the battlefield during the Goguryeo period are actually in their 30s and 40s. Director Kim Kwang-sik revealed the secret behind the casting, saying, "The average age of all the actors is under 40. I wanted to make a young and sexy historical drama, and that's why I cast Jo In-sung first."

After losing the Battle of Jupilsan, Nam Joo-hyeok took on the role of Samul, the head of Tae Hak-do, who entered Ansi fortress after receiving a secret order from Yeon Gaesomun. Bae Seong-woo takes on the role of Chu Su-ji, an 'ansi-seong-seong's adjutant who always reliably supports 'Sung-ju' Yang Man-chun and protects Seong-min. Uhm Tae-gu takes on the role of Captain Paso, who leads Goguryeo's strongest horse troop with quick action and aggressive breakthrough power. Kim Seol-hyun, the leader of the 'Female Soldier' Baek-ha unit, and Jeong Eun-chae, a new girl who looks forward to the future of Goguryeo.

In addition, Park Seong-woong played the role of Lee Se-min, the emperor of the Tang Dynasty, who was called the most powerful 'god of war' in Chinese history because he never lost a war. In addition to this, veteran actors with acting skills who believe in and see Seong Dong-il (preferential treatment), Jang Gwang (Sobeol-dori), and Yoo Oh-seong (Yeon Gaesomun) acted as the pillars that made <Ansiseong> solid.

The history of Goguryeo had few opportunities to be touched as much as the history of the Joseon Dynasty.
I hope this film will give you a glimpse into the energy they have.
Actor Jo In-seong (as Yang Man-chun)

It was a perfect scenario with nothing missing.
Actor Nam Joo-hyuk (as Samul)

The victory itself is important, but it is a movie where you can feel the fun of the process of winning.
Actor Bae Seong-woo (as Chu Su-ji)

The factor of Ansi-seong's victory was unity rather than resourcefulness.

It is attractive as if each character is alive and breathing.
Actor Kim Seol-hyun (Baek-ha)

I want the audience to feel that they have seen a really interesting movie.
A movie that people of all ages can enjoy
Actor Park Byung-eun (as Pung)

I hope it will be an opportunity to know a little bit about the roots of our history.
Actress Jung Eun-chae (Simi)

#Chungcha (Siege Weapon)
One of the carts used to hit or break down the wall when attacking the castle. A weapon that destroys the gates by moving it with something like a hammer with iron armor on its front part. The weapons loaded in the chungcha included large naval guns in addition to various military weapons.

#Unje (siege weapon)
Unje means a ladder that is high enough to reach the clouds. A long ladder is mounted on a car and used by the attackers to climb the fortress wall or reconnaissance. The most effective way to defend against Unje's attack is to burn the ladder using fire arrows, etc., since the material of the ladder is wood. It first appeared during the Spring and Autumn Warring States period in China.

#Siege Tower (Siege Weapon)
It is a mobile watchtower whose purpose is to put boards on the wall and send soldiers inside the castle, or to subdue enemies on the wall with an archer placed on the top floor. After filling each floor with soldiers and pushing them to the walls of the opposing camp, the uppermost floor lowers the bridge and the troops are put in. A clear advantage over ladders is that the soldiers are protected by the walls of the siege tower while climbing the walls.

# Catapult (Siege Weapon)
A generic term for siege weapons that mainly attack by throwing stones. It was used to damage beyond the walls or to destroy the walls themselves. It was used to attack while taking advantage of the weakening of the defense of the opposing camp due to the breaking of the wall. Occasionally, it was also used in psychological warfare to lower the morale of the enemy by sending a catapult at the enemy dead, the decapitated heads of prisoners, prisoners still alive, and the relatives of key figures in the castle.