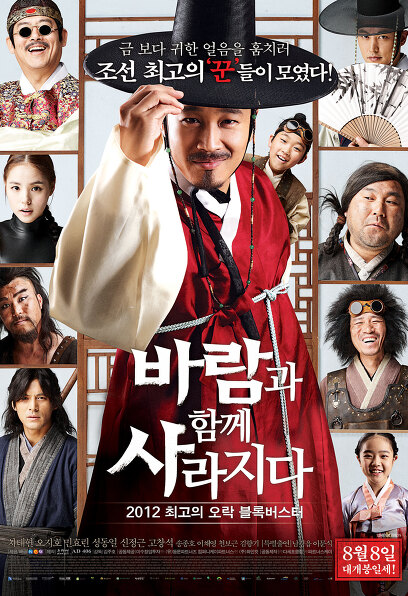 'Ice', a symbol of power more precious than gold

Deokmu (Cha Tae-hyeon) was born with intelligence, but was the illegitimate illegitimate son of Ui-jeong and was obsessed with miscellaneous books. When his father is framed by Jo Myeong-soo, who is trying to take over the monopoly on ice, he thinks of a plan to hit the back of his head. That's right, it's about wiping the whole ice out of the serving-go! Deok-moo, who once managed a serving high school, joined hands with Dong-soo (Oh Ji-ho), who was fired by Myeong-soo and his party, and sets out to find the best masters in Joseon for the operation.

When they move, the 'ice' disappears!

“We take money, gold and ice, and disappear with the wind!”

When they move, the ice disappears!

During the Joseon Dynasty, 30,000 ice cubes disappeared!
A meeting of historical drama, comedy and scale!
A cool entertainment blockbuster that will blow away the heat this summer is born!
While colorful variations of historical dramas that cross over authenticity and fusion, romance and active play are trending, <Gone with the Wind> is the story of specialists from each field who gathered to steal 30,000 'ice' from the Joseon Dynasty. shows a new differentiation.

'Ice', a symbol of power more precious than 'gold' in the Joseon Dynasty. <Gone with the Wind>, which depicts a cool operation that experts in each field gather to rob the Seobinggo against the conspiracy surrounding it, is not the royal battle for power, which has been mainly dealt with in historical dramas, but the monopoly of ice. It doubles the interest with fresh ideas as the center. <Gone with the Wind>, in which a huge operation to rob the entire 30,000 pieces of ice in the serving box, is performed, adds a spectacle and a sense of scale to the witty setting, solidifying the aspect of an entertainment blockbuster. In addition, from the resourceful strategist Deok-moo (Cha Tae-hyun), who holds the command at the center of all these plans, to practical help forces such as the best samurai and reliable money chains, as well as leading figures in each field, such as tunnel digging, bomb manufacturing, disguise, and diving. Till. Even if you look at each one separately, the witty characters you've never seen before give you unbearable laughter with their patented technology and unpredictable performances. The massive ice that is cool just by looking at it, the action full of urgency that unfolds over it, and the witty operation of ideas that shine whenever a crisis is encountered. will tell

<Gone with the Wind> opens the horizon of a new comic historical drama that has never been seen before with a combination of characters full of personality and a fresh and unique material of ice wars unfolded by the best 'slayers' in Joseon, laughter, action, and scale It will prove to be an entertainment blockbuster that can be enjoyed by people of all ages.

Korean version of <Avengers>! The best 'kuns' in Joseon have united!
A full set of charming characters that no one can miss!
Starting with 'Deokmu', a leader who summons Joseon's best 'slayers' and a genius strategist who plans to destroy the entire serving go, <Gone with the Wind> features leading figures in different specialized fields that were not previously seen in historical dramas. Each talented character, who can be called 'Avengers', delivers a variety of fun by itself.

The 'Deokmu' character, played by Cha Tae-hyun, sets up an ice war operation with an extraordinary brain and brilliant ideas, convenes experts in each field, and leads the center of the film. And the specialists who join the operation to break the ice of the serving go add momentum to the play with their unique and witty skills, while at the same time play a decisive role in comical fun with irresistible fun, charm and personality. 'Dong-su (Oh Ji-ho), a samurai with an upright personality but joins the service bar, and 'Soo-gyun (Seong Dong-il)', who serves as a water drinker in the back line, play a different role in the operation of 'Deok-mu (Cha Tae-hyun)' with his left arm and People with the right arm. Here, as a specialist for a full-fledged operation, ‘Seok-chang (Koh Chang-seok), a legendary tomb robber, who robbed JoJo’s tomb, ‘Dae-hyun (Shin Jeong-geun)’, a deaf bomb maker, ‘Jae-jun (Song Jong-ho)’, a master of transformation, Cheol-ju (Kim Gil-dong), a bullet delivery wagon driver faster than it looks, and Su-ryun (Min Hyo-rin), the queen of diving, who plays a decisive role in a moment of crisis, join, and the rare ice war is doubling interest and laughter. In addition, from the idea bank 'Jeong-gun (Chun Bo-geun)', an idea bank with a childish tone, and 'Nan-i (Kim Hyang-gi)', the originator of rumors, each character is armed with personality and charm that cannot be easily overlooked in <Gone with the Wind. > It will provide special pleasure with the perfect teamwork of the specialists.

20 million box office actor Cha Tae-hyun's first historical blockbuster
All the box-office actors representing each generation are here!
Responsible for laughter, fun, action and spectacle!
Starting with <My Sassy Girl>, which mobilized 4.8 million people, <Speeding Scandal>, which broke through 8 million viewers nationwide, and <Hello Ghost>, which captivated 3 million viewers nationwide with pleasant laughter and touching emotions, captivating 20 million viewers, representing Korea. Cha Tae-hyun, who has established himself as a box-office actor. In particular, Cha Tae-hyun, who has been loved by the audience for his unique natural and comfortable charms while performing unrivaled in the comedy genre, will challenge himself in his first historical drama and show an upgraded image. In particular, this work is the first meeting between actor Cha Tae-hyun and a blockbuster, and the fresh synergy that his charm and the scale of the work will meet is raising expectations. Above all, Cha Tae-hyun's strong presence, which adds the charisma of a genius strategist to his unique humor, will shine even more in this work.

On the other hand, <Gone with the Wind> features representative actors of all ages, providing a variety of fun without missing out on laughter, action, tension and spectacle. Oh Ji-ho, who appeared as a representative in his 30s along with Cha Tae-hyun, returns to the screen as a character that adds a serious aspect to the intense masculine beauty of [Chuno]. And Min Hyo-rin, who has a youthful charm in her twenties, is expected to show a strong yet mature side different from <Sunny>, which broke through 7.3 million viewers, radiating innocent and lovely charm in this work. It is expected that Seong Dong-il, Shin Jeong-geun, and Ko Chang-seok, who are the most popular Chungmuro actors in their 40s, will decompose into Joseon's best water drinker, bomb maker, and the first man in tunnel digging, respectively, to perform once again in comics. In addition, <Gone with the Wind> is the most diverse multicasting movie among recent multicasting movies, with a wide audience, including 10 million child actors Cheon Bo-geun of Haeundae and Kim Hyang-gi, who speaks a good Jeolla dialect. will captivate

From the first ice CG in Korea to the perfect reproduction of the Joseon Dynasty!
<Haeundae> CG team, <The Chaser> shooting, <The Good, the Bad, the Weird> costumes, etc.
The best staff in Chungmuro are on the go!
As the central subject of the film is 'ice', the main point of the new attraction of Gone with the Wind is the large-scale ice that surprises. However, it is impossible to maintain the shape for a long time while filming is in progress, and since the size of ice is huge, reaching 30,000 tablets, Mopack Studio, who was in charge of CG for <Haeundae>, participated and started full-scale ice CG for the first time in Korea. From the expression of ice itself, which is sensitive to the angle and refraction of light, to the ice action in which large-scale ice is poured down at once, the cool ice CG that can only be seen in <Gone with the Wind> will provide the audience with a different kind of fun.

In addition, since it is a blockbuster work set in the Joseon Dynasty, the best staff from Chungmuro mobilized and paid more attention to perfection. Cinematographer Lee Seong-je, who has captured the breath of breath-taking movies on a dynamic and stable screen through works such as <The Chaser> and <The Yellow Sea>, took on the shooting of the first historical drama work through <Gone with the Wind> to create a more dynamic visual beauty. will show Here, from the historical costumes to <The Good, the Bad, the Weird>, <The Joseon Detective: The Secret of the Helmet Flower>, <The Ultimate Weapon: Bow> and <War Against Crime>, creative and stylish costumes that transcend nationalities and times Costume director Kwon Kwon-jin, who has presented various costumes, perfectly expressed the personality of the greatest 'swindlers' of the Joseon Dynasty in <Gone with the Wind> through costumes. Production designer Lee Mi-kyung, who participated as the art director of <Taegeukgi Flying>, added realism to spaces such as tunnels, a secret route to steal ice from the ice warehouse serving store during the Joseon Dynasty, and music director Kim Tae-seong of <The Last Weapon Bow> created <Wind>. Gone with > is expected to focus on the work with music that utilizes the genre and character of the film.

In this way, <Gone with the Wind>, in which the top staff in each field, such as photography, art, costume, and CG, who have led Chungmuro's representative masterpieces and box office hits, foreshadows the birth of a well-made historical drama blockbuster, will increase the trust and expectations of the audience.