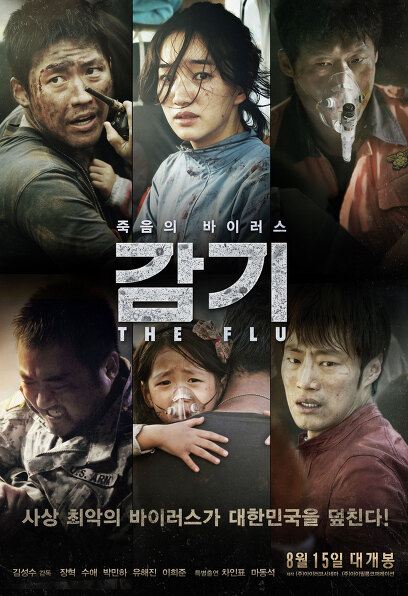 Respiratory infection_ infection rate 3.4 per second_ fatality rate 100%
In the summer of 2013, the worst virus ever attacks Korea!

A man carrying smuggled workers to Bundang is infected with an unknown virus and dies. Less than 24 hours after the patient's death, the same patients are appearing one after another at all hospitals in Bundang. The death toll increases exponentially, but the citizens of Bundang remain defenseless and exposed to the virus. The government issued a national disaster to prevent the second spread of the worst virus ever, with fear of infection swarming the Republic of Korea, infecting 3.4 people per second through respiratory tract, and killing within 36 hours, and finally decided to close the city. drop the Those who are quarantined without a chance to escape are engulfed in chaos, and those who want to save their loved ones in a disaster and those who want to survive the death start a battle for their lives…

However, there is virtually no cure that can protect our body from these various viruses.
The various medicines that are commonly believed to be cold medicines actually only serve to relieve common cold symptoms. Variants and evolution of various viruses are constantly threatening mankind. Under these circumstances, what if another deadly cold virus that has never been discovered comes to us?

The moment you breathe, disaster begins!
You are no exception to the fear of infection!
<The Cold> is the first Korean film to deal with the fear of being infected by a virus. The fact that a 'cold', which has been accepted without aversion in daily life without being aware of the danger, can in fact become a huge virus that threatens the survival of mankind, reverses the general meaning and doubles the shock. The virus in the movie <Cold> is highly pathogenic avian influenza H5N1, which experts are paying special attention to, expecting it to be fatal to mankind. After expert advice and historical evidence, it was reborn as a virus that can infect from person to person. The catastrophe of the movie <Cold>, which occurs when this virus, which is infected through the respiratory tract and accompanied by cough, erythema, and high fever, is discovered in Korea, is portrayed in a more realistic and shocking visual than imagined, and it is portrayed in human dignity and the value of life. poses serious questions about

In the summer of 2013, through the movie <Cold>, the word 'cold', which is very common and commonplace, is expected to be changed into a huge fear that threatens survival and safety.

*Avian influenza virus
: A virus that experts select as the first candidate for a pandemic that will threaten humanity. Last year, researchers from the United States and the Netherlands demonstrated that these concerns could become a reality by creating avian influenza mutants that infect humans in the laboratory. To date, AI has a fatality rate of 59%, far higher than the fatality rate of the Spanish flu, which killed 50 million people in the early 20th century. Experts warn that more people can get infected faster than in the past as people are free to go abroad.

*Pandemic
: In Greek, 'Pan' means 'everyone' and 'Demic' means 'people'. It is the highest level of 6 in the World Health Organization (WHO) epidemic alert level. The WHO declared the 2009 H1N1 influenza as the first pandemic of the 21st century.

“When something happens that you can’t stop on your own,
extreme fear, or loss of humanity,
Nevertheless
I wanted to portray people who do not lose their humanity and humanism.”
Ordinary citizens in <Cold> are suddenly in a state where the space they live in is contaminated with a virus and their lives are threatened. In addition, the government shuts down the city to prevent the spread of the virus, and people who are trapped in a closed space without a way to escape gradually become altruistic or selfish with a sense of duty to protect themselves and their families from a beleaguered situation. . The film captures this series of processes through the eyes of the characters. Director Kim Seong-soo frequently asked the question, 'If something like this really happens to me, how will I react?' The resulting characters in <The Cold> make the story richer and more enjoyable to watch. In addition, the acting ensemble of actors who perfectly digested the character will form a consensus with the audience and will double the shock and emotion in the movie.

The visual of <Cold> created more realistically and delicately than the real thing.
In order to express the virtual virus disaster situation in the movie more realistically, the most important thing for the production team is the sense of reality!
For the real fear of infection in <Cold>, which deals with the process of a city being devastated by a cold virus that spreads rapidly just by breathing, and the struggle of people who struggle to survive in it, the production team worked with infectious disease specialists from the pre-production stage. After a long study of historical evidence and advice from various experts, such as officials from the Korea Centers for Disease Control and Prevention, and how to implement those scenes, the realistic level of perfection has been improved.

The people who made the first infection disaster blockbuster <The Cold> in Korean cinema
Delicately and passionately captures those trapped in a closed city / Cinematographer Lee Mo-gae
Expressing the terrible sight of a city covered in death and horror / Art Director Park Il-hyeon
Reinventing Bundang Covered with Death / Computer Graphics Force
Director Kim Seong-soo, who grabbed the megaphone for the first time in 10 years, wanted to realistically show how a familiar place turns into a space of death due to a virus. For this, the best technology in Korea was mobilized not only for the composition of the set, but also for camera walking, special effects, and CG. First, Art Director Park Il-hyeon realistically portrays the process by which places familiar to the audience, such as supermarkets, parks, and sports complexes, become unfamiliar in a disaster situation. Then, cinematographer Lee Mo-gae captured the events taking place in this space more realistically than in reality through unfixed camera walking. The work of the CG team added to this creates a more complete re-creation of the city of death that has been turned into ruins, increasing the fear of actual infection. <Cold>, completed by the best production team in Korea, will give the audience a thrill this summer with shocking horror, huge scale, and unprecedented reality of infection.