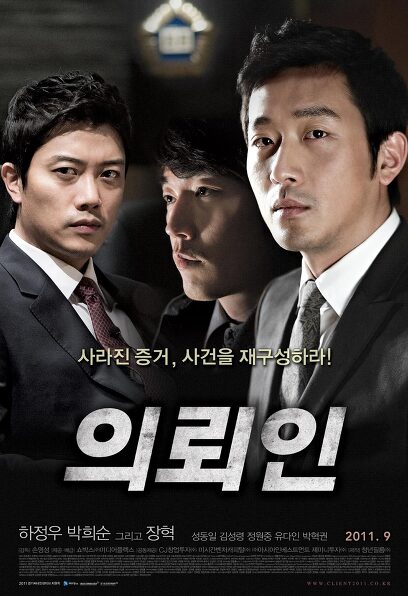 A bed soaked in blood, a missing body, and a murder charge…
No one can be trusted until the trial is over!

A murder case without a body, but the suspect caught under obvious circumstances is the murderer’s husband.
The fierce battle between the lawyers and prosecutors involved here and their final objection to the jury.
A fierce court battle with no predictable outcome, we invite you to the jury!

[ About Movie ] Three-color transformation of Korea’s best hit makers, Ha Jung-woo, Park Hee-soon, and Jang Hyuk
Their first encounter! The most anticipated Korean film in the second half of the year to show explosive synergy
It is the meeting of Ha Jung-woo, Park Hee-soon, and Jang Hyuk, the leading actors of Korea’s best hit maker, that <Client> is receiving the most attention. The fact that the three actors, who are showing their outstanding abilities as one-top lead actors based on deep trust in the audience, met in one movie is enough to attract attention. In addition, through <Client>, it is expected to change 180 degrees from its predecessors, adding to the anticipation.

Ha Jung-woo tries to change his image by appearing as a lawyer who proves the innocence of a client with the belief that he can reverse an unfavorable situation in the movie. In the past, he left a deep impression with bold, rough characters such as the serial killer in <The Chaser> and the contract killer in <The Yellow Sea>. will be presented.
Park Hee-soon plays a prosecutor who tries to prove the suspect’s guilt with the certainty that he can win. A naughty criminal detective in <Seven Days>, a former soccer player who listens to the scammers in <Barefoot Dreams>, a gangster in <Operation>, etc., removed the characteristic cleverness shown in previous works, and returned to the screen with a cool and serious face. come. He foretells a fierce battle with Ha Jung-woo, a lawyer, with a perfect performance as much as the refined image presented as a rational prosecutor.
In addition, Jang Hyuk is aiming for the screen box office following the dramas <Chuno> and <Midus>, which have both received ratings and popularity. In particular, the appearance of the only suspect pointed out by all circumstances, a character opposite to the elite lawyer in <Midus>, stimulates curiosity and forms a perfect triangle with the other two actors, conveying tension.

In particular, <Client> is the first work the three actors met. The three actors boast brilliant filmography with more than 10 years of acting experience, but they have never worked together in any previous work. However, all three actors said with one voice, “We met for the first time on set, but we were so familiar and we got along well. It was an honor to work with great actors,” confirming their mutual respect and boundless trust. The fantastic acting breath created based on this will lead to explosive synergy, enhancing the film’s perfection, and will be the best factor in making <The Client> stand out as the most anticipated Korean film in the second half of 2011.

The ‘court thriller’ promoted by <Client> is a popular genre in Hollywood movies and American dramas called ‘mids’, but it is true that it is difficult to find representative works among domestic works. In foreign countries, ordinary citizens actually participate in the trial process, and the background is more familiar, whereas in Korea, ‘law’ is difficult and complicated, and the level of sensibility is weak, so it is not possible to approach it in an interesting way. However, in Korea, as participatory trials were introduced in 2008, trials have emerged as a more popular and general interest.
Accordingly, <Client> brought such a jury system as a film material in earnest. The jury system is defined as ‘a system in which ordinary citizens, not legal experts, participate in a trial or prosecution as a jury and make a verdict on matters of fact’. In other words, the verdict of guilt or innocence of a suspect is decided jointly by the jury, not by the judge alone. This setting will deliver a vivid sense of realism as if the spectators were part of the jury, watching the fierce battle between prosecutors and lawyers repeating objections from their respective positions with the suspect in between.

A well-made legal thriller film that adds visual pleasure to the solid logic and fast-paced development of <Client>, which invites the audience as a jury to deliver a vivid sense of realism, the tension that makes you wonder about the verdict until the end, and the tension that you can’t take your eyes off of. You can look forward to the birth of

Pay attention to director Son Young-seong, who will continue the storm of new directors in 2011.
From Sung Dong-il to Jung Won-jung, Kim Seong-ryung, Park Hyuk-kwon, Yoo Da-in… Supporting actors & talented rookies all dispatched
In 2011, in the Korean film industry, the performances of new directors with less than three directings led the box office boom in theaters. In January, with director Kim Seok-yun of <Detective of the Joseon>, which drew 4.8 million audiences to the theater, in May, director Kang Hyung-cheol’s <Sunny> drew more than 7.2 million viewers, making it the highest-grossing Korean film of 2011. has risen to In addition to these, ‘Jang Hoon’ and ‘The Chaser’ followed by ‘The Chaser’ and ‘Na Hong-Jin’, who produced <The Yellow Sea> after <A Movie is a Movie> They are representative new directors who created This kind of performance by new directors seems to be the result of adding fresh directing power based on the basics solidified through a long preparation period and planning power that grasps the point of interest of the audience.
Here, director ‘Son Young-seong’ of ‘The Client’ cast his vote for the new director sensation in the second half of 2011. Rookie director Young-seong Son was recognized for his delicate directing skills and outstanding storytellers with <The Pillagers>, which was released in 2009. <The Predator> is the director’s graduation work from the Korea National University of Arts and was invited to the Busan International Film Festival and Seoul Independent Film Festival, and was also introduced at the ‘Indie Forum 2009’. Through <Client>, he will show new style, form, and narrative through unrookie directing skills, proving the potential of the legal thriller genre that could not be found in existing Korean films.

One more noteworthy thing about <The Client> is the joining of the powerful supporting actors who left a deep impression in each work, radiating a presence that is no less than that of the lead. Jung-woo Ha in <National Team> and Dong-il Seong, who created a great myth by fantastic breathing with Jang Hyuk in <Chuno>; ‘Park Hyuk-kwon’ is the main characters. In <Client>, the lawyers and prosecutors, respectively, will engage in a sharp confrontation to lead the trial to victory, increasing the drama’s completeness and increasing the fun of the film. In addition, Yoo Da-in, a talented rookie who recently appeared as a comet in the film industry of actress Ki-geun, and was praised for her acting skills in <Hyehwa, Dong>, will also appear as a character holding an important key to the case in <Client>, which will make the film richer. .

A dense and solid story that repeats reversals as the trial progresses
The birth of a famous courtroom scene that will remain in the memory of the audience forever
What makes <Client> even more exciting is the meticulous logical confrontation between the prosecutor and the lawyer to uncover the truth of the case, and the unpredictable end of the story as the trial progresses. Director Son Young-seong, who directed and adapted the film, said, “The client takes advantage of the genre’s characteristic of a legal thriller, and maintains the thriller’s strengths of tension and speed, while maintaining the dramatic story of the characters of the lawyer, prosecutor, and suspect in it. We focused on the story,” he said, emphasizing the importance of the story. As can be seen from the hot reaction of the trailer that has already been released, the fierce confrontation in which logic and logic collide against the background of a courtroom, which has not been seen in Korean movies, stimulates the curiosity of the audience with a fresh story structure unique to <Client> and is a box office hit. is expected to cause

In particular, <The Client> will use the court space to present the best scenes from Korean films that will be talked about for a long time. The large courtroom set where the final objection takes place is reborn as a cinematic space in which the emotions of the characters are sharply contrasted, escaping the unique pressure of a real courtroom, maximizing immersion. And you should pay attention to the final trial in which the truth of the events taking place in this space is revealed. The final counterargument between the prosecutor and the lawyer in order to obtain guilt or innocence from the jury in their respective positions is enough to elevate the tension that makes the audience sweat and the thrill of the moment the ending is revealed. do.

Is Han Cheol-min, the only suspect in the murder case guilty? Or is he innocent? At the end of September, the truth of the case is revealed!