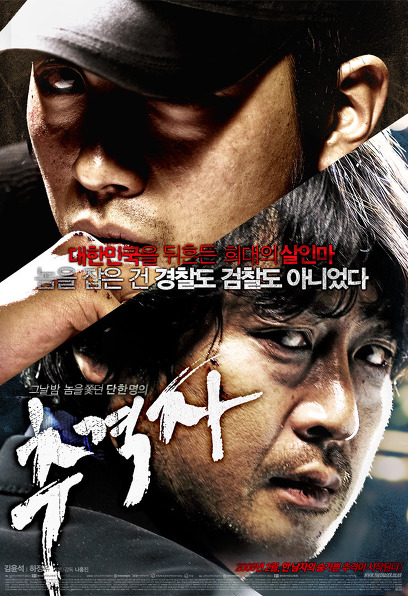 “4885… are you If you get caught, you die.”
Jung-ho, a former detective who runs a business trip massage parlor,
The women they have been taking recently disappear one after another, and they find out that the phone number of the customer who called Mi-jin, who left a while ago, matches the last number the women who disappeared. But even Mijin lost contact… … While wandering in search of Mi-jin, Joong-ho accidentally bumps into 'Young-min', sees blood on his clothes, intuitions that Young-min is him, and catches him after chasing him.

“I didn’t sell it. I killed… But is she still alive?”
The police station is turned upside down by Young-min, who calmly confesses a shocking confession that he killed all the missing women. Young-min smiles calmly saying that Mi-jin will still be alive in front of the police rushing around. However, there is no evidence to hold Young-min in captivity. The police, obsessed with the offensive, focus on finding evidence rather than Mi-jin's life or death, and Jung-ho, the only person who believes Mi-jin is alive, sets out to find Mi-jin… …

A rare murderer who shook the Republic of Korea, the night he was caught…
The only <chaser> who was chasing him

A rare killer who shook the Republic of Korea,
Neither the police nor the prosecution caught him that night!

In Korean society, interest in a series of serial murders that terrorized Korean society is quickly forgotten by the public and society before the tears of the victims or their families have dried up. In an extremely individualistic society that values only the material interests of individuals and is indifferent to the surroundings and society, “Who were the victims? What kind of efforts did I and society do to save them?” It became a society that does not even think. Starting from an ordinary person who sees this social phenomenon, <The Chaser> is not a provocative materialistic film about a shocking murder case, but a story about a man in the process of chasing after a man who is threatened by the dignity of a noble life. It is a film depicting an absurd situation and a sloppy social structure system.

Ji Young-min, a serial killer who commits brutal murders only against women and the elderly who have no choice but to make a living through business trip massage. Eom Jung-ho, who runs a business trip massage parlor after committing corruption as a rotten and corrupt police officer and resigning from his job. In the process of becoming the only man trying to save Mi-jin, the last victim of a serial murder, Eom Joong-ho, who can never call society 'justice' or 'goodness' It's a movie that makes you think again.

In 2008, <The Chaser>, a self-portrait of 21st century Korea, is coming!
Set in Seoul, South Korea, the film depicts the breathtaking story of the night when a rare killer was caught. On that night when everyone was paying attention only to the criminal, the city with a beating heart to prevent the last sacrifice of a serial killer. It is a story about a man who raced. <The Chaser> is 'Who is the culprit? Can you catch the criminal?' It is a new type of film with a completely different approach from the general story structure of existing Korean films dealing with crime and murder.
The Chaser pays attention to the reality of the ironic social structure in which the criminal is not caught even though he knows that he is the culprit, and the victim is dying in apathy and indifference through the story-type overthrow in which the identity of the criminal is revealed at the beginning. Through the differentiation of this point of view, <The Chaser>, which draws the inner transformation of the only 'chaser' far from the typical hero, in a captivating way, transfers the desperate feeling of a man chasing a criminal to the audience, and the heart of the audience. Through the sense of urgency and heartbreaking emotion that makes people flutter, it will be a film that will contemplate the self-portrait of Korean society in the 2000s with the audience.

Kim Yun-seok – Ha Jung-woo, the best actor encounter!
Show off the best transformation!
Kim Yun-seok was evaluated as an actor who perfectly portrays any role, creating a villain character with a unique charm in the history of Korean cinema. He transforms into 'Jung-ho', the president of a business trip masseuse and a chaser after a rare serial killer, and once again challenges the best character in the Korean film industry. And the Korean film industry and a new star who has always surprised the Korean film industry with choices that exceeded expectations, such as Yoon Jong-bin’s The Unforgiven, Kim Ki-duk’s Breath, and Time, the drama Hit, and the Korean-American joint film “Second Love”. Ha Jung-woo, the most anticipated lead, will show off a shocking acting transformation that will never happen again as a rare serial killer 'Young-min'. The meeting of the two actors, who tried to make a radical transformation that overturns the existing image, in itself, inspires great expectations and trust in the film. Through <The Chaser>, Kim Yun-seok and Ha Jung-woo will fill the screen with a new look, intense charisma, and full-fledged acting full of sincerity. You can expect the birth of two big actors who will lead the Korean film industry in 2008.

A new video with breathtaking speed and realism!
Opening the horizon of 'Korean hyper-realism' video!
In order to convey a man's breath-taking pursuit of a woman to save a woman and the tension of the day as it is, <The Chaser> presents an unprecedented real and speedy video that can be called 'Korean hyper-realism'. The harsh, realistic depiction that does not miss even a single detail and the rich video of <The Chaser>, which has the maximum number of cuts in a scene of 200 or so, elevates the reality of the shocking case of serial murder and the desperate feelings of the main character Jung-ho to the climax at the same time as a cruel society. It conveys the message of the film more clearly about the indifference and absurdity of And for six months, the filming of <The Chaser>, which started as a relentless hunting work to cover all the alleys of Seoul, was a large-scale night shot using a lighting crane to the top of a hill where it was difficult for a single vehicle to pass, and control the complicated alleys for one night It was completed with 85 episodes of filming over 5 months, including the difficult filming site that lit up the quiet residential area like broad daylight. <The Chaser>, created by about 100 staff and actors running around Seoul, is an organic space that lives and breathes itself, not just a background, a space where a violent chase takes place over a murderer that is in front of you but cannot be caught. paid The vivid image of Seoul where splendor and darkness coexist, realistic images that seem to resonate in your ears that night's harsh breathing, and the movie <The Chaser> is alive with tension that you can't take your eyes off of. It will captivate the eyes and minds of the audience with a powerful new visual aesthetic that has not been seen in previous Korean films.

The debut film of director Na Hong-jin, a giraffe in the short film industry!
A meeting of new prospects and veteran staff!
He is highly acclaimed as a storyteller and a visualist who creates new and outstanding images without missing the artistic message, such as <The Perfect Sea Bream Dish>, which won the Best Director Award at the Mise-en-scène Short Film Festival, and <Han>, which won the Best Short Film Award at the Grand Bell Awards. Director Na Hong-jin, who has been attracting attention as a giraffe in the short film industry. Seeing a woman walking down the street at night with few people, <The Chaser> started out of intense curiosity, 'If that woman suddenly disappears in front of my eyes by a certain monster, will I be able to find it without any clues or witnesses?' It is director Na Hong-jin's first feature film debut. The intense scenario of <The Chaser>, created by director Na Hong-jin, who was so immersed in the story to complete the first draft in one day, includes director Na Hong-jin's best partner, cinematographer Lee Seong-jae, who received attention for the stylish video of <The Perfect Sea Bream>, and Those People> <The Elegant World> <Gidam> Art director Lee Min-bok, Korea's best production designer who created a new space for each work, <Home… > We were able to gather veteran staff of Chungmuro, including lighting director Lee Cheol-oh, the magician of light from <Woman, Jeong-hye> and <The Legend of Ttukbang>. <The Chaser> will be created by the young director Na Hong-jin, who is armed with new senses and possibilities, and the best staff who guarantees perfection.