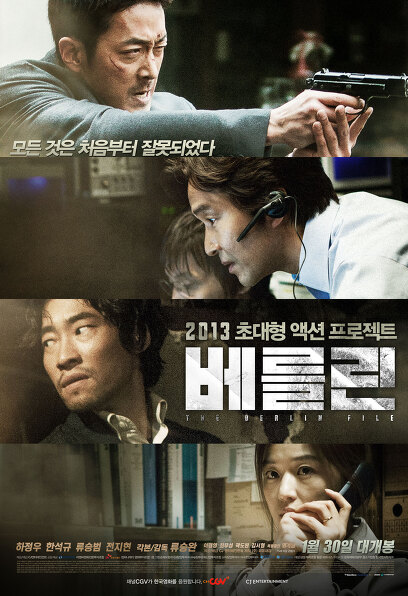 Berlin, a doomed city with a huge international conspiracy hidden.
Jeong Jin-soo, a resident of the National Intelligence Service, finds out about the existence of Pyo Jong-seong, a so-called 'ghost' secret agent whose nationality is unknown and his fingerprints are not even detected while inspecting an illegal weapons trading site. Jung Jin-soo, who is pursuing him to uncover his identity, finds out about the huge international conspiracy behind him and falls into an out of control crisis.
Meanwhile, Dong Myeong-soo, dispatched to eliminate Pyo Jong-seong and take control of Berlin, drives his wife Yeon Jeong-hee as a traitor, using this as an excuse to suffocate and threaten all of Pyo Jong-seong. Pyo Jong-seong follows Yeon Jeong-hee to prove Yeon Jeong-hee's innocence in the face of Dong Myung-soo's threats, but gets confused when he finds out about his wife's unexpected secret…

A breathtaking chase between those who chase each other, caught up in an international conspiracy and their own goals!
In 2013, a super-large action project unfolds!

“It is said that 6 out of 10 people on the streets of Berlin during the Cold War were spies.
After the end of the Cold War, the spirit still remains intact.

In Berlin, where the tragedy of the times remains
I wanted to tell the story of those secretive and dangerous people who live by hiding themselves.”
– Director Ryoo Seung-wan-

Ha Jung-woo, Han Seok-gyu, Ryu Seung-beom, Jun Ji-hyun! Couldn't be more gorgeous than this!
Director Ryoo Seung-wan "I am very lucky to cast 4 actors who perfectly fit the character"
Even before the release of the super-large action project <Berlin> in 2013, Korean movie fans are gathering anticipation with the strongest casting ever. In <Berlin>, four Korea's representative actors, who have been recognized for their performances that made use of their individuality, across the CRT and screen, including Ha Jung-woo, Han Seok-gyu, Ryu Seung-beom, and Jeon Ji-hyun, will be dispatched to work together.

Ha Jung-woo, who became a box-office winner with <The Chaser>, <War Against Crime: The Golden Age of Bad Guys>, and <Love Fiction>, plays the role of a secret agent called 'Ghost', 'Pyo Jong-seong', with intense characters and spectacular action. Acting attracts movie fans. Han Seok-gyu, who is making a comeback as an NIS agent 'Jung Jin-soo' after 14 years since <Shiri>, is expected to dominate the screen with his solid acting skills and overwhelming charisma. Actor Ryu Seung-beom, an irreplaceable and talented actor, appears as a cold-blooded poker face 'Dong Myung-soo', stimulating the audience's curiosity with a fresh character that only actor Ryu Seung-beom can digest. Jeon Ji-hyeon, the heroine of <The Thieves>, which drew 10 million viewers in 2012, is expected to fascinate the audience by appearing as the interpreter Yeon Jeong-hee, who is accused of being a double spy. <Berlin>, a collection of Korean actors who are thrilled just by hearing their name, is the best cast of all time, and the fireworks show between these four actors will be the main viewing point of the movie.

Meanwhile, director Ryoo Seung-wan of the movie <Berlin> said, "I am very satisfied with the casting. I think I am lucky because it seems that all the actors who perfectly fit the character I thought have been cast.” <Berlin>, a super-large action project in which the best actors in Korea gather to perform a taut performance, has already attracted the attention of the audience just by the names of the actors, and is considered as one of the most anticipated works in the first half of 2013.

Return of Director Ryu Seung-wan of 'Action Movie's No. 1'
After 3 years of waiting after <Illegal Transaction>,
Extra large action project <Berlin>!
Director Ryu Seung-wan, who has built an unrivaled area in the action genre, is making a comeback to the screen after three years with the mega action project <Berlin> in the first half of 2013. After appearing like a comet in Chungmuro with <Death or Bad>, he has a strong personality that will remain deeply in the minds of the audience, such as <Without Blood or Tears>, <Operation Arahant Jangpung>, <Crying Fists>, <Correspondence>, and <Unfair Trade>. I've been making action movies.

Director Ryoo Seung-wan, who has established himself as one of Korea's leading film directors, has been called the 'No. This time, he is waiting for the audience with his unique detailed storytelling and the super-large action project <Berlin> of an overwhelming scale that has never been seen before. Set in the international city of Berlin, it will show the essence of a Korean-style action blockbuster like never before, featuring the chase and chase of the best actors of the time, such as Ha Jung-woo, Han Seok-gyu, Ryu Seung-beom, and Jun Ji-hyun. Here, we will disarm the audience with more upgraded scales and splendid action scenes through overseas location filming that took place over a month in Berlin and Latvia.

Director Ryoo Seung-wan, who is called a representative Korean director of the action genre, adds a dense story and new directing power to each stylish action. is expected to

The best and the best meeting!
The strongest staff in Korean cinema history! Unite for Berlin!
Director Ryu Seung-wan, martial arts director Jung Doo-hong, cinematographer Choi Young-hwan, music director Cho Young-wook! The most powerful production team in the history of so-called Korean films has come together! Thanks to this, the filming site of the movie <Berlin> is full of heat more than any other filming site.

Starting with director Ryoo Seung-wan, the number one action movie director, and martial arts director Jeong Doo-hong, the world-renowned 'best action director', the film delicately captures dynamic movements from <The Thieves> to <Tazza>, <Jeon Woo-chi>, and <Reconstruction of Crime>. Choi Young-hwan, cinematographer for 'The Magician of Vision', Cho Young-wook, music director who is rewriting the history of Korean film OSTs, starting with <Oldboy>, <Kind Venus>, <War Against Crime: The Golden Age of Bad Guys>, and <Unfair Trade> Until now, although each field is different, the best top-class staff who have made a mark in their field are united. Thanks to this, the movie <Berlin> is attracting a lot of attention from netizens even before filming begins with their fame alone. In particular, these four people are the main actors who showed off the best synergy in <Unfair Transactions> in 2010 and brought out the box office success.

Director Ryoo Seung-wan has captivated audiences with his sensuous action and deep yet thrilling drama. In this movie <Berlin>, a new movie featuring not only cool and destructive action, but also a bold story that has not been seen in other action genres, including the world's first martial arts. Martial arts director Jung Doo-hong, who has recently been recognized worldwide through <G I Joe 2> and has established himself as a global action star, and cinematographer Choi Young-hwan, who shows stylish and sensual visual beauty while freely capturing dynamic action, Music director Cho Young-wook, who has been in charge of the film and occupies a unique position in the Korean film music scene, will serve as a strong supporter.

The best and the best meeting! <Berlin>, which is showing perfect synergy with the meeting of the strongest staff in Chungmuro, is expected to become the most anticipated work in the first half of 2013.

Two-month overseas location in Berlin, Germany and Riga, Latvia
Feel the essence of the action against the backdrop of an exotic city!
One of the factors that adds a heavy atmosphere to the overwhelming scale of the movie <Berlin> is the exotic scenery abroad. Director Ryoo Seung-wan said, “I thought that if people living in secret and hiding themselves do something in this city, we can tell a lot of stories in Berlin, where the tragedy of that era is transmitted intact after going through the Cold War.” He explained why he chose it as the background of the movie. The city of Berlin becomes a space where the story of four secret agents and the international conspiracy and betrayal that surrounds them fit perfectly together, to the extent that Han Suk-kyu says, “You have to get the script for <Berlin> and this film must be filmed in Berlin.”

In fact, filming overseas for nearly two months in Berlin, Germany and Riga, the capital of Latvia, adds a sense of scale and majestic atmosphere to the film, and plays the role of another main character in the film. Exotic scenery such as the Westin Hotel action scene in Berlin that leaves a strong impression at the opening as the main action scene in the movie, Bradenburg Square where you can see the breathtaking vehicle action scene of Ha Jung-woo, and other exotic scenery such as Hackeschermarkt flea market and Offenbaum Bridge will further upgrade the sense of scale of the action and provide a splendid sight to the audience.

Meanwhile, for all these overseas shootings, the <Berlin> team conducted a location in advance with the local production team. In the pre-production process, through the photographic materials shot in the area, the space was thoroughly organized and the action concept was created to fit it, and more than ever, the focus was on matching the background of the movie and the appropriate action. It is said that they overcame the barriers caused by language barriers and cultural differences through overseas filming that lasted for about two months, and tried to capture the essence of the spectacular action with an exotic background.

Based on the grand atmosphere of the huge international city of Berlin, the movie <Berlin>, which captures the breathtaking chase of four secret agents who hide their identities, is sure to catch the attention of the audience by enriching the film with its exotic scenery. Is expected.