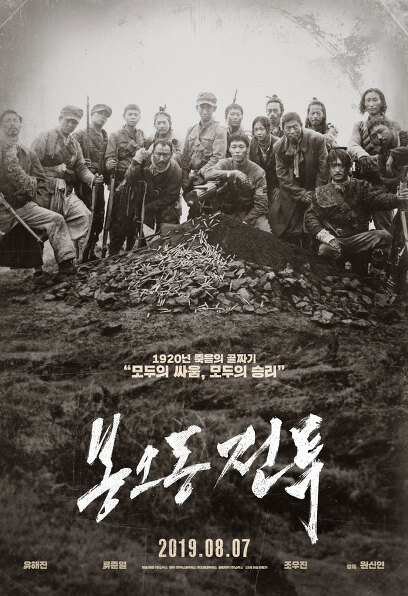 There is only one mission! Run and run, lure the Japanese into the Valley of Death!

After the March 1st Movement in 1919, the armed struggle of the independence army became active in the Bongo-dong area.
Japan began the operation to subdue the independence army, led by the Wolgang Chase Team armed with new weapons,
The Independence Army decides to use the topography of Bongo-dong to overcome the unfavorable situation.
Hae-cheol (Yoo Hae-jin), an extraordinary swordsman wielding an anti-Japanese sword, and Jang-ha (Ryu Jun-yeol), a fast-moving squad leader,
And Hae-cheol's right arm, a nimble sniper Byung-gu (Jo Woo-jin),
Through the rain of bullets and encirclement, he lures the Japanese army into the Valley of Death.
The independence army's demon-like movements and unpredictable resourcefulness crossing valleys and ridges
The Japanese are starting to panic…

In June 1920, the first victory of the independence army recorded in history
The story of being buried in the valley of death in Bono-dong begins now.

The movie <Battle of Bongo-dong> is the first film adaptation of the Battle of Bongo-dong in June 1920, when the combined unit of the independence army won the first large-scale victory against the Japanese regular army. Director Won Shin-yeon said that he was immediately fascinated by the battle of Bongo-dong, the history of the first victory achieved by all, not just one hero. “My body reacted first before my heart accepted it. As I read the script, I got goosebumps, clenched my fists, and sat up repeatedly several times. It felt like I became the independence army of that era.” He recalled the hot moment when he first encountered <Battle of Bongo-dong>. At that time, Bongo-dong was full of unknown independence soldiers from all over the country who flocked to find land to tread on, land to farm, and land to be buried. There have been many stories of heroes who sacrificed their lives for independence, but there are not many stories of unnamed heroes. <Battle of Bongo-dong> is a movie about the time when a farmer yesterday became an independent soldier today and lived as an unknown hero and their victory. The battle of Bongo-dong was the victory won by the fierce resistance of those who could not be remembered and did not leave even a single line of record. Director Won Shin-yeon said, "So far, most of the films have dealt with the history of damage, domination, and humiliation. However, the Japanese colonial period was not a period filled with despair, but an era in which we can talk about hope and courage. It is not a painful history that we want to ignore, it is a history of resistance that we should remember.” The story of the independence soldiers who gathered from all over the country and fought with their lives under one will, and their first victories, will be with us in August.

to the valley of death
Attract the Japanese Army!
Completion of a sprint action full of breath and excitement

A desperate lure that crosses ridges and valleys! Run and run again!
In June 1920, a victory that no one expected was born in Bongo-dong. Hundreds of Japanese troops gathered to sweep up the independence forces in Manchuria, but the forces of the independence army were insufficient to fight them. With the infamous Wolgang Pursuit, the infamous Wolgang Chase, and the Namyang Guards and elite Japanese troops armed with various new weapons, the Independence Army uses the topography of Bongo-dong, which they know best, to create a fatal operation.

The movie <Battle of Bongo-dong> depicts the process of running and running to the valley of death in Bon-o-dong, luring and isolating the Japanese soldiers, and winning them over in a breath-taking and energetic way. The fierce action against the Japanese army continues without a break through unpredictable movements that repeat ambush and attack using ridges and valleys as weapons. The blood and sweat of the protagonists sprinting through the rugged valley to avoid the pouring bullets makes even the spectators breathless.

Find the perfect Bongo-dong terrain! Location 15 months!
Action passionate performances of actors created by will and fighting spirit!
Based on the records of the independence army's preemptive attack and battles using harsh terrain and climatic conditions, the production team focused on realistically capturing the desperate running of the independence army, their lures, and the dangers approaching every moment. In order to find a place similar to the topography of Bono-dong, we invested more than 15 months in the location alone, and after drawing each situation in detail with pictures, we took the pictures according to the camera angle and angle. The actors' will and effort also played a big part in the high-quality action. Yoo Hae-jin became one with Hwang Hae-cheol of the independence army with a realistic action wielding an anti-Japanese sword with her whole body, and Ryu Jun-yeol challenged without fear from a desperate run to the first wire action, creating Ryu Jun-yeol's running action. Jo Woo-jin also played an important role in showing the true character of a shooter who aims at a muzzle with agility. The sincerity and passion of director Won Shin-yeon and the three actors, who portrayed the nameless independence fighters who ran and ran and lured the Japanese to the Valley of Death in Bono-dong, and their resistance and battle who did not spare their lives, meet on the screen going back 99 years. .

Hae-Jin Ha X Jun-Yeol Ryu X Woo-Jin Jo
Return to the Unknown Independence Army!
The triumph of the day 99 years ago, drawn by the three actors
Director Won Shin-yeon, who said that the most important principle in casting was sincerity, sought an actor who understood and expressed the character more deeply than anyone else. The friendly image of an unknown independence army character rather than a known hero was also a major factor in the casting. As a result, the three actors, Yoo Hae-jin, Ryu Jun-yeol, and Jo Woo-jin, who were reassured just by their names, met us as the independence fighters who roamed the valley of death in Bongo-dong 99 years ago.

Yoo Hae-jin, who is unmatched in terms of reliability, plays Hwang Hae-cheol, an independent soldier. Hwang Hae-cheol, a humorous yet loyal and loyal independence fighter, is not afraid of his own death, but he terribly treasures the lives of his younger brother Jang-ha and his fellow independence fighters. He plays the role of the elder brother of the independence forces and leads the atmosphere. Even in front of the Japanese army, Hwang Hae-cheol speaks with a warm gaze, and Yoo Hae-jin becomes Hwang Hae-cheol as if wearing his own clothes. In particular, he showed a brilliant charisma when he fiercely charged with the blade of a sword toward the enemy, and he said, "I wanted it to be an action for survival that is realistic and really trying to survive." . Yoo Hae-jin, who decided to appear as soon as he received the script, who was a pronoun of modesty, returns as a hot independent army with <Battle of Bongo-dong>.

Ryu Jun-yeol, who has established himself as an irreplaceable actor by constantly filling his filmography, has become Lee Jang-ha, the squad leader of the independence army this time. Inspired by the characters of the real independence army, Lee Jang-ha is a wolf-like figure who leads the group. He has a hot heart than anyone else, but he judges the situation in the coolest way and throws himself away. For the mission, Jang Ha, who only looks ahead, meets Ryu Jun-yeol, and is finished with a character that is sharp and wants to be cared for. In addition, through <Battle of Bongo-dong>, Ryu Jun-yeol challenged not only the sprinting action that took his breath away, but also the first wire action in his life. “I filmed hanging from the stunt team’s fingertips, and I realized that if we trust and trust each other, we can have fun filming again. There were a lot of hot moments when everyone was in harmony like this,” he said.

Jo Woo-jin, who showed fresh changes in each work with his excellent presence and acting, once again created a delicious character Ma Byung-goo. Byeong-gu, an independent soldier from a magical background, is Hae-cheol's right arm, who is fluent in his shooting skills and Japanese interpreter, and is a humorous character that gives vitality and relaxation to the drama. Jo Woo-jin, who always creates unexpected chemistry with other actors, radiates a pleasant chemistry with Yoo Hae-jin in <Battle of Bongo-dong>. Byeong-goo, who always fights with Hae-cheol, but who loves Hae-cheol more than anyone else, met Woo-jin Jo and added a sense of depth. Jo Woo-jin, who said, “I tried to get used to the gun without letting go of my hand even before filming and during the waiting period,” adds tension to the story with his sharp shooting technique in which the body reacts first at the decisive moment. The first victory recorded in the history of the independence army 99 years ago, Yoo Hae-jin, Ryu Jun-yeol, and Jo Woo-jin will return as the main characters who won historical victories, giving the audience an unforgettable moment.

First, Choi Yoo-hwa, a rising star in Chungmuro, took on the role of Ja-hyeon, a female independence fighter. Choi Yoo-hwa captures the strength of Ja-hyeon, who joined the independence army after being imprisoned after the March 1st Movement from head to toe. With a gun weighing more than 5 kg, he sprinted all over the mountain with the independence army and challenged action scenes in the water. Child actors who performed as passionately as adults are also noteworthy. Seong Yu-bin, who showed solid performances in <Daeho>, <Along with the Gods-Crime and Punishment>, and <I Can Speak>, acted as a dog poop who volunteered for the independence army after losing her parents. You can also look forward to Seong Yu-bin's mature performance, after being praised by director Won Shin-yeon as "an actor who will definitely take responsibility for the future." Lee Jae-in, who received attention for the movie <Sabaha>, played the role of Chun-hee, who lost her brother to the Japanese in front of her eyes. She has fascinated director Won Shin-yeon from the audition with her acting that can breathe life into lines, and she did her part without disrespecting the praise of director Won Shin-yeon, who gave a thumbs up saying, "Acting genius."

Japanese national actor Kitamura Kazuki, well known in Korea for the movie <Cat Samurai>, plays the role of Jiro Yaskawa, the commander of the Pursuit of the Moon River, exuding a creepy aura even off the screen. Japanese actor Hiroyuki Ikeuchi adds to the realistic taste of the movie by playing Kusanagi, the head of the Pursuit of the Moon River. Here, as Yukio, a young Japanese soldier who became a prisoner of the independence army, Kotaro Taiko, who performed impressively in director Makoto Shinkai's <Weather Child>, was selected and performed brilliantly. Actor Park Ji-hwan plays the role of Arayoshi, the commander of the Namyang Guard, who is full of ambition, and breathes new tension into the play.

The actors who completed <Battle of Bongo-dong> do not end here. The independence and Japanese military extra actors who made the action scenes even more dazzling worked hard inside and outside the camera. In the Valley of Death scene leading up to the climax, 1,200 stuntmen and auxiliary performers participated in episode 8, providing strong nourishment for the film. They also had passionate staff behind them. While filming continued for a place suitable for the rugged Bongo-dong terrain, the staff members shared filming equipment and climbed the mountain together, giving each other great strength throughout filming. This is why the <Battle of Bongo-dong>, created by those who fought a heart-warming battle with one heart and one mind, is more meaningful.