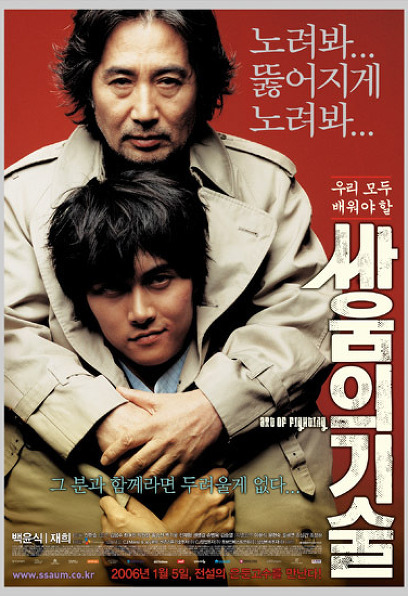 That's right, I remembered it! 'The art of fighting'

Super climax sloppy high schooling! Meet the Secret Master of the Reading Room!
Song Byeong-tae, a timid high school student who constantly incites beatings, whose routine is to live with being beaten. I read all kinds of books dreaming of living a peaceful life without getting hit, but every day is a series of hardships. Then, one day, he finds a strange man living in the special room B of the Daemyung Readings… Finally he has arrived!

"Fighting skills? Anyone who's been hit already knows, nigga!"
Oh Pan-soo. A legendary master who is hiding with his own life skills (?) waiting for the day he will leave for the blue sea of Mexico. 15 years ago, the master of the masters who conquered the whole country with his legendary fighting skills! Although he seems indifferent to everything, Byeong-tae's hidden talent piques his interest. But… how easy it is to break the fear of a person who has only been beaten! In a world where 'living' itself is a series of battles amid lack of application skills and lack of experience, can Byeongtae be reborn as a true master? What will Pansu really teach Byeongtae?

<The Art of Fighting> Orthodox Interpretation

100 minutes declaration! – cool! new! helpful!
The birth of a practical action that the whole nation should see and learn!

Have you ever seen yourself with clenched fists look shabby? Have you ever felt full of resentment and the desire to become stronger? Here is a movie that claims to be the world's first practical action and declares that 47 million people across the country must learn. Practical action <The Art of Fighting> that comes to mind even more if you look at it right. An extraordinary film that promises hope and new joy to all the underprivileged in the world will be released to the public.

One famous scene – The beating boy who comforts himself that it is a lucky day even after being hit by the 21st makes an appeal the moment he finally meets 'the person'. “I want to be strong! ” Next is the answer of 'that person': “Do you… do you have money at home? It costs a lot of money to fight.” He never gestures excessively, weighs something to say, exaggerates to be funny, or squeezes emotion. I don't use any tricks of such a shallow sewage. However, the fight between the boy, who had been a regular for 17 years, and the absolute master, who has mastered the technique for 50 years, is wonderful. And in their fights, the real tricks, life skills, and wisdom of victory are overflowing with deep insight and humor. you! Are you dreaming of a life that doesn't fit? Do you want to be strong? Armed with a new style, new value and pleasure, the practical action <The Art of Fighting> promises to be your friend.

A clash of teenage boys vs 50-year-old fighters! Inducing beating, poor high school vs. legendary reading room recluse meeting!… The movie <The Art of Fighting> can be defined in this way. But what if that's all? We wouldn't have any reason to slap our knees and watch this movie with admiration. One day… The movie begins when a thirsty boy meets a man who is like a fountain.

Byungtae, a high school student whose studies and fights are all poor. In the days of beating, his only wish, which only 'fits well' skills increases, is to become stronger for a peaceful life that does not fit well! He seems to show a portrait of a modern man suffering from the Alcapone complex. From one-on-one to one-on-one, of course! The legendary master Oh Pan-su, who masters all techniques from tossing a coin to developing individual skills, pours out the famous sardines and pinpoints the core. He appears as a mentor and teacher in life that modern people want to meet. But… Panta rhei! How things change. Although fear and inexperience always drive him to the wrong place, Byeong-tae, who exclaimed, 'Have you ever been beaten up?' On the other hand, the life of master Oh Pan-soo, who is secluded in a special room in the reading room, sometimes confuses the audience. He is a brutal fighter full of strong force, and at the same time, he is a unique character that coexists with the childishness of a gangster and the helplessness of a modern man who dreams of escaping to the blue sea of Mexico by reciting Latin music. The movie <The Art of Fighting> is the story of two men. It is a story of friendship between two men, and is a movie with a new character that will give you admirable sympathy and enjoyment close to admiration.

Message from 寸鐵殺人!
A moving and funny.. A masterpiece of national comic action is born!

Spitting, breaking bottlenecks, biting… The secrets of Go Soo and Oh Pan-su (Baek Yoon-sik) are sometimes very clever. Although it is a skill he has learned wisely, Byeong-tae (Jae-hee)'s growing up period is painful at times as he makes mistakes due to lack of practical application ability. Laughing, sometimes getting sick, or admiring Gosu's shot! In this way, the audience can enjoy all the secrets of the 100 minutes that the movie promises. However, after some time has passed, if you can find a heartbreaking aftertaste that remains like sediment, please let the world know. A moving masterpiece that I want to show my friends and my family has been born!

A time to fight, a time to win. What if there was a teacher like a guardian angel who taught me how to win every moment when I was tired of fighting? The movie <The Art of Fighting> starts from the fantasy of modern people driven by competition. It is the story of a boy who has only developed a desire to be strong, meets his teacher and learns the secret of victory. However, the story of a bold and skillful teacher and a timid student chooses a realistic point of view to get tired of. There is no exaggeration or overconsumption of comic fantasy or Hollywood action. Humor, lines of rustic murder, deep action and Jung Joong-dong's wonderful acting are all swirling around! At school, every fight the two men exchange on the road conveys the secret of life to the audience with a clearer message. Until all Koreans achieve a healthy life! At the beginning of the new year in 2006, the movie <The Art of Fighting> reveals a healthy and enjoyable secret for the people.

Illustration – When you have to pull out the flashlight to attack your opponent, don't you fall for it? Don't panic and refer to the famous quotes from the movie <The Art of Fighting>. It contains the secrets to becoming a reference number.

Now it can be revealed! The story of a fighting legend

“I need Cancun, Mexico!”
The passion of the southern country reproduced by 13 foreign bikini girls

Cancun, Mexico, the utopia of O Pansu. Anmyeondo has been reborn as Cancun, overflowing with palm trees and hot sun. Initially, the production team had no plans to show Cancun directly in the film. However, the lead actor, Baek Yoon-sik, strongly insisted that Cancun, Mexico, be reproduced in a splendid way in order to 'complete the film'. Although it is one cut, it was thought to be an important scene that determines the final impression of the movie. In the end, the production team decided to recreate the beach in Cancun, Mexico, and found a photo that they were struggling with. The waves crashing under the hot sun and clean sandy beaches. A wonderful view that anyone can believe even on a hot South Pacific beach. This beach was just Anmyeondo. In the end, the director, actors, and staff unanimously selected Anmyeondo. To reborn Anmyeondo as Cancun, we airlifted palm trees that would exude Mexican flavor and romance, found the best natural light, and captured the best wave height. Over two full days, the outline of the Anmyeondo Cancun project was established. The final mission of the project is to recruit cool Mexican girls, the best of the beach. When 13 international students in bikinis arrived at the beach, Anmyeondo was reborn as the 'perfect' Cancun, Mexico.

Fine bruises vs scaled cuts
Just as a hitter has a style, a wound has a style too!

<The Art of Fighting> is a movie that shows the action of a real 'fight' that takes place in reality, not an artificial action for the sake of the movie, as the title suggests. Therefore, makeup to save reality emerged as an important factor. Uniform devices such as dragon tattoos and tiger tattoos that appear in existing action movies have been avoided. Baek Yoon-sik had to live with a real cut, despite being allergic to special makeup drugs. In Jaehee's case, 98% of the scenes had to have a bruised face. 'Just like the style of the beater, the yoke has a style'! The director’s order to “dye the condition with new and various bruises” is a back door that divides facial bruises into strong, medium, and weak, and sweats to show the essence of a different bruise every time it is filmed.

17 million won skill acquisition fee!
Look! Because it costs a lot of money… !

A six-month long filming campaign that took place around Jeonju, Gunsan, and Janghang. One of the surprising records set by the movie <The Art of Fighting> is 17 million won in treatment cost! The intro is as follows: The actors and staff had no choice but to throw themselves at the request of the martial arts director who shouted “Quickly, quickly and realistically!” As it was a film with practical skills and practical action at the fore, he couldn't give up his efforts to revive reality. Does the action become more beautiful as much as it hurts? In the end, the unparalleled injury treatment cost of 17 million won was proven as a result. The average treatment cost for a large action movie is 2 million won! It is self-evident that the action of jumping like a fresh fish was captured on camera when thinking about not going over it. Here's what all the production team said: The 17 million won worth of pain was the tuition paid by Baek Yoon-sik, Jae-hee, and all the staff, who had to become masters through the movie <The Art of Fighting>!