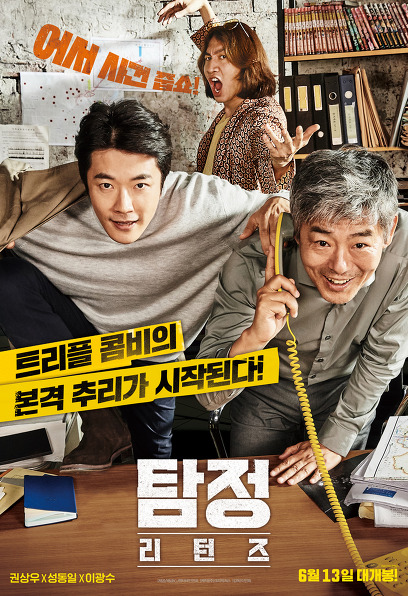 A detective duo that solves the greatest unsolved case ever, 'Kang Dae-man' (Kwon Sang-woo), the owner of a comic book store, and 'Roh Tae-soo' (Sung Dong-il), a legendary detective in the regional investigation team! Finally, he opens Korea's first detective office and takes his first steps as a detective by recruiting a former cyber investigation ace 'Yeochi' (Lee Kwang-soo).
But dreams and reality are different laws! Instead of waiting for the incident, he only flies away, and, under the pressure of living expenses, he eventually goes to the police station and secretly starts to run a business.
The first client who finally arrived after waiting. In addition, the success fee is a whopping 50 million won! The three men confidently accept the case, and the more they dig, the more they start to get confused by suspicious evidence that bites their tails…

"There are no unsolved cases on our way"
In June, the real reasoning of the strongest triple combination begins!

In <Detective: The Beginning> (2015), 'Kang Dae-man' and 'Roh Tae-soo', who conducted an unofficial joint detective operation to solve an unprecedented unsolved murder case, finally return as 'real detectives'. 'Kang Dae-man', an ordinary head of a comic book room and a detective fanatic dreaming of becoming a Korean Sherlock, and 'Roh Tae-soo', who was once called the cannibal shark of the wide area investigation team, but was relegated to a detective because of his similar personality. The two people in this pole and the pole opened a detective office by taking advantage of the unexpected (?) chemistry that was proven through the first part.

<Detective: Returns> is a comic crime mystery drama in which 'Kang Dae-man' (Kwon Sang-woo), the owner of a Sherlock comic book store, and 'Roh Tae-soo' (Sung Dong-il), a legendary detective, open a detective office and recruit a former cyber investigation ace 'Yeochi' (Lee Kwang-soo) to investigate the case. . 'Kang Dae-man', who finally became a detective from the owner of a comic book store, and 'Roh Tae-soo', who refused to be promoted to the second rank of the police and declared a partnership with him, are going to rewrite the history of the strongest detective duo once again following Detective: The Beginning. The two people, who rolled up their arms to solve the long-awaited first case of the detective office, will captivate the audience with their upgraded chemistry and laughter worthy of their return after three years.

In this way, Kwon Sang-woo and Sung Dong-il, who once again worked together as 'Kang Dae-man' and 'Roh Tae-soo', did not spare their affection for Detective: Returns. In particular, Seong Dong-il is raising the expectations of prospective audiences who welcome <Detective: Returns>, which is back, confident that it is "a work with more characters and more events than <Detective: The Beginning>".

The perfect breathing combination, came back with a long, sweet lump?!
Kwon Sang-woo X Sung Dong-il X Lee Kwang-soo Avengers class triple combo equipped!
Actor Lee Kwang-soo joined <Detective: Returns> as 'Yeochi', an ace from the Cyber Investigation Unit, in the combination of the strongest detective duo, Kwon Sang-woo and Sung Dong-il. If Kwon Sang-woo's 'Kang Dae-man' is in charge of the reasoning and Seong Dong-il's 'Roh Tae-soo' is responsible for the investigation, Lee Kwang-soo's 'female Chi' complements the power of the detective office with young blood, absurd silliness, and extraordinary cyber investigation skills. From location tracking to wiretapping, <Detective: Returns> is a powerful triple combo that goes beyond the comic detective combo in the first part, adding to the full-fledged vitality with the special skill of 'Yeochi', who runs an illegal cyber crime center.

The triple duo of <Detective: Returns>, which newly visits the audience like this, showed a great breath both on and off the screen throughout the filming. Kwon Sang-woo boasted of a perfect chemistry from the start, saying, "After the first part, I got a lot of help from acting as I was working with Seong Dong-il and other actors and staff in the same work again." Seong Dong-il also revealed, "Because we are so close, we don't just think about each other's acting, but there was a great synergy between them." It is said that Lee Kwang-soo, who joined here, showed natural breathing with the two actors like the original member on the set. Lee Kwang-soo's performance, "The two seniors gave me a lot of ideas and helped me a lot, so I always learned and had fun filming", raising expectations for <Detective: Returns>. In particular, this fantastic breathing is proved by the ad-libs (?) in every shooting. Kwon Sang-woo said, “The scenario itself was interesting, but we had a lot more fun filming it than the scenario. Every scene, it seems that not a single scene was filmed as it is.” Director Lee Eon-hee, who was in charge of directing, said, "In every scene, all three actors acted about their roles and their relationship to each other. Even from the first filming, actor Lee Kwang-soo was so familiar with actors Sung Dong-il and Kwon Sang-woo that he showed perfect chemistry.”

The movie <Detective: Returns>, which was ‘returned’ thanks to the support of the audience, heralds the start of a full-fledged series by reuniting ‘Kang Dae-man’ (Kwon Sang-woo), the owner of a comic book store who is a fan of Sherlock, and ‘Roh Tae-soo’ (Seong Dong-il), a legendary detective from the metropolitan investigation team. do. In particular, actor Lee Kwang-soo, who has been attracting the attention of the audience, from the recently ended drama [Live] to the weekend evening entertainment [Running Man], attracting the attention of the audience. The chemistry and comedy will be deliciously saved. In addition, this <Detective: Returns> has increased the size of the series by expanding the scale of the events that lead to the center of the play and the scope of reasoning. “Everything is bigger and stronger than in the first part, from the size of the laughter, the events, to the actors. Like the <007> series, as long as my health allows, I want to continue filming <Detective> as long as my health permits.” As conveyed by Kwon Sang-woo's confident feeling, this movie <Detective: Returns> guarantees triple fun that surpasses previous works, and <Detective: The It will completely captivate audiences who were enthusiastic about Beginning> as well as those who will meet for the first time.