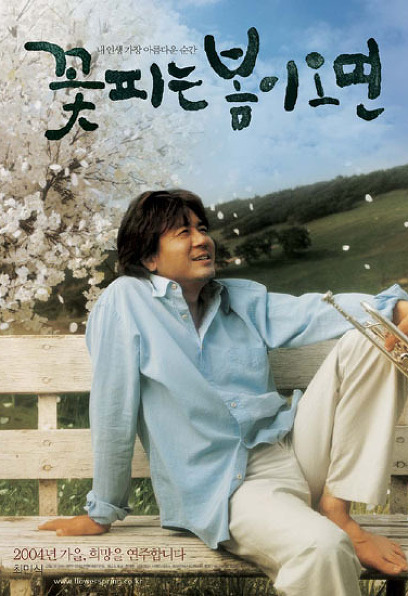 So, the winter was long.

The future I dreamed of being a symphony orchestra player is only dark,
Yeon-hee, who had to let go after she ran into the wall of reality, lingers around and hurts…
For trumpet player Hyeonu, life always seems like winter.

However, the tree was quietly waiting for spring.

Hyeon-woo is appointed as a temporary teacher for the wind band at Dogye Middle School in Gangwon-do, out of desperation. With worn-out instruments, torn sheet music, faded trophies and awards, the wind band is forcibly disbanded if it fails to win the national championship this year, and Hyeonu has to fight a hopeless match with his children. You can't guarantee victory, but you can't give up either. Hyeonu could not turn away from the passion for music that was burgeoning in the hearts of children.

And all of a sudden, spring was so close.

Hyeonu is busy preparing for the competition with the children, but still his heart is numb in the shadow of his old love. With the care of the village pharmacist Su-yeon, who cares for Hyeon-woo's heart, Hyeon-woo feels the warmth of spring blooming like a haze.
Hyeonu, who feels their love, comes to know the people who constantly look at him without getting tired. That the seeds of love are sprouting in the heart. Love is not over yet.
For Hyeonu who had spent the winter like that, spring was approaching, and the flowering spring was approaching.

Choi Min-sik of <Oldboy>, who overwhelms the screen with his intense charisma and received global attention, including 5 million viewers nationwide. He returns as a warm and delicate trumpet player. From <Shiri> in 1999 to <Payran> and <Chwihwaseon> and through to <Oldboy> in 2003, Choi Min-sik took on masculine and thick-lined roles, showing serious performances that no one else would have dared to imitate. With everyone's expectations, the next film he chose is <When Spring Blooms>, which depicts a heartwarming love and human drama. Here, Choi Min-sik takes on a different role as a trumpet player, and shows off his unique image of a strong charisma and a small-town feel coexist. In particular, through this film, he plans to draw a brighter and lighter image by reducing the heaviness felt in his previous works. In the fall of 2004, you can expect a message of emotion, hope, and love from Choi Min-sik, a warm and pleasant man like 'Blossoming Spring'.

A heart-warming topic about the discovery of love and hope, and the healing of wounds.
A moving masterpiece that is essential in this age of truth and humor

<When Spring Comes to Bloom> is a heartwarming and moving story of a trumpet player with scars who finds hope in life while teaching the children of the wind band in a coal mining village. This film, which tells the story of a day when it rains in autumn to spring when flowers begin to bloom, contains the process of healing wounds in the process of changing everything as people, love, and seasons change. Hyeon-woo, the main character, who is still searching for the path of life, Yeon-hee, an old lover who silently looks at Hyun-woo, a single mother who is like an old friend and lover, Kyung-su, a friend who reminds us that the important thing is not the place where we play music, but the fact that we are making music itself, and Dogye. Suyeon and the poor but innocent children of the wind band… The film densely depicts the relationship between Hyeonu and the surrounding people, and honestly captures the way they communicate and reconcile in each other's relationships. And the warm smile and warmth of emotion that permeates in the story will be a comforting touch that gently caresses the withered emotions that have been hurt over the past winter.

Warm video, delicate direction, and beautiful melody to be melted in it
Poetry of music and video set in Dogye, Gangwon-do

<When Spring Comes to Bloom> is the first film directed by Ryu Jang-ha, who worked as an assistant director for director Huh Jin-ho's <Christmas in August> and <Spring Days Goes>. As he has accumulated directing training under director Huh Jin-ho for many years, he chose <When Spring Blooms>, which tells the story of healing and recovery from wounds, as his directorial debut. The assistant who will complete <When Spring Blooms> into a beautiful film together with the director is the cinematographer of <Janghwa, Hongryeon> and music director Seong-woo Jo, who has been in charge of music such as <Affair> and <Christmas in August>. Lee Mo-gae's cinematographer is going to create a sophisticated video dotted with his own style while looking at the Dogye Village in Gangwon-do, including the snowy beach, the snowy beach, and the train station, with a warm and affectionate eye. In addition, music director Cho Seong-woo will imprint music in the right color to match the video, such as the trumpet player Hyun-woo's performance, the children's orchestra of the dog wind band, and the main theme song of Hyun-woo and Yeon-hee, as in the previous work, to imprint an unforgettable melody. The delicate direction of new director Ryu Jang-ha and the harmonious harmony of beautiful images and music that blend seamlessly within it will be the reason why <When Spring Blooms> is the most anticipated film of 2004.