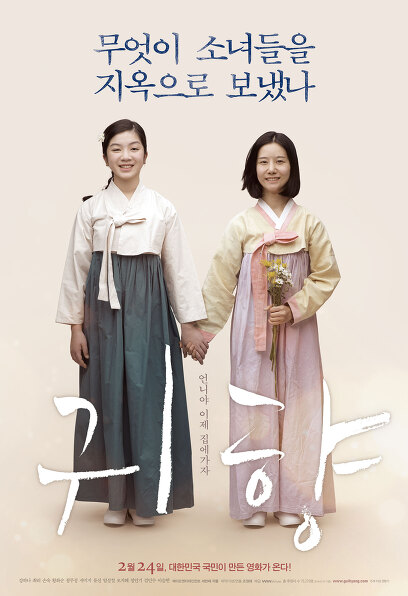 In 1943, innocent 14-year-old Jeong-min (Kang Ha-na), without knowing English, is led by the Japanese army and leaves her family. 'Jeong-min' is taken on a train with Yeong-hee (Seo Mi-ji) and numerous children to an unknown place. In World War II, Jung-min and his children were abandoned in the middle of the cold battlefield…
It was a scene of terrible pain and suffering filled with only the Japanese army that greeted them there.

Our painful story based on the true story of the Japanese military 'comfort women' victims!

“What happened to me at that time was amazing and terrifying, and I have lived with it in my heart for the rest of my life…
Seeing all the people clinging to Japan, forgetting the past, I can't stand it.
Please let me go before I close my eyes.”
– The late Kim Hak-sun (victim of Japanese military ‘comfort women’)

1988. 4. 21 ~ 4. 23
Reported Jung-ok Yoon's 'Exploration to the Spirit University' at the 'Women and Tourism Culture' International Seminar hosted by

1992. 1. 8. Start of 'Wednesday Rally'
The Korean Council for the Countermeasures against Mental Issues (Jeong Dae-hyeop) will start a regular Wednesday demonstration in front of the Japanese Embassy in Jongno-gu, Seoul to solve the Japanese military 'comfort women' issue.

1992. 1. 11. Yoshiaki Yoshimi, a professor at Chuo University in Japan, established a comfort station for the Japanese military and announced the recruitment and control of 'comfort women'
In December 1991, Professor Yoshimi Yoshimi of Chuo University in Japan published documents proving the historical fact that during the Sino-Japanese War and the Pacific War, the Japanese military installed comfort stations in the camp and supervised and controlled the recruitment of “comfort women” by the Japanese military in the library of the Defense Research Institute of the Japan Defense Agency. announced what they found.

2012. 8. 14. Designated as 'World Comfort Women Day'
At the 11th Asian Solidarity Conference to Resolve the Japanese Military 'Comfort Women' Issue, held in Taipei, Taiwan from December 8 to 10, 2012, the Korea Council for Countermeasures against Mental Issues (Jeong Dae-hyeop) celebrates August 14 every year as 'World Comfort Women Day'. was set as August 14 is the day when the late Kim Hak-sun (1924-1997), a comfort women victim, first testified of being victimized by the comfort women.

The victims of the Japanese military's 'comfort women' began to appear in the world like this.

[Excerpt from 'comfort women' in a chronological table of the comfort women e-history hall]
http://www.hermuseum.go.kr

We leave our painful history, which should not be forgotten, as 'evidence'!
Numerous girls were taken away, and only 238 returned. And now, only 46 remain.

<Homecoming> is a feature film based on the most painful history of the Republic of Korea, the testimonies of victims of the Japanese military 'comfort women'.
It has been 25 years since the first testimony of the late Kim Hak-sun on August 14, 1991, and 70 years have passed since liberation. remains as Of the numerous victims, only 238 were registered with the government as victims of the Japanese military's 'comfort women', and now only 46 survivors are alive.
[Based on government registrants on January 5, 2016, source 'Comfort Women' e-History Museum]

At the age of 16, Kang Il-chul was forcibly mobilized as a 'comfort woman' in the Japanese military, and managed to escape from a crisis that almost killed her by the 'incineration order'. Based on this true story, <Homecoming> tells the story of a 14-year-old 'Jung-min' (Kang Hana) and girls who were forcibly placed in a cold foreign land by the Japanese army in 1943. In particular, she thoroughly reproduced the painting “Burning Virgins” drawn by her grandmother in 2001 through art psychotherapy at the “House of Sharing” (a facility supported by surviving Japanese military “comfort women” grandmothers), and the fear felt by a 16-year-old girl at the time. At the same time, they unquestionably testify to the brutality of the Japanese army, which was devoted to war. Director Jo Jung-rae recorded the lives of Japanese military 'comfort women' victims and their sufferings in video, and the 'Holocaust' films that are still talked about by many people are <Schindler's List>(1993), <Life is Beautiful>(1997), <Pianist>. >(2002), it started from the sincerity of wanting to contribute to the role of 'cultural evidence'.

75,270 citizen supporters from around the world completed the film!
A 14-year inspiring project that was completed solely by the people's hands
Director Jo Jung-rae, who wrote/directed/produced the movie <Homecoming>, first met the victims of 'comfort women' in 2002 through 'House of Sharing' (a facility that supports surviving Japanese military 'comfort women') volunteer work. I was shocked to see Grandma Kang Il-chul's painting 'Burning Virgins' and completed the scenario for <Homecoming>, but it failed to see the light for a long time due to multiple refusal of investment over the next several years. Since then, director Jo Jung-rae, who introduced the 'crowdfunding' method, which receives free support from all the people, has conducted news funding and Youcan twice on the official movie website (http://guihyang.com) and the portal site Daum. Crowdfunding is carried out in various ways such as funding and ARS text support, and the film production begins with the production cost. As a result, a total of 75,270 people (as of January 19, 2016) were counted as sponsors of the movie <Homecoming>, and the production cost of 1.2 billion won was collected, which is more than 50% of the net production cost. In addition, not only in Korea, but also all over the world, such as Japan and the United States, the hand of sponsorship continues to attract attention. The list of over 75,000 supporters goes up for about 10 minutes as the ending credits, decorating the finale of the movie <Homecoming>. The pictures drawn by the victims of 'comfort women', which are revealed along with the names of domestic and foreign donors, are inserted into the final scene of the film, adding to its meaning.

Actors Son Sook-Oh Ji-hye-Jung In-ki, and active talent donations by Koreans in Japan!
In the movie <Homecoming>, actors Son Sook, Oh Ji-hye, and Jeong In-ki, who have been acting for more than 50 years, participated by donating their talents, attracting attention. Son Sook-eun, who plays the current role of Young-ok, a young 'Young-hee' (Seo Mi-ji) who escapes and survives after being captured as a 'comfort woman' in the movie and actively participated. Son Sook presents a deep impression and a deep impression by expressing the figure of a victim of the Japanese military 'comfort women', who lives by hiding the wounds that do not heal. Actors Oh Ji-hye and Jeong In-ki, as the mother and father of 'Jung-min' (Hana Kang) in the play, melt the sorrow of having to send a young daughter dragged in front of their eyes to the screen, conveying a deep echo to the viewers. In addition, the staff from each field also participated by donating their talents to enhance the perfection of the film. All of them participated in the meaningful production of <Homecoming>, expressing a sense of mission and strong will for the Japanese military 'comfort women' issue with one mind.

From all over Korea to the eastern western continent of the United States! Tears and Emotions Sponsorship Preview held!
The crowdfunding of the movie <Homecoming>, which was an unprecedented success with the support of a total of 75,270 people, raised about 1.2 billion won, and ended with the 'Supporter Preview'. On December 7 of last year, the movie <Homecoming>, which had its first preview at the 'House of Sharing' in search of the victims of 'comfort women', the starting point of the movie, has since held a 'sponsor preview' for civic supporters who participated in crowdfunding. did. Starting with Geochang, Gyeongsangnam-do on December 10, last year, the '1st Sponsor Premiere' was successfully completed in Gwangju, Daegu, Daejeon, Wonju, Busan, Jeju, and Seoul. From January 22 of this year, LA, Arizona, New York, The University of Connecticut, Brown University, Washington, etc. held the 'American Sponsor Premiere' covering the West and East, and expressed deep gratitude to the sponsors who made the film possible.
The domestic and foreign supporters of <Homecoming>, who watched the movie first, shared a deep hug with director Jo Jung-rae and actors right after the screening, and responded with a greeting of emotion from the production stage to the release. As such, the movie <Homecoming> shared with the director's earnest desire to bring those who died in an unfamiliar foreign land to their hometown, even if they were souls, by giving special emotions to the audience.