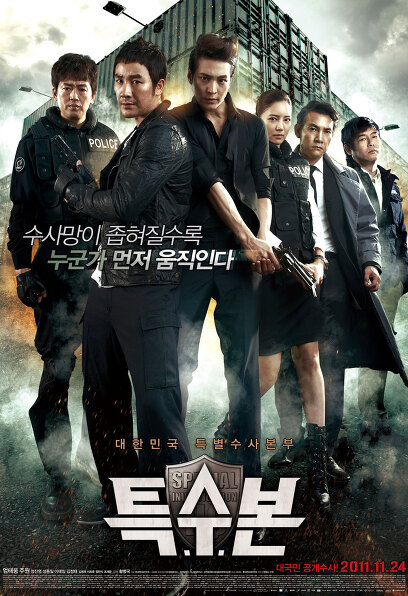 Seong-beom (Uhm Tae-woong), a detective with an animal sense, never misses a door case.
While working undercover, he receives a murder case of a brutally murdered fellow police officer.
Seongbum and the National Police Agency, instinctively sensing that this was not a simple case, formed a special investigation headquarters,
Horyong (Joo Won), a crime analyst from the FBI, is assigned as the partner of Sung Bum.

As the investigation network narrows, the suspect always gets out of the scene one step ahead.
And even the unilateral order of the police chief to kill the suspect immediately after finding it.
The more we dig into the case, the more strange aura is detected inside…

will you reveal will you cover
The more you dig, the more dangerous it becomes.

The police murder case that shook Korea!
Unbelievable behind the scenes in 2011!
A special investigation headquarters formed after a fellow police officer was murdered. If you catch the clue, the suspect disappears, and no one can be trusted anymore. As the investigation network narrows, someone moves one step earlier, and the more the case is pursued, the bigger the case, and the fellow police officers who were next to them are dying one by one. A strange tension is formed where they can't trust each other.
<Special Edition> is a full-fledged action investigation drama that meets after a long time, constantly running towards the chase and chase investigation process and the existence of an unknown behind-the-scenes force. 200g of drugs left at the crime scene, a burnt police car, a sophisticated suspect who always removes evidence ahead of the investigation headquarters, and the investigation process that becomes more and more dangerous the more you dig, and the unexpected behind the scenes revealed as you get closer to the case, the investigative instinct of the viewers. will stimulate In addition, the hot performances of the lead actors who do not spare themselves, the chase running around high-rise buildings without rest, the fierce battle in a narrow market alley, the action scenes mobilized even with heavy equipment, and the shooting scene in an abandoned factory, the highlight of the movie, are vivid and vivid that you have never seen before. It will be completed with a unique action scene with a sense of presence and Korean sentiment, which will double the fun of watching <Special Edition>.

Uhm Tae-woong, now 'Um Action'!
Take off the image of the nation's handsome man and put on the clothes of a terrible detective!
Uhm Tae-woong, who took over 2011 with the highest stock price, threw off the image of a national innocent and returned as an action detective with a terrible character. Unlike the existing reliable or pure image, Uhm Tae-woong, who transformed into a homicide detective with a rough but animalistic sense, boasts a high synchro rate that is considered a 'sexual offender' in itself. He showed a charismatic performance in the TV drama [Resurrection], which already created 'Um Force', and through this work, he shows a unique 'detective force' with a different appearance, such as short haircut and wearing a leather jumper.
Uhm Tae-woong, who witnessed the first murder case in <Special Edition>, intuitions that it is not a simple murder case, and conducts the investigation as a key member of <Special Edition>, is a realistic filming reminiscent of a real crime scene. He was praised by the staff for his responsibility and sincerity as a lead actor on set. He said, “It was the most masculine and wildest role I’ve ever played,” and he portrayed Uhm Tae-woong as an 'action actor' with intense acting and intense action scenes without a double that he showed while entrusting himself to a single wire rope on a dangerous rooftop railing. prove your presence

The fireworks show of the best dream team in Chungmuro!
Uhm Tae-woong + Jung Jin-young + Sung Dong-il + Kim Jeong-tae VS Joo-won + Lee Tae-im
The best acting dream team in Chungmuro has united into the best investigative dream team!
From the serious acting of the drama [Resurrection], [Demon King] and [Queen Seondeok] to the reliable coach of the movie <Woosaengsoon>, the romantic and handsome charm of <Cyrano; Romance Manipulator>, the national entertainment show [1 Night 2 Days] as CF Blue Chip Uhm Tae-woong came to mind. Here, Jung Jin-young of <The King of Kings> captivated 10 million viewers with his profound charisma, Sung Dong-il, the best supporting actor in Chungmuro, and Kim Jung-tae, the 'trend', all of Chungmuro's leading actors gathered together for <Special Edition>. In addition, Joo Won, who took on the role of 'Ko Ma Jun' in [King of Baking Kim Tak Goo], which was loved as a national drama by breaking 50% of the audience rating, captivated the CRT with a fresh mask and acting skills that are not like a rookie, only through the CF [Ocean World]. Lee Tae-im, who is attracting attention as a rising hot-body icon, joined the young blood of <Special Edition>, creating a fantastic harmony of old and new.
The Republic of Korea Special Investigation Headquarters <Special Edition>, composed of all the brightest stars of Chungmuro, is expected to provide another attraction with actors with different personalities and attractions.

Uhm Tae-woong's action actor instinct!
Wire action scenes, breathtaking chases, and rough fighting scenes are OK!
Uhm Tae-woong showed 100% of the hidden instincts of an action actor through the movie <Special Edition>. He, who has recently appealed to the nation as an innocent boy through [1 Night 2 Days], has transformed 180 degrees into a charismatic action actor that is different from usual when he enters the director's cue sign in this work <Special Edition>. His immersion in acting and his uncompromising enthusiasm were enough to make every scene in <Special Edition> a masterpiece.
Uhm Tae-woong, who performed exceptionally many action scenes thanks to the character of a fiercely passionate detective who never misses the door case. He actually leaned on a wire to express the appearance of standing precariously on the rooftop of a high-rise police station with a haggard appearance, and he filmed with a calm and determined appearance, receiving applause from the staff and many people at the scene. In addition, Uhm Tae-woong is perfect without any injuries, such as the movie's highlight of the movie, the frantic chase and chase, the movie's tense scene of market merchants protesting, the fighting scene in an abandoned factory that makes viewers sweat, and the explosion scene. I digested it well and showed my side as an action actor. Through <Special Edition>, the audience will be able to discover a new side of Uhm Tae-woong, who is full of rough and masculine beauty.

'Fire Investigation' Uhm Tae-woong VS 'Cool Analysis' Joo Won's investigation showdown!
However, the strongest combination in the field!
Uhm Tae-woong, who plays a detective with an animalistic sense, and Joo-won, who plays a crime analyst with a cool rationality, show off opposing investigative styles through the movie <Special Edition> and engage in a breathtaking investigation confrontation.
Seong-bum (Uhm Tae-woong), who develops an 'action investigation' by demonstrating his instinctive investigative sense, is gritty in what he does in <Special Edition>, which is composed to investigate an unprecedented police serial murder case. Horyong (Joo Won), who conducts 'analysis investigations' based on his genius brain and meticulous analytical power, is a character who runs into each other. Ahn Sung-ki and Park Joong-hoon of <Two Cops>, Park Joong-hoon-Jang Dong-gun of <There is nothing to see>, and Song Kang-ho and Kim Sang-kyung of <Memories of Murder>, the 'strongest investigative duo that showed off a fantastic partnership in the movie where detectives appeared as the main characters ', Uhm Tae-woong and Joo-won, who are the rivals with opposite personalities in the play, actually boast a close friendship and loyalty between their close brothers and sisters. Uhm Tae-woong said, "Joo-won was originally a close younger brother, and as close as we were, it was doubly fun to work together." Joo-won also said, "It's an honor to act with him because he's a great actor, even though he's 100 points human." He said he was an old fan. In 2011, Uhm Tae-woong and Joo-won, who will become the most powerful 'Investigation Combi' in 2011, will give another fun to watch <Special Edition>.

Detective looks that don't need styling, realistic detective acting!
Until the actual police are dispatched!
As the movie <Special Edition> features members of the Special Investigation Headquarters as the main characters to uncover the reality of the crime, all the main supporting actors appear as detective characters. In particular, Uhm Tae-woong and Sung Dong-il perfectly portrayed the role with realistic acting and an appearance that suits the character of a tough and honest detective. performed In addition, Kim Jung-tae, who appears as a former detective, is a representative image of a corrupt police officer, and Lee Tae-im, a Hong Il-point of the Special Investigation Headquarters, hides her sexy body with a baggy shirt and crude pants, expressing the image of a loose and loyal female detective.
Except for the main characters, supporting actors and minor actors who played detective roles appeared frequently, but in the early days of filming at the Daejeon Jungbu Police Station, funny situations occurred where the staff confuse the actual detectives with the minor actors. Also, during the filming of 'Seong-beom' (Uhm Tae-woong) and 'Ho-ryong' (Joo-won), who are investigating the suspect, there was even a rumor that a police officer who thought it suspicious was dispatched. Thanks to the realistic acting and shooting of the actors reminiscent of a real situation, <Special Edition> will delight the audience with a more vivid sense of presence.

The investigation site that traveled all over the country!
Behind the scenes of the location received by <Special Edition>!
From Seoul, Daejeon, Incheon, Ilsan, and Yecheon, the filming of <Special Edition> was conducted in various parts of the country to capture more vivid investigations. In addition to set filming, the production team tours all over Korea to find locations suitable for action investigations such as Daejeon Central Police Station, Garibong Market in Seoul, Mansu Market in Incheon, Public Security Center in Ilsan, and Old Tobacco Material Warehouse in Yecheon, Gyeongbuk. spare no effort The production process was as intense as the meticulous pre-production process. The two-day protest scene in the redevelopment area of Gajeong-dong, Incheon was a scene full of scale in which the largest number of people and vehicles were mobilized throughout the filming of <Special Edition>. All the many people who were mobilized had to work together and work together. It was not an easy situation from selecting a venue to the heat wave that came after the rainy season, but the scenes created by the teamwork of the <Special Edition> production team and actors with the strongest teamwork will be born as masterpieces unique to <Special Edition> and deliver catharsis to the audience.