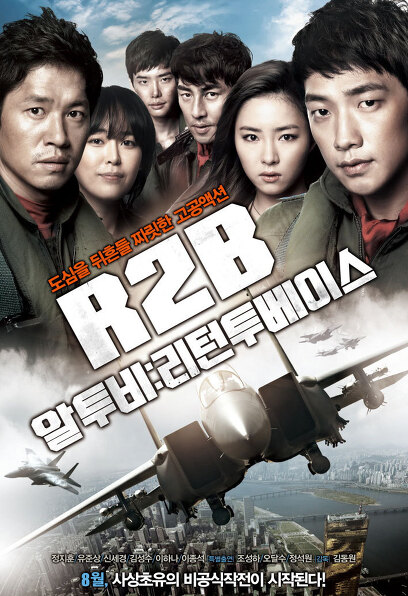 Tae-hoon (Jung Ji-hoon), a pilot of the Air Force special flight team 'Black Eagles', is expelled from the team while performing 'Zero Note', a prohibited flying technique at an air show. Tae-hoon, transferred to the 21st Fighter Wing with Dae-seo (Kim Seong-su) as the squadron commander, meets his classmate Yu-jin (Lee Ha-na) and his junior Seok-hyeon (Lee Jong-seok), but gradually gets used to it, but runs into Chul-hee (Yoo Jun-sang), who is called the 'Top Gun' in the wing. Tae-hoon, who has experienced defeat for the first time in his life in the F15K flight showdown for the two of them, is teaming up with Se-yeong (Shin Se-kyung), the best ace mechanic in the maintenance battalion, to restore his pride in the aerial shooting competition.

One day, when the atmosphere of peace between the two Koreas was ripening, a bandit disguised as a defector descended to Seoul and engaged in an unexpected encounter with the 21st Fighter Wing, which was in patrol. Peace is kept at a great price, but this was only the beginning of a huge conspiracy that threatened the entire Korean Peninsula. As a result, the 21st Fighter Wing begins the final unofficial operation 'Return to Base'…

The allotted time is only 7 minutes, you must stop!

What if an unknown fighter appears over downtown Seoul?!
Add realism with realistic materials and settings!

“What if a tsunami hits Haeundae?” (<Haeundae>), “What if a man-eating mutant monster appears in the Han River?” (<Monster>). Movies that started with a small curiosity like this and perfectly realized what could happen in reality have been loved a lot. <R2B: Return to Base>, which is based on the unofficial operation of the 21st Fighter Wing to protect the skies of the Republic of Korea, has heated up online even before its release by introducing another hypothesis with a high possibility of reality following the previous movies. The Republic of Korea is the only divided country in the world and one of the few countries without a ceasefire. <R2B: Return to Base> adds cinematic imagination to the reality of our country, and started with the setting that "An unknown fighter appeared in the sky near the ceasefire line, and Seoul, the heart of Korea, is in danger of being attacked." The film depicts a fiction that is likely to occur in a situation where the situation on the Korean Peninsula has been unstable in recent years, giving the audience a consensus and emotional shock. In particular, the chase scene in which two fighter jets are chased and pursued in places where audiences spend their daily lives, such as the landmark 63 Building in Seoul and the Han River, Wonhyo Bridge, and Teheran-ro, blurs the distinction between film and reality, adding shocking reality to the audience. . <R2B: Return to Base> is expected to provide a different kind of pleasure by adding a possible situation and setting to the background of the divided reality, multiplying the audience's sympathy and tension.

Ready to sortie!
Those who stake everything in the sky are coming!
F-15K live-action shooting, high-altitude action drama completed with a dizzying chase scene!
The high-altitude action drama <R2B: Return to Base>, set in 2012's 'Aerial of the City of Seoul', foreshadows a full-fledged scramble. <R2B: Return to Base> is a high-altitude action drama depicting the unofficial operation of pilots belonging to the 21st Fighter Wing who risked their lives in the sky to save the Korean Peninsula in crisis. From the pre-production stage, new challenges and efforts that have not been attempted in Korean films are added, and it is expected that a movie with fun and emotion will be born in the sky of Korea. The dizzying chase scene between a fighter that appeared in the sky over Seoul and a fighter of the Republic of Korea Air Force chasing it is a special attraction that can only be tasted in <R2B: Return to Base>. This scene, which can be said to be the highlight of the movie, is supported by the Republic of Korea Air Force, and the actual movements of the F-15K and TA-50 are filmed, and the CG is minimized to provide a thrilling action pleasure to the viewer with a more realistic battle scene.

The team members' passion and camaraderie in reality, such as a sudden disaster, interlocks with the overall narrative of the film, making the drama more solid and solid, and is expected to catch the audience's attention with the Korean version of <Top Gun>. <R2B: Return to Base>, which is armed with fun and emotion through the drama of the 21st Fighter Wings, as well as the spectacular visual effects of the overwhelming scale, is set in 2012, when Hollywood and Korean films are competing fiercely than ever before. It will be a serious battle in the summer screen market.

Enjoy the speed of Mach from 13,000 km above sea level!
Exciting high-altitude action with 100% pleasure satisfaction!
What you should pay attention to in <R2B: Return to Base> is the exhilarating high-altitude action that shakes the city sky! The high-altitude action that takes place at an altitude of 13,000 km, which has not been seen in any Korean movie so far, provides a refreshing feeling to the audience who are tired from the sweltering heat along with the exhilarating pleasure of action that can be felt from the speed of Mach. In Hollywood movies such as <Top Gun>, works with high-altitude action often appeared, but in fact, it was almost non-existent in Korea. That is because it was difficult to increase the difficulty and completeness of the shooting. <R2B: Return to Base>, which started with the will of the production team to make a proper high-altitude action movie in Korea, was born as a result of numerous meetings and discussions from the pre-production stage. The path chosen by the production team to deliver a thrilling flight scene unfolding above the Seoul sky, a sense of speed suitable for high-altitude action, and a wide stage of the sky in a sense of scale, is to minimize CG. The aerial photography, supported by the Republic of Korea Air Force, was conducted at an altitude of 7.5 km and 13,000 km. In order to shoot the F-15K and TA-50, which are several times more difficult than on the ground, to shoot the F-15K and TA-50 moving at literally Mach speed, Hollywood staffs who were in charge of aerial photography of <Inception> and <The Dark Knight> participated and boarded Wolf Air. The movement of the Air Force fighter was captured more vividly. The high-altitude action scene shot in this way was reborn as a more complete scene through post-production for about 10 months. The full-fledged high-altitude action drama <R2B: Return to Base>, which will leave a new milestone in Korean film history, will provide an exhilarating feeling of action with 100% satisfaction with the speed of Mach as well as the coolness of the blue sky full of screens.

Jung Ji-hoon, Yoo Jun-sang, Shin Se-kyung, Kim Seong-soo, Lee Ha-na, Lee Jong-seok, Jung Kyung-ho
With the perfect combination of star power and proven acting skills,
Responsible for a solid drama!
The 21st Fighter Wing, which has built their own characters with unique personalities across screens and CRTs, staked everything in the sky in the high-altitude action drama <R2B: Return to Base> by Jung Ji-hoon, Yoo Jun-sang, Shin Se-kyung, Kim Seong-su, Lee Ha-na, Lee Jong-seok, and Jung Kyung-ho. Completely transformed into crew members. In addition to flight training before filming, they are responsible for a solid story with solid teamwork than any other actors who have worked together for six months of dramatic filming. In order to be reborn as true fighter pilots, the cast members are immersed in the character, claiming to be a high-level training from physical training before filming to pre-flight training, low-pressure training, emergency escape training, and gravity tests that are difficult for even military academy students to do. showed enthusiasm. For the actors, all of this training process was not just a one-time experience, but a process of understanding and communicating with actual fighter pilots. Thanks to this, the perfect acting ensemble and synergy formed during the hard training process adds depth to the characters of the actors who are perfectly divided into the fighter pilots and the maintenance team, rescue team, and crew that make them fly, and delivers a vivid impression to the audience. The attractive transformations and performances of each actor, who will be united with the characters with strong personality in the movie to enhance the completeness of the work, give the depth and weight of the movie, and expect the birth of the hottest movie in 2012.