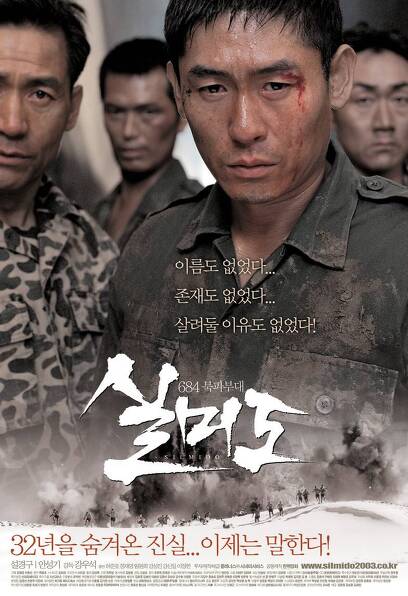 losers kill
Destroy yourself when arrested

Hell training to challenge human limits… The birth of 'Silmido Unit', a weapon for killing 31 people

“It’s your job to infiltrate Joo Seok Palace and get Kim Il-sung’s throat!”

Kang In-chan (Sol Kyung-gu), who was not treated as a human being anywhere in society because of his father who went to North Korea, was imprisoned for attempted murder while wandering alleys with a dark past. A soldier approaches him, throws an absurd suggestion, 'Can you hold a knife for the country?' In-chan was led to the execution site by someone, but he arrived at a remote pier in Incheon, where, besides In-chan, there were a lot of dark men including Sang-pil (Jung Jae-young), Chan-seok (Kang Seong-jin), Won-hee (Im Won-hee) and Geun-jae (Kang Shin-il). In 1968, 31 people who were forcibly taken out by an agency in Silmido Island, a remote island in the western part of Korea, gather.

The 31 trainees who had their hair cut unknowingly and became soldiers, the soldier of the spirit of courtesy that appeared to them was Lieutenant Kim Jae-hyeon (Ahn Seong-gi), who was puzzled and told them, “Your duty is to infiltrate Joo Seok-gung and take the head of Kim Il-sung.” Starting with one word, the harsh hell training for 31 trainees begins under the guidance of the cool-headed Joong-sa Jo (played by Heo Jun-ho).

There are no humans in Silmido under the slogan “Kill the stragglers, self-destruct if caught!”, and the trainees who have no rank or affiliation, called the '684 Zhuanggung Bombing Unit', and their guards in charge of monitoring and training them… There is only one clear purpose…

On August 23, 1971, in front of Yuhan Yanghaeng, Daebang-dong, soldiers who appeared on an Incheon city bus had a gunfight with the military-police suppression force and committed suicide. At first, the authorities called it an 'armed public conspiracy', but the next day it was corrected to 'a riot by special military criminals'. However, they were the 'North Korean special forces' created by the government on Silmido Island. Why did the government repeatedly deny them? Why did they risk their lives to escape and mass suicide? The national aspiration for finding the truth is realized on the screen in 2003!

The 'Silmido Incident' was the most tragic event in our modern history, yet it had to be erased from history. The hidden story that was painful to know and could not have imagined saying, 'I hope…' is finally revealed. The 'Silmido Project', based on the most dramatic 'Silmido Unit 684' in Korean history, has been like a 'hot potato in the film industry' for nearly 10 years. The movie <Silmido> follows the truth that has been waiting for 32 years, the secret true story of 3 years of the 31 trainees of Unit 684, who were witnesses and victims. In December 2003, he finally encounters the dramatic fate of 31 people who can't be denied.

After showing off his best acting skills in <Peppermint Candy> and <Oasis> with director Kang Woo-seok of Midas, a Korean film box office hit, Kyung-gu Seol worked together once again after <Public Enemy>. The solid breathing in <Public Enemy>, which they have already shown, raises expectations for the movie <Silmido>. In addition, national actors Ahn Sung-ki, Heo Jun-ho, Jeong Jae-young, Kang Shin-il, Kang Sung-jin, and Im Won-hee, who can only make 5 or 6 Korean films, are all in the lead actors, demonstrating the extraordinary power of the elite Korean film squad.

What is the 'Silmido Incident'?

On August 23, 1971, the so-called 'Silmi Island Riot Incident', the media focused their efforts on covering the incident that would bring about the biggest uproar since the founding of the country if they were really 'North Korean units'. couldn't Within three days of the incident, government and military officials, including Defense Minister Jeong Rae-hyeok and Air Force Chief of Staff Kim Doo-man, took off their clothes one after another, and the four surviving trainees were immediately executed. As such, the 'Silmido Incident' seemed to disappear from history forever, but after the 'People's Government', the existence of spy units under the ROK Army such as HID and AIU and the issue of human rights became a social issue, and the re-evaluation of the 'Silmido Incident' is on the rise. start to hear

The official name of the unit was the 209th Detachment Squadron of the 2325th Squadron belonging to the 7069th Air Force, which was called the 'Oryu-dong Intelligence Unit'. It was established on January 21, 1968 as a retaliatory measure planned by the Park Chung-hee administration and the Central Intelligence Agency, surprised by the '1.21 Kim Shin-jo Incident' that 31 armed comrades infiltrated the Blue House to 'pick up the leaves of Park Chung-hee'. It was a condition of being guaranteed a new life by the government, such as recruiting the lower classes of society, including death row inmates, inmates, and general criminals, and canceling all punishments and expunging criminal records if the operation was successful. This unit, which was created in April 1968 and called the '684 unit', consisted of 31 men the same as the Kim Shin-jo unit, but during training, 7 people died due to accidents, escapes, and executions, and in the end, 24 people survived to the end. Their only goal was to 'take the neck of Kim Il-sung' by infiltrating the North Koreans.

There was no training in Silmido. Behind the trainees running and running, there were always guards loaded with live ammunition. They were thoroughly trained in the People's Army style, such as the People's Army chant and the People's Army ceremonial training. The trainees, who were initially mischievous, became human weapons capable of escaping to the North in just three months through actual shooting with their heels, group beatings, and hell training that challenged the limits of human beings. Four months after the formation of the unit, the first actual command was issued, and an attempt was made to infiltrate the North by sea route, but it was canceled due to the upper-level blockade. After three years and four months, their long-awaited waiting for only the 'Day of Departure' begins.

Meanwhile, the situation on land outside the island starts to turn completely different from when the Silmido unit was first established. With the international détente, an atmosphere of inter-Korean reconciliation began to be created, and rapid changes were already beginning, such as the replacement of the chief of the central government. Silmi Island Unit 684, which has become a 'relic of the old era' and a 'ghost unit', is eventually ordered by the superior to remove them. However, to the Silmido trainees who were tamed as human weapons, the regular soldiers in charge were helpless, and the trainees who received Silmido in just ten minutes landed in Incheon, seized a bus from the outskirts of Songdo, and headed to Seoul. While the entire army's emergency warning order was issued, they ended up fighting with the suppression force, choosing the end of self-destruction in front of Yuhan Corporation in Daebang-dong. The government closed the case faster than ever.

Why did you go to the Blue House together? Why did you self-destruct? Was there no way to live?

At that time, the bus seized by the trainees was loaded with civilian passengers, who had given strange testimonies. The fact that the trainees asked to go to the Blue House, that they were trying to protect themselves as hostages, and that the trainees didn't shoot first in the bus. Conversely, this means that the suppression forces fired fire despite the presence of hostages. Why did they go to the Blue House together? Why did everyone choose the end of self-destruction together? Wouldn't it have been possible to survive if the human weapons capable of reaching the North had dispersed and acted individually? Did they have something 'the story they wanted to tell with their life'? The truth that has been hidden for 32 years… Now that we can tell, but they are disappearing.

6:15: Communication between Silmido and Air Force units is cut off. Only 6 of the 24 key soldiers survived. Commander of Education Kim Soon-eung and 12 others were killed and 6 others were drowned. A total of 18 soldiers were sacrificed.

13:30 Police officer at Sosa three-way intersection in Incheon is shot.

Last battle at 14:25, in front of Yuhan Corporation in Daebang-dong, Seoul
"Certainly, I didn't shoot first from the inside. I shot first from the outside" – Testimony from a bus passenger at the time of the incident

Kang Woo-seok VS Seol Kyung-gu, the strongest duo and top-notch production crew in Korea
Reborn as another elite special force under the name of <Silmido>!

Korea's top box office director Kang Woo-seok and Korea's best actor Seol Kyung-gu worked together once again after <Public Enemy>. The meeting between director Kang Woo-seok, the midas of the Korean movie box office, and Seol Kyung-gu, who is recognized by others, with his wide acting skills, and here, cinematographer Seong-bok Kim, who possesses the best skills in Korea such as <Access> <Joint Security Area JSA> <Public Enemy>, <Two Cops> From > to <Public Enemy>, the best talents recognized by others, such as Shin Hak-seong, lighting director, who has been working with director Kang Woo-seok, joined together to become another 'most elite special force' comparable to the Silmido unit and completed the top secret project in perfect harmony. .

<Silmido>, the most talked-about work of 2003, had to go to the longest-distance location for 7 months, from Gangwon-do-Busan-Incheon-Silmido-Malta-New Zealand-Jeju-do-Buan-Paju. It was a huge task that cost 700 million won and 500 million won, respectively, for the 'Mediterranean Malta MFS Studio' location for the best underwater infiltration scene and the 'New Zealand' location for the winter training scene. In addition, the set of <Silmido>, including the Busan court set, the Daebang-dong set in Buan, Jeollabuk-do, and the Silmido training ground set, was thoroughly tested and a large-scale production cost of about 3 billion won was concentrated. This scale was indispensable due to the firm will of the production team to perfectly reproduce that time when it was buried in history with 31 warriors.

The world's largest CH-47D Sinook helicopter was mobilized, and 2 specially made buses for <Speed> were produced

The filming equipment transported to Silmido by ship had to be moved to the top of the mountain in Silmido by helicopter. At this time, the world's largest CH-47D Sinook helicopter, aka 'Lighttail', was used. This laborious task of moving two cranes and a generator to the top of the mountain in the middle of Silmido Island at a huge cost of '70 million won for one transport only' is the first in the history of domestic film production. And the special bus used in the movie <Speed> was produced and mobilized to film the last battle in Daebang-dong. It cost 200 million won each to produce two identical special buses that were used in the movie <Speed> to enable high-level filming of the spectacular bus race scene and the inside of the bus while running.

In addition to the main actors Seol Kyung-gu and Ahn Sung-ki, all the actors and staff all agree. There are 31 main characters in <Silmido>… Most of them are new actors who play the role of trainees in the play. A total of 5,000 applicants flocked to the initial recruitment audition alone, and 31 trainees were selected from among them. These 31 trainees, including the main character Seol Kyung-gu, are specially designed to capture the movements and glances of the actual 'Silmido troops' who are able to infiltrate the North without even realizing it, perform their missions, and survive, regardless of the main or supporting role. have been trained In this way, <Silmido>, which once again set the record for the most lead roles in Korean film history, was cast in a fixed cast alone, and about 70 actors were cast, and about 1,000 extras were mobilized to reproduce the appearance of each real person who existed in Silmido at that time. could do it