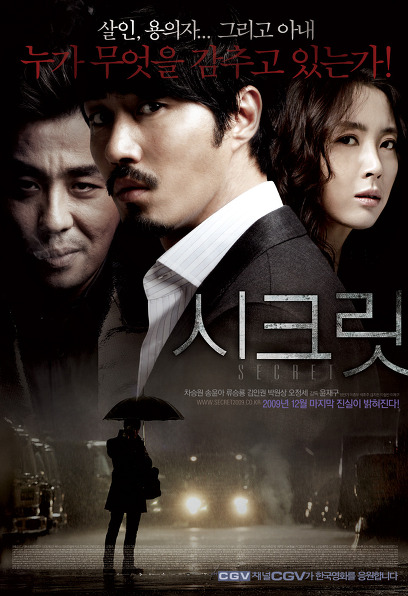 The detective's wife, the traces of the murder she left behind
All the evidence points to her!
An incident occurs where the second-in-command of a notorious organization is brutally murdered after being stabbed several times. Seong-yeol (Cha Seung-won), who was dispatched to the scene, finds the lipstick marks on the glass that the criminal left behind, as well as a button and an earring that have fallen into shock. He realized that the traces of the criminal were his wife (Song Yoon-ah)'s lip color, the buttons on her clothes, and her earrings while she was preparing to go out this morning. Seongyeol instinctively destroys all evidence, avoiding the eyes of his rival and partner, Detective Choi. He threatens and steals even crucial witnesses who testify that he saw the woman who came on the day of the incident.

“Shall we make a bet? Who catches it fast!”
There is tension in the powerful squad, where the identity of the dead victim has been confirmed. This is because it turns out that the victim's older brother is Jackal (Ryu Seung-ryong), the vicious boss of the Chilseonghoe. Jackal laughs at the police and declares that he will go on a hunt for the criminal himself, and as the investigation progresses, the possibility of his wife's murder increases. However, on the day of the incident, the wife did not open her mouth about the alibi, and Seongyeol finally arrested another suspect, Seok-jun (Kim In-kwon), a former criminal.

What is the truth? Who is hiding what!
Seongyeol's urgent move to cover up the traces of his wife's murder draws the attention of Detective Choi, who is desperate to catch his weakness. Jackal, knowing that Seok-jun is not the culprit, also begins to suspect Seong-yeol. Under pressure, Seongyeol receives a phone call from Seongyeol, who is running all over the place to escape his wife abroad. A questionable voice proposing to make a deal because he has decisive evidence. The voice on the phone sends the police and Jackal the CCTV tape of the incident on which the criminal's face is erased at the same time, and threatens Seongyeol by saying that if he doesn't follow his instructions, he will reveal the face in the CCTV…

17 INT. Officetels. night.
'pop! pop!' The camera flash fires. Detective 3 is taking pictures. It's a murder scene. a man is dead A dead man's face is revealed through the legs of passers-by. This is Jo Dong-cheol. Detective Choi says hello to Detective 2 passing by and is talking on the phone while standing around.

Detective Choi
Anyway, the forensics class is always late, every day!!
… Long clogged, what if the road is blocked when the forensic team car is open?
So come quickly!

Detective Choi, who hung up the phone and went to Seongyeol, suddenly looked carefully at the glass on the table. There are faint traces of purple lipstick on the glass.

Detective Choi
It's purple. Do you have this lipstick?

Detective Choi (Crazy) I know everything.

Seongyeol
My wife put it on today and went out.

Detective Choi
okay? So let's start with your wife,
There was an eyewitness saying that he saw a young woman.

Seongyeol, who was walking towards the sofa, stepped on something. Sungyeol, if you look at the floor, it's a button… . Stylishly shaped buttons. Sungyeol tilts his head, and if you look closely, it's his wife Jiyeon's black velvet button. Seongyeol leans down and looks under the sofa, and Seongyeol's gaze sees the underside of the sofa. Something is off under the legs of the sofa. a pair of earrings Seongyeol reaches out and picks up the earring. A pair of lost earrings from Seong-yeol, who carefully examines the earrings, and Ji-yeon, his wife. 'Thump' Something strikes Sungyeol's chest violently.

Compete with an exciting setting and a solid scenario!
<Seven Days> The second thriller <Secret> directed by Yoon Jae-gu
Director Yoon Jae-goo, the screenwriter of <Seven Days>, who is still receiving enthusiastic support from the audience for his solid story even after two years of release, is returning with the second thriller <Secret>. After the script of <Seven Days>, which was exported to the U.S. at the time, the home of the thriller, at the highest price, the screenplay of <Secret>, which director Yoon Jae-goo worked hard to complete, is also a thriller with director Yoon Jae-goo's unique elaborate plot and unexpected twist. Starting from the unique and interesting setting of 'a detective discovers the traces of his wife at the scene of a murder,' the script of <Secret> has already been produced just because it is the work of director Yoon Jae-gu, who has built up an unrivaled reputation as a 'storyteller'. From the stage to the 'thing' in Chungmuro came through. <Secret>, in which he not only creates a story in his head, but directly grabbed the megaphone, will be an opportunity to check out the true value of Yoon Jae-gu, a born storyteller.

The 'Thriller Dream Team' in the Korean film industry has united!
<Seven Days> Screenplay & Directed by Yoon Jae-goo
<The Chaser> Cinematography Lee Seong-jae
<Reconstruction of Crime> <Tazza> <Seven Days> Edited by Shin Min-kyung
The production team of <Secret>, which was led by director Yoon Jae-goo of <Seven Days> screenplay, boasts a splendid career and skills to the extent that the title 'Thriller Dream Team' does not disappoint. Cinematographer Lee Seong-je of <The Chaser> took on the role of giving visual dynamism to director Yoon Jae-goo's fast-paced scenario. Director Lee Seong-jae's camera, who worked on <Secret> after more thorough preparation than ever before, moved away from the rough and sweaty <The Chaser> style and elaborated a complicated story with sophisticated and dynamic camerawork. The excellent sense of editor Min-kyung Shin, who decides the timing of just one frame and just a few seconds, is responsible for the tension in <Secret>. Already recognized in crime and thriller genres such as <Tazza>, <Reconstruction of Crime> and <Seven Days>, her excellent editorial sensibilities allow even a single moment of error in the story in which each character is intricately entangled around a single case. does not The outstanding performance of the 'Thriller Dream Team' with the best skills is the reason why you should check <Secret> on the theater screen at the end of this year.

The daring challenge of Korea's top actors
'Detective' Cha Seung-won, 'Suspect of Murder' Song Yoon-ah Transforms into the main character of the thriller!
Cha Seung-won, who has been loved by many audiences for his overwhelming charisma emanating from his 188cm tall and excellent acting skills regardless of genre, transforms into the protagonist of a thriller through <Secret>. He is known for his meticulous pioneering of selecting box office films, and he chose <Secret> as a work that will risk his life as an actor. Seong-yeol, played by Cha Seung-won, is a detective who finds traces of his wife at the scene of a murder under investigation. To borrow Cha Seung-won's explanation, a character who 'gets an uppercut while unprotected'. Seong-yeol, who falls into a dilemma between a detective and her husband, is a difficult character that requires both complex inner acting and physical acting, and Cha Seung-won is determined to show the true nature of a thriller protagonist through <Secret>. Song Yoon-ah, who has been loved for her elegant image, also takes on the role of the wife of a detective who is pointed out as a 'suspect of murder' and challenges a radical transformation. As a character who keeps a mystery until the last moment, the transformation of 'Scary Yoona', who will decorate the screen with a deeper look, is enough to raise expectations.

Ryu Seung-ryong, Kim In-kwon, Park Won-sang, Oh Jeong-se, Jeong In-ki
The unstoppable performance of the strongest cast divided into characters full of personality!
Ryu Seung-ryong, Kim In-kwon, Park Won-sang, Oh Jeong-se, Jung In-ki… Excellent acting skills are the basics, and the splendid cast, who instills tension and fun in the play with their own personality and intense charisma, is one of the reasons many people look forward to <Secret>. Ryu Seung-ryong, who plays the role of Jackal, the older brother of the dead Jo Dong-cheol, leads Cha Seung-won and Song Yun-ah into a corner by directly following the criminal. Jackal's tremendous energy and charisma, roaring in anger, infuse tension in the play. Kim In-kwon, who has once again been recognized for his outstanding acting skills through <Haeundae>, is the first suspect in a murder case, taking on the opposite character of <Haeundae> and trying to transform into a chameleon. Veteran actor Park Won-sang, who has built up a long career in film and theater, takes on the role of Detective Choi, who is Cha Seung-won's colleague and rival, and plays a thorn-like character in the eyes of Cha Seung-won, seeking an opportunity for reversal. A familiar face to movie fans, Oh Jeong-se is the only witness, and Jung In-ki takes on the role of the detective chief Cha Seung-won relies on following <The Chaser>, showing off his unique acting. The unstoppable performance of the cast full of charisma, which is difficult to see in one movie, will be another attraction of <Secret>.

<Secret>, the second story of director Yoon Jae-goo's 'Saving Quartet'
“Parts 1 and 2 will be thrillers, 3 will be human, and 4 will be science fiction”
<Secret> is the second work after <Seven Days> among a total of four series that director Yoon Jae-goo envisioned. The four series, which he called the 'saving quartet', start from the common point of having to 'save' someone, but have different contents and genres. If <Seven Days> was a story of a lawyer who has to defend a murderer to save a kidnapped child, <Secret> tells the story of a detective who conceals the case to save the wife of a murder suspect. In the continuum of this ironic situation setting, Part 3 is a thriller that combines horror to save a friend, and Part 4 is a sci-fi thriller in which you have to save the Earth. “Parts 1 and 2 are authentic thrillers, but Part 3 will combine thriller with horror, and Part 4 will combine thriller with sci-fi,” explains director Yoon Jae-gu, who has been thinking of a '4 trilogy' for a long time. The unique work style of 'unique storyteller' Jaegu Yoon is that he not only creates completely different stories with one common theme, but also draws four stories in his head at the same time instead of envisioning the next after one work is finished. am. Director Yoon Jae-goo engraved one common point in his four-part series, which are completely different in content. That's the main character's name. In <Seven Days>, the male protagonist's name 'Seongyeol' and the female lead's name 'Jiyeon' appear in <Secret> as Cha Seung-won and Song Yun-a, respectively.

What are the conditions for a successful thriller? First, second, third story!
<Haeundae> JK Film's ambitious <Secret> directed by Yoon Je-gyun
Director Yoon Je-gyun of Haeundae, who created the tsunami craze that hit Korean theaters this summer. For him, who is leading JK Film as a box office director and producer of <Haeundae>, which has surpassed 10 million audiences, <Secret> is the first thriller to challenge production. The conditions for a successful thriller that he has directed and produced are the first, second, and third stories. My first impression of reading the script for <Secret> was, “It was intense and shocking. The reason why he was able to be certain that he “will definitely go into (this work) unconditionally”, explaining that he read it at once, was also the screenplay for <Secret>. The part that he paid the most attention to during the production stage was the composition of the staff. This is because his goal as a producer was “Because the scenario is so good, let’s create a ‘Thriller Dream Team’ with the best staff in Korea and make the best well-made thriller once.” After <Haeundae>, director Yoon Je-gyun released <Secret> ambitiously once again as a producer, and the reality is revealed on December 3.