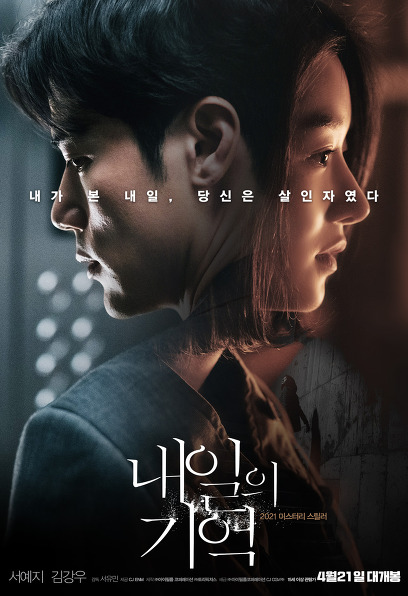 After waking up, I began to see the future of others

Next to Sujin who wakes up with lost memories in an accident
Her caring husband, Jihoon, takes great care of her.
And after returning home,
When the dangerous future of the neighbors she runs into begins to appear, Soo-jin falls into confusion.

Then one day, an old co-worker I met on the street
Worrying about Su-jin and saying unbelievable things about Ji-hoon,
In the photo that I just found, there is a man other than Jihoon in the place of the husband in the photo.

To make matters worse, Sujin suffers from the illusion of an unknown man threatening her… …

The future of others unfolding before your eyes after the accident!
Conflicting suspicions towards her husband, no one can be trusted
The birth of the most shocking mystery thriller in April 2021!
What if one day after the accident, the future unfolding before my eyes, the future of my family in that future, was the face of a murderer, and I lost my memory and had to face the difficult truth surrounding me in a situation where I didn't even know who I was? <Memories of Tomorrow> is a mystery thriller in which Su-jin, who loses her memory and begins to see the future, faces the shocking reality of her husband, Ji-hoon, as she puts together a puzzle of confusing memories. The film clearly reveals the fear of when trust in the closest person is broken and the empty space is filled with distrust and fear.

Director Seo Yu-min, who directed the film, said, "I wanted to tell the mystery and thriller genre about the fear that 'maybe there is a different side of that person I don't know' in the relationship between the lover closest to me or the family I live with." Tomorrow's memory> revealed the intention of planning. The sense of disparity that comes from the simple appearance of another person and the reality of that person that I do not know is a terrifying experience that everyone has experienced. <Memories of Tomorrow> is a story that is carefully designed so that no one can believe it while being trapped in that disparity and confusion, providing an extremely immersive feeling. In addition, the film, which approaches the shocking truth by digging up the secrets surrounding itself while relying only on the future unfolding in front of them, presents a catharsis of emotions to those who watch it over and over again.

In this way, the movie <Memories of Tomorrow>, which tracks a husband who has the face of a murderer in the future and the truth surrounding him, is expected to open a new horizon in the mystery thriller genre with unprecedented materials and stories.

Genre is perfect! 'Thriller Queen' Seo Ye-ji
The coexistence of good and evil! Kim Kang-woo, the owner of a strong acting ability
A thriller chemistry full of precarious tension explodes!
<Memories of Tomorrow> raises expectations to the climax just by meeting the self-proclaimed thriller genius Seo Ye-ji and Kim Kang-woo. Director Seo Yu-min, who made the casting of the two actors successful, said, “They are excellent actors with passion for the work, character interpretation, and expressive power. Even as a director, I caught the parts that I missed and expressed them in detail to create a unique character,” he said, foretelling the extraordinary chemistry of the two thriller craftsmen.

First, she was recognized for her acting skills by creating an unprecedented character through the drama [Save Me] and ‘Lim Sang-mi’. is expected to surprise the audience once again in her next work <Memories of Tomorrow>. Seo Ye-ji takes on the role of 'Soo-jin', a woman who digs up the truth surrounding her after losing her memory and seeing the future. In addition, actor Kim Kang-woo, who shows off his acting skills regardless of genre such as <The Lost Night>, <The Taste of Money> and <The Barrier>, amplifies the anticipation. Kim Kang-woo takes on the role of Ji-hoon, who is Su-jin's husband and tries to hide the truth that Su-jin has lost. In particular, Kim Kang-woo is expected to captivate the audience by perfectly digesting both the faces of a caring husband and a mysterious man with detailed yet profound expressive power.

The chemistry between the two actors who have shown original character interpretation in genres like this through the mystery thriller genre is undoubtedly an important point to watch in <Tomorrow's Memory>. While leading a friendly atmosphere at the filming site, the creepy chemistry of the two thriller craftsmen who said that they made even the staff immerse themselves in their perfect acting skills when they entered the filming site. .

Hye-ran Yeom, Yu-ram Bae, and Kang-hoon Kim!
The luxury actors who support Chungmuro are here!
Enhance the film's perfection with a solid lineup
The reason why <Memory of Tomorrow> can be said to be the most sought-after mystery thriller movie in 2021 is that it is because of the delicate storytelling, the meeting of the masters of the thriller genre, Seo Ye-ji and Kim Kang-woo, and the actors who show off the luxury acting across the screen and the CRT. .

First, actress Yeom Hye-ran, who is leading the box office with her excellent acting skills from the drama [When the Camellia Blooms] to [Wonderful Rumors], joined <Memories of Tomorrow>. Playing the role of Su-Jin's former co-worker and the only person who knows the past before Su-Jin's memory loss, he adds colorful charm to the movie with his superb acting ability that can handle any role 200%. Next, actor Bae Yoo-ram, who clearly reveals his presence in numerous blockbuster films such as <Chansil has a lot of hallways>, <Exit> and <Pop and Ban>, took on the role of 'Detective Bae', who pursues the truth of the case. Bae Yu-Ram breathes new vitality into the play through his unique wit and immersion that perfectly assimilates into the character. Lastly, actor Kim Kang-hoon, who boasts a splendid filmography such as the drama [Mouse] and [When the Camellia Blooms] and the movie <Transformation> and <Exit>, will show off a thrilling performance that is not like a young age. Kim Kang-hoon will appear as a mysterious character in the illusion of 'Soo-jin' in 'Tomorrow's Memory', providing thriller-like fun while increasing the suspense of the movie.

In this way, <Memories of Tomorrow>, which was created by the thriller masters Seo Ye-ji and Kim Kang-woo, as well as the most popular actors in Chungmuro, will lead the audience into a new world of mystery thrillers.

The feature debut of director Yu-Min Seo, an already recognized storyteller!
Casting bold votes for the 'mystery thriller' genre
From dramas that resonate inside viewers, to comedy that captures the 'funny' reality, to romance that brings out the love instinct. All of these are genres that director Seo Yu-min of Tomorrow's Memory has already mastered. In addition to working on the adaptation and screenplay of films that have been recognized for their work, such as <Princess Deokhye>, <You're Sounding Like Passion>, <A Dramatic Night>, and <Happiness>, the film has already been verified enough to confirm the next work <Secrets that cannot be told> before debut. Director Yu-min Seo, who has been recognized as a storyteller who has become a mature storyteller, cast a daring vote through <Memories of Tomorrow>.

"Memories of Tomorrow", which director Seo Yu-min took on from the script to directing, is a mystery thriller genre that he has never tried before. Director Seo Yu-min, who chose his feature-length debut as a mystery thriller, said, “It is a very attractive genre that immerses the audience without losing the tension from start to finish. In particular, I chose the mystery thriller as my debut work because I thought it was a genre that could clearly express the fundamental fears of humans.” The reason why the mystery thriller that director Yu-min Seo draws like this is special is because of its unique storytelling that touches the depths of human beings. Until faith leads to distrust, and until that distrust becomes the driving force that makes everything immortal and faces the truth, we persistently dig into the complex psychology of the person who doubts, collapses, and rises again, and only <Memories of Tomorrow> can provide. I succeeded in drawing suspense.

As such, the debut of director Yu-Min Seo, a storyteller recognized by Chungmuro, is amplifying expectations for the birth of a new mystery-thriller genre.

Veteran staff representing Chungmuro unite!
From <Gwanghae, the Man Who Became King> to <Taxi Driver> to <The Managers of Namsan>
A well-made mystery thriller created by brilliant collaboration!
The representative staff of Chungmuro, who write the history of Korean cinema by creating numerous masterpieces, united for <Memory of Tomorrow>. Director Seo Yu-min said, "The veteran staff with a lot of experience showed great reflexes on the field. We were able to do it with a very grateful heart while we were together,” he said, showing his trust in the production team who worked with him on his first debut film.

First, cinematographer Ki-tae Kim, who improves the quality of the work with delicate touch such as <I Am a Murderer> and <The End of the Kim Bok-Nam Murder Case>, joined <Memory of Tomorrow>. Cinematographer Ki-tae Kim actively used the composition and angles of the screen to raise the level of the thriller, and directly portrayed the psychology of the anxious and complex characters through the handheld technique. Then, director Seungbin Lee, who adds fun to the genre through color changes such as <The Managers of Namsan>, <Taxi Driver>, <Inside Men> and <Black Priests>, is directed by Lee Seung-bin to express various depths in the limited space of the movie such as apartments and construction sites. The multifaceted feeling was doubled by designing the light. In addition, Jeon In-han, the art director of <Resurrection>, <Secret Investigation> and <Sikgaek>, tried to give a three-dimensional feeling by focusing on designing differently so that the reality in the movie and the future seen by 'Soo-jin' are nuanced. Music director Kim Jun-seong of Gwanghae, the Man Who Became King, <Memoirs of a Murderer> and <Metamorphosis>, said that he focused on musically expressing the emotional catharsis that intensified as the play progressed while maintaining the thriller-like tension.

As such, <Memories of Tomorrow>, which was created through the brilliant collaboration of veteran staff members in each field, is a unique well-made thriller that will give you a sense of tension that you cannot take your eyes off of for even a moment.