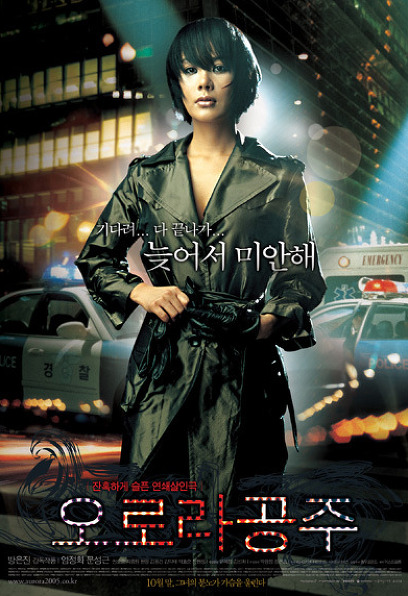 Detective Oh (Moon Seong-geun), who was in charge of the murder case, the Aurora Princess sticker that is always on the side of the body, said, “Find me… I have a gut feeling that Jung Soon-jung (Uhm Jung-hwa), who leaves the message, "is the culprit, but the commonalities of the victims are nowhere to be found. He confuses the investigation team and executes brutal murders with different methods, reveals the place of sudden murder, and draws the attention of the military, police, the media, and the public to a landfill outside the city center…

Full-fledged actress and female director Bang Eun-jin, the production team of <Peppermint Candy> and <Oasis>
The blue <Princess Aurora> of the film industry in 2005 presented by them
Since actress Choi Eun-hee took both acting and directing roles in the 1960s, there has been no female director from an actress background. <Princess Aurora>, which is expected to be a well-made film that will follow the works of previous East Films such as <Green Fish>, <Peppermint Candy> and <Oasis>, is not only surprising, but also surprising, by adapting the entire screenplay and devising the title herself. He also left a strong impression on the field staff by demonstrating his unparalleled age as a new director as a director and director. In particular, if you look at <Princess Aurora> while remembering her existing filmography, which was a bit far from a sly role as an actress in the Korean film industry, you may feel quite embarrassed. <Princess Aurora> breaks the rules of the existing genre and starts the game with the culprit. As she pursues her planned murder, at some point the reason for her murder is revealed, which is like a huge puzzle put together piece by piece, and at that moment, the 'smell of living people', which is stronger than in any other movie, soaks in the hearts of the viewers. will be. <Princess Aurora> is a new challenge for Korean cinema that will cause the biggest disturbance in 2005.

“That woman is not a bad woman! Without knowing… ”
“I have big eyes… In the middle… looks nice… ”
Unforgettable serial killer 'Soon-Jeong Jeong', who is she?
In the title of <Princess Aurora>, it is true that the gap between the title and the subject seems too wide to notice the code of thriller and serial murder at once. Moreover, it will not be easy for us to imagine the actress Uhm Jung-hwa while recalling the image of Jung Soon-jung, a rare serial killer who kills the main character of the movie, who kills five people and does not ask for forgiveness from the world. However, Uhm Jung-hwa transformed into 'Soon-jeong Jeong, a cruel serial killer who loses all her love and happiness and carries out a brutal murder plan one by one', and the ironic charm of the title and casting rather shows the extreme sadness and anger unique to the movie <Princess Aurora>. It was the driving force that brought me to the top. In particular, in the movie's climax, the landfill scene, for the scene where the criminal Jung Soon-jeong hangs the target of the murder on a large crane 30m high and receives the spotlight from the police and the media, Uhm Jung-hwa was immersed in the role of 'Jung Soon-jung' to the extent that he obtained a crane driver's license himself. Her efforts and passion will open a new perspective on 'Actress Uhm Jung-hwa' through <Princess Aurora>, and at the same time show a long-lasting, unforgettable serial killer and 'one mother' in Korean cinema.

He was slaughtered dozens of times with a bandit rack, suffocated with a plaster pack, and even genital mutilation…
There is no consistency in technique and motivation! Except for the Aurora Princess stickers…
In terms of technique, the murder in <Princess Aurora> has a higher level of cruelty than any other murder-related films in Korean films. All victims die in different ways for each character. The stepmother, who slaps her child everywhere for not calling herself mother, but slaps her child anywhere, was slaughtered indiscriminately with a bandit rack in the bathroom of a department store. Plaster packs are poured into the nose, which has been pierced by means of breathing, and he is suffocated. In addition, the only son of the owner of a charcoal barbecue restaurant, Mama Boy, is cut off with scissors for the most important part of a man. However, the relationship between the victims and Jeong Soon-jung is not easily established. However, she puts the 'Princess Aurora sticker' on all murders like her own mark, just to let them know that she is the culprit. Why the hell is she doing such a horrific serial murder? by impulse? Or for justice? But you should be careful too! It's because you don't know what kind of sympathy you might have from the perpetrator or victim's point of view the moment the secret is revealed.

'Princess Aurora' with an intense understated smile
Resurrected with stickers, the only clue in the movie!

The staff greeting the dummy… It feels more real than a real person!
A special production of dummy with a production cost of 10 million won per piece and a production period of more than one month!

The corpse of Princess Aurora's murder case was produced so perfectly that it was made to be mistaken for a real person, with a production cost of 10 million won each during a one-month production period. In particular, Jang Hyun-seong's dummy, which had to go through an arduous process, such as removing all the leg hairs and attaching cold special makeup materials to the whole body to make the dummy, used to surprise visitors with the most elaborate corpse make-up in the movie, and the staff who come and go every day Even before, when I first saw him, I thought it was Jang Hyun-seong and said hello, so he became the most popular photo model on set.

Is this really the space we live in?
Serial killings taking place in every corner of the city, capture the message on camera!

A colorful clothing store in Apgujeong-dong, Teheran-ro at night, the bustling department store interior, in the middle of Seoul Station Square, and the peaceful Namsan Mountain… In order to capture every nook and cranny of the city of Seoul, the production team had to search from the streets of Seoul to the back alleys and search for various places in Seoul through hunting in about 200 places. This is to reflect once again the meaning of this place where we live now, where we don't always think of danger while going to work, walking, meeting someone, but turning into the most precarious space through the news or when an event is published. In <Princess Aurora>, “Is this the place we live in?” It throws a message about the city center and space along with the question.

The movie's best climax is the arrest scene of serial killer Jeong Soon-jeong.
A landfill of 46,000 pyeong, an average of 370 tons of garbage per day, and 9 days of struggle!
Directly landfill and relocate hundreds of tons of garbage to create a climax scene in the movie!

The landfill scene is the most impressive scene in which serial killer Jeong Soon-jung is arrested by herself with all the police and the media in pursuit of her. This is the scene where the anger of serial killer Jeong Soon-jeong, who shows multiple personalities by hanging the last victim still alive from a large crane, reaches its peak.
About 30 vehicles including police cars and ambulances and a total of 250 extras were mobilized for the arrest scene of Jeong Soon-jeong, which was filmed at a 46,000 pyeong garbage dump in Cheongju, located in Cheongwon-gun, Chungcheongbuk-do. While filming continued all night, lawyer Kim Woo-taek (Jang Hyun-seong) and Jeong Soon-jeong (Uhm Jung-hwa), who was in charge of the crane, were dizzyingly hanging from a 30-meter-tall crane in the war against poison gas and the stench of 370 tons of garbage. It was born as the best scene in the movie where the cry of The production team of <Princess Aurora> said that the most unforgettable moment after filming was the night filming at the landfill and late-night meals (?)…

The thriller drama <Princess Aurora> is a thriller that realistically depicts serial killer Uhm Jung-hwa who throws clues at the police and the chase scenes of detectives chasing her. In particular, in the landfill scene, director Bang Eun-jin expressed satisfaction with the difficult filming, saying that filming with a large crane was the most difficult, but thanks to that, massive action scenes were able to be filmed spectacularly. However, there was also the most hidden contributor to all these scenes, and that was Kim Jae-min, director of special effects. He said, 'Catch me!' In order to make the most of the scene in which he had to descend and climb as if he had to go up and down, he made a separate stout by himself, and did not hesitate to fight an injury in which his finger was cut off during dozens of tests. Thanks to this, the high-altitude crane action, reminiscent of a super-large action movie, was captured on camera.