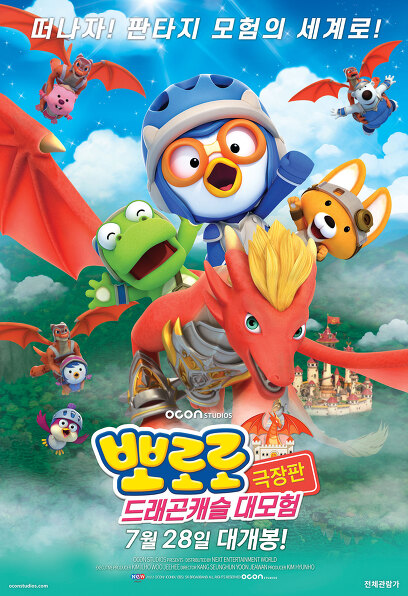 Deep in the mountains at Dragon Castle
Little Dragon King Arthur's mighty power steals the sealed gem 'Dragon Heart'
A mysterious wizard, Gad, who wants to become king appears.
Meanwhile, Crong, who accidentally absorbed the power of 'Dragon Heart'
Pororo and his friends are also in danger as they transform into Giant Crong.
Arthur, Pororo and Friends
To regain power from the villainous wizard Gad and save his friends.
I make an invincible mecha dragon and head to the dragon castle… !

A fantasy action adventure of Pororo and his friends!
Will he be able to protect Dragon Castle and his precious friends?

On July 28, the long-awaited 'President Po' returns!
Equipped with an upgraded scale, go to the theater! Pororo on summer vacation!

Korea's NO.1 animation, Pororo, the 6th movie series <Pororo Theatrical Dragon Castle Adventure>, loved by men and women of all ages, will visit theaters on summer vacation on July 28th. After the first movie series <Pororo Super Sleigh Adventure> in 2013 made a successful screen debut with 930,000 viewers, <Pororo Theatrical Snow Fairy Village Great Adventure> and <Pororo Theatrical Computer Kingdom Great Adventure> in 2017 and 2019 respectively. 'Pororo' proved its unchanging strong box office power by successfully leading the release of a total of five theater versions, including <Pororo Theatrical Dinosaur Island Adventure> and <Pororo Theatrical Treasure Island Great Adventure>, which mobilized 820,000 and 760,000 audiences. Accordingly, the sixth story that announced a brilliant screen comeback after 3 years, Pororo and his friends, Pororo and his friends, together with the little king 'Arthur', who had lost the powerful 'Dragon Heart' by the villain wizard, went to recover the Dragon Castle. The fantasy action-adventure that unfolds is drawing explosive interest from the audience. 'Pororo', which has presented various and differentiated stories and adventure sites in each series, is going on a great adventure this time to the mysterious Dragon Castle, and is expected to continue the undefeated myth of 'President Po' once again with upgraded imagination and scale. In particular, this theatrical version was officially invited to the 'Family in Another World' section of the 26th Bucheon International Fantastic Film Festival held on Thursday, July 7, as well as being awarded the 'Family Award in Another World' selected by the 'Children's Jury'. It was a splendid achievement, proving its workmanship and topicality at the same time. In addition, on the day of the opening ceremony of the film festival, 'Pororo' stood shoulder to shoulder with the best stars and heated up the red carpet scene as the main actor of the movie, solidifying its potential as the most talked-about work in the summer vacation theater.

Let's go to the world of fantasy adventure! This time it's Dragon Castle!
Pororo's first 'fantasy action adventure' was introduced and expectations are in full bloom!

The movie <Pororo Theatrical Dragon Castle Adventure>, which will be the best gift for family audiences this summer, is the first in Pororo's history to introduce the 'Fantasy Action Adventure' genre, raising special expectations. In the background of a fresh adventure stage called Dragon Castle, ruled by the dragon king 'Arthur', Pororo and his friends face the fantastic adventures of Pororo and his friends against the evil wizard 'Ged' who tries to steal the 'Dragon Heart', a jewel sealed with powerful power. and scale. The fresh genre charm of 'medieval fantasy', which was rarely seen, invites the audience to a world of unique and splendid fantasy adventures. captures at once.
While Pororo and his friends, a popular character loved by men and women of all ages, come to the theater after a long time armed with their unchanging lovable charm, they are happy to visit the theater. It will be transformed into a surprise to provide the most cuteness and fun ever. In addition, the new character ‘Arthur’, the new character dragon king, who appears through <Pororo Theatrical Dragon Castle Adventure>, presents various character visuals, not only of a cute little dragon, but also of an adult dragon flying in the sky in a stylish way. The appearance of 'Ged', a villain wizard who wants to arouse and take away the Dragon Castle, breathes fresh energy into the play and increases the immersion of the movie.

Another point to watch in <Pororo Theatre's Dragon Castle Adventure>, which foretells more spectacular sights with a fantastic 'fantasy action adventure' that catches your eyes It is an addictive OST. First, the music video scene of “This is Hammer Town,” where Pororo and his friends, who left for Dragon Castle, adventure all over Hammer Town, where the Hammer Dragon lives, is a splendid and mysterious town with fantastic landscapes unfolding in front of you, arousing curiosity, and the magic of the legend. The appearance of 'Pororo' and the little king 'Arthur', who went out to make water, stimulates the imagination of the children's audience. In particular, the cute dance moves of Pororo and his friends, who brightly embroider the music video, and the intriguing melodies that stick to the ears, make the body and mind of the audience shake. Next, the second main theme song, “I can do it,” conveys a lyrical yet light melody with a hopeful message that even if it is difficult and difficult, anything can be done with friends, and induces infinite playback by conveying the deep impression and emotion of the movie to the audience. do. With an exciting music video and OST depicting the exciting adventures unfolding in Dragon Castle, <Pororo Theatrical Dragon Castle Great Adventure> is a must-see theater film movie this summer. .