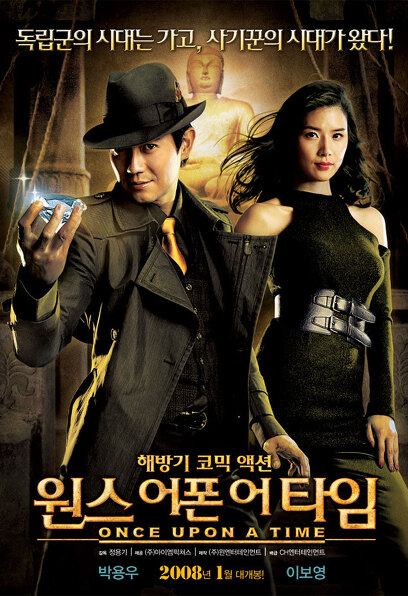 'If you know what you're trying to steal, you'll get a stomach ache!!!'

Gyeongseong under Japanese colonial rule in the 1940s…
The soul of the nation, the legendary diamond 'Light of the East' appears!

In a chaotic era when people could only survive by changing their own name, let alone calling the nation's name, Gyeongseong under Japanese colonial rule in the 1940s… Since stationed in Joseon, the Japanese military has been desperate to find the 'Light of the East', called the white tiger between the eyes of the main Buddha of Seokguram Grotto, which was called the symbol of the millennium of Silla. Finally, the Supreme Commander, who is the highest authority in the Japanese military, obtained the 'Light of the East' after years of persistent efforts, and held the 'Light of the East' farewell party to celebrate the victory and transport them to their home country, Japan, as soon as possible.

Kyungsung's best professional scammers with different plans…
The greatest operation on earth that will shake the history of Joseon has begun!!!
On the other hand, 'Bong-gu' (Park Yong-woo), the best con artist in Gyeongseong, who is known as a promising financial man, but has a thousand-faced face! In order to claim the 'Light of the East', he invites 'Chun-ja' (Lee Bo-young), the top 100-dan Kyungsung jazz singer, to accompany her to the farewell party for 'Light of the East' and seduces her with an expensive diamond ring as a weapon. However, she also has a dream of stealing the 'Light of the East' with 'Hae-Dang-Hwa', the number one thief in Gyeongseong. 'Bong-gu' and 'Chun-ja', who do not know the identity of each other, start an ambitious operation to seize the expensive diamond 'Light of the East' with different plans…

Now, the era of the independence army is gone, and the era of fraudsters has come!!
Whose hand will the 'Light of the East' fall into?

January 2008,
The greatest operation on earth to shake up Joseon begins!

liberation period,
The era of the independence army is gone, and the era of fraudsters has arrived!

A world of scammers that has nothing to do with independence? The Gyeongseong of the Liberation Period of the 1940s!

The boom of the Gyeongseong era, which started with the drama <Kyungseong Scandal> in the first half of 2007, and continued to Chungmuro, continued to the films <Nom Nom Nom>, <Radio Days> and <Modern Boy>, which are being produced recently after <Gidam>, with fresh materials and various genres. This adds to the richness of the film. Before and after the liberation of Korea in 1940, the Joseon Dynasty was a time of great change throughout society as new culture began to pour into society. Also, politically, it was a period when Japanese colonial rule was in full swing, and while there were patriots who struggled for the independence of their country, there were also anarchists who had no interest in the independence of their country. The movie <Once Upon a Time> is set in the charming 1940s, and it tells the story of Bong-gu, the best con artist in Gyeongseong who is not interested in independence, and Chun-ja, who trusts expensive jewelry and diamonds rather than the independence of his country, unlike the bad luck of the times. It illuminates another side of Gyeongseong during the liberation period of the 1940s. In other words, through the episodes between the various characters who lived in the 20th century, the focus is on the fact that it is a 'story of various people' that is no different from modern people living in the 21st century! The movie <Once Upon a Time> is about 'What really happened in the Gyeongseong Era ahead of liberation?' It will give you a variety of interesting answers to.

A 'Trinity Blockbuster' that combines the hot trend Kyungseong + Entertainment + Style!
The movie <Once Upon a Time> is a 'liberation period comic action' that will provide the best entertainment to Korean audiences during the 2008 Lunar New Year season with a material and era differentiated from the Hollywood blockbuster. Set in the gloomy 1940s at the time, the movie depicts the situation to seize the 'light of the East' stolen from Japan by presenting a comical yet suspenseful action, with entertainment and style, plus a historical meaning based on the liberation period and the Gyeongseong period. Trinity is going to show a Korean-style 'entertainment blockbuster'. The movie <Once Upon a Time> is a large-scale blockbuster movie with a net production cost of over 6 billion won, reenacting the 1940s background with Gyeongseong as the main stage like <Nom Nom>, <Radeon O Days> and <Modern Boy>. . All scenes in the movie were filmed 100% on set and all locations, and it took about two months to produce one set. In the movie, 'Miner-Pa', which is the place where 'Chun-ja', the main character of the play, sings, and also a place to simulate the operation of those who dream of independence, invests a huge production cost of about 100 million won, and it is a place where style and drama are alive at the same time. We put all our energy into making a well-made entertainment movie.

A material that has been handed down as a legend, that existed!
'Light of the East' has appeared!

National Treasure No. 24 Seokguram Head Buddha Statue, 3,000-carat diamond 'Beautiful White Tiger Statue'
<Once Upon a Time> is a movie based on a legendary diamond that is said to be embedded in the forehead of the Buddha statue in Seokguram Grotto, Korea's National Treasure No. 24. The white tiger between the eyes (hereinafter referred to as the light of the East) is a legendary diamond that disappeared after being robbed from Japan during the Japanese colonial period. In fact, the Buddha statue in Seokguram, which is preserved in Namsan, Gyeongju, is scientifically designed to illuminate the interior of Seokguram when the light hits the forehead at sunrise and is known as a Buddha statue that radiates a mysterious light. The value of 'Light of the East', created for the purpose of spreading the majesty and momentum of Silla to the world, is also a national treasure that cannot be measured in monetary terms. The movie <Once Upon a Time> is a thrilling drama to reclaim the lost 'Light of the East' from Japan with the motif of a material that existed in history. As a result, the audience will not only arouse interest in the lost Korean cultural assets, but at the same time, they will be able to taste the exhilarating catharsis of the victory over the Korean-Japanese war through the screen.