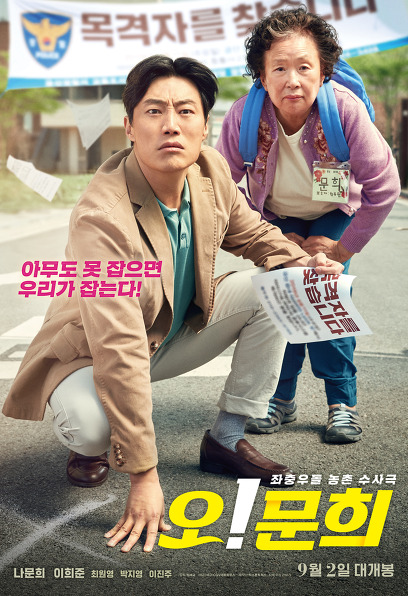 Peaceful Geumsan Village.
To 'Doo-won' (Lee Hee-jun), who has a fiery personality and a strong family love.
The news that the only daughter, 'Bomi', was hit and run, is like a clearing news.
In addition, the only witnesses at the scene were
Only the tusk 'Moon-hee' (Na Moon-hee), whose memories are flickering, and the dog 'Aeng-ja', who only barks.

'Bomi' in the hospital unconscious.
As there is no progress in the police investigation, Doowon's heart burns more and more.
However, in an unexpected moment, the tusk 'Moon-hee' remembers an unexpected clue.
'Doowon' cuts through the rice paddy with his tusks and starts to find the hit and run criminals himself!

If nobody catches it, we catch it ourselves!

accident witness
Oh Moon-hee (presumed to have witnessed it, but can't remember)
Anchovies (cannot be stated)

note
Evidence video such as CCTV and black box was secured, but nothing was seen
Deciding to suspend the investigation until decisive witnesses or testimonies appear

If nobody catches it, we catch it ourselves!
Laughter explosion! Human beauty! A rural investigative drama!
The movie "Oh! Mun-hee> is a rural investigation drama in which Mun-hee, the only witness to a hit-and-run accident, and Doo-won, the son of a firecracker, try to catch the culprit directly. With a peaceful rural village in the background, there is no perfect corner anywhere, but the human beauty of the mother and child 'Moon-hee' and 'Doo-won', a delightful joint investigation that begins as they set out to find the culprit, offers fresh fun that has not been seen in previous films.

<Oh! Moonhee> is a tussle tusk 'Moonhee', who burns with memories that have become more blurred after witnessing the accident, and her son 'Doowon', who has the best execution ability even though he has no expertise in investigations, finds small evidence one by one and approaches the culprit in the daughter-in-law hit and run case. Stimulate interest through the process. With a rural village in Chungcheong Province as the background, the vivid personalities of those who cross peaceful rice paddies, roll in muddy fields, and dig into every corner of the neighborhood to catch the criminals are the <Oh! Moonhee> Adds laughter with its unique fun point. Here, they seem grumpy on the outside, but in fact, they think about each other more than anyone else, and the deep-seated tsundere hat finds the culprit for the hit and run of her granddaughter and daughter, Bomi, and gradually gets to know each other's truth. It evokes a warm sympathy. Moon-hee Na, a national mother who was loved by all men and women through <Miss Suspicious Woman> and <I Can Speak>, and Hee-jun Lee, who proved her unrivaled presence through <1987> and <Managers of Namsan>, have perfect character synchronization and savvy Chungcheong-do dialect. , shows a special synergy with solid acting skills that go beyond comedy and emotion. Like this, set in a rural village in Chungcheong Province, <Oh! Moonhee> will deliver pleasant laughter and emotion that can be enjoyed by all ages.

The only witness 'Moonhee' X stagepo investigator 'Doowon'
Oh! Chinkemi hat is coming!
<Oh! Moonhee> The only witness whose memories are flickering, the tussle tusk 'Moonhee' and the unpredictable son 'Doowon' create unpredictable laughter and fun. Mun-hee, the tusk who witnessed the hit and run accident of her granddaughter Bomi, is the biggest obstacle in the investigation and the only hope at the same time. 'Moon-hee', who disappears in an instant with one eye, and confuses the surroundings with her unpredictable fast-talking method, sometimes brings laughter with unexpected actions, and sometimes adds tension to the play by finding decisive clues with her extraordinary memory. When he meets his son 'Doowon', he behaves like an immature child, but the image of 'Moonhee', who shows affectionate and unconditional love for his son deep in his heart, reminds us of our mother and conveys a warm sympathy. On the other hand, 'Doowon', a son with a fiery personality who neither boss nor customers have anything to fear in the world, is the owner of the charm of tsundere, who grumbles but does anything for his tusk 'Moonhee' and his golden daughter 'Bomi'. 'Doowon', who goes out to find the culprit after hearing the news that his daughter 'Bomi' had been hit and run by a hit-and-run accident, provokes laughter with his clumsy appearance, but mobilizes all his know-how as an insurance company employee to find the culprit. It gives vitality to the play by gradually approaching it. In particular, Doowon, who loves her family more than anyone else, but does not easily reveal her inner feelings, cuts through the rice paddies and fights with her whole body for the sake of her family, conveying a warm smile and emotion. Like this, the fierce breath of tusk 'Moon-hee', who can't be caught up, and 'Doo-won', a son who never gives up, announces the birth of a mother-and-child duo that has never been seen anywhere, and will provide special fun to the audience.

Oh! The first meeting you believe in!
'Na Moon-hee's first action acting challenge in 59 years of acting career
'Lee Hee-jun', a transformation master with a strong presence
<Oh! Moonhee> is the first meeting between the national actors Na Moon-hee and Lee Hee-jun, who add trust only with the name, and expects a warm and pleasant synergy. Na Moon-hee, who has captivated the audience with her solid acting that evokes laughter and emotion in each work such as <Suspicious Woman> and <I Can Speak>, returns as the character 'Oh Moon-hee' completed through new challenges and efforts. Na Moon-hee, who plays the role of 'Moon-hee', a tusk who provides a sparkly clue when she is about to give up because it is difficult to continue the investigation, sometimes provokes a pleasant laugh with her lines of murder and unpredictable behavior. And, running, climbing trees, driving a tractor, etc., he completed the character of Na Moon Hee-pyo more abundantly with a variety of action performances that he had never shown before. Lee Hee-jun, who showed a strong presence through the screen, from the reporter of the social affairs department in <1987> to the head of the presidential security office in <The Managers of Namsan>, is <Oh! Moonhee>, he gained weight for the role of father and spoke the Chungcheong-do dialect, transforming himself into a humanistic character 'Hwang Doo-won' that is 180 degrees different from his previous work. Hee-Jun Lee perfectly portrays Doo-Won, a character who shows family love as hot as he is hot-blooded as a hot-blooded father who goes on stage to catch a hit and run criminal who injured his beloved daughter. In particular, Moon-hee Na and Hee-jun Lee, who have worked with various actors regardless of age and gender, completed a special mother-and-child chemistry where you can feel the warmth of a family while fighting each other. The synergy of Na Moon-hee, who showed off her characteristic delicious and energetic acting, and Lee Hee-jun, who took off the charisma of her previous work and tried a new acting transformation into a human character, is <Oh! It will be a unique viewing point unique to Moonhee>.

Oh! Pleasant combination!
Choi Won-young X Park Ji-young X Lee Jin-joo
A solid supporting cast that spans all generations!
<Oh! Moonhee> fills the screen with a combination of actors from all generations, including Na Moon-hee and Lee Hee-jun, Choi Won-young, Park Ji-young, and Lee Jin-joo. Choi Won-young, who showed a wide spectrum of acting in dramas and movies, including [SKY Castle], is in <Oh! In "Moonhee", he took on the role of Detective Kang, who investigates hit and run cases. Choi Won-young, who plays the role of a detective who investigates the case on the front line, while comforting Bomi, the daughter of her close sister, Doo-won, whom she knew normally, had an accident. Park Ji-young, who showed a heavy presence in the movie <Queen of Crime>, dramas [Save Me], and [Incarnation of Jealousy], took on the role of 'Moon-hee' and 'Won-jang Song', who takes care of her aunt, 'Moon-hee'. Park Ji-young's realistic acting adds to the sympathy for the 'Song Won-jang' character, who nags his cousin 'Doo-won' whenever he has time, but runs to help after 'Bomi''s accident. In addition, the role of 'Hwang Bo-mi', a cute granddaughter who follows her grandmother and a cute daughter who nags like an adult to her father, 'Doo-won', is played by a new child actor, Jin-joo Lee, to revitalize the play. The movie <Oh! Moonhee> will deliver colorful and rich fun.

Oh! A real rural investigation drama!
From realistic locations to full-body hot performances
100% reality rural life!
With the backdrop of Geumsan, Chungcheongnam-do, a mother and son pursue a criminal investigation in a rural area, <Oh! The production team of "Moonhee" thoroughly researched the surrounding areas, including the Geumsan area, the background of the scenario, to find a suitable filming location. As a result, Seocheon, Chungcheongnam-do, was selected as the filming location for the house of 'Moon-hee', which is the main background of the movie. And from two months before filming, trees and vegetables were planted outside the house, and it was completed as a space that harmonizes with nature. Various places appearing in the movie, such as 'Doowon''s office, police station, and car center, were also created as spaces with traces of time and naturalness that could be found in real rural villages to enhance reality.
In addition to <Oh! Moonhee> was able to portray a more vivid rural life through the intense efforts and passionate performances of the actors. Na Moon-hee, who took on the role of the only eyewitness tusk 'Moon-hee', prepared clothes that she wore in real life, from underwear to outerwear and shoes, to increase the reality of the character. I digested the action myself. And Lee Hee-jun, who plays the role of 'Doo-won', the son of the stage boy, showed a passionate performance by directly digesting the action scenes and car actions that continued day after day against the backdrop of rice fields and muddy fields, without a double. Through special efforts such as mastering it, he perfectly spoke the delicious Chungcheong-do dialect. <Oh! Moonhee> will give the audience time to feel the warmth and warmth of a rural village.