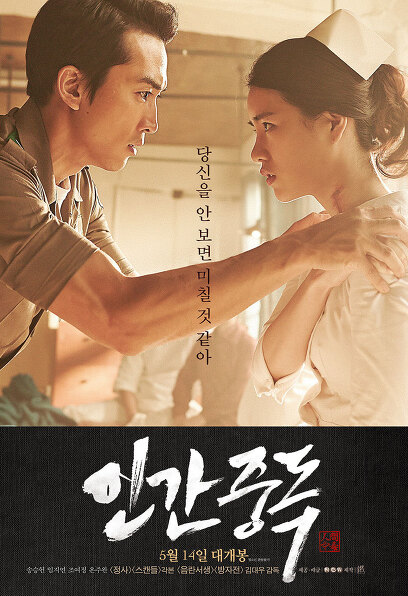 In 1969, at the end of the Vietnam War,
In a military office ruled by a strict hierarchy and hierarchical relationship!

Kim Jin-pyeong (Song Seung-heon), the education leader who is winning and winning the trust of everyone, and
Jinpyeong's wife 'Lee Sook-jin (Cho Yeo-jeong)' has the ambition to make her husband a general.
One day, 'Gyeongu-jin (On Joo-wan)', who swears allegiance as 'Jin-pyeong Kim', and his wife, Ga-heon Jong (Ji-yeon Lim), move in.
'Jinpyeong' feels intense trembling from the first meeting with 'Gaheon', the wife of 'Woojin'…

Gaheun, a woman who has a secret that cannot be told to anyone,
'Jinpyeong' is falling for her uncontrollably.
Two people who shouldn't have met
A fatal scandal that no one should know about begins in the top-class military officer!

"I can't breathe without seeing you"
"Why is my heart beating like this?"

“While contemplating the ultimate of love, the ultimate
I thought it might be simple.
'Things that can't be endured without that person, can't breathe'
The implicit expression of all these meanings is <human addiction>,
It was the beginning of this film.”

The unrivaled box office myth of an exceptional melodrama, a new work by director Kim Dae-woo!
<Human Addiction> presents the culmination of a high-quality, shocking melodrama!
Director Kim Dae-woo, who surprised the world by introducing a new story with the screenplays of <Affair> and <Scandal>, directed <Spoilers of Obscenity> and <Bangjajeon>, and showed off his wild imagination with sensational materials and a well-structured script. He also proved his delicate and captivating directing ability, establishing himself as a director who draws the most beautiful colors in Korea. In addition, <Scandal: Men and Women in Joseon> (3.52 million people), <Lawful Confession> (2.5 million people), and <Bangjajeon> (0.33 million people) were ranked in the top 5 of the 19-gold melodrama box office rankings. The director is recognized as a '19-gold melodrama box office myth' that combines both artistic and box office performance.
As such, director Kim Dae-woo, the self-proclaimed Korea's best '19-gold melodrama box office myth', returns with 'Human Addiction', which contains the unconventional love of two men and women who should not meet in the background of '1969 Military Officer', which has never been dealt with in Korean film history. Director Kim Dae-woo previously said, "I was thinking about the ultimate of love, and I thought that the ultimate could be simple. 'Human Addiction' is the very title of this film, with the implicit expression of all these meanings, 'things that can't be endured without that person, things that can't live without that person'." have.
In particular, <Human Addiction> proved the potential of the most anticipated work this spring as it has been collecting hot topics, such as dominating the real-time search rankings on portal sites whenever unconventional posters and trailers are released. In May, through <Human Addiction>, you will be able to confirm the essence of a high-quality 19-gold melodrama with a different class that only director Kim Dae-woo can provide.

What is '1969' drawn by the top class crew?
First Korean movie! A secret time and space that has never been dealt with!
In 2014, <Human Addiction>'s alluring and classy style and
The most unconventional love story is revealed!
<Human Addiction>, which was the first Korean film to be dealt with in 1969, is drawing attention as an unconventional love story about a top-class military officer.
1969, the last year of the Vietnam War, was an era of fashion and romance when a new style of culture was born in architecture, fashion, art, and music. In order to perfectly reproduce this era, not only director Kim Dae-woo, but also the best top-class producers in Korea were in full force. First, art director Kim Ji-soo, who left a strong impression on the Korean film industry with his unique works such as <A Werewolf Boy> and <The Scarlet Letter>, agreed with director Kim Dae-woo on “to perfectly preserve the beauty of the romantic and beautiful era of the 1960s.” To this end, the art team created an alluring and elegant mise-en-scène of the 1960s for the first time in Korean film history through thorough research, such as collecting real props by traveling to various places overseas such as Europe and Japan as well as in Pohang, Jeonju, and Gwangju.
In addition, director Kwak Jeong-ae, who was in charge of the costumes of <Human Addiction>, which is attracting attention with the costumes of the main characters with classic and modern sensibilities, said, "I tried to mix and match not only the clothes that matched the style of the 1960s, but also sometimes boldly modern ones. There is also hope that the style of <Human Addiction> is not simply retro, but can lead a new trend.” In addition, about the male and female protagonists Song Seung-heon and Lim Ji-yeon, who are indispensable to complete the style of <Human Addiction>, "Both actors' faces and bodies are so perfect, basic and simple outfits suited the best rather than flashy decorations. Thanks to this, I was able to perfectly complete the alluring and elegant style of the 1960s that <Human Addiction> wanted to express.”

<A Werewolf Boy> <The Terror Live> A vivid testimony from the top class crew!
I fell in love with the solid scenario first, then fell in love with the soft charisma again.
<Human Addiction>, in which Korea's top-class production crews who participated in <A Werewolf Boy> and <The Terror Live>, were dispatched, especially attracted attention with the warm atmosphere of the filming site than anywhere else. At the center of it was director Kim Dae-woo, the success story of a 19-gold melodrama. The production team agreed that they decided to join at once after reading the delicate and solid scenario of director Kim Dae-woo, which has been proven through previous films. As such, the production crew, who participated in <Human Addiction> because of their mutual trust and love for the work, say that they fell in love with director Kim Dae-woo once again at the filming site.

Lighting Director Song Hyun-seok <The Terror Live> <The Watchman>
“He guided all the staff and actors well with his natural leadership. I was able to follow along just like my older brother.”

Costume Director Kwak Jeong-ae <A Werewolf Boy>
“He is a very gentle and caring person, and through many conversations in a comfortable atmosphere, I was able to enhance my understanding of the film and shoot.”.

Cinematographer Byeon Bong-seon <The Terror Live> <The Watchman>
“The filming site was just as enjoyable as the work. Interesting scenes with different atmospheres continued, such as laughing and chatting together, but immersed in the moment the shot went in. It was a very enjoyable experience.”

Art Director Kim Ji-soo <A Werewolf Boy> <Crimson Letter>
“When I first saw the script, I felt like a ‘bird’ by ‘Gaheun’. I told the bishop about this, and Gaheun personally developed him into a bird breeder. It was an amazing experience.”

Music Director Lee Jae-jin <Elegant Lies> <Super Powers> <Modern Boy> <Our Happy Hour>
“As a creator, he respected the opinions of the production team, and I was very impressed with the way they always believed in him.”

The exceptional class is different! <Human Addiction> is unique from the place!
From cramped military cars to homes designed to focus only on acting!
The actors' passionate performances + the consideration of the production team
The behind-the-scenes story of high-quality orthodox shooting is revealed!
<Human Addiction> is going to present an unconventional love affair where you can feel the delicate emotional texture that has never been seen in Korean movies. 'Kim Jin-pyeong' (Song Seung-heon) and 'Jong Ga-heon' (Lim Ji-yeon) express their uncontrollable feelings for each other through intense love affair scenes. For this, it is said that Song Seung-heon's acting transformation, who challenges the acting of a 19-gold melodrama, and Lim Ji-yeon's hot performance, who showed audacity not like a rookie, were added to surprise everyone. In completing such a beautiful and passionate love life, the efforts of not only the actors but also the best top-class producers in Korea are hidden.

Cinematographer Byeon Bong-seon <The Terror Live> <The Watchman>
“I wanted to express it a little differently from other movies, and I wanted to make sure that the actors were not constrained by the circumstances. As much as possible, I tried to shoot with the feeling that the actors are breathing together without being conscious of the camera.”

Lighting Director Song Hyun-seok <The Terror Live> <The Watchman>
“In order to create a dense screen unique to <Human Addiction>, I paid a lot of attention to contrast and color. In particular, I tried to bring colors that were mainly used in the 60s, which are not used now. In particular, the first intense sex scene in the cramped military car of 'Jinpyeong' is the most memorable. For this scene, I made a set of the interior of the car separately, and I tried hard to capture the feelings of two men and women like their first love in the sticky air of a rainy summer.”

Art Director Kim Ji-soo <A Werewolf Boy> <Crimson Letter>
“A normal orthodox scene is filmed with one wall removed because the set is narrow, but this time, we wanted to make it possible to shoot smoothly even with the walls and ceiling covered. To this end, I proposed to director Kim Dae-woo to intentionally make the rooms for 'Jinpyeong' and 'Gaheon' bigger, and it was accepted. This allowed the actors to focus more on acting without worrying about the staff or other situations.”

A love that cannot be defined in one word,
It is finally completed with the music of 'Bach'
In order to convey pure love as it is, we insisted only on acoustic instruments.
The tension and happiness of love that cannot be escaped, perfectly tuned with music!
Director Kim Dae-woo and music director Lee Jae-jin paid more attention to the music for the unconventional and alluring love of the main characters. In particular, music director Lee Jae-jin, who expressed the complex emotions of characters in lyrical music in films of various genres such as <Elegant Lies>, <Super Powers>, <Modern Boy>, and <Our Happy Hour>, made many audiences cry. Music director Lee Jae-jin said, “‘Human Addiction’ is a very honest love story that anyone can experience. It deals with a very essential love story where you can throw away your background, knowledge, class, and position. In order to convey this as it is, we used only acoustic instruments, not electronic instruments.” He revealed that it was not easy to choose the most basic instrument to focus on the love between the two of them. In addition, director Kim Dae-woo suggested the music of 'Bach' as the music of the unconventional love affair that was most important in expressing the true love of the two. Director Kim Dae-woo said, “When I listen to Bach’s music, I can feel many emotions, such as sadness, beauty, wretchedness, melancholy, joy, excitement, and discouragement. I thought that all these emotions were included in the word 'love'.” He explained the reason for his excellent choice.
Not only this, classical music is effectively used everywhere in <Human Addiction>. Elite soldier 'Jinpyeong' heals the hardships of life by listening to classical music as a hobby in the city's music room. Also, the scene where two people, Jinpyeong and Gaheon, who fell in love for the first time, dance a clumsy waltz to express love and share memories is considered one of the best scenes in the movie.
In this way, the high-quality, unconventional melodrama <Human Addiction> is expected to perfectly satisfy the five senses of the audience by adding the classic elegance to the beautiful 1969 mise-en-scène that has never been experienced in Korean films.