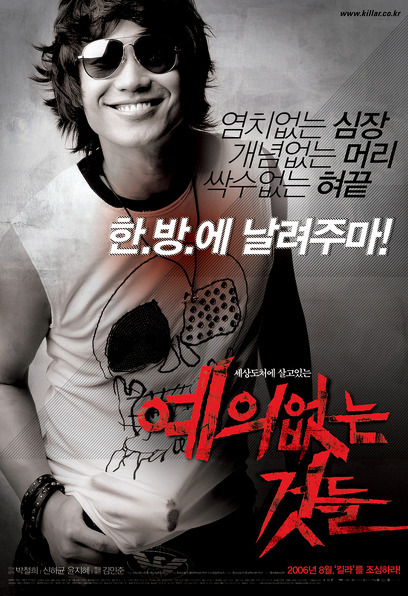 I am Killa, Killer who catches people.

'Kila' decided to live without a word rather than make a short noise and sell out. I want to live in style like a bullfight, but with my short tongue, it's not going to work. Then he finds out that he can do tongue surgery with only 100 million won. He is amazing with only one knife, but he becomes a 'killer' who catches people to raise money…

A meaningless and memoryless murder…
Oh, it's not… yes let's set the rules

'Killa' does the work as ordered, but feels skeptical at the thought that he is no different than a butcher. At that time, 'Ballet' gives sincere advice to 'set your own rules' as a senior and colleague. So, 'Killa' decided to 'select only unnecessary garbage and cleanly separate and collect only the things that are not polite to kill'. 'Killa', who has set the rules, is busy disposing of garbage in the city.

What does this woman believe in?

After work, 'Killa' drinks strong alcohol to wash the dishes from the smell of blood under the nose. Every time he stops by, there is a 'she' who is sticky and woos fiercely. 'Killa' is confused because of 'she', who is rough but shows an unknown inside, but he can't push 'her' that he likes because he doesn't have a word for some reason.

Will it end with such rude things?

One day, 'Killa' and 'Ballet' are commissioned by a man who wants to make a profit by redeveloping a traditional market. While I was trying to work carefully with the advance information that they are tough guys, I made a mistake in dealing with other guys… Killa's dream of going to Spain with her to become a matador after undergoing tongue surgery is thwarted by parasites. 'Kila' meets 'disrespectful things' that are really proper. Will he be able to blow away all the dirty, ugly and disrespectful things in the world?

There are too many 'disrespectful things' around us.

After 10 minutes, he jokes around and talks casually,
Coming out as a blind date arranger and making eye contact with the other person,
Steak when others shoot you, you buy pork belly when you shoot,

The movie started, but he came in late and covered the screen,
I'm watching a movie and quietly telling you everything about the movie,

On the way home from work, talking on the phone with a loudspeaker-like voice,
As soon as the left turn signal changes, the blinker turns on and the

Pretending to be strong only to those who are weaker than you,
Acting like a tongue in the mouth and hitting the back of the head,
..
..
..
Oh my, rude things!

Criteria for sorting out a disrespectful world 'disrespectful things'
A new rule has appeared in the world of killers. That's what it means to pick and deal with 'disrespectful things living all over the world'. The title, which arouses strong curiosity, is 'Kila''s own professional consciousness and the standard that divides the world. 'Nice things', the most moral and clear work target, determined by 'Kila', who believes that treating as ordered has no meaning or memory. We live in a rude world, and how much stress and shame we have to suffer because of 'rude things' everywhere. The audience will feel strong sympathy for the title of 'Nice things', and vicarious satisfaction and exhilaration for 'Killa who handles disrespectful things'.

A 'short tongue killa' that only handles rude things
There has never been a killer like this before. 'Kila', whose heart is weakened by looking at her kind eyes, does not match the image of a cold-hearted killer who kills without reason or emotion. Besides, a killer with a short tongue with a rule to only deal with rude things. 'Killa', who lives without speaking rather than making a short tongue, may have been born with the fatal (?) charm of 'excessive reticence' and the fate of a pro killer equipped with the essential virtue of 'absolute confidentiality'. 'Killa', who compares the world to a hot bullfight, and writes a poem called 'Forsythia', inspired by Kim So-wol's 'Azalea Flower', is immersed in emotion. <The Disrespectful Things> provides a different kind of fun through 'Killa', the only character in the history of killer movies.

'Comic noir' with laughter and pace
The genre and humor code of <Disrespectful Things> are unique. Although the appearance of the film claims to be noir, when 'Kila', who appears wearing black leather clothes and sunglasses, opens her mouth, the typical noir is undoubtedly broken. This stems from the director's intention to question, 'Isn't it necessary to talk heavily about the story of a person living as a killer in an ugly world?' However, the laughter conveyed by <The Disrespectful Things> is not just light. 'Killa' had no choice but to choose a swordsman to shake off his complex. Just as the wounds are inherent in his silence, the film is filled with witty laughter and the pace of life.

Actor 'Shin Ha-kyun' who perfectly digests a unique character
<The Disrespectful Things> is a film that is possible because of Shin Ha-kyun. Shin Ha-kyun, who has built his own world of art through <Vengeance is Mine> and <Protect the Earth> with dual images of weakness and madness, innocence and eerie. Last year, <Welcome to Dongmakgol> and <Leave When You Applaud> drew more than 12 million viewers and solidified her position as a box-office actor. Known for being exceptionally reticent, and communicating with the world through acting, 'Kila who silently opposes a noisy world' was a role that fit perfectly. It goes without saying that 'Killa', who has a cool yet quirky sensibility, also met actress Shin Ha-kyun and shined more than 100 percent.

1. You can express everything without speaking. Shin Ha-kyun's outstanding performance

Actress Shin Ha-kyun. In his acting history, Shin Ha-kyun has a color that is recognized by many. It's a bit unusual, but it's about conveying the sincerity of the characters and acting properly. Shin Ha-kyun says that stereotyped and formal characters are not well accepted. Because of his outstanding acting, <The Disrespectful Things> was able to shine even more.

In fact, there is only one word that Shin Ha-kyun speaks directly in the movie. All of Shin Ha-kyun's lines in the movie were narrated. Therefore, before filming the film, I had to record the narration in the film and learn the emotions, and then repeat all the narrations in my head during the actual filming. He even memorized the music inserted in the scene, and all the staff could not help but admire his efforts to act out the steps exactly to the tempo.

In addition to this, he did not hesitate to eat a few chilli peppers by himself for realistic acting, and actually spray a few cans of F Killa to the extent that he couldn't open his eyes properly on a closed set. Shin Ha-kyun's passion for acting, who always carefully checks the connection of every scene first and does not spare his body and mind, is reason enough to recognize him as one of the few true actors who will lead Korean cinema.

The combination of the elegant and beautiful dance 'Ballet' and the cool and strong character 'Killer'. A 'Ballerino Killer', which cannot be seen in any killer movie, was born in the movie 'Nice Things'. In the movie, 'Ballet' is a former ballerino killer who had no choice but to stop dancing due to a knee injury. For that reason, I became a killer to make space for people who want to dance but don't have space. Although he is a terrifying killer, as a former ballerino, his graceful swordsmanship is his specialty.

From the 'ballet' killer's sword skills to acting with ballet movements, Min-Jun Kim had to hone the basic movements of ballet. Therefore, even before filming began, he was trained by an incumbent dancer (modern dancer Young-Geun Hwang), and with steady practice and effort, The ballet movements, of course, created an elegant sense of the whole body. In particular, the martial arts director and ballet trainer praised him for his excellent expression of action movements that applied ballet. Kim Min-joon's performance in 'Ballet Killer', who will present elegant and beautiful action, is considered another special fun to watch the movie.

Killa, who likes herself to a matador, enjoys watching bullfighting videos, setting the killer principle of a matador-like "throw away the dirty and ugly things of the world at once". In the movie, bullfighting appears as a medium that symbolically expresses the dream of the main character, Killa. For this reason, the film crew decided to go to a local location in Spain to improve the quality of the film despite the small amount. In particular, as a result of paying special attention to the filming that had to contain the bullfighting arena, it was difficult to recruit the bullring through the local manager.

'Maestranza', a bullfighting arena in Seville, Spain, is a world-class bullfighting arena to the extent that bullfighting critics even say, 'If you don't win a match at this arena, you're not a real matador'. In fact, the inside of this bullring is a place that has not been allowed to shoot anywhere in the country, despite numerous invitations. Through the sweat and blood of the production crew and local staff, it was the first time in Korea that the stadium was able to be included in the movie "Nice Things". In addition, the filming is composed of staff who are considered to be the best in the Spanish film scene, and the unique colors and visual beauty of Spain are perfectly utilized to enhance the fun of watching and beautiful visuals in my films.

4. Empathy for <disrespectful things> that everyone has experienced and met at least once

The movie <Disrespectful Things>, which contains 'a killer story with a unique rule of picking and dealing with only disrespectful things', stimulates curiosity and sympathy from many people through its title. Therefore, as an effective way to publicize the film, we focused on the idea that “in a society with complex and diverse groups of people, you will experience 'disrespectful people and situations' at least once a day”. The focus was on building that consensus.

In June, using the big social issue of the World Cup, he produced a video that reconstructed scenes from the movie and a witty copy, which became a hot topic online and in theaters. In addition, the so-called 'multi-advertisement by medium' tailored to the situation and characteristics of offline and various online media users such as bus and subway advertisements (advertisements individually tailored to the target of each medium) stimulates an exquisite consensus among various people who encounter advertisements. It is attracting attention.

In addition, it is a clever definition of 'disrespectful things' that fits perfectly in various situations and settings, giving viewers a sense of exhilaration and vicarious satisfaction. Through the character in the movie, 'The killer who picks up and handles only the rude things,' the natural connection of the idea of 'handling the rude things that exist around you' is the basis for that exhilaration and vicarious satisfaction. The anticipation for the movie is delivered by substituting a person (Killa) who can warn and chastise modern people who often cannot shout at them even when they are angry and angry, and deliver a refreshing feeling, stress relief, and even more fun and enjoyment. leading to