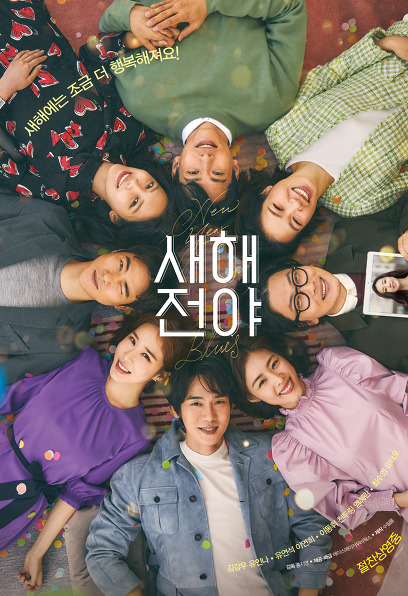 He and Detective Ji-ho (Kim Kang-woo), a detective who has been in the 4th year of divorce after being demoted from the homicide class and taking on the task of protecting himself.
Perfectionist rehabilitation trainer 'Hyoyoung' (Yoo In-na) asked for personal protection during divorce proceedings

During a burnout that came with Hyunta, he met 'Jaeheon' (Yoo Yeon-seok), a local wine delivery man who fled to Argentina.
Jin-ah (Lee Yeon-hee), a non-regular ski resort worker who recklessly left for Argentina after her boyfriend's unilateral breakup notice

Yong-chan (Lee Dong-hwi), the representative of a travel agency who was scammed and robbed of marriage funds
Yaolin (Cheon Du-ling), a bride from the continent who has been assigned to the Korean branch ahead of her wedding.
And 'Yongmi' (Yeom Hye-ran), the younger brother Baragi's prospective sister-in-law, who is troubled by his only younger brother's international marriage

Paralympic national team member 'Rae-hwan' (Yoo Tae-oh) feels sorry for his long-time lover after confronting the prejudices of the world
‘May’ (Choi Soo-young), a horticulturalist, a strong positive queen who believes that there are no obstacles in the face of love.

One week until the new year
A frightening but thrilling story of four couples who want to be a little more happy begins!

100% Empathy Index 200% Hope Index for the New Year!
#Employment #Dating #Marriage The difficult year is now over!
A real happy turning point for four couples who want to be happy!

The week from Christmas to the New Year is a time to wrap up the year and prepare for the coming new year, giving everyone an excited atmosphere as well as vague fears about the future. This winter, a special story to forget the difficult and difficult things and deliver new hope comes. <New Year's Eve> is a work depicting a week full of fear and excitement between four couples who want to be a little happier in the new year after the off-season of their lives. The movie <New Year's Eve> stimulates the consensus of the audience by putting the most common worries that anyone can experience and go through, such as employment, love, and marriage, in the story of four couples.

The romance of 'Ji-ho', a detective who has been in the 4th year of divorce, and 'Hyo-young', who asks 'Ji-ho' for personal protection during a divorce case, is realistically sympathetic through the fear of a new love due to the failure of the past love. causes 'Jae-heon', who ran away to Argentina after a sudden burnout while running, and 'Jin-ah', who went on a trip without love or work, find a turning point in their life, representing young people who are suffering from growing pains and worries about the future. I offer my sincere condolences to those who want to. 'Yongchan' and 'Yaolin', a prospective couple preparing for an international marriage, and 'Yongmi', a prospective sister-in-law, Baragi, who is troubled by the marriage of her one and only brother, share a variety of sympathies through cultural differences and language barriers and becoming a new family. will lead to The couples 'Rae-hwan' and 'May', who unintentionally build up misunderstandings due to the prejudices around them, realistically portray the crises and worries of long-time lovers, and will show a strong romance that will cheer them on. In this way, the four couples in <New Year's Eve> will shake off the hardships before the start of the new year and send warm support that they will be a little happier in the new year, and will move the audience's hearts with a universal consensus that encompasses all generations.

Director Hong Ji-young, who was in charge of directing, said, “I hope that it will be of comfort to all of us who have had a difficult time than ever before.” Through <New Year's Eve>, we wish the audience who must have had an exceptionally difficult time in 2020 to end the year well and get better in the new year. The message of warm support to be happy and the energy to welcome a hopeful new year will be boosted.

It's a new year, so <New Year's Eve>!
A new season movie is born!
A special movie for lovers, friends and family this winter!
The movie <New Year's Eve>, which depicts the most exciting week this winter, is the only movie for the year-end season that you want to see with your lover, friends, and family, gathering the expectations of prospective audiences. <New Year's Eve>, which tells the story of four couples who want to become happier from Christmas to the New Year, is a universal film that can empathize and understand each other, whether it is a loved one, a friend who shares worries, or a family who always protects you. Let the story naturally immerse you in the play. In particular, you can feel the unique atmosphere of the year-end in the first row of the auditorium, from the warm sensibility of the season of winter that fills the screen, to the music that exudes a colorful year-end atmosphere, to the sparkling tree decorations and the New Year's countdown fireworks display. Moreover, it will give the audience a special impression as they can feel the exotic end-of-year scenery of Argentina on the other side of the world, and it will also provide a special screen trip to Argentina for the audience who had to give up their travel this year in 2020.

The movie <New Year's Eve> is enough to capture the hearts of the audience who want to feel the splendid atmosphere of Christmas and the excitement ahead of the new year. <New Year's Eve>, filled with bright and warm emotions from Christmas to the New Year, is the only season movie where you can feel the year-end atmosphere with your loved ones who want to spend the end of the year together, giving the audience a time of healing this winter. something to do.

First, Kim Kang-woo, who is gaining public sympathy by showing strong acting on the screen and CRT, and Yoo In-na, a lovely roco goddess, meet as 'Ji-ho', a detective with 4 years of divorce, and 'Hyo-yeong', a rehabilitation trainer who requested personal protection during a divorce case. The romance chemistry will add fun to the play with a different charm. It is said that Kim Kang-woo, who met director Hong Ji-young again after <The Night Before Marriage>, showed a strong trust in each other and acted more comfortably than any other character. Yoo In-na, who has been on a screen outing after a long time, takes on the role of 'Hyo-young', who is strong on the outside but softer than anyone else on the inside, and shows off a 100% synchronized performance. Next, Yoo Yeon-seok, who captivated women with her soft charm, and Lee Yeon-hee, a pronoun of innocence, add to their curiosity with their youthful chemistry. Yoo Yeon-seok takes on the role of 'Jae-heon', a local wine delivery man, and shows off the charm of a tsundere that cheers 'Jin-ah' more than anyone on the outside, but radiates a free charm that has never been seen before. Lee Yeon-hee, who plays the role of 'Jin-ah', who traveled to Argentina without any measures, is planning to show tiki-taka chemistry with him.

Lee Dong-hwi, Cheon Du-ling, and Yeom Hye-ran met as a global preliminary family. Their stories, completed with a fresh casting combination as well as trustworthy acting skills, are expected to increase the satisfaction of the audience. Lee Dong-hwi, who takes on the role of 'Yong-chan', a bride-to-be who is preparing for an international wedding, not only has a delicious performance, but also has perfect Chinese dialogue ability, which makes us guess what director Hong Ji-young said, "You will see a new side of Lee Dong-hwi." Chinese rising star Duling Chen, who plays the role of 'Yaolin', added perfection to the play through perfect collaboration with fellow actors and staff, even though it was his first appearance in a Korean movie. Here, the prospective sister-in-law 'Yongmi' will be played by actress Yeom Hye-ran, and will show sibling chemistry like 'Yongchan'. On the other hand, actor Choi Soo-young, who is broadening the acting spectrum by digesting various characters with stable acting skills, and Yoo Tae-oh, who emerged as a popular actor by revealing a strong presence in each work, face the prejudices of the world that came before love Draws a lover's dilemma. Their fresh combination and sincere story are expected to capture the hearts of the audience.

<New Year's Eve>, in which all the actors who are said to be introverted, gathers anticipation for their passionate performances. Director Hong Ji-young, who was in charge of directing, praised the actors, saying, "It is not easy to cover the story of four couples in two hours, but thanks to the actors who performed well, we were able to finish it in a beautiful and dense film."