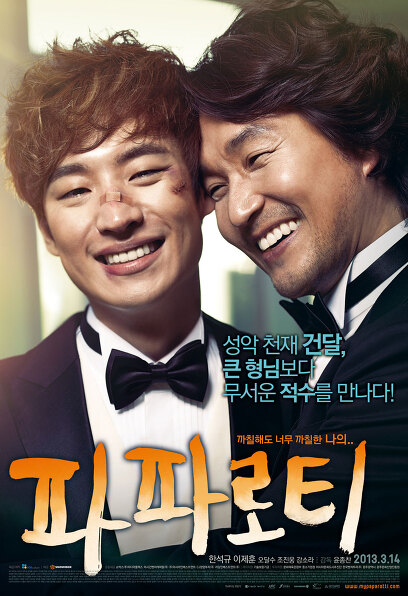 Sang-Jin (Han Seok-Gyu) was once a good singer, but is now a music teacher at a rural high school. He is full of cold zeal for education and rudeness, and a mission like clear skies falls. Teach Jang-ho (Lee Je-hoon), a gangster who has a natural talent for singing, but who entered the world of fists early, to win a prize in a contest. On the first day of transfer, it was not enough to show up with his shoulders in a black car, and Sang-jin, a student, was dissatisfied with the pattern of taking calls from 'Big Brother' during class. It draws conclusions without even having to listen to Jang-ho's song.
“Don’t you have to dip it in poop or soybean paste and eat it?!”

Jang-ho, who was born with two talents for fist and singing, jumped into the world of fists due to a difficult family environment. Although the reality is that he doesn't know the name of 'Pavarotti', he never forgot his dream of becoming a singer. Jang-ho is furious at the attitude of his teacher Sang-jin, who ignores every case, saying, is it a classic to do things like dogs or cows as hobbies? However, Jang-ho, unable to give up on his dream, continues his relationship with Sang-jin, who is difficult and harsh…
“Sam. It's my shit!”

“When I’m performing, I can’t hear what people say.” – Luciano Pavarotti
“The world I hear is more beautiful than the world you see.” – Stevie Wonder

“Isn’t it also pleasing to learn and sometimes learn?” – Confucius
“Keep your way towards your dreams” – Oprah Winfrey

“Should I eat poop or soybean paste?! Hit me when you say something nice.”
– Na Sang-jin, a cynical rural teacher

vocal genius gangster,
Meet an enemy who is more terrifying than your older brother!
<Paparotti>

When a gangster meets a classic!
A delightful ensemble of fresh materials and unpredictable characters!
The movie <Paparotti> is a work depicting the story of a vocal genius gangster 'Jang-ho', who is a gifted singer even though he is a member of an organization, meets 'Sang-jin', a music teacher who is more cynical and cynical than his older brother. Characters such as gangsters and gangsters in Korean movies are familiar materials that have been borrowed many times regardless of genre, from comedy to action and noir. Variation of differentiated fun that has never been seen before.

'Jang-ho', who committed himself to the world of gangsters at a young age due to family circumstances, has a natural talent for vocal music. Born with two talents that can never be reconciled, and living as a gangster who manages a business by night and a student dreaming of becoming a singer by day, Jang-ho, a high school student, is the scariest opponent of his older brother, not his organization, but ignores him from the moment he sees his true worth. The cynical teacher to throw away is 'Sangjin'. In this way, the conflict and story that two characters, armed with a reversal charm that overturns the character's archetype, clash tightly, create a pleasant laugh from the beginning to the end with unexpected surprise and personality. And like water and oil, the process of communicating and changing between two men who never seemed to mix in various incidents and troubles, like the melody of an opera that gradually rises towards the climax, rushes towards the best moment, giving an unforgettable impression. The rich laughter and emotion created by the unpredictable characters appearing at the intersection of gangster and vocal music will captivate the audience with warm and intense fun like the spring sunshine in March 2013.

National actor Han Seok-gyu + hot star Lee Je-hoon
Two actors representing the generation, the 'luxury ensemble' was born in 2013!
Han Seok-gyu, an actor who has been with the box office history of Korean films such as <Ginkgo Bed> <Green Fish> <Number 3> <Connection> <Christmas in August> <Shiri> and <Berlin>. National actor Han Seok-gyu, who has built the perfection and box office success with his unrivaled presence in the drama [Deep-Rooted Tree] last year, came back as 'Sangjin', a tough teacher full of loopholes but full of humanity. And Lee Je-hoon, who created a craze for first love with <Introduction to Architecture> and established himself as a leading actor in his twenties, becomes a rough but pure vocal genius gangster ‘Jang-ho’ who sets up a tight confrontation with Han Seok-gyu in the play, creating a luxury ensemble that will never be seen again. will be presented Sangjin, the owner of the cynical values, “You can tell if it is poop or soybean paste by pretending even if you haven’t tried it” and “It’s my shit! Can a gangster not sing?” and asks the gangster Jang-ho, who does not lose his passion for his dreams, creates fun with his personality as if the role relationship between the existing priests has been reversed, while creating explosive synergy with Han Seok-gyu and Lee Je-hoon’s acting breath. pay The character of Sangjin, who is cynical and cynical, but pays attention to and listens to his talent the moment he hears Jangho's song, seems to be Han Seokkyu's bluntness, but it touches the heart with the humanity and warmth that is melted in it. Jang-ho, who has , was completed as a more realistic and sympathetic character by adding Lee Je-hoon's delicate and deep eyes. The acting breath and synergy of the two actors who have represented each generation with acting with different personalities and textures will be a powerful viewing point unique to <Paparotti> as a combination of fantasy that is hard to find again.

Just being there is reassuring!
Actors Oh Dal-soo, Jo Jin-woong, and Kang So-ra join the box office
In the movie <Paparotti>, the best actors who have proven their acting and box office skills through various works such as Oh Dal-soo, Jo Jin-woong, and Kang So-ra fill the screen seamlessly.
Actor Oh Dal-soo, who disarms the audience with his unrivaled charm and friendliness in each work from <Detective of Joseon>, which gave a burst of laughter the moment she appeared, to <The Thieves> and <The Gift of Room No. ' took on the role. Oh Dal-soo, who plays the role of 'Deok-saeng', who supports Jang-ho while watching Sang-jin's harsh eyes in the ironic relationship of being Sang-jin's boss at the same time as a junior at school, plays a role of humor that causes laughter even in seriousness.
Actor Jo Jin-woong, who is continuing his active work based on his solid acting skills from <Gojijeon> <War Against Crime> and <Suspect X>, is deeply concerned about Jang-ho, who has no place to lean on, and breaks down into his older brother Chang-soo, who protects him. show off the acting. Jo Jin-woong, who worked with Lee Je-hoon for the second time following <Gojijeon>, plans to exude a unique aura through <Paparotti> with a deep human charm.
Lastly, the role of Sook-hee, the mascot of Kimcheon Arts High School, Hong Il-jeom of <Paparotti> is played by Kang So-ra, the heroine of <Sunny>, which mobilized 7.5 million viewers, and built a multi-casting line that will ensure the rich fun of <Paparotti>. Kang So-ra, who plays Sook-hee, a fearless and confident high school girl with her unique youthful and energetic charm, breathes life into the play with her partner Lee Je-hoon, sometimes boldly and sometimes freshly.
Centering on Han Seok-gyu and Lee Je-hoon, Oh Dal-su, Cho Jin-woong, and Kang So-ra worked together as their juniors, bosses, bosses and older brothers, friends and students, respectively. The characters and episodes created by the three actors with their own charm and acting skills will be the fun of the movie <Paparotti> not to be missed.

Thrill and catharsis meet on the screen!
From orchestras to luxury classics, to the excitement of the last stage!
<National Team> <Beauty is Painful> Music Director Lee Jae-hak participated
If the unexpected characters and their clash create laughter and fun unique to <Paparotti>, ‘vocal music’, the only common denominator between Sangjin and Jangho, becomes the hidden protagonist of <Paparotti>, a new thrill that has not been experienced in other films. and provide an impression The most famous aria from Puccini's opera <Tosca>, 'The Stars Shine', 'Nessun Dorma', which is familiar to the public through the voices of various people including Luciano Pavarotti, Paul Potts, and Korean idol singers, Music that covers various genres, such as Sunflower's 'Happiness Giver' reinterpreted as an orchestral performance, is a pleasure to listen to and stimulates the five senses. The rich music of <Paparotti>, which spans from luxury classics to operas and songs, has created unprecedented hit OSTs such as 'Butterfly', the theme song of <National Representative>, 'Maria' and 'Star' of <Beauty is Painful>. It was completed with the collaboration of music director Lee Jae-hak and music director Lee Sang-hoon, who is actively working as a classical and film music producer, raising expectations.

I've dreamed of becoming a singer since I was little, but I can't even memorize the name of 'Pavarotti' properly, and the main stage is the first song sung by gangster Jang-ho, who has only a business and karaoke bar, to the songs containing the stories of the main characters, which flow along the emotions and dramas of the characters. Paparotti>'s music is intertwined with the development of the story, and it penetrates the ears and hearts with more than simple music. Sangjin and Jangho, who were communicating through music from an quarrelsome fight to the best moment, the thrill of the final stage that the two men pour into their hearts will become an unforgettable scene of <Paparotti>, providing a thrilling catharsis.