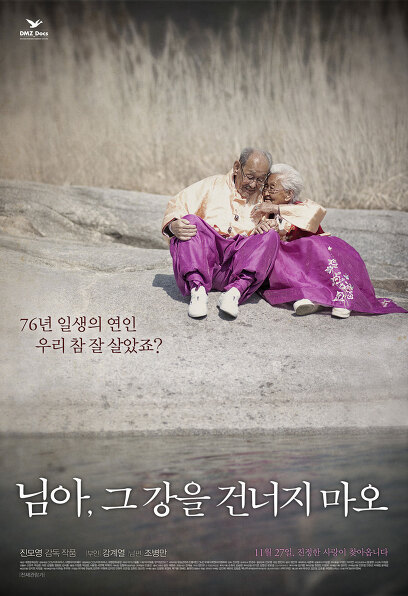 We have been lovers for 76 years.

A small town in Hoengseong, Gangwon-do, where a small river flows

In the spring, we pick flowers and put them on each other's heads, and in the summer we play by the stream.
In the fall, they throw leaves and play games, and in the winter, they have a snowball fight. Every day is like a newlywed, white-haired old couple.

One day, when all the grown children left for the city and depended on each other,
The puppy 'Little', whom my grandfather loved, suddenly dies.
After burying the little boy and returning home together, Grandpa's energy is getting weaker…

In the raining yard, listening to her grandfather's coughing sound more and more frequently, the grandmother prepares for another farewell to come as she looks at the dog who has lost her friend and is left alone.

In a mountain village in Hoengseong, Gangwon-do, an elderly couple who is well-known as a parakeet couple lives. The husband and wife of 98-year-old Jo Byung-man and 89-year-old Kang Gye-yeol. Even her husband, who was strong like the woodcutter in a fairy tale, loses his energy and suffers from coughing all night long. The wife often sits by the river in front of the house and silently looks at the river. I come to the idea that that river that my husband and I often cross and cross will be the first river my husband will cross while leaving him alone.
(The 6th DMZ International Documentary Film Festival, 2014)