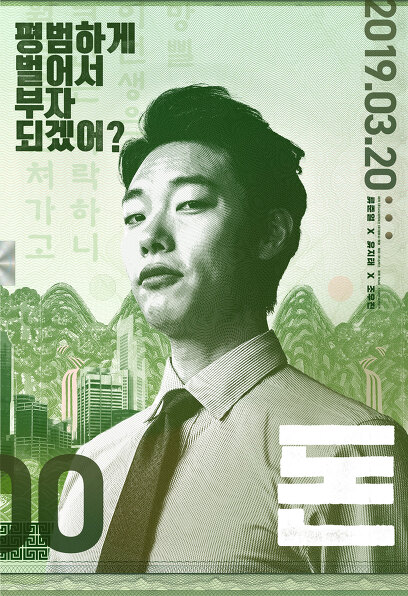 “I wanted to be rich”

Jo Il-hyeon (Ryu Jun-yeol), a new stockbroker, entered the Yeouido securities district with the only dream of becoming rich.
With no backbone or line, he pays a fee of O Won and is soon on the verge of being fired.
In a moment of crisis, he meets No.-Pyo (Yoo-Tae Yoo), a mythical planner who is shrouded in veil, and is offered to participate in a transaction that can make a huge profit.
After accepting a risky offer, Il-hyeon makes a lot of money in an instant.
Han Ji-cheol (Jo Woo-jin), a hunting dog from the Financial Supervisory Service who was chasing after the number plate, appears in front of Il-hyeon, who is struggling to win and starts to tighten him…

Can you imagine a world without money?

Everyone dreams of being rich, but not everyone can become rich.
A world where money makes class and money makes character.

This movie is in a world where money has ruled over humans.
A very ordinary person is ruled by money
Follow the process of transformation.

Desire that goes on without knowing the end
Suffering on the border of a single conscience
The main character is only an infinitely weak existence in front of money.
However, his transformation could lead to another growth.

Through the appearance of a protagonist who is no different from all of us.
If it were me,
What choices do you make and what responsibilities do you have?
For what the hell are we living so fiercely?
I hope that it will be an opportunity for you to ask yourself and look back.

'Everyone dreams of being rich, but not everyone can become rich'
'Money', which everyone wants but not everyone can have
'money'. only one letter. But the hopes, desires and dreams of the world are all contained in this one letter. From a certain moment, the greeting 'get rich' became the best blessing, and 'money' became a life goal that everyone dreams of but cannot easily have. Korea in the 21st century, where it has become common knowledge that 'money' makes 'money' rather than people earn by hard work. The movie 'Money' is a story about 'money' that unfolds as the main character of a new stock broker who enters the Yeouido securities district where the most money moves in Korea because he wants to become rich.

Il-hyeon (Ryu Jun-yeol), the main character who joined the industry's No. 1 securities company, but has no back or lines, is frustrated in front of the high wall of reality. However, the process of meeting the operational designer No. Pyo (Yoo Ji-tae) and transforming from a zero-won situation to a person who earns billions of dollars in just a few clicks is dramatic in itself. With the increasing risk of transactions with number tags, the pursuit of a hunting dog (Jo Woo-jin) of the Financial Supervisory Service begins, creating tension reminiscent of a spy play.

The reason why you can sympathize with the protagonist while watching the protagonist get drunk on the taste of success that money shows is probably because everyone has the same dream. The temptation of big money, a risky operation that involves a lot of risk, and the sweetness of money and success. And behind that sweetness, even the enormous price demanded by 'money'. The movie <Money> follows the process of change and growth of the main character Il-hyeon, and it is fun to watch what his final choice will be, and what is 'money' in this age where 'money' takes precedence. Also, if it were me, it would make me look back on what choice I would have made.

Appeared in episode 60 out of 67 episodes!
Ryu Jun-yeol, who shared everything with <Money>, contains A to Z!
The movie <Money> is a movie where you can see the most diverse expressions and emotions of Ryu Jun-yeol on one side. From the drama [Reply 1988], which first properly made him known, to <The King>, <Taxi Driver>, <Solo Battle>, to <Money>. Ryu Jun-yeol, who moved his heart with the realism of a young man who always exists, regardless of the background and genre of the times. In <Money>, he not only appears in the most colorful filmography history, enough to be called 'Ryu Jun-yeol's A to Z', but also appears in episode 60 of the 67 episodes, leading the story by acting as the mainstay of the film.

A young man with only a dream and passion to become rich. As a futuristic figure of job seekers in their 20s, he entered the dense Yeouido building forest as a new employee. shines with passion Unlike his predecessors with high performance, he is a zero-dollar idiot, despairing of the gap between ideal and reality, impatience and anxiety in the process of seizing a chance to earn big money, confidence in success after dealing with big money, and finance. Conflict and anxiety caused by the supervisor's pursuit, etc. The change of Il-hyun, played by Ryu Jun-yeol, shows the variety of charm that can be called a different person from the beginning and end of the movie. Another point to watch is to see a variety of fashions, from the hustle and bustle of a new employee who is still unfamiliar with a suit, to finding a style that suits you and becoming more stylish as you accumulate and earn money. The contrast between the innocence that money can't buy and the confidence that money brings, and following Il-hyun's changes, become dynamic due to Ryu Jun-yeol's three-dimensional acting skills.

The confrontation and ensemble of actors surrounding Ryu Jun-yeol

#One. Ryu Jun-yeol & Yoo Ji-tae & Jo Woo-jin, a tight triangle
The mood changes when Il-hyeon, who has 0 won performance, meets a veiled planner's number tag. Yoo Ji-tae, who has a sharp yet heavy voice and natural dignifiedness, appears in the role of No. It is also thanks to Yoo Ji-tae's threatening energy that the audience gets nervous every time he gets a phone call. Han Ji-cheol, the chief prosecutor of the Financial Supervisory Service, who monitors and tracks illegal transactions, and Jo Woo-jin, who tenaciously digs into any role and convinces him the moment he sees the essence of the character, takes on the role of a hound, along with the number plates of Ryu Jun-yeol and Yoo Ji-tae. The tense triangle of <Money> was completed.

#2. Ryu Jun-yeol's co-workers Jae-young Kim, Man-sik Jeong, Jin-ah Won, Min-jae Kim, and Jong-su Kim!
From the time he was a new employee to growing up as the number one ace, his colleagues at Dongmyeong Securities, the jungle where Ilhyun had to survive and the base of his life, were also richly filled with actors with both personality and acting skills. Kim Jae-young, who portrayed a bright and attractive appearance in the recent drama [Eun-ju's room], is Il-hyun's motive for joining the company, including appearance, specifications, and home environment. Although it is in contrast to Il-hyeon in every way, Ho Hyeong-ho Je-ha takes on the role of Jeon Woo-sung, a brother-in-law of loyalty. The role of Il-hyun's boss, Deputy General Manager, is played by Jeong Man-sik, who exudes humanity, unlike his strong impression, and inspires laughter between Il-hyun's tough daily life with the realism of a subsistence-type boss that seems to exist in any workplace. Won Jin-ah plays the role of Park Si-eun, who stimulates Il-hyeon's admiration, and Kim Min-jae, the manager, Yoo Min-jun, the ace who introduces Il-hyun's number plate. In addition, Kim Jong-su played the role of Manager Kim of Sales Team 1, who was worried about Il-hyun when his performance was zero and protected Il-hyun as if he was worried about it when he built high performance.

The Mecca of 'Money', the realization of the Yeouido Securities District!

A place where the average daily transaction value of 7 trillion won comes and goes. The Mecca of 'money', where the most money moves in Korea, as well as the subject and background of the movie. The production of the movie <Don> is directly connected to 'Yeouido'.

#One. Director Park Nuri, 24 hours of Yeouido completed with over a year of commuting and coverage
Since the audience has to feel real, during the scenario stage, director Park Nuri went to Yeouido for about a year in line with the actual departure and arrival times. From 7 a.m. before the market starts to 5 p.m. when they leave. I wrote the screenplay while taking the train to Yeouido and watching people in a cafe right next to the stock market. In addition, we interviewed former and current people in various occupations working in Yeouido and the securities district, such as stock brokers and fund managers, to hear their vivid stories. Although the understanding of the scenario was improved through a long and difficult process of coverage, in the production stage, it was removed as much as possible so that the audience could watch the movie easily and fun without knowledge of stocks.

#2. Dongmyung Securities’ office and location built on a space of 600 pyeong in the middle of the office town!
To what extent will the production team realistically capture the image of Yeouido, the main stage of the movie? With that question, I started production design and location hunting. The work, which started under the principle of excluding fakes and sets as much as possible, led to the question of how to implement a space with traces of life, such as restaurants and bars stained by hand in alleyways, behind the forest of buildings that come to mind when you think of 'Yeouido'. The production team, who wanted to see Yeouido like a living being with joy and sorrow, even at a crosswalk and a traffic light, first turned an empty 600 pyeong building in the middle of an office town in Mugyo-dong in downtown Seoul into a Dongmyung Securities office. The scenery outside the window after the set was shot is not a typical CG work method, but rather a realistic forest of buildings and the dense skyscrapers of Yeouido. In addition, the realistic 24 hours of Yeouido were realized on the screen by combining 140 real spaces.