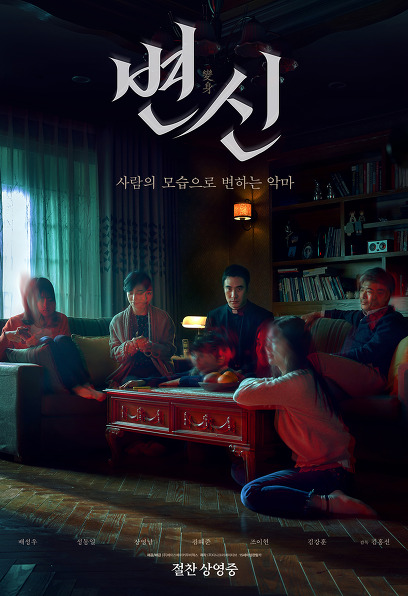 “Last night there were two dads”

As a demon that transforms into a human form hides in our family,
Strange and terrifying events take place
In the midst of doubting, hating, and anger
Uncle 'Jung-soo', a priest of Kuma, comes to visit without notice…

transformation
The devil transforms into a human and disturbs people.
A movie about a new demon you've never seen before

A new, never-before-seen horror film about the devil is coming in 2019. The movie <Metamorphosis> is a horror thriller that depicts a bizarre and eerie incident that takes place when a demon transforms into a human form and hides within a family. All the actors who appeared in <Transformation> said, "<Transformation> was special". If the known horror movies were possessed by the devil or the appearance of an evil spirit or spirit in surprise, <Transformation> is because the movie is based on the premise that the devil can transform himself into a human.
Starting with such a fresh concept, <Metamorphosis> deals with doubts and rifts in the gap between the loved ones who thought they were the closest and best known in the world, as well as the anger and hatred that arise as a result. Jung-su (Bae Seong-woo), an exorcist and uncle of the Kang-gu family, said, “Just as there are different types of humans, there are no identical people and no identical demons. It is said that they appear in various forms, but sometimes they appear in what we know as possessiveness, and sometimes they torment the soul in an invisible form, or even transform into someone’s form like an illusion.” The form will be described. The most important goal of the movie <Transformation> was to produce the demon's form that Jung-soo explained, the reality of the demon transformed into someone's form. Also, how to reveal the appearance and lull of the devil in one scene was a related task. From the stage of the adaptation, director Kim Hong-sun meticulously planned at what point the family would disappear, a demon with the face of a family would appear, and whether the devil would abdicate. In fact, in a scene in <Metamorphosis>, if Kang Goo (Seong Dong-il) on the second floor is a devil, then there is a director who is a real father for Kang Goo (Seong Dong-il) on the first floor, which gives the highlight of the horror. It's the audience's turn to meet the reality of the devil they've never seen before in <Transformation>, in which the actors speak together.

The movie <Transformation>, in which a demon transforms into a human form appears, will take you to a new world of horror that has never been felt in Korean movies.

The appearance of a demon that transforms into a human form
Who is the family and who is the devil! unable to relax
The ultimate horror experience!
In the movie <Metamorphosis>, you can feel the tension of not knowing who will become the devil throughout the running time because of the unprecedented concept of the devil transforming into a human form at will. The story unfolds in which the devil who turns into a mother with a knife this morning and turns into a father with a knife tomorrow night heralds a breathtaking development that does not know who will attack whom. In fact, even after the blind premiere, the audience picked “the fear of the devil who constantly changes faces” as the biggest viewing point for <Transformation>.

The unique story concept of <Transformation> can be felt more clearly in the scene where the first Seon-woo (Kim Hye-joon), who feels the strange phenomenon of Kang-goo's family, where the devil is hiding, asks for help from his uncle Jung-su (Bae Seong-woo), the exorcist priest, to solve it. . Just like the lines of her daughter Seon-woo, “I had two fathers last night,” the audience can feel tension just by watching the people who are in danger because of the demon who has changed into the shape of a close family. The scene where everyone gathers in one room to fall asleep in order not to become a demon is also an interesting scene that explains the characteristics of the devil in the movie <Metamorphosis>. The tension of not knowing who will become the devil gives you the fun of riding a roller coaster. Here, director Kim Hong-sun paid attention to the outdoor location and set shooting as much as possible to express realistically. The tone of the film was also taken care of to make the audience feel 'probable' through the colors that are not too distorted.

The movie <Metamorphosis>, where the concept and directing that was never before met, will become an extreme experience-based horror movie this summer.

Bae Seong-woo – Seong Dong-il – Jang Young-nam A scary transformation!
Kim Hye-jun-Jo Yi-hyun-Kim Kang-hoon Discovery of the Year!
<Transformation> was full of fun just watching the acting!
Actors Bae Seong-woo, Seong Dong-il, and Jang Young-nam, who provide in-depth acting regardless of the media such as plays, movies, and dramas, decorated the first credits for the <Transformation> scenario. New actors Kim Hye-jun, Jo Yi-hyun, and Kim Kang-hoon, who were selected through an audition, joined here. <Transformation> is a movie full of fun just watching the performances of veteran actors and new actors.

Bae Seong-woo said, "I read the script for <Transformation> and wanted to appear just because it was fresh. “I thought it would be a horror movie with an unexpected subject matter,” he said. In the movie, Jung-soo, played by him, is a character who has to have the professional ability as a priest of the exorcism and warmth as the uncle of the Kang-goo family. It was one of his moves to act with care so that this balance did not collapse. Sung Dong-il, who became the national father through the [Reply] series, raises and releases the audience by freely moving back and forth between the devil's face and his father's face in <Transformation>. Actor Seong Dong-il, who has worked with director Kim Hong-seon several times, said that he enjoyed reading the script for this movie <Metamorphosis> and expressed his anticipation for his first horror film project. Jang Young-nam is going to show a new face she has never known before, and her demonic performance at the beginning of the play is expected to provide a probability that will not even 1% doubt the existence of a demon. Since all three actors are veteran actors among veterans, the scene was full of passion enough to be called an acting contest. The acting breath created by Bae Seong-woo, Seong Dong-il, and Jang Young-nam added to the horror of <Transformation>.

Here, Kim Hye-joon, who performed well in the Netflix drama [Kingdom] and director Kim Yun-seok's <Underage>, plays the first Seon-woo. Kim Hye-joon was cast by director Kim Hong-sun, who had been eyeing audition videos for other films. Jo Yi-hyun was selected as the second Hyun-joo after a highly competitive audition. Even though it was his first feature film appearance, the way he was immersed in every scene and acted was said to be enough to put his tongue out even for senior actors. Kim Kang-hoon, who is most active among child actors such as the drama [Mr. Sunshine] and the movie [Exit], was cast as the youngest child, Woo-jong. The ensemble of child actors, one of the elements of a horror movie's success, is the result of the thorough directing of director Kim Hong-seon and the instinctive performances of the actors. The next generation of Chungmuro actors who will be called the discovery of the year when <Metamorphosis> is released are preparing.

The ultimate horror you can enjoy at the theater this summer!
Suspense to blow away the heat!
The box office formula that horror movies are summer specials has long since been broken. But still, many spectators are waiting for a horror movie worth seeing in the summer. <Metamorphosis> is a movie that has all the advantages of a season movie that fits the audience's waiting. <Transformation> is ready to take over the box office success of Korean horror films that have been loved by audiences by creating sensations such as <The Wailing> (2016) and <Gonjiam> (2018).

The main weapon of <Transformation> is the flow of the story in which the audience is lifted up and down with extreme fear. At the beginning of the play, the demon's existence is shown through an exorcism ceremony and invited to the world of fear, and then the tension is relieved for a while through the harmonious appearance of Kang Goo's family. . As the existence of a demon that transforms into a human form due to suspicion and anger among the family members gradually begins to emerge, the audience will feel an uncontrollable fear. Director Kim Hong-sun said, “It was important to make the story interesting so that people who like scary movies or people who don’t like scary movies can enjoy the movie. That's why it was directed without releasing the thriller element even though it was horror." He explained the special fun of <Transformation>.

The horror thriller <Transformation>, which is considered the most essential of the entertainment film genre, is ready for sortie as a season movie that can be enjoyed coolly at the theater this summer.