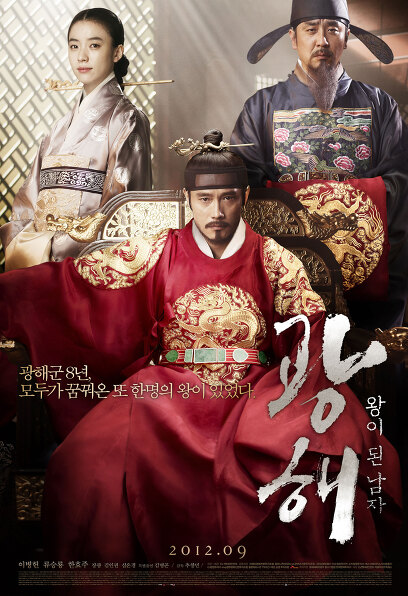 Another Gwanghae Unrecorded in History

The 8th year of Gwanghaegun's chaos due to power struggles and strife over the throne. King Gwanghae, who is becoming increasingly violent with anger and fear at those who seek his life, instructs Do Seungji 'Gyun Heo' to find a substitute who will be exposed to threats on his behalf. At this, Heo Gyun discovers Ha Seon, who was popular among the drunkards of Gibang for his thick comic talk. Ha Seon perfectly mimics the king with his innate talent and speaking skills, as well as the same appearance as the king. Ha-seon, who is taken to the palace without knowing the English language, becomes the king's double by tightening her chest overnight when Gwanghae-gun is away.

A man who shouldn't be a king becomes the king of Joseon!

Then, one day, Gwanghae-gun suddenly loses consciousness and collapses, and Heo Gyun orders Ha-seon to act as the king's substitute for Gwanghae-gun while Gwanghae-gun is being treated. Ha-seon, a common man who became the king of Joseon overnight from a mere comedian on the street. Under Heo Gyun's instructions, he begins to play a dangerous kingship, from speech to gait, to how to govern state affairs, even if he taunts his mouth. However, unlike Gwanghae, who was sensitive and violent, the court is a little fussy at the changed appearance of the king, where he can feel the warmth and humanity, and Heo Gyun starts to panic when he sees Ha Seon starting to speak his voice instead of the king's subordinate. .

Do not record things that should be hidden, it is too early
– Gwanghae 100卷 8年 February 28

The tyrant of the times, or the lord of misfortune
One king, two faces that history remembers

Gwanghae, the 15th king of Joseon, whose evaluations of the present and future generations are divided into extremes

The threat of assassinations and conspiracy everywhere made him a tyrant.
According to the Bisha (祕史), during the 15 years he was called a king,
For 15 days, he was a saint like never before.

Watching the safety of the lowest in the palace
He lamented that the people themselves had no choice but to become slaves and parasites.
Rather than defending the throne, he cares about people's livelihood

He was the king of the Joseon Dynasty.

“Do not record things that should be hidden, it is too early”
…
And in the Annals of the Joseon Dynasty, the records of Gwanghaegun's 15 days disappeared forever.

15 days lost in history
<Gwanghae, the man who became king>

8 years of Gwanghae-gun, the 15 days that disappeared
Revived on the screen in 2012
King Gwanghae, the 15th king of the Joseon Dynasty, was recorded in history as a tyrant who lived a more dramatic life despite his short reign of 16 years. However, as the recent reevaluation of the foreign policy of pragmatic diplomacy and the people's livelihood policy such as the Daedong Act, Gwanghaegun is being re-evaluated as a reform monarch, not a tyrant of misfortune. In this way, the first movie about Gwanghae, the king of the Joseon Dynasty, whose evaluations of the time and the present are divided into extremes, <Gwanghae, the Man Who Became King> is one of the Annals of the Joseon Dynasty, 'The Diary of Gwanghaegun'. It is a faction historical drama that reconstructs the records of the 15 days lost during the reign of Gwanghaegun with a bold imagination that started with the single line “It is too soon.”

A man who shouldn't be a king becomes the king of Joseon!
The king desired by the present generation in 2012! The crystallization of laughter and catharsis!
<Gwanghae, the Man Who Became King> forms a colorful story and unexpected fun through the process of becoming a real king, a man who cannot or should not be a king. Ha Seon, who used to be a satire of incompetent courtship and corrupt power, plays the king's double role in the palace where hundreds of people are watching, adding a setting that can't be seen or told by anyone, creating breathtaking fun and tension. evoke In addition, the process of learning the rules of the king, which he has encountered for the first time in his life, from the moment he opens his eyes to the moment he goes to bed, from the moment he opens his eyes to his government affairs, as well as the way he speaks and walks, brings unexpected laughter and fun with Ha-seon’s unique humanity and easygoing. to present
However, the moment Ha Seon, who was faithful to the role of the king's subordinate as Heo Gyun instructed, begins to speak out the real king's voice without knowing it, <Gwanghae, the Man Who Became King> enters a new phase. Unlike King Gwanghae, who was concerned only with his own safety and kingship, Ha Seon, who does not know what politics is, but knows what the path is for people and people, gives a timeless impression and lingering impression. Even though he accepted the 20 silver price and reigned as king for 15 days, based on common sense and humanism, Ha Seon, a common man, has a more dignified voice than any other king. <Gwanghae, the Man Who Became King>, which depicts the true monarch that Joseon needed by borrowing the image of the lowliest of power, is a refreshing catharsis that the present generation in 2012, who hopes and dreams of a true leader, can empathize and laugh together. will make you feel

World star Lee Byung-hun becomes the king of Joseon!
Lee Byung-hun's first historical drama, King vs. Cheonmin's perfect possession!
Actor Lee Byung-hun, who is the center of the Korean Wave and is playing an active role as a global world star, will try acting in a historical drama for the first time since his debut through <Gwanghae, the Man Who Became King>, and will perform two roles in one person. [All-in] [Iris], <Sweet Life> <The Good Guy, the Bad Guy, the Strange Guy> and <I Saw the Devil>, show a wide spectrum that goes beyond romanticism, rough masculinity, and attractive villains. Lee Byung-hun established himself as an actor. After successful entry into Hollywood with the blockbuster <G.I.Jo – The Beginning of War>, which recorded a worldwide profit of 300 million dollars in 2009, she was cast in <G.I.Jo 2> and <Red 2> one after another, and recently He further solidified his position as a world star by becoming the first Asian actor to have hand-printed prints at the Men's Chinese Theater in Hollywood, USA.

In this way, Lee Byung-hun, who has solidified his position as a representative actor in Asia that the world is paying attention to, presents the polar opposite in his first historical drama <Gwanghae, the Man Who Became King>. Gwanghae is in the king's position, but has lost his judgment and became a tyrant due to fear and fear of the people who want to harm him, while Ha Seon is a character with a natural sense of humor and easygoing. The character of Ha Seon, who has an assertive yet sensitive charisma and the wit and leisure characteristic of a comedian, was able to be completed as two contradictory characters with completely different presence by adding Lee Byung-hun's delicate and solid acting skills. Despite being his first historical drama, Lee Byung-hun, who showed a strong transformation of two roles, from the king of Joseon to the figure of a low-income earner, will once again represent Korea through <Gwanghae, the Man Who Became King>, the first Korean movie comeback since entering Hollywood. It will prove to be a star actor.

In <All About My Wife>, Ryu Seung-ryong, who achieved a box office of 4.58 million by showing off his unique comic acting as the legendary Casanova in <All About My Wife> ' took on the role. The character Heo Gyun in <Gwanghae: The Man Who Became King>, created based on real historical figures, is a modern person with free thoughts and innovative thinking in the image of a loyal loyalist who puts the king and the country first. Ryoo Seung-ryong completes the character Heo Gyun, a careful and astute strategist who can sometimes make bold decisions for the country into a more three-dimensional and attractive character, and leads the center of the play with Lee Byung-hun to a tense tension.

Han Hyo-joo, who has established herself as a representative actress in her 20s through [Dong Yi], [Brilliant Inheritance], and <Only You>, is expected to fill the screen with attractive power that combines dignified dignity and beauty by decomposing into ‘Jungjeon’, a woman loved by two kings. am. Jang Gwang, who showed the essence of a villain as the vicious principal of <The Crucible>, took on the role of ‘Jo Nae-kwan’, who sincerely helps him even though he knows the identity of ‘Ha Seon’ > 10 million actor Kim In-kwon adds tension and density to the decomposition play as the escort samurai 'Dobujang' who doubts the king. In addition, Shim Eun-kyung, the heroine of <Sunny>, takes on the role of 'Sawol-i', the 9th of Gwanghae-gun, showing her unique pure charm and explosive acting skills. Appearing and exuding charisma. In this way, the acting breathing and different charms of the representative actors of Chungmuro, who have not only acting skills, but also popularity and box office power, will captivate the audience as the best viewing point for <Gwanghae, the Man Who Became King>.