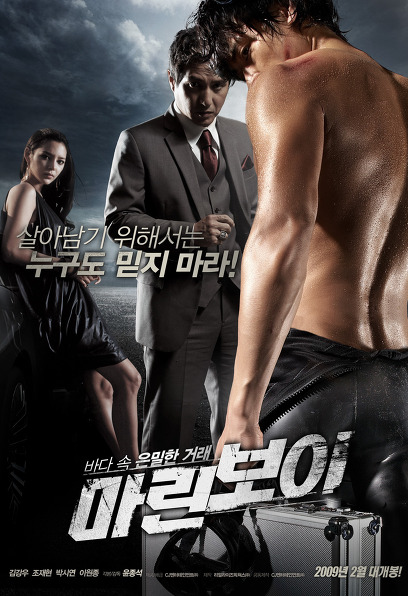 Cheon-su (Kim Kang-woo), a former national swimmer who owes billions of dollars in gambling debt while dreaming of a single life, has a survival rate of 0 % Trained as a 'Marine Boy'. An unpredictable bout begins when Yuri (Park Si-yeon), an attractive woman who wants to use two men in their dangerous transaction, and Kim (Lee Won-jong), a drug enforcement team leader, who wants to use Cheon-su as bait to catch the instructor, jump in without warning…

First, the drug is wrapped in plastic,
After weaving a long thread,
Swallow one by one.
Sometimes I get nausea and vomit.
It is said to be over 10 meters long.
When caught, they jumped into the sea without hesitation.
In the Korea Strait, in the sea off Hong Kong, in the Philippines…
But most never came back.

The 'Marine Boy' that everyone knows, but no one imagines
The most risky deal using the body and the sea takes place!
The movie <Marine Boy> introduces a completely new concept of 'Marine Boy' rather than the 'Marine Boy' we were familiar with. The word 'marine boy', which can hardly be related to crime, appears as a technical term for drug crime, which refers to a person who puts drugs in his body and swims around the sea. Among the drug transport routes that are evolving more and more professionally to avoid police crackdowns and investigation networks, the setting of 'Marine Boy' in the movie is surprising, but on the other hand, it is also a clever way to rethink the possibility of its existence. . Despite the fact that many films dealing with the subject of 'drugs' have appeared in the meantime, the setting of using the body of a former national swimmer to trade drugs through the sea is a very shocking yet refreshing change of thinking. The unpredictable reversal and the unpredictable reversal of a Marine Boy with a survival rate of 0%, who will never survive even if they succeed in a material that no one could have imagined, will never survive even if they succeed in a dangerous mission.

Underwater action in the Korea Strait and Cebu sea, large ships, luxury yachts, etc.
A new style of crime movie set in the sea is born!
<Marine Boy> is expected to continue the success story of box office success this winter with an upgraded work that inherits the evolving genealogy of Korean crime films such as <Reconstruction of Crime> and <The Chaser>. <Marine Boy>, which unfolds in the background of the sea, is an entertainment visual that has not been seen in Korean films so far, and it is expected to take a step forward in genre films. <Marine Boy> has been the most popular film in Korean crime movies, including the action in the sea completed through the first and largest underwater filming in Korea, such as the endless horizon and the tension-filled crimes unfolding on a yacht leisurely floating on it, and a location in the Philippines. It will provide a completely new and splendid sight that has never been seen before. The spectacle expected from the story of a secret transaction unfolding in the vast ocean, the suspense of an unpredictable space, and the breathtaking reversal code expected from a crime movie, <Marine Boy>, which will be completed together, is the curiosity of the audience. and will be remembered as a new challenge for a different level of Korean crime film.

The hot transformation of the three actors
A battle without concessions of intense characters heats up the screen!
Jo Jae-hyeon, the protagonist of the drama 'New Heart', Kim Kang-woo of <Food Eater>, and Park Si-yeon of <Love> selected <Marine Boy> as their next work following the success of their previous work. going to surprise them. Actor Jo Jae-hyun, who most perfectly plays two opposite characters of good and evil, abandons his soft image for the character of the instructor who puts Kim Kang-woo in danger, and is armed with a cold and impeccable charisma. Kim Kang-woo, who risks his life against him and transforms into a marine boy with a survival rate of 0%, takes off his exemplary image and plays a character with a reckless game-winner temperament. For this character, Kang-woo Kim is expected to capture the attention of female audiences with a sexy and masculine charm that has never been shown before by completing slick muscles through intensive swimming and weight training before filming. Park Si-yeon, who is rapidly emerging as the best femme fatale of this era, is also a glass character that captures Cheon-soo at a glance, demonstrating her sexiness to the fullest, heralding a hot winter. Her secret character, which forms a tight tension between the two men with seductive eyes and gestures, will be Park Si-yeon's most spectacular transformation.

<Beauty is Painful> Meeting with Realize Pictures and a powerful new director
It heralds the essence of a flawless, well-made genre movie!
Realize Pictures, the production company of <Beauty is Suffering>, which attracted a total of 6.6 million spectators in the winter of 2006 and drew attention with the birth of a new blockbuster film. The fact that <Marine Boy> is an ambitious film that opens 2009 by Realize Pictures is enough to raise expectations for the fun and completeness of the movie. <Marine Boy>, completed with the fateful meeting between Realize Pictures, which catches two rabbits, and director Yoon Jong-seok, a talented rookie from the Korea National University of Arts, does not rely solely on star-level actors, but perfect planning and differentiated material, It is foretelling the birth of a clever genre film that throws the number of wins with the perfection of the film. The new challenge to the space called 'the sea', which is still barren in Korean movies, and the craftsmanship of the talented production team added to this will make <Marine Boy> be remembered as a well-made topic that will decorate splendidly this winter.